It’s Star Trek Day and Paramount+ is celebrating with a virtual event that looks 55 years into the past while also celebrating the present and future. During the TCA Summer Press Tour, the producers of the upcoming animated series Star Trek: Prodigy joined forces with members of the voice cast to reveal some new information about the series. It seems like there’s no better time than Star Trek Day to look ahead at this exciting new series, which launches this fall on Paramount+.

“It had to be something that spoke to Trek fans so they can watch it with their kids,” executive producer Heather Kadin shared about the goal of creating an all-ages Star Trek project. “It's not a kid show… We have been able to push that envelope so that the show can appeal to kids and bring them in, but really, I mean, I love watching the show. And I know I made it, so I'm a little biased. I think it really will appeal to a wide berth of people and generations, old fans and new.”

Part of the vision of Star Trek: Prodigy is also to secure the future of the brand. “Star Trek is about so many things that are formative,” explained Alex Kurtzman, executive producer. “The idea that our best selves will emerge in the future, the idea that our better angels will lead us to an optimistic place where all the things that divide us now are gone, are in the rearview mirror. What I love so much about Star Trek is that each generation that finds it keeps finding that message again and again. So we felt that at this particular moment in time, to bring that message to young kids who are going to be not only the ones who inherit Star Trek, but who inherit our planet and the choices that we're making going forward, it just felt like the perfect time to bring it to them.”

Although a new show and a perfect entry point into Star Trek in general, there’s a lot of fan service to be found. “This story begins in the Delta Quadrant,” Dan Hageman revealed. “It's about these kids making their journey to the Alpha Quadrant. So they're getting closer and closer to Starfleet. There may be some characters that they may come across from Star Trek: Voyager, but there are also other characters out there in this greater world that Gene Roddenberry created.”

The context in which Star Trek: Voyager came up was because of the inclusion of Janeway, albeit in hologram form. “We knew right away when we were coming up with the concept these kids needed a hologram adviser,” Kevin Hageman added, Dan’s brother and producing partner. “There was no one better than Janeway who could do this. I mean, she had a wayward crew, and she traveled to the Delta Quadrant, so she's the perfect living example, the perfect tough-love adviser that these kids need.” 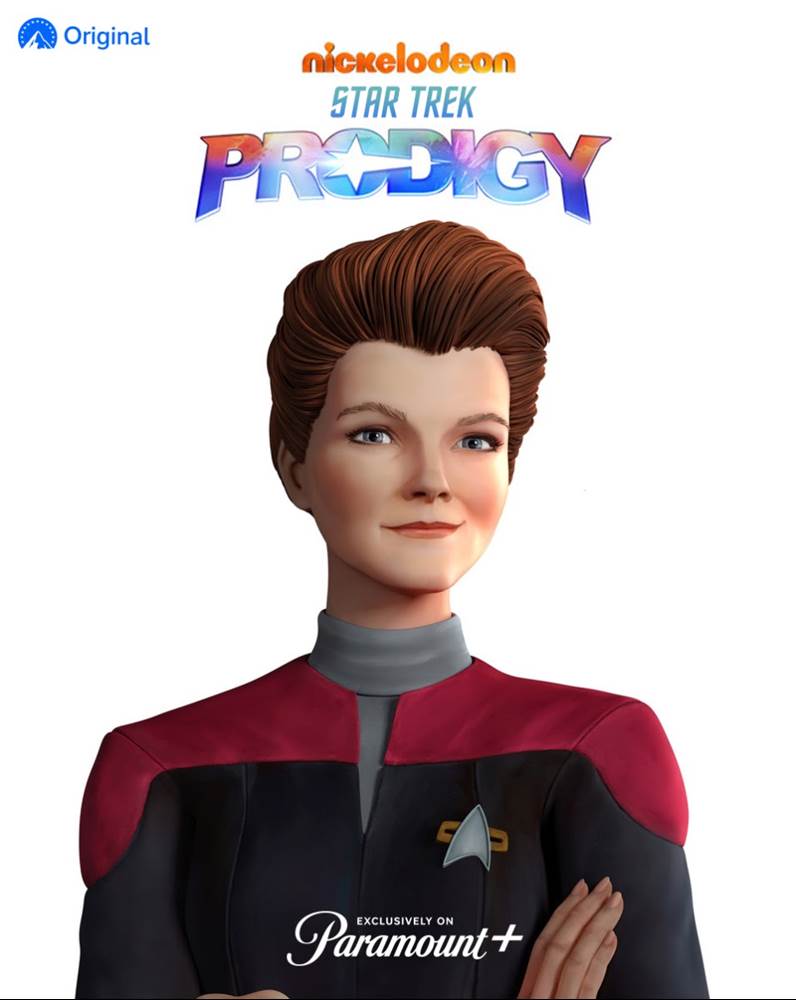 Janeway’s holographic inclusion in Star Trek: Prodigy allowed actress Kate Mulgrew to return to Star Trek after 15 years away. “Janeway defined an era for me, and as it turns out, the rest of my life,” the actress stated. “To play a hologram I think is probably the cleverest way to introduce this character to children. Our demographic isn’t yet entirely or thoroughly explored, and I think to introduce hologram Janeway to 5-year-olds, 10-year-olds, 15, is I think an exciting approach and very smart. From there, of course, the sky is the limit, but I am delighted to be back playing her. I love her. When a character defines a part of your life, you are in turn deeply grateful, which I am. And she has never left me. And I am thrilled to be back and to be introducing this to children.”

During the press tour, Paramount+ debuted the opening titles with a score by Michael Giacchino and also teased the villains of Star Trek: Prodigy. “You've seen his silhouette in this mysterious tank,” director Ben Hibon shared about The Diviner, alluding to the fact that we’ve barely seen anything of him yet. “He's being kept alive in this structure. He literally is a very, very faint silhouette and figure you see within the tank. There's a lot more to be revealed about this character.” Voicing The Diviner is John Noble, who revealed about as much as he was allowed to. “The Diviner needs [Drednok], but it feels like, to me, Diviner still has the authority role and plays it,” he explained about his relationship to the other villainous character teased during the day.

“I think in terms of Drednok, we wanted this towering, very ominous, very also mysterious in its technology, in its fabrication,” Ben Hibon shared. “Having a great contrast between is his very impressive, imposing look, very austere like this. Jimmi [Simpson] is very, very subtle, very measured, and creates a great contrast between the two. He's towering over everyone. This is a very enigmatic character.” As towering as Drednok may look, he’s actually more of a servant to The Diviner. “He's kind of like Maximillian in The Black Hole,” Jimmi Simpson shared about his character. “He was a bit more verbose, crossing maybe Maximillian with Howell. And yet he has one goal in his robot life, and that's to serve The Diviner.”

“This series, it's all based around this mysterious ship and this relationship of The Diviner, and why he wants the ship,” Kevin Hageman revealed. “That's the whole big crux of the entire season.” The Diviner also has his roots deep in the Star Trek canon. “We were inspired by Montalbán and the character of Khan, and just the full of emotion. And that's why John Noble is this wonderful voice to give that.”

You can bet that the producers and cast were asked some very specific questions in an effort to get more information about the series, but everyone was carefully tight-lipped. “Let's just say our show has a lot of wonderful mystery and you can't enjoy the mystery if you can't wait for the surprises that are going to happen in the show,” Kevin Hageman concluded. Star Trek: Prodigy doesn’t yet have a premiere date, but it will be streaming exclusively on Paramoun+ sometime this fall. In the meantime, the original classic Star Trek series is rated PG and there’s also the 1970’s animated series, rated TV-Y7, for fans who don’t want to wait to introduce the world of Star Trek to their own next generation.