The series, renowned for twisting well-known Disney stories and giving them alternate taglines or driving plot points to their traditional Disney counterparts, invites readers on an all-new adventure alongside classic characters they know and love. The real intrigue of these stories is that they indulge in darker fairytales which perhaps target a slightly older (middle grade and up) audience. 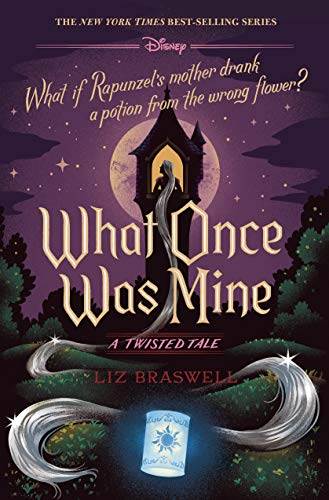 What Once Was Mine is the twelfth book and newest addition to the series (a full list of the books in this series can be found at the bottom of this article). Written by famed A Twisted Tale series author Liz Braswell, Rapunzel’s tale stays close to the original story framework and vibe of Disney’s Tangled, and yet adds an arguably even more adventurous – and certainly darker – touch to the story. Original (and even historically-inspired) characters are a welcome addition and perhaps my favorite part of the story involves a fun twist on none other than Maximus, the Corona Kingdom Guard’s most faithful steed.

What if Rapunzel’s mother drank a potion from the wrong flower?

The Twisted Tale series is known for its unique taglines that get curious readers thinking about what twist the tale might take. The taglines reel the reader in, for they will surely want to know
“What if Rapunzel’s mother drank a potion from the wrong flower?” After all, we know what happened when Rapunzel’s mother drank from the right flower: Tangled, of course. The twist in Braswell’s latest tale goes a little something like this…

Desperate to save the life of their queen and her unborn child, the good citizens of the kingdom of Corona comb the land for the all-healing Sundrop flower to cure her… but someone mistakenly picks the blossom of the Moondrop instead. This shimmering flower heals the queen and she delivers a healthy baby girl – with hair as silver and gray as the moon. But with her mysterious hair comes dangerous magical powers: the power to harm, not to heal. For the safety of the kingdom, Rapunzel is locked away in a tower and put under the care of the sinister goodwife, Mother Gothel.

For 18 years Rapunzel stays imprisoned in her tower, knowing she must protect everyone from her magical hair. When she finally decides to leave the only home she’s ever known – to see the floating lights that appear each year on her birthday – she gets caught up in an unexpected adventure with two thieves: a would-be outlaw named Gina, and Flynn Rider, a rogue on the run. Before she can read her happy ending, Rapunzel learns that there is far more to her story, her hair and her future than she ever could have known.

What Once Was Mine is darker than its predecessors

The dark themes in this book are particularly striking compared to earlier novels in the series. This is largely thanks to the involvement of Countess Bathory who is in fact based on the infamous Hungarian noblewoman and serial killer. In real life, Bathory is rumored to have bathed in the blood of virgins to retain her youth. In What Once Was Mine, this fact is shared with Rapunzel who spends some time in Bathory’s castle. Bathory is a fun albeit surprising addition to the story.

Another darker theme transpires through Rapunzel’s “murder hair” and its power to harm rather than to heal. (It is also an intriguing moon silver color rather than the sunshine gold locks we are familiar with in the film.) Baby Rapunzel accidentally kills a nurse and thus she is whisked away to her tower under Gothel’s care. Later in the story, Gothel forces Raps to kill a chicken to remind her why it is not safe for her to leave the tower. If murder isn’t dark enough, coercion to kill certainly is. While this sounds particularly grim for our protagonist, it triggers an interesting journey in seeing how Rapunzel learns about and uses her magic – thanks to her friends and one very kind and quirky witch.

This Twisted Tale is arguably more adventurous, layered, and mature than the Disney film

While there are relatively few major plot point differences between What Once Was Mine and Disney’s Tangled (Rapunzel is still a girl in a tower with magical hair dreaming of a great escape to see the floating lights), there is a greater sense of adventure, personal discovery and more characters to love in Braswell’s book. This is largely what makes it worth reading for any Tangled fan. There is a more detailed forest adventure sequence and, as all great books adapted from films (and vice versa) should do, the relationships between key characters are further explored. An interesting shift in character dynamic is also added with the introduction of Gina who transforms the Raps-Rider dynamic duo into a fun-loving trickster trio.

Another interesting aspect to this book is that it captures a story-within-a-story. The “outer” story is a young boy is telling his sister his version of Rapunzel’s tale while his sister is receiving cancer treatment in a hospital. The “inner” story is Rapunzel’s tale. The epilogue tells us that both outer and inner stories were inspired by the author’s younger sister who survived cancer. Braswell explains that following treatment, her sister opted for a silver wig which was complimentary to Games of Thrones’ Khaleesi’s style. Thus, Raps’ silvery locks were born, which makes for a special, deeply personal connection between author and story.

What Once Was Mine satisfies the series’ demand for a mix of young adult and adult themes to keep fans of all ages interested and involved. Pearls of wisdom abound (“[y]ou can’t step into the same tower or goat farm twice; for it is not the same goat farm or tower, and you are not the same person”) and Braswell’s contemplative storytelling is complimented by typical themes like teamwork, friendship, and pursuing unrealized dreams. Interesting questions also arise from ideals of motherhood and power that were left comparatively untouched by the Disney film.

The twelfth Twisted Tale proves that the series continues to soar

What Once Was Mine is a worthy and compelling twelfth addition to the New York Times Best-Selling series. A Twisted Tale fans will not be disappointed, and I expect that Tangled fans will be pleasantly surprised by the magic Braswell weaves in this book.

For newcomers, please check out the below list of books in the series to date. Note that there is no narrative connection or continuation between each of the books, so they do not have to be read collectively or sequentially to be enjoyed. As standalone stories they shine and this is thanks to Disney, the authors, and the enchanting twists therein.

Books in Disney’s A Twisted Tale series so far:

1) A Whole New World (by Liz Braswell, based on Aladdin)

2) Once Upon a Dream (by Liz, Braswell, based on Sleeping Beauty)

3) As Old as Time (by Liz Braswell, based on Beauty and the Beast)

4) Reflection (by Elizabeth Lim, based on Mulan)

5) Part of Your World (by Liz Braswell, based on The Little Mermaid)

6) Mirror, Mirror (by Jen Calonita, based on Snow White and the Seven Dwarfs)

7) Conceal, Don’t Feel (by Jen Calonita, based on Frozen)

8) Straight on Till Morning (by Liz Braswell, based on Peter Pan)

9) So This is Love (by Elizabeth Lim, based on Cinderella)

10) Unbirthday (by Liz Braswell, based on Alice in Wonderland)

11) Go The Distance (by Jen Calonita, based on Hercules)

12) What Once Was Mine (by Liz Braswell, based on Tangled)