When we last saw the residents of The Arconia, Mabel had just left the building and was being pursued by someone in a tie-dye hoodie. Oliver and Charles had a bomb dropped on them when they found out that Mabel was friends with Tim Kono as a child, learning this not from her, but from Oliver’s son Will. It left viewers in suspense for a week, but the wait is over with the arrival of the fifth episode of Only Murders in the Building on Hulu titled “Twist.” 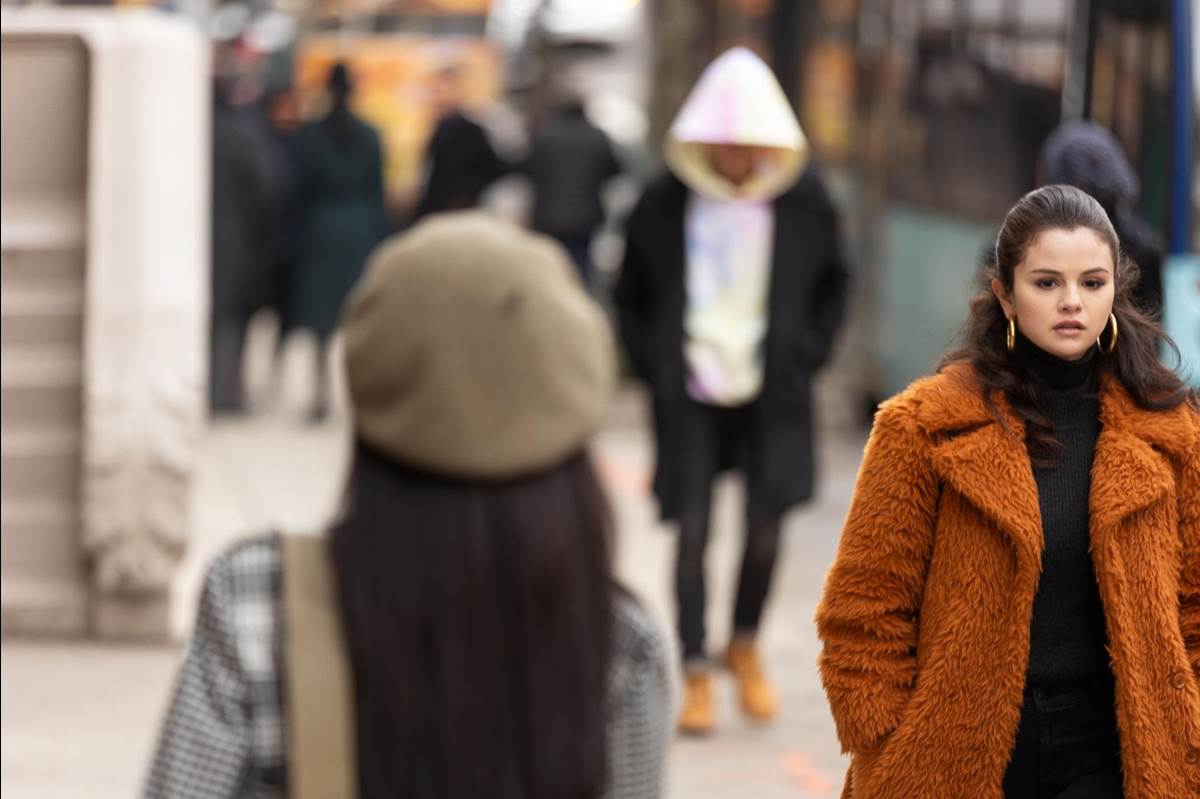 The introductory narration is provided by a new voice, whoever is following Mabel as she walks along a New York City street in her fuzzy yellow coat. She turns down an alley to check if she is being followed, pulling a sharp knitting needle from her purse and turning around to lunge at her pursuer. But she quickly recognizes the elusive tye-dye guy, her old friend Oscar who was just released from prison. He tells Mabel that he’s been trying to see her and she tells him about the time she spoke with his father, who asked her not to speak with him. Mabel tells Oscar that she was on her way to New Jersey and he announces that he is going with her.

Oliver and Charles are on their way down the elevator to look for Mabel to confront her about her lies. Oliver uses his phone to narrate the web of deception she has spun, going as far as the suggest that Mabel is Tim Kono’s killer, a claim that Charles argues with him over. As the two men emerge from The Arconia, they see Mabel getting into a car and Charles recognizes the tie-dye hoodie her companion is wearing.

Acting in the heat of the moment, Charles begins to follow Mabel’s car on foot while Oliver goes to retrieve his car from the parking garage. Charles was shocked to find out that Oliver even owns a car, let alone pays for parking in the city, and soon finds that he will be driving because Oliver’s license expired twenty years ago. The car is a yellow and mustard-colored relic named “Aphrodite” that Oliver received as a gift for directing Singin’ in the Rain 2 for VH1. Aphrodite makes some concerning noises as they set off on the freeway, following Mabel to New Jersey.

In the car with Oscar, Mabel learns that the night Oscar got out of prison was the same night that Tim Kono died and she connects the dots, realizing that he’s the tie-dye guy that Charles saw going up the stairs during the alarm. Oscar tells Mabel that he was on his way up to see her and that she was the second person he wanted to see after his dad. Mabel tells him it’s weird that they didn’t pass each other in the stairwell. Oscar tells Mabel that he’s seen her around the building since that night with two older men, recognizing one of them to be the actor famous for playing Detective Brazzos.

Charles and Oliver discuss what could be going on with Mabel as they follow her, Oliver recording the conversation for the podcast. Charles thinks Mabel is in trouble and tie-dye guy has abducted her. Oliver thinks they’re partners in crime, referencing the events of a true-crime podcast called “Daddy’s Little Helper” that they both agree had a terrible title because it gave the killer away. Charles has a memory of Mabel pulling “Tie-Dye Guy” off the suspect board and telling him to forget about him, which makes him question if Oliver’s theory is right. He tries to call Mabel and the number goes directly to voicemail. On his phone, Oliver finds an article about Zoe’s death a The Arconia from 2010 and reads it aloud. Charles calls Mabel again and this time the call goes through. Mabel answers and lies to Charles, saying she’s at a park and that she’s “Just chillin’.” Charles still thinks she’s in trouble and that she simply can’t say that with an abductor present.

Oscar asks Mabel if the call was from her boyfriend and learns that she’s single. Mabel shows him the Post-It note she found in Tim’s apartment and tells him they’re heading to “Montrose Gems.” Oscar pulls up his sleeve to reveal that he has the same whale tattoo that Mabel has on her shoulder (revealed in the first episode and the Post-It was found in a The Hardy Boys book called “Mystery of the Whale Tattoo”). It turns out that all four of Mabel’s Hardy Boys got the same tattoo from her cousin, Gustavo Mora, and that his parlor is on Shore Road. She can’t believe she didn’t think of that first and quickly veers off the next exit of the freeway.

Charles and Oliver were passing the time by improvising a song called “Saggy Bottom Balls” when Mabel’s car suddenly exits and they pull off the freeway. Aphrodite’s hood starts smoking as they follow Mabel into a gas station parking lot. She and her tie-dye hoodie friend go inside the convenience store while Oliver suggests he add a little diesel fuel to the tank. Charles gets recognized by a Brazzos fan who knows enough about cars to caution them not to continue driving Aphrodite. His name is Lucien and he offers to help them tow their car to be serviced. Seeing Mabel and Oscar emerge and get back into their car, they instead ask Lucien if he can drive them to follow their car. He agrees, his friend riding shotgun as Charles and Oliver get in the backseat.

The side of Lucien’s white SUV has a logo for “Yarddogs” on the side and as Oliver brags about their podcast, he and Charles learn that the two men are the hosts of a podcast called “Yarddogs: The Horticulture Homies” (the car is full of plants, with Charles having to hold a potted cactus during the ride). Oliver tries to add some credibility by name-dropping Cinda Canning, only to learn that Yarddogs is part of her podcast empire. While following Mabel’s car to Bayport, the Yarddogs co-host suggests that Mabel simply doesn’t trust them, with Lucien comparing Mabel to mistletoe, a poisonous plant that people love.

Mabel and Oscar pull up outside of the tattoo parlor and Oscar tries to convince Mabel not to go inside, saying that he would like to go get ice cream. Mabel tells him that it’s important for her to know what Tim was up to when he died, telling Oscar that she will take a train home and saying goodbye as she goes inside.

Mabel is furious when she sees Charles and Oliver enter the tattoo parlor, angry that they followed her. They confront her about lying about knowing Tim Kono and she comes clean about everything, apologizing for not being honest. Oscar walks in with a handful of prepackaged ice creams and has a fanboy moment over Charles, confessing that “Brazzos” was one of only three DVD sets he had access to in prison (Oliver says “Prison sounds like hell”). Finally having a moment with tie-dye guy, Charles asks Oscar where he was going the night Tim died and Oscar now gives a different story to the one he told Mabel. He was, in fact, on his way up to see Tim Kono and confront him, possibly beat him up, but as he approached his apartment door, he heard a gunshot inside and ran.

A tattoo artist named Tavo comes out of a backroom and overhears the conversation, shocked to hear that Tim Kono was murdered. He reveals that Tim was working to take down a black market jewelry dealer, which confuses Oscar, Charles and Oliver. Mabel dumps out her purse on the coffee table in the waiting room, which was full of the jewelry she found in the hollowed-out books in Tim’s apartment. They all look at each other, contemplating what their next move should be.

Only Murders in the Building will return on Tuesday, September 21st with “To Protect and Serve.”