American Horror Story: Double Feature continued this week with the next step in its vampire story. The fifth episode, titled “Gaslight,” sees a return to the home of the Gardners who are now trying to adjust to their new lives and the arrival of their new baby. 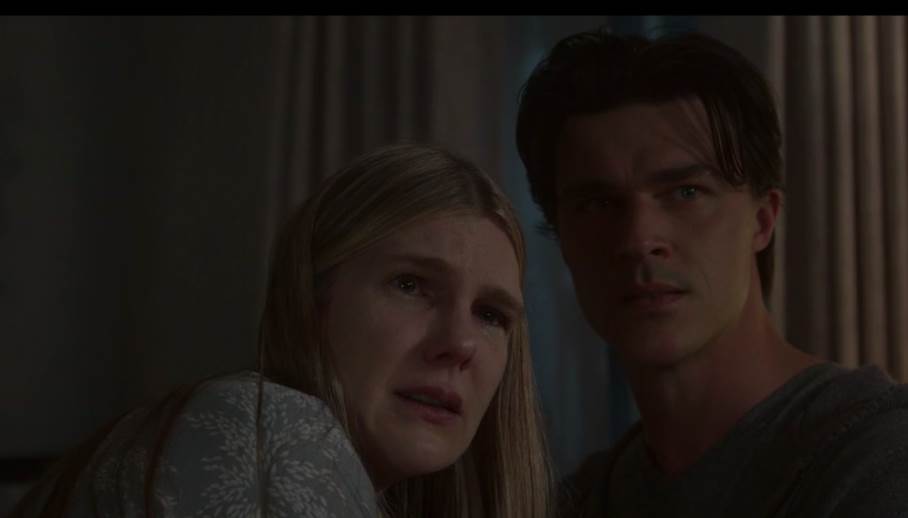 The episode opens with Harry by Doris’ side as she gives birth to their second child. While taking in the moment, Harry is visibly overtaken by his urge to drink blood but he restrains himself. After the birth, with Doris asleep, Harry sneaks into the bathroom with the wastebasket full of used, blood-soaked towels. He rings them out into cups and drinks the blood in what has to be the most disturbing and disgusting opening to an episode so far this season.

Doris wakes up in the family’s P-Town home, with the baby safely at her side. However, when she wakens from her daze, she realizes they’re not supposed to be there anymore and begins to panic. Harry calms her and says this is the best place for them.

Elsewhere in town, Mickey pulls up next to Karen in a new sportscar. Karen clearly still disapproves of Mickey taking the pill but she eventually allows him to give her a ride in the car. Mickey reveals to her that he got a huge deal for movies and more and he wants her to be by his side for all of it. He offers her a pill but she refuses and forces him to pull over and let her out.

Back at the Gardners’ house, Doris wakes up in the middle of the night to the cries of her new baby. At this point, you get the sense that something horrible is eventually going to happen to the child. Doris walks to the bathroom to find Alma feeding on her new brother’s leg. It didn’t take long at all for that plot point to reveal itself. Doris faints from the horrifying sight.

The next morning, Harry scolds Alma for feeding on her brother. She assures him that it was “just a sip” but eventually agrees never to do it again. She also reiterates her desire for her and her father to leave her mother behind. Harry tells her again to never say that.

Doris wakes up to find Ursula by her side, with the baby also safely next to her. Ursula gives her some soup and assures her that what she saw was just a dream. Doris protests but eventually calms down. Ursula tells Doris she should “be on her best behavior.”

After a montage of Alma playing violin, her and Harry feeding and Doris feeding the baby while crying, Alma enters Doris’ room to bring her pills. While examining the pills, Doris finds one of the little blck pills and questions Alma. She creams for Harry, who enters confused. Doris show Harry the bite marks on the baby and yells at him to stop lying to her. In that moment, Alma reveals everything to Doris. She tells her about the pills and that she fed on the baby. She also tells her she just wants her to take the pill so she can be like them.

Harry refuses to allow Doris to take the pill while Alma and Ursula challenge the idea of whether or not she has the talent that would allow the pill to make her better and not turn her into one of the pale people. Doris takes the pill and a glass of water from Alma, but throws both on the ground. She grabs the baby and tries to run but she is quickly surrounded by pale people. Harry arrives to save her and brings her home. At this point, you really get the feeling she’s eventually going to take the pill and things won’t turn out well for her.

On the beach, we see Karen painting when Belle approaches. Belle tasks Karen with stealing the Gardners baby so she can feed on it. Karen refuses, saying she’s done doing these terrible things for her. Belle threatens her, but eventually leaves her alone. 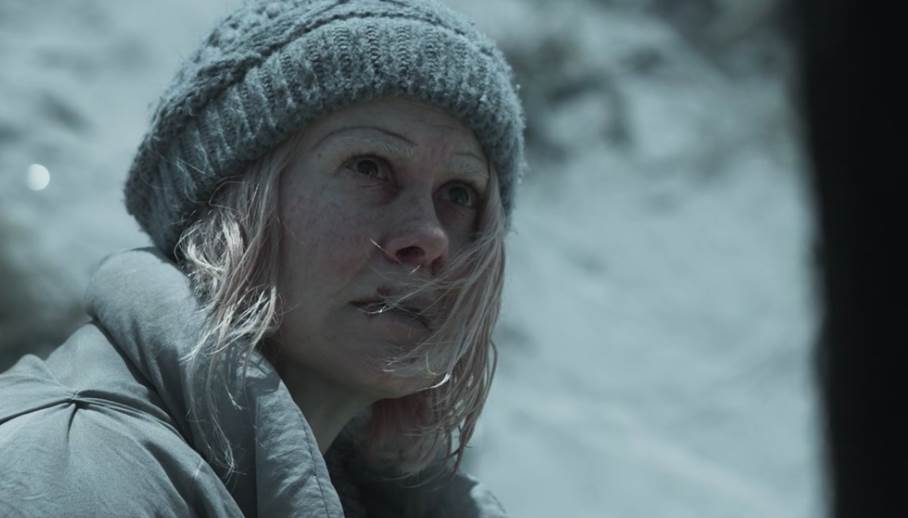 Doris wakes up and grabs a pair of scissors, seemingly to attack her family. She walks downstairs to find Harry talking with Holden, the designer, who is viciously insulting her design choices. Yeah, the pill definitely won’t work for her. Harry convinces her to go back upstairs to feed the baby.

Karen comes to Mickey for help and explains Belle’s threat. Mickey tells her to do what Belle says but Karen explains her plan is to steal the baby and care for it herself. Mickey doesn’t seem to think this will help her, but eventually agrees to help his friend.

Alma sits by her mother’s side and asks her what they’re going to name the baby. Doris manages to get out the name Eli before she breaks down over what she considers to be the loss of her family. Alma assures her it doesn’t have to be lost if she takes the pill. This time, Doris agrees and takes one of the black pills.

Another montage sees Alma playing her violin while Doris works on her designs. After a few seconds though, it’s clear that Doris’ work isn’t going so well. Another plot point that seemed as though it was being set up for the future, is now playing out already as it becomes very clear the pill is going to turn her into one of the pale people.

Harry, Alma and Ursula go out for dinner, leaving Doris asleep in her bed. At that time, Mickey and Karen break in on their mission to steal the baby. Doris wakes up and stumbles to the bathroom. When Mickey and Karen get to her room, they find that much of her hair has fallen out, which sends Karen into a panic.

Karen runs out into the street and is quickly surrounded by pale people. Mickey arrives just in time to save her but lets her know that he is going to leave her there with a pill. All she has to do is take the pill to save her own life. She refuses again, but when Mickey leaves her and the pale people begin closing in, she takes the pill and they immediately back off.

Seeing what is happening to herself, Doris decides to shave off the rest of her hair. She becomes distracted though by the sound of Eli’s heartbeat. She grabs a knife and goes after the baby but Harry arrives just in time to stop her. When he sees what has happened to his wife, he appears heartbroken but has not choice but to lock her in the bathroom. Unfathomably, he uses a dresser to block the doors, which we just saw open up in the opposite direction. The scene makes it quite clear that this should not work, but sure enough it does. I guess the hope is just that viewers aren’t really paying attention.

Distraught, Harry asks out loud why she would have taken the pill and Alma tells him she gave it to her. He sees his daughter standing in the door with Ursula as both of them explain that this needed to happen because Doris was only going to hold them back.

In Mickey’s shack, Karen is panicking because she took the pill. Mickey calms her down and tells her to picture her dream painting. He then tells her that this painting can be her new reality, but first she will need to feed. Karen seems to be on board, but it seems pretty clear she is really hiding another plan. 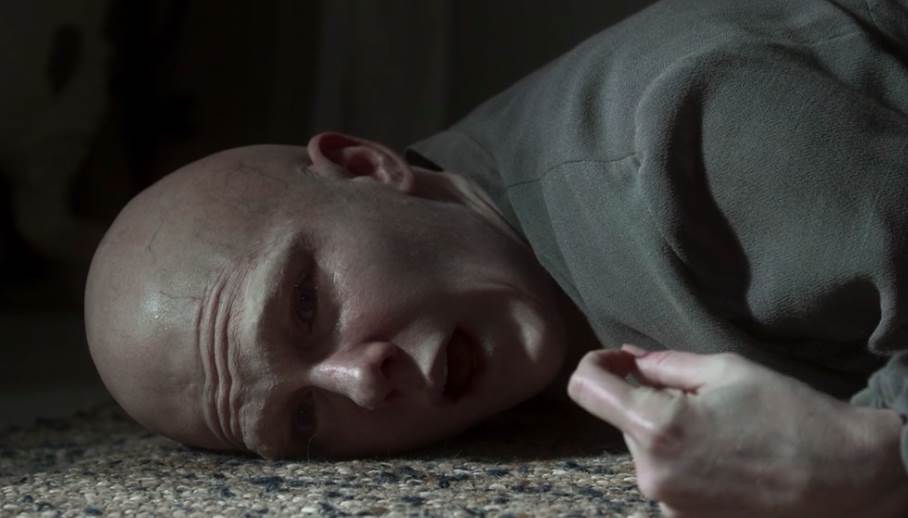 Harry sits outside of the bathroom where Doris, now fully a pale person, is trapped. He tries to justify what has happened by telling her this might have been less painful for her because he was eventually going to leave her anyway. He lets her out of the bathroom and leads her outside, where she wanders off into the town just like all of the other pale people.

Mickey and Karen arrive on the beach where Mickey points out a victim on which they can feed. The two embrace and, after a second, Karen bites out his neck, leaving him to bleed out on the beach. It didn’t take long for her other plan to play out. She then sits next to Mickey’s body and paints. When she’s finished, she walks to the water’s edge, cuts her wrists and walks out into the ocean to die.

Finally, Alma and Ursula walk through town at night as Ursula explains that they are on their way to see the Chemist so she can pick up a supply of the pill that will allow her to become the Los Angeles distributor. As they walk, they see Doris in the graveyard, feeding on a rabbit. Alma is unphased by the sight of what her mother has become, which visibly delights Ursula as the episode comes to a close.

It appears it’s about time for this season of American Horror Story to come to a close. With one episode in the first of two stories remaining, the show has used up a number of storylines that should have been saved for a finale and is now completely devoid of any likeable characters. In addition to its rushed plot and the continuous excessive gore, the lack of attention to detail is laughable. Luckily, a new story will be starting in a couple of weeks as this one will be wrapping up.