Follow Your Heart: The Message of NBC’s “Ordinary Joe” Tracking 3 Different Choices from the Same Character

Have you ever been caught at a crossroads in life? In the new NBC drama Ordinary Joe, audiences will explore three divergent paths for Joe Kimbreau, who becomes a cop, a nurse and a rock star in three different timelines. “It's all a real world, none of them are a fantasy,” actor James Wolk revealed at the TCA Summer Press Tour about the three versions of the same character he plays. “I don't think there is a right way that Joe should have gone. In fact, I know there isn't. There's just life that happened. It's playing with the idea that he married one woman in one life, he married another in another life, he didn't get married in the third life. And none of those lives are better than the other; they're just the way that life played out for him.” 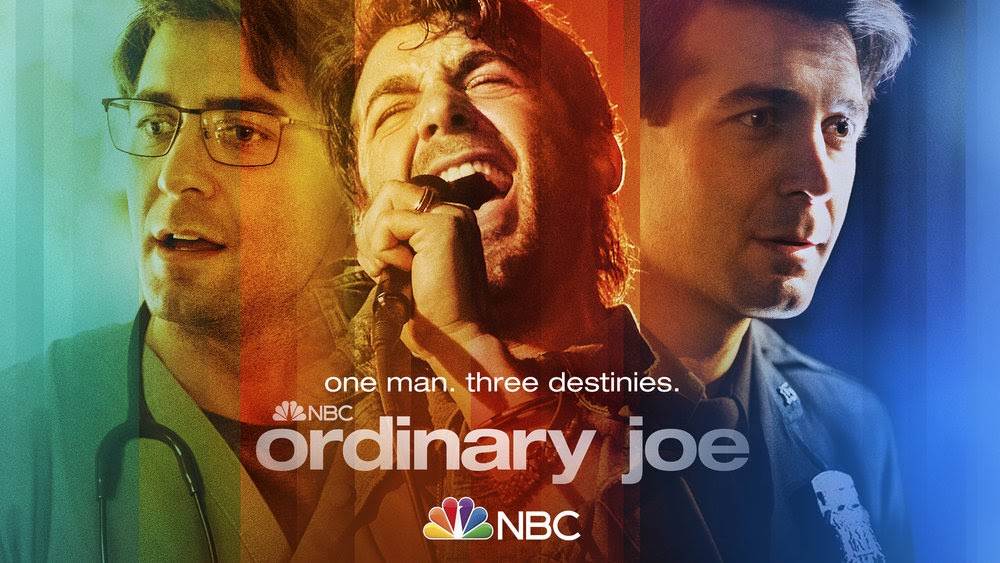 While Ordinary Joe is kicking off the fall 2021 TV season on NBC on September 20th, the idea has actually been ruminating for over a decade. "Ordinary Joe was originally written in 2008 by Matt Reeves, a wonderful storyteller and filmmaker,” executive producer Garrett Lerner explained about the shelved project. “We met with Matt and he said it was something that was very personal to him in 2008, and he encouraged us to make it very personal to ourselves, and to make it our own as we updated it.” The producorial team listened, infusing the project with bits and pieces of their own lives. From executive producer Russel Friend, Joe is a huge fan of Billy Joel because Russel grew up on Oyster Bay, Long Island. “Nurse Joe's son, Christopher, is in a wheelchair and he has the same disease as Garrett's son does,” Russel added.

With each episode following three different versions of the same characters, the cast confessed to sometimes getting mixed up. “Sometimes when we're working, we're like, ‘Wait, where did we just come from? When was the last time we saw each other?’” Natalie Martinez plays Amy Kindelán, one of the women in Joe’s life who is also married to him in one of the timelines. “The other day, we were doing something where we crossed the dating and married world… We forget who's what, sometimes, but we're all in it together and we all really enjoy reading these scripts and knowing all our characters. So everyone has to chime in and help us out.” Charlie confirmed that teamwork makes the dream work with this cast, supporting each other through these moments of timeline confusion.

Timeline confusion wasn’t just a concern for the cast, but also the audience. “We were just having nightmares about a test audience,” Russel Friend said, explaining that the team worked hard while editing the pilot to keep the timelines easy to follow, but some pre-planning helped make sure that didn’t happen. “Each world has its own color, and that helps with the transitions from world to world. And, also, some of the transitions are scripted… Wome of them we found in post. Score or original music helps… The split screens, a lot of that stuff we found in post and it was used for these transitions to make sure that we're, basically, making it super clear which world we're in because we know it can, obviously, get very confusing.”

“I truly believe that our producers and our writers have our best interest at heart when they're writing this, when they're scheduling this,” James Wolk explained about attempts to group timelines together. “Due to production constraints, it's really hard to be able to just shoot straight through all Music Joes, all Cop Joes, all Nurse Joes, for the simple matter of, you have an amazing location that can double as a therapy session in the Nurse Joe world, but it could also double as the lobby in the Music Joe world. And this is a beautiful location and you have it for a day, then inevitably, you're going to start having days where you're doubling up on characters. It's just par for the course.”

Making quality television is never easy and while Ordinary Joe is a challenging production, the cast and creative team hope the message of the series is meaningful for viewers. “What it shows us is that there is no right or wrong choice,” Natalie Martinez shared. “Every choice that we make in life leads us into a certain path or direction. It's what we do with that. And the other thing I love about this is that it also shows you that it's never too late to change course. You could go off on one path, and it's okay to change your career or move to a different place or get out of a relationship that doesn't work or work on a relationship that needs work… You've just got to follow your heart or your passion or your family or your career… Mostly, your heart.”

“It plays with the idea of what is success? What is happiness? Because you see all these characters find success and happiness in their lives or lack thereof and, sometimes, it has nothing to do with what we would deem successful, which is the external things like money and cars and music,” James Wolk added. “Joe has money and cars and everything you could want from a materialistic standpoint, but he feels robbed emotionally at certain things… Sometimes what we think of as success is not what is actually the things that make us happy.”