This week, the French telecom Orange in partnership with Disneyland Paris released a new app called “The Lost Artifact.” Themed to the recently-opened Hotel New York – The Art of Marvel, the application features a few fan favorite heroes and some neat tricks. After getting a chance to try out the app for myself this morning, I thought I’d share a few thoughts. 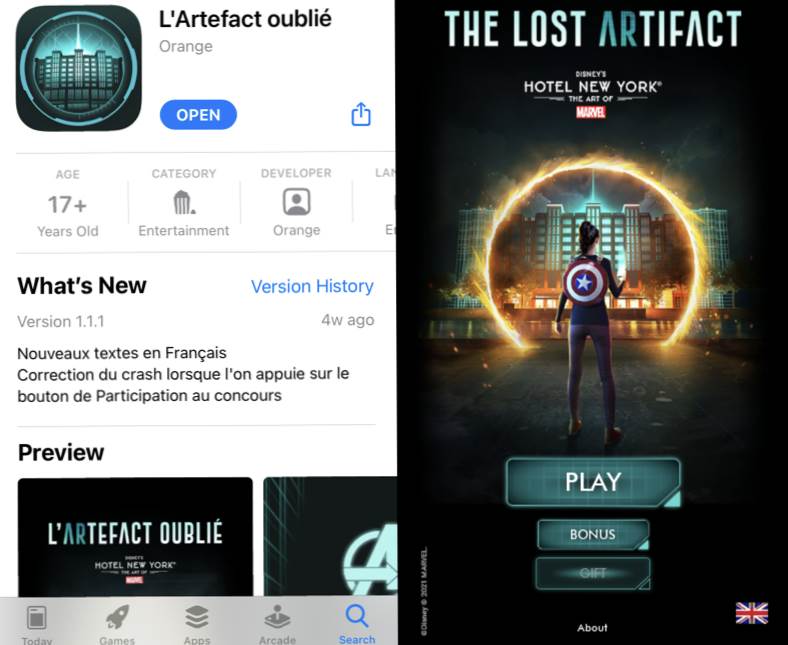 When I first saw news of the app, part of me assumed it would be limited to those in France. Furthermore, when I searched the App Store and was unable to find it, I figured for sure I was out of luck. However, using the French name “L’Artefact Oublié” led me to it (you can also use these links for the App Store or Google Play). Despite the app’s name being in French, once I opened it, the instructions and communications from Marvel heroes were all in English — but you can change the language to French by tapping the flag icon in the bottom right.

As you may have garnered from my headline, The Lost Artifact is an augmented reality experience. If you’re unfamiliar, this means that the app will utilize your phone’s camera to add interactive objects into your real-life setting. Because of this, you’ll need a decent amount of clear space to walk around and get good angles on the clues in order to move on.

While I’ve experienced some AR before, I was still impressed by what this app had to offer. Without spoiling too much of the story and its elements, I was particularly taken aback by the portal effect that literally saw me stepping from my living room into a Hotel New York suite. That said, once you’re completely ensconced in the hotel setting, a little bit of the magic wears off, but it’s still pretty cool nonetheless. 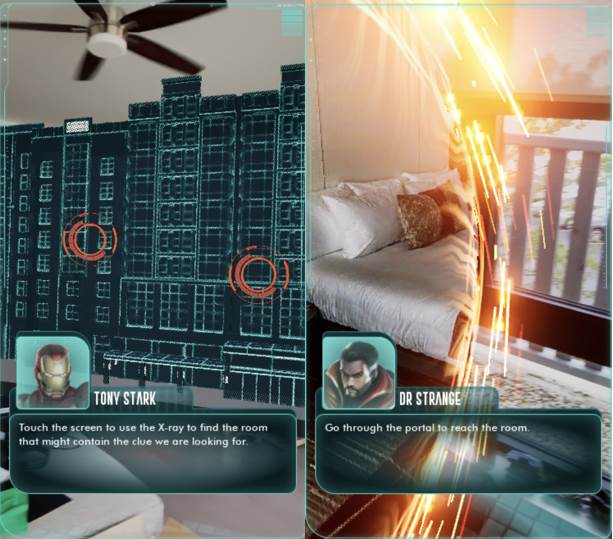 In order to complete the experience, you’ll need to solve a couple of puzzles and other tasks — some of which are easier than others. On that note, for the ones that gave me more trouble, the issues were that 1) I didn’t leave myself enough room to properly find the clue or 2) I found the clue but didn’t know how to proceed. I assume people smarter than me will be able to avoid both trappings. By the way, I will note that, if you close out the app entirely, you will need to start all the way over again.

Once you’ve finished the adventure, you’ll have the chance to enter a contest for a trip to Disneyland Paris and the Hotel New York – The Art of Marvel. Sadly, looking at the terms, this offer is only available to those in France or Luxembourg. In any case, I did find it funny that, while the graphics in the app looked great, the text displayed afterward looks like it was coming from a Sega Genesis — kind of weird.

I should also note that there is a Bonus feature in the app. However, this is apparently unlocked by scanning a painting within the Hotel New York – The Art of Marvel itself. So, obviously, I didn’t have a chance to try it out.

Overall, I had a surprising amount of fun checking out The Lost Artifact. Considering that it’s really just meant to be a promotional tool, it’s understandable that it’s a fairly short experience. While the replayability may be limited (and the amount of dialogue does get a bit annoying when you’re just trying to tap through to the next segment), I’m just excited to show my friends the awesome portal effect the next time I’m at their house. So, if you’re looking to kill a few minutes yet save the day at the same time, give L’Artefact Oublié a download and transport yourself to Paris.