Touchstone and Beyond: A History of Disney’s “Romy and Michele’s High School Reunion”

Last week John Cusack made a killing at his high school reunion but this week the return to high school gets a sillier treatment with 1997’s comedy Romy and Michele’s High School Reunion. 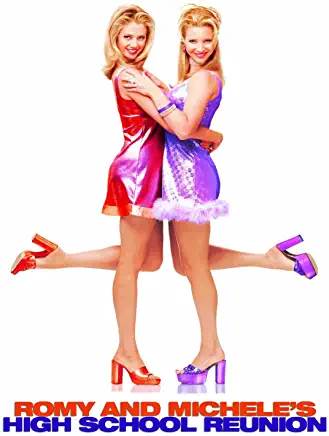 Romy and Michele are two friends living their best life in California. They aren’t rich or successful, but they are both content with their lives. When Romy runs into an old high school classmate named Heather, she learns of the upcoming ten-year reunion. Romy and Michele decide to attend.

Worried that they will seem like failures, the two concoct an elaborate story about their success, which falls apart within minutes of entering the reunion. While they may not be rich and famous, Romy and Michele learn that they had a great high school experience, and though they weren’t the most popular kids, they did have fun.

Sandy Frink, who had a high school crush on Michele, returns as well and his love for Michele has only intensified over the last decade. Michele is quite taken by Sandy’s looks and wealth and with Romy, they leave the reunion in his helicopter. As they look back on school, the friendship they share continues and even leads to Romy and Michele starting a new business.

Mira Sorvino and Lisa Kudrow are hilarious as the titular leads. Sorvino is wickedly funny with a broad range of comedic skills that makes Romy a character that audiences will love. From her tone and posture to her facial reactions, Mira Sorvino is dynamite in the role.

Lisa Kudrow pairs perfectly with Sorvino and while the two friends act very similar, Kudrow’s talent allows the audience to see the differences between Romy and Michele. Thanks to the two talented leads, Romy and Michele are characters we care about, laugh with and never at as they go through the film.

A film like Romy and Michele’s High School Reunion could easily lose its stamina halfway through. You will laugh right away, but three quarters of the way through the movie, the audience is still laughing and that’s because of Sorvino and Kudrow.

There isn’t much to the story, and that’s what makes this film perfect. Age tends to play with our memories of events, and while initially Romy and Michele think they need to seem successful to attend their high school reunion, we see their realization that they don’t need to be part of the popular group to have fun. Thanks to their friendship they had a great time in school, and in life after school.

The movie starts off with Romy and Michele making fun of Pretty Woman. I did not enjoy that movie and I am glad to see that others are sharing their opinions on screen. I just wish they complained about that movie more.

If you aren’t a fan of the high school reunion films, this one isn’t for you.

Romy and Michele’s High School Reunion gets a 4 Golden Popcorn Bucket rating. I had very preconceived notions of this film, and the moment I started watching, my previous opinions were obliterated by how unbelievably funny the movie is.

Mira Sorvino is hilarious. She is an undeniable talent that needs to be back on the big screen. Her range is incredible, and the fact that she plays Romy with heart and soul while at the same time making the audience laugh from beginning to end is something to see.

I love this film and will have to watch it again just to appreciate the movie more because I was laughing so hard throughout my first viewing.

Next week, October begins, and it’s time to get a little bit scared with Jennifer Connelly in Dark Water.