Molly makes a new best friend, and then leads her new softball team to victory in the second episode of The Ghost and Molly McGee. 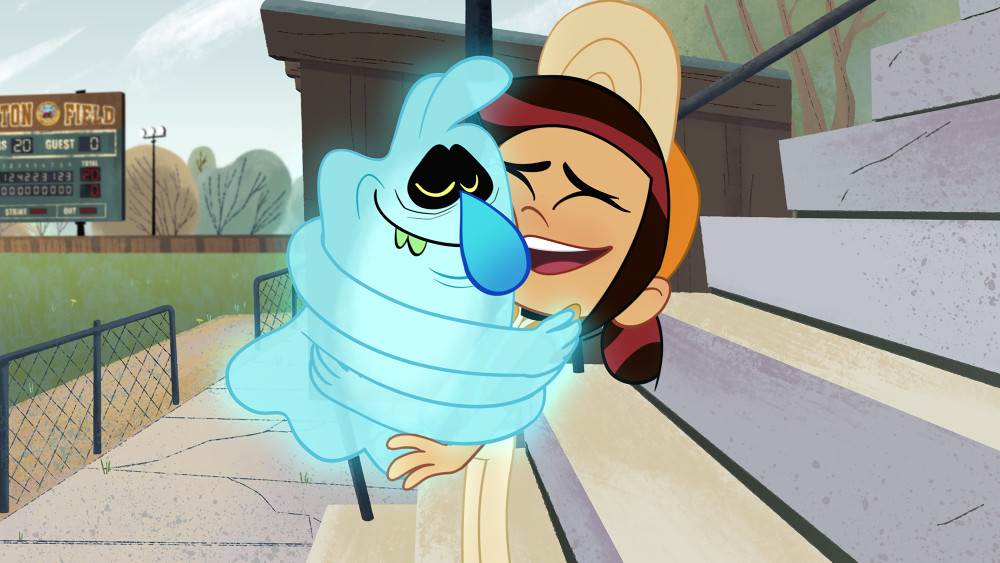 Molly is going on a camping trip and using this time to find a new best friend (of the human kind). She’s made a chart, ranking everyone with the most important thing being that “X Factor.” An indescribable quality her new Best Friend must possess.

Meanwhile, Scratch’s best friend from the ghost world, Geoff, shows up for a long delayed visit. Scratch fully intends to scare the campers, and tries to get Geoff to go away, but he doesn’t.

While out camping and ranking all the potential candidates, Molly suggests they all tell scary stories. Libby (who we met last episode) jumps in and tells the scary story of Howlin’ Harriett, a woman who lived in Brighton long ago who was arrested and in a freak accident, got hit by a train and all that was left of her was her mangled toes. Now the ghost searches campsites for campers to get her toes back.

Scratch and Geoff try to decide how to scare the kids, when Geoff suggests that they dress up like Howlin’ Harriet. Scratch sees this as an opportunity to push Geoff away and suggests he goes and gets all the parts they need to dress up. As he goes away, Scratch calls him a “Grade-A Buffoon” as we see a scarier ghost than Scratch emerge in the woods, now realizing how real Howlin’ Harriett is.

She emerges and scares all the kids, but Libby comes forward to help Molly when she realizes that they should just give Harriett what she wants, a new set of toes. With some friendship, crafts, and a little song, Harriett gets her new toes, and Molly has also decided who she wants her new best friend to be.

Thinking of how she is going to ask, Libby beats her to the punch and asks her to be her best friend with a swanky new bracelet.

The Brighton Lemmings softball team is ready to play softball, but spoiler alert: They’re terrible. Libby, Andrea, and others are all on the team and getting beat mercilessly, much to Molly’s dismay. While she isn’t even on the team, she is still disappointed but also decides to join the team, because with the power of positive thinking, she will be able to turn the team around regardless of her lack of softball skills or even desire to actually play.

Flash forward and Molly is on the team, pitching against rival team The Skylarks.

When the star player is at bat, she starts trash talking to Molly and Scratch says that he is the only one allowed to make fun of her and decides to help Molly cheat without her knowing.

Molly becomes the star player, and the team turns around. Townsfolk are showing up and cheering. Everything is great. Then, Molly realizes Scratch has been helping her this entire time. But if she is cheating and nobody else knows, and everyone is happy and inspired…is it really so bad?

A modified song plays, inspiring everyone (and cheating a little), and the team is competing against the Skylarks again and the Lemmings are up by 18 runs. Too bad at this exact moment, Scratch gets summoned before the Ghost Council to discuss his monthly scare reports. Apparently, he wrote down a Billy and a William who are the same person, so he must scare one more person today to meet his quota.

He gets sent back to Molly to discover her startled self, and he realizes that in the time he was gone, the other team has scored 17 runs and has the bases fully loaded.

Ready to help cheat again, Molly tells him not to and let the team win or lose on their own. She throws a pitch which is then hit and bounces off literally every player and is caught by Libby in her mouth, still considered an out and the Lemmings win.

As the other player, Tammy, comes back to talk some more smack to Molly, Scratch remembers his quota and he goes off screen for the scare which we don’t see but returns as the episode ends filling out his forms making sure if Tammy’s name is spelled with an “I” or a “Y.” Roll Credits!

This episode of The Ghost and Molly McGee is now available on the Disney Channel and the DisneyNOW app.