Touchstone and Beyond: A History of Disney’s “Dark Water”

October started early and what better way to end the second year of ‘Touchstone and Beyond’ than with a scary movie to close out another year of writing. Jennifer Connelly stars in the North American remake of the hit Japanese horror film Dark Water. So how dark is the water? Let’s find out. 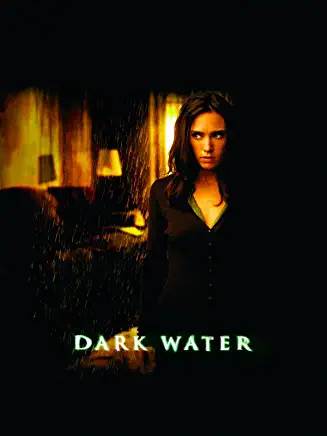 Dahlia and Kyle are divorcing. Due to money issues Dahlia and her daughter Ceci move into a low rent building on Roosevelt Island. The apartment building that they have chosen for a home is hiding more than just bad plumbing. While the caretaker Veeck is less than friendly and the environment of the building is below standards, life seems to be going well for Dahlia and Ceci. Stability can only last for so long in a volatile situation.

Ceci develops an imaginary friend that starts to cause trouble at school and at home. Soon the apartment develops a leak in the ceiling which drips buckets of black water. To make matters worse, Dahlia is struggling to defend herself against Kyle in the divorce. Their relationship is strained, and due to her current living conditions and a history of mental health issues, Dahlia is starting to imagine things.

Paranoid about losing custody of Ceci, Dahlia hires a lawyer named Jeff. Smart and capable Jeff helps Dahlia get on an even keel, until the paranoia turns out to be reality, and the dripping water is more than a busted pipe. Surrounded by the black gooey water about to consume her life and Ceci’s, Dahlia is forced to make a decision that will alter her future forever.

Jennifer Connelly shows how talented she is by making Dahlia a likeable character. She layers her performance between loving mother, divorcee, and haunted apartment dweller with finesse. Maintaining and proving her sanity is a difficult task as the world collapses around her. Connelly balances the mix of emotions which keeps the audience on her side.

The fear that should come with this film has been lost in the adaptation. While there were a few creepy moments, most of them come from the childhood memories of Dahlia, the horror of the dripping water from the ghost upstairs isn’t that scary.

Tim Roth and John C. Reilly are excellent in their roles, but they don’t get enough screen time to make their characters matter. Every time they were on screen, I wished they were in the film more.

Dark Water is very enjoyable, but not that scary. There are many suspenseful moments, but the fear factor is lacking for most of the movie. Jennifer Connelly is excellent, but the film is just alright.

Dark Water gets a 2 Golden Popcorn Bucket rating. It’s a good film if you have nothing else to do.

Next week a retrospective of year two of ‘Touchstone and Beyond’. What was the best and worst of another year of plowing through the Touchstone and Hollywood Pictures film vault? Any surprises? Find out next week.