It’s been quite a few months since we’ve seen a new episode of Big City Greens, but season 3 is premiering with this year’s Halloween episode and the series is back…with a vengeance. 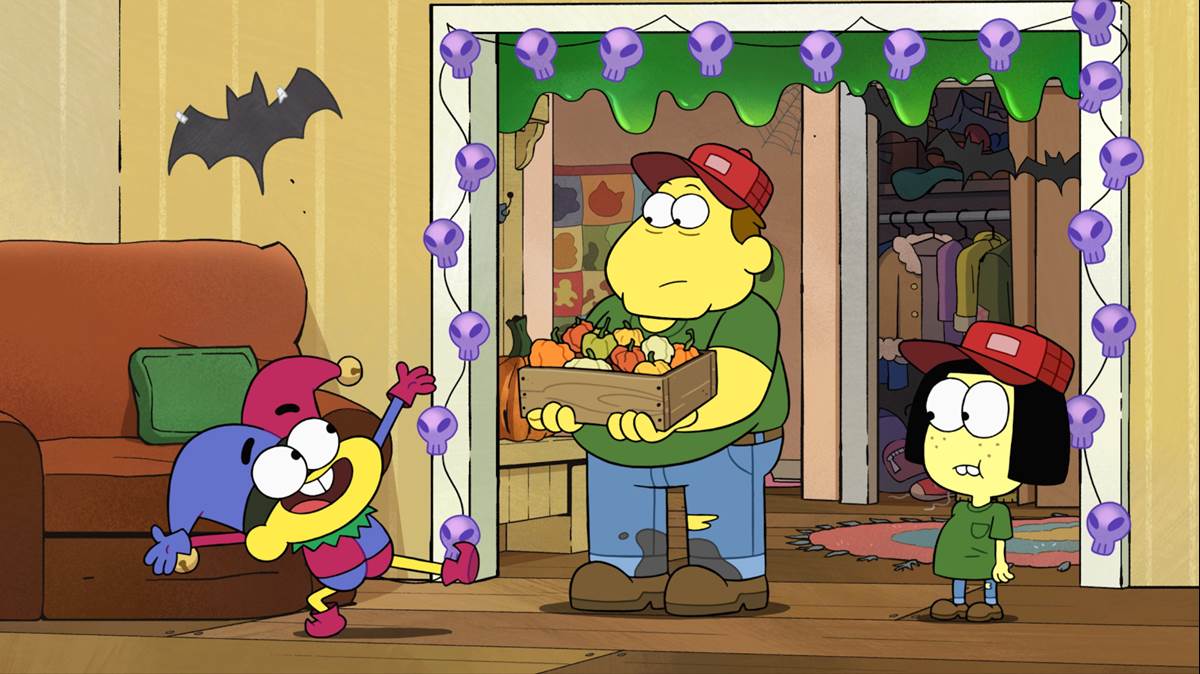 In this year’s Halloween special, “Squashed!” The Greens are hosting a Halloween party, but unlike last year (which saw a horde of zombie-fied animals take over the farm during a “blood moon”) they expect this year to just be some good ole’ fashioned Halloween fun. Cricket is running around dressed as the mischievous prank-pulling clown, “Trickor,” and Tilly is dressed like her dad, Bill, and the day seems to be going easy as Tilly and Bill set out to deliver this year’s (less-than-great) pumpkin haul. However, on Mars, Billionaire scientist Gwendolyn Zapp is trying to maintain control at a lab where vegetables are seemingly coming to life and going crazy, so her research must be continued down on Earth. Bill and Tilly deliver Zapp her fresh produce order from the farm, and while there Tilly learns of the compound that makes the vegetables grow and decides to sneak some away to help her dad grow the pumpkins into more impressive gourds for jack-o-lantern carving during tonight’s party. Needless to say, the party becomes more than just ole’ fashioned Halloween fun and into a rather precarious situation.

This episode surprisingly takes the main character, Cricket, and sits him comfortably in the passenger seat for this Halloween special and lets fan-favorite Tilly take over. That’s not to say Cricket isn’t in the episode at all, he’s just not the central focus. Tilly drives the episode, and we (as usual) root for the well-intended eldest Green child while we know she’s making the wrong choices with all the positivity in her heart. We also see the bulk of the characters we’ve grown to love return for the Halloween party, with appearances from Remy and Vasquez, Gloria (with a laugh-out-loud call back to the last Halloween episode), Benny, Community Sue, and other favorites. The main cast returns to voice their characters along with special guests Danny Trejo and Cheri Oteri who return as Vasquez and Gwendolynn Zapp respectively.

“Squashed!” is a great welcome back for the series, and is full of what makes the series stand out among other Disney Channel offerings, with brilliant one-liners, call backs, sight gags, and unexpected quips that leave viewers laughing out loud. It also has that bit of heart that makes the outlandish antics of the series grounded in some kind of reality. I mean, wild genetic pumpkins from Mars that cling to human party guests as hosts are ripe for heartfelt family moments right? Similar to last Halloween, we see some of these moments between Vasquez and Remy, but also Cricket and Tilly, and most importantly, Tilly and Bill. After all, it was her attempts to make her dad happy that got them into this whole mess. I can also say, I was sold on this episode with the special opening credits for the episode, featuring quick flashes of ventriloquist dummies and aliens, and other subtle changes to the normal opening sequence, including the word “run” appearing unexpectedly on a window.

Despite the whole life-threatening nature of the man-eating vegetables, I can honestly say that I’d spend my Halloween at the Greens’ party for sure, and give the Big City Greens Halloween special 8.5 out of 10 pathetic veggies that need a dose of Compound 415C.

“Squashed!” debuts on Disney Channel on October 9th, and will also be available on the DisneyNOW app. You can also catch up with past seasons and episodes of Big City Greens on Disney+.