Hello and welcome to the sixth installment of Laughing Place’s recaps of the science-fiction/drama series Y: The Last Man. Episode 6 of the show, entitled “Weird Al Is Dead,” was released yesterday via FX on Hulu. 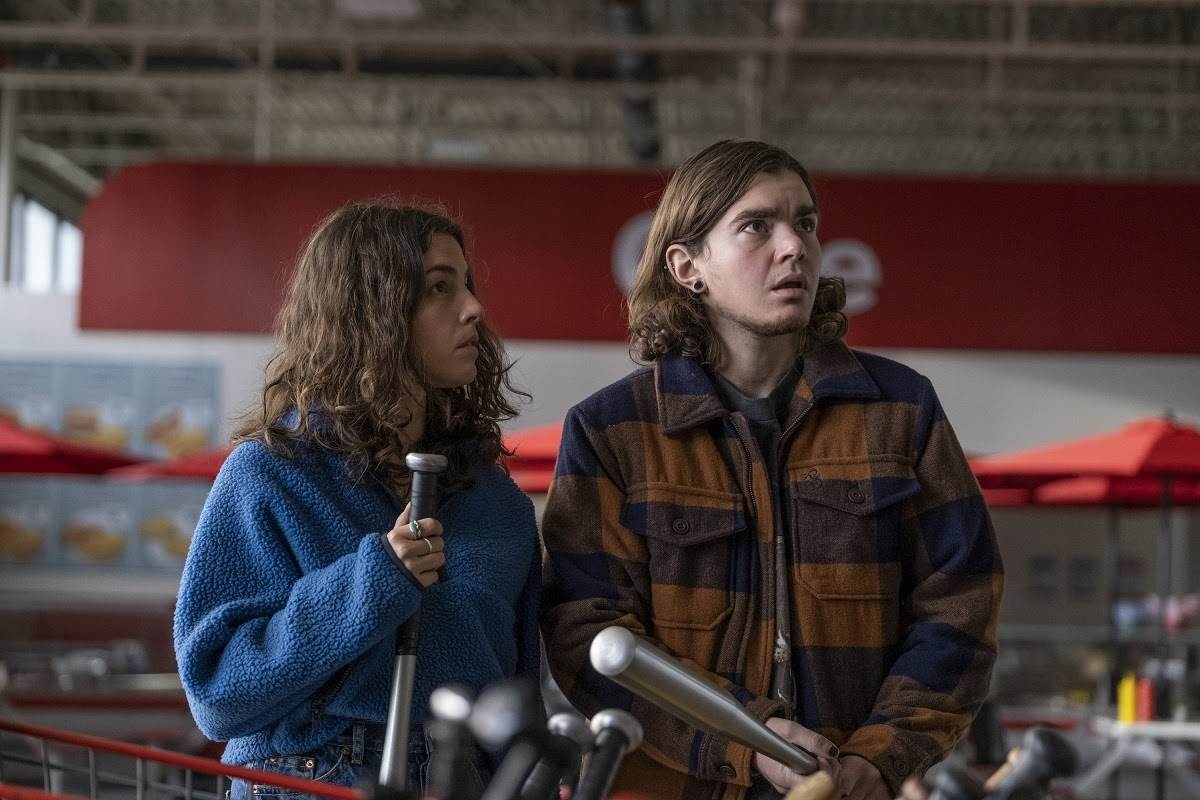 “Weird Al Is Dead” begins with three motorcycles racing down an empty highway. The women arrive in Boston and pull out a photo of Agent 355 asking, “Have you seen this woman?” Later at nighttime, Dr. Mann asks Agent 355 if Yorick has been masturbating. “He should, if he’s not.” In a temple nearby, Y discovers a group of people singing Radiohead songs in honor of “the great dead men.” Yorick says he saw Radiohead in concert because his sister wanted him to know there was more to music than Weird Al. “Rest in peace, Weird Al,” says one of the worshippers. The motorcyclists arrive at the ceremony and continue asking around about Sarah. “We’re being followed,” 355 tells Y. They take Mann and hide in a church, where Sarah admits she never talked to the president. “Boston wasn’t safe.” Yorick demands to know what’s going on. Sarah says they’re going to lure in their pursuers and “take them off the board.”

At the Pentagon, Kimberly Cunningham meets with Regina Oliver at the memorial wall, and asks if she was married. “No. I love men. Just never found a guy who could take the heat.” Kimberly says Oliver is healthy and ready to serve, so the others should be parading her around like a feminist hero.” Oliver says she used to be a democrat until she voted for Reagan to make her mother angry, and never looked back. “Can you believe Jennifer Brown is president?” asks Kimberly. “She’s got tragedy on her side,” says Oliver. “She’s invincible.” “What if she’s not?” asks Cunningham. At the church, Yorick wakes up to find Agent 355 watching over him and Dr. Mann while they sleep. He approaches her to talk but she seems to be in some kind of trance, crying as she stands still. She almost walks off the edge of the church’s balcony until Y stops her. At the women’s compound in the Costco, a group tells stories about abuse they faced at the hands of men. Hero gives Sam some hormones she found in the store’s pharmacy. “This place isn’t all bad, right?” 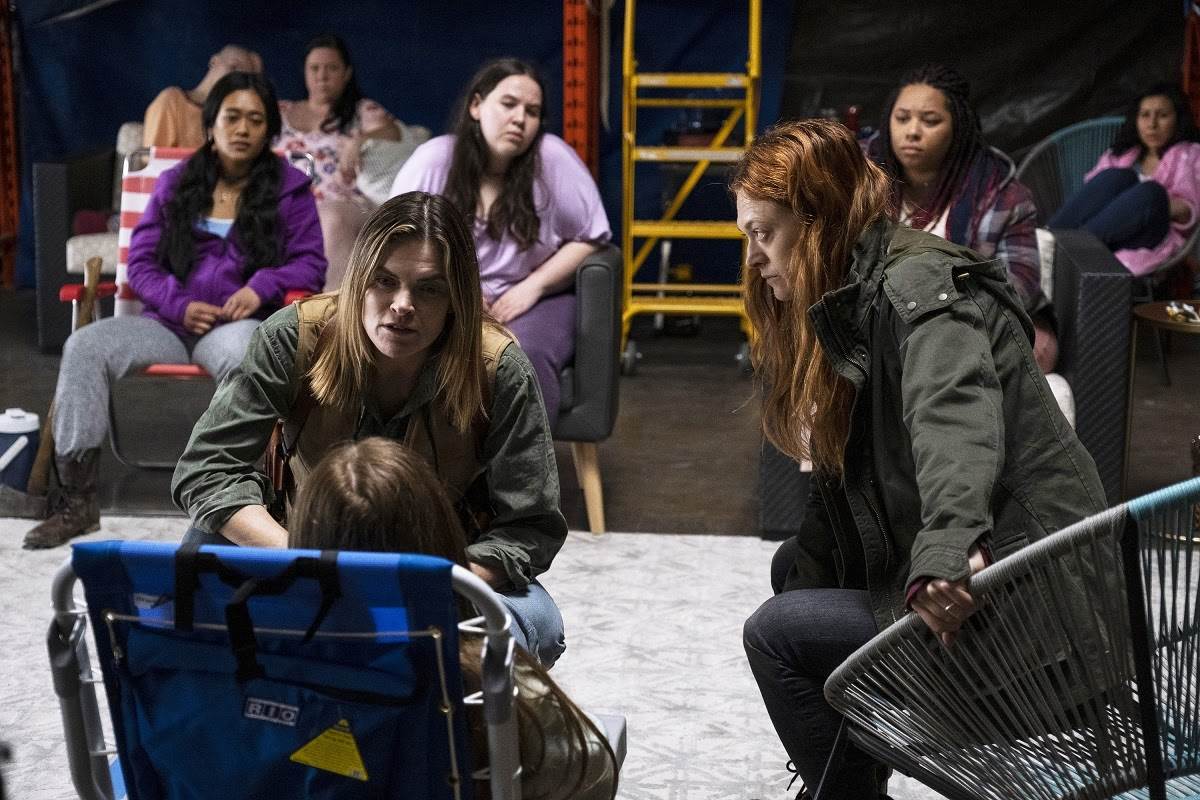 Sam says everyone is staring at him, and Hero takes some other drugs “for fun.” The leader of the group, Roxanne, continues the discussion until Nora and her daughter try to leave. “You are a guest in our home,” says Roxanne, who asks Mackenzie what was the first thing men always said to her. Nora gets upset. “She lost her father. She’s grieving.” “Grief can’t protect her… or you,” says Roxanne when suddenly a makeshift alarm goes off. Nora is led up to the roof and given an automatic rifle to shoot at refugees heading to the store. “There’s a kid with them,” protests Nora. Roxanne heads outside to meet with the newcomers. “Seems like you took a wrong turn. There’s nothing we can do for you here. Turn around and go back the way you came.” The refugees ask Roxanne to just take the young girl, but they are intimidated out of it and leave. From the roof, Nora looks on, disgusted. “We’re lucky to be here. It’s much worse out there,” says her companion.

At the church, Agent 355 goes through a box of junk looking for supplies while Yorick brushes his teeth. Dr. Mann shows Y the photo of Sarah from the motorcyclists. “They’re after her– not us.” Mann wants to leave 355 behind, but accuses Yorick of having a thing for Sarah. “She has a gun. What if she has a nightmare and shoots us? She’s going to get us killed.” “I’m not leaving her,” replies Y. At the Costco, Nora brings tea to Roxanne. “Worried I’m going to kick you out?” Nora apologizes for that morning. “This is the first place we’ve been that feels safe.” The woman says she’s been a detective a long time and that she’s got instincts. They discuss mastectomies and Amazons and Nora apologizes again until Roxanne stops her. “That was for the men. The world ended. It’s okay to be yourself.” Hero takes a bath in front of the other women in the compound, who do so openly. “We get the feeling you don’t like yourself very much,” says one of the women when Hero doesn’t expose herself. Another woman talks about how liberated she felt after the cataclysm, and how Roxanne saved her life. “Don’t you want to stop being tired? Whoever you were before, you don’t have to carry that with you.” In his bunk, Sam is approached by one of the other women from the compound. “Must be weird here for you,” she says. “A lot of man-hate going around.” She says she herself doesn’t hate men, and asks Sam if he’s excited for tonight. “What’s tonight?” asks Sam. “The funeral,” she replies.” Sam looks confused. At the church, Agent 355 tells Yorick her plan to lure in their pursuers. “Your job is to sleep in the basement,” she tells Y. He says she could get some rest. “You know that you sleepwalk, right? It’s not the worst thing to have somebody help you every now and then.” “I’m not your entertainment,” replies Sarah. They argue and she leaves, so Yorick goes back to Dr. Mann, who is feeding sacrament wafers to Ampersand. “You were right,” he says. At the Pentagon, Christine is approached by Kimberly, who asks how she’s feeling. “You should be getting pampered.” Christine says she’s not ready to tell anyone, and she’s not even sure she wants to keep her baby. “Christians are actually pretty understanding,” says Kimberly. “God is trying to teach us something, and he’s given you the most incredible gift– life, in the middle of all this death.” Kimberly offers to raise the baby, to Christine’s shock. “Just think about it.”

At the compound, Roxanne says “we must say goodbye to someone we have grown to love,” before introducing one of the women and giving her life story. The woman lays down on a plastic sheet, where the others cover her in dirt. “Goodbye, Laura,” they all say during the ceremony. Nora swallows her pride and participates, dumping a shovelful of dirt on Laura, who then gets into a bathtub and is washed clean by the other women. Then they push her under the water for a few seconds. She resurfaces and gives herself a new name: Athena. “This is so weird,” says Sam, as he and Hero watch from the background. Sam wanders off and is followed by the woman who talked to him earlier. “You think we’re all crazy, don’t you?” She tells Sam to keep a low profile because none of the women are allowed to be alone with him. At the Pentagon, President Brown is informed that Agent 355 has been tracked down to a church in Pennsylvania. She’s given a folder with information on Sarah’s background. “At this point we have to face the possibility that she’s working for someone else.” 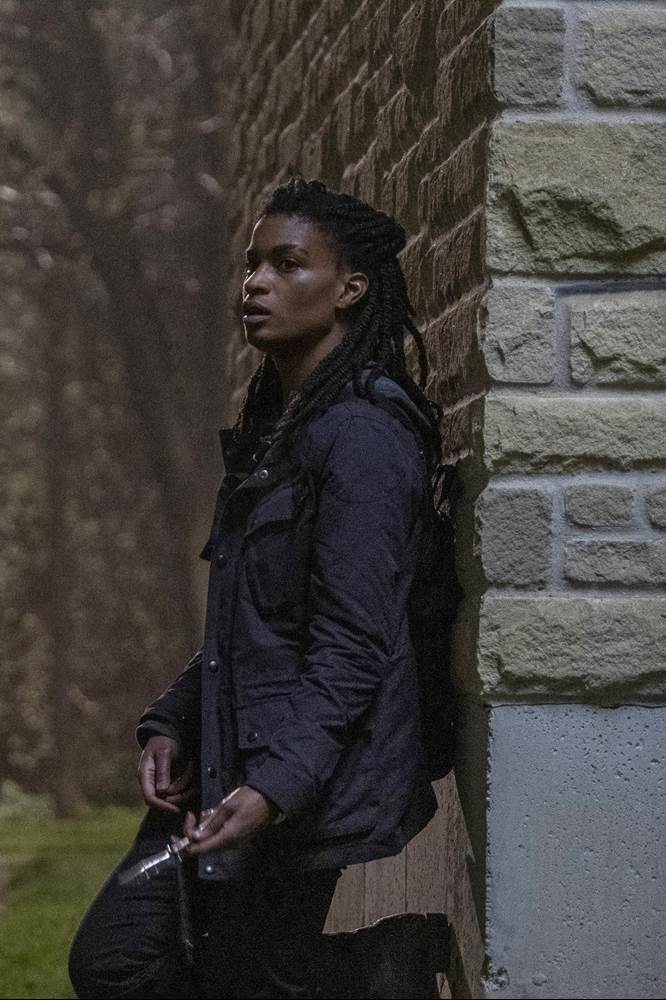 Outside the church, Agent 355 tends a fire as her pursuers approach, reporting back to the Pentagon. “Are we sure we want to send them into a confrontation?” asks President Brown, but Oliver says the soldiers can handle themselves. Sarah enters the church to find that Yorick and Dr. Mann have abandoned her. “Proceed with caution,” orders the president, just before Sarah starts incapacitating the soldiers one-by-one. Hearing gunfire, Yorick and Dr. Mann start running, but Y drops Ampersand’s carrier and falls behind. 355 catches up to Mann. “Where is he?” she asks. Sarah knocks out the remaining soldiers just as Yorick returns. She asks, “Did she get a real look at you?” and has Y cut the soldier’s shoelaces to slow her down when she wakes up. “Until we get to San Francisco, this is my show,” says 355. Back at the Pentagon, Olver and Brown have a confrontation. “You called me a xenophobe and a bigot.” “Forgive me,” says Brown, who disavows Agent 355’s actions.

At the Costco, Roxanne approaches Hero and talks about constellations and her old partner from the police force. “I’d like you to stay and join us.” “You don’t know me,” says Hero. “I’m not a good person.” Hero confesses the affair she had with her married coworker and that she accidentally killed him the night before the cataclysm. “No one knows. It’s like it never happened. You can’t kill somebody and get away with it.” “It seems like you did,” says Roxanne. “You can be whoever you want here… it’s up to you.” Inside, Mackenzie sleeps in her bunk and Nora is awakened by the sound of women arguing. She walks over to find the woman Sam was talking to being accosted by three others. One of them sees Nora, smiles, and then they begin to beat the woman on the ground. The episode ends over a women’s choir singing Radiohead’s “Karma Police,” coincidentally the same song used to conclude this week’s Ted Lasso. 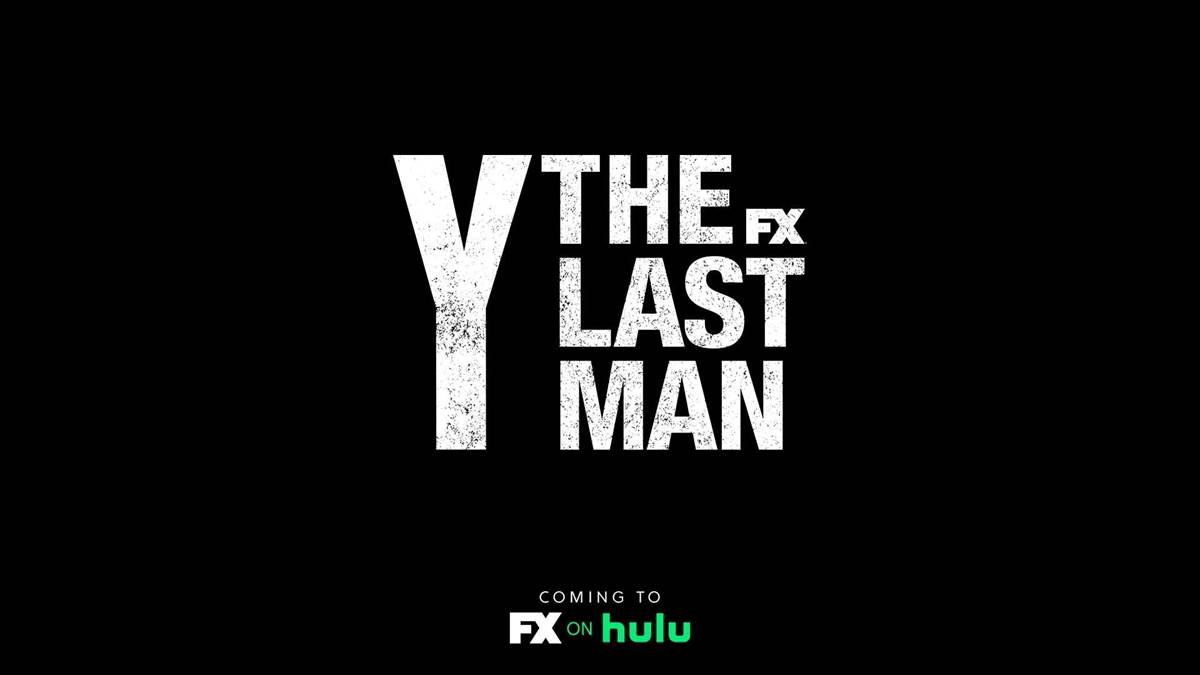