Hello and welcome to the fifth installment of Laughing Place’s recaps of the science-fiction drama Y: The Last Man. The latest episode of the series, entitled “Mann Hunt,” was released yesterday via FX on Hulu. 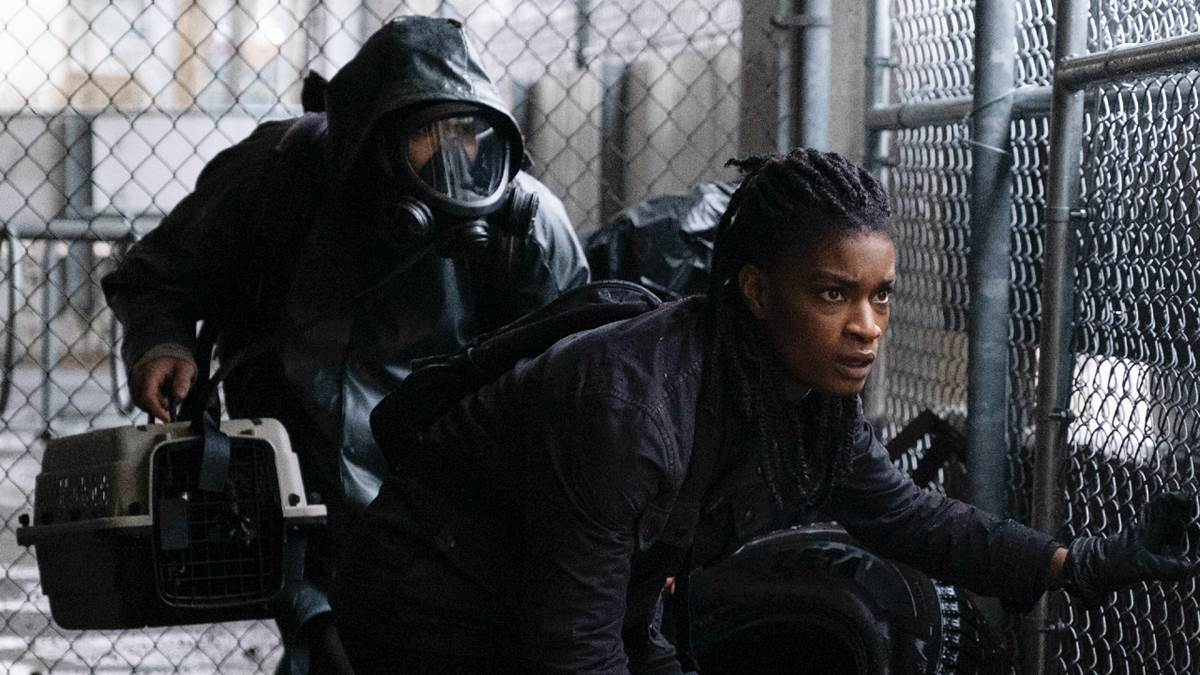 “Mann Hunt” begins at Boston’s abandoned Fenway Park, where Agent 355, Yorick and Ampersand race by on their motorcycle. “RACISM: AS AMERICAN AS BASEBALL” is spray-painted on a brick wall outside. After the opening credits, Sarah hides the bike in a cardboard box while Y wonders what Dr. Allison Mann is like. He notices graffiti that says “HOAX” and “THEY KNOW WHAT THEY DID.” A tank drives by making announcements in an effort to keep the peace and 355 makes sure Y is wearing his mask as they sneak around. Later, Yorick complains aloud about Sarah’s controlling nature before she makes him wait in an alley and gives him a small knife for protection. She goes down the street to talk to one of the soldiers in the tank. She makes up a story about clearing a stash of grenades nearby and demands the army let her through, as she is one of them.

Yorick sees more graffiti about how the cataclysm was a hoax and the president is a liar. He breaks into a door behind him in the alley. Sarah enlists the army’s help in tracking down Dr. Mann and learns how they’re dealing with protestors and rioters at Harvard University. 355 asks for access to the Science Center, but is told that it’s gone. Yorick finds a print shop that’s been making the propaganda posters he’s seen around town, and he takes a literal ampersand from the printing press. A woman comes in behind him and confronts him, telling him that if he’s a “friend,” he should act like it. More women are brought into the print shop, having been tear gassed while protesting outside. Y pours milk in one of their eyes to neutralize the burn. The first woman thanks him, believing him to be another rioter, and offers him a place to stay. “They’ve got testosterone, if you need it.” Yorick removes his mask, feeling safe that the woman believes he is trans, and says he rescued Ampersand from a lab. He’s provided with information about a local safehouse. 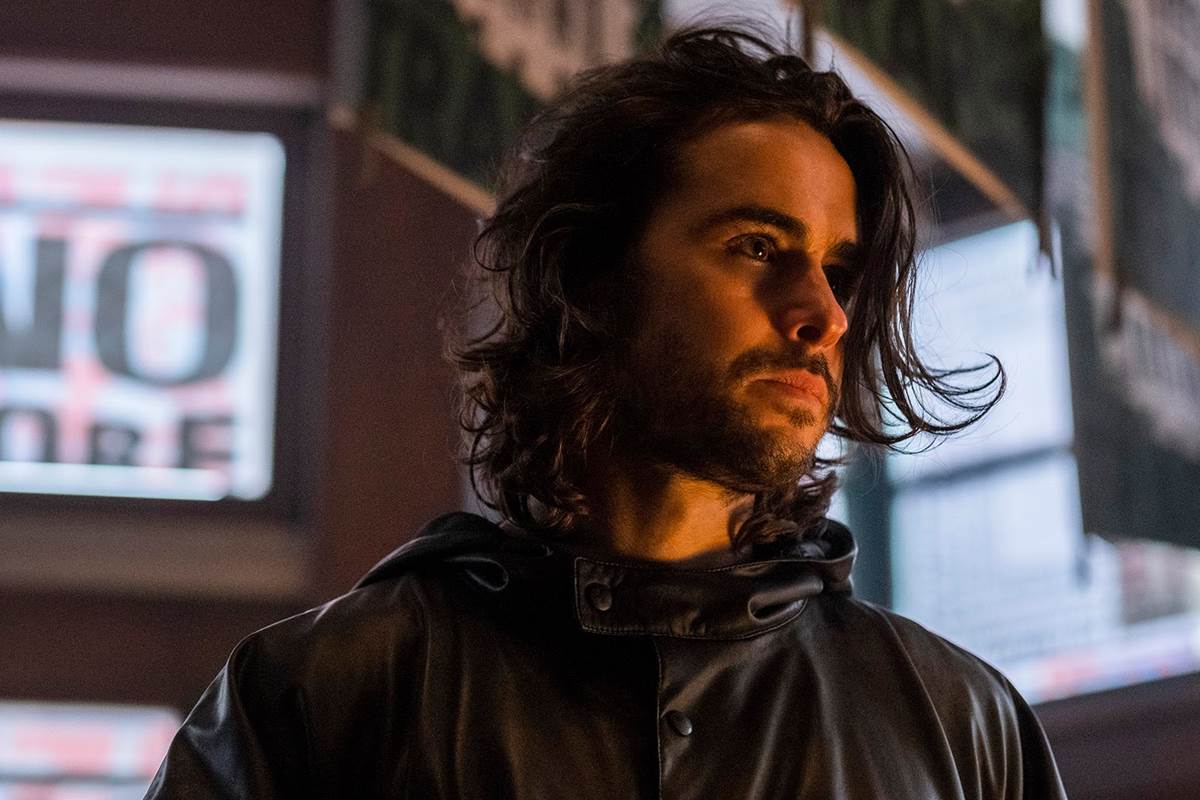 Yorick returns to the alley to await Sarah, who returns and asks him if anything happened. He says he lost the knife and 355 tells him the lab was destroyed. We cut to the Pentagon, where President Brown is being briefed on current situations. She tells her team about what will happen when Senator Oliver returns, planning to offer her “a senior position of some kind.” Sarah and Yorick break into Dr. Mann’s apartment, where they find a baby crib. “There was nothing in her file about a crib.” They also find multiple photos of a Union Club, so they go there and 355 shoots the lock open when it takes too long for Y to use his lockpick. Inside, they discover that someone has been living in one of the chambers. Yorick lets Ampersand out of his cage, but is attacked from behind by Dr. Mann, who Sarah holds at gunpoint. “Do you mind?” Mann immediately realizes that Y has a Y chromosome, and is shocked to find out that both Yorick and Ampersand are male, and survived the cataclysm together.

Sarah tells Mann that they were sent there by the president, and that she is intended to return to Washington with them. Mann refuses, saying that she plans to travel to San Francisco where there’s another lab she can use to continue her research into human cloning. Yorick is bleeding from Mann’s knife attack, and 355 stitches him up while they argue. Sarah tells Mann that nobody can know about Y’s survival, and calls the protestors outside “crazy,” which Mann balks at because of her distrust in the government. Yorick tries to diffuse the situation with a joke, but instead 355 leaves them alone together while she retrieves her satellite phone. She intentionally breaks the antenna and tells Y that she needs to find a new one. “I’ll be back in a couple hours.” Dr. Mann and Yorick do not seem thrilled to have been left in each other’s company. At the Pentagon, President Brown launches a campaign to battle misinformation. “We are the government. We can do better than newsletters.” An aide tells Brown that a helicopter crash site was found, though no human remains were located. The officer says 355 and Yorick must be dead. Kimberly Cunningham washes her hands in the bathroom and drops her purse on the ground. As she’s sifting through the junk that fell out, one of Brown’s aides comes in to use the restroom and Kimberly presses her for information on the helicopter crash. “Can you blackmail me some other time?” says Christine from the stall. From under the door, Kimberly notices that Christine is bleeding, and the second woman says she thinks she is having a miscarriage. Kimberly helps Christine clean up and takes her to a doctor, who gives her an ultrasound. Christine asks Kimberly to keep it a secret just before the doctor discovers the baby’s heartbeat and that it is likely a girl.

Agent 355 arrives at a boarded-up mansion and knocks on the door, having learned the address from the piece of paper she keeps folded up in her pocket. No one answers, so she climbs up to the second floor and enters through a bathroom window. Inside, she has a gun pulled on her by another woman, and they struggle until it’s a draw, with both combatants pointing their weapons at each other. Sarah asks the other woman if this is her house, and she replies that she knows they’re “both looking for her.” The second woman admits to being Agent 525 and takes the cartridge out of her gun. “Did Fran give you this address? She told me I was the only one who had it. Did she tell you that too?” She says she was in the middle of an op in Michigan when the cataclysm happened, and that she was also reassigned the day before. “That’s a hell of a coincidence,” says 355. Later, 525 gives 355 some additional armaments and tech and asks where the agency found her originally, and Sarah asks what 525 is going to do if she finds her. “I’m going to put a bullet between her eyes and finally live my life. You should do the same.” At the Union Club, Yorick notices that Dr. Mann has drawn penises on all the portraits of men in the building. “People grieve in their own way,” says Mann, who also says she doesn’t enjoy teaching, but she didn’t want to work for the government. Y says he’s a magic teacher, and Mann asks if 355 is always running off on secret missions without saying where she’s going. Mann sows seeds of doubt about Sarah’s intentions, and tells Yorick more about her secret San Francisco lab. She says she needs to gather Yorick’s genetic material before he turns 40 and it starts to deteriorate, to which Y says he’s 27. “You look older.” “It’s been a stressful few months.”

At the Pentagon, President Brown starts to break down about why she hasn’t heard from her son or Agent 355 yet. Christine enters and tells her that the two pilots’ bodies have been identified, but they haven’t found anyone else. Brown asks if Sarah killed the pilots, and demands to know more about the agency she works for. “I’ll worry about the cover story. You just do it.” They head out to meet Senator Oliver, who is brought in on a wheelchair and greeted with a round of applause. “We’re so glad you’re home,” says Brown. Later, Christine passes Kimberly in a hallway and gives her the cold shoulder. Kimberly meets with Oliver in her private quarters, and says none of this turned out the way her father, the previous president, would have wanted. “This place is a Rachel Maddow fever dream. We have to stick together.” “Your father won in a landslide, and we still ended up with socialists in charge.” 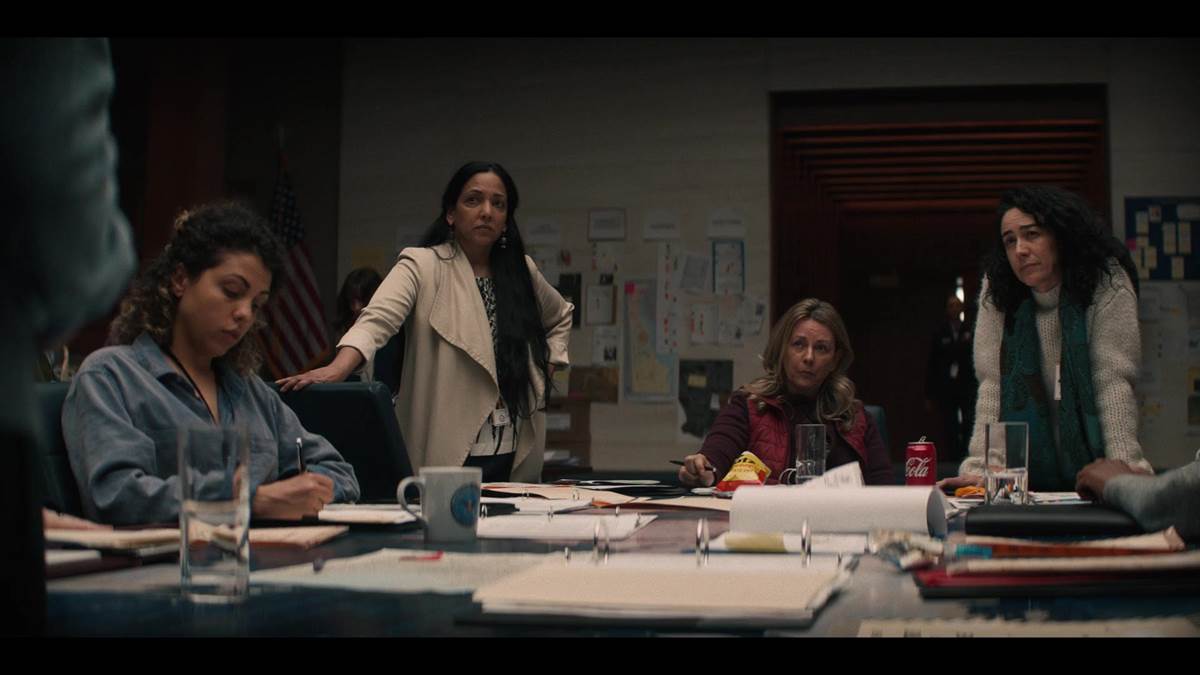 President Brown enters, interrupting the conversation, and Kimberly leaves. Oliver guesses that Brown isn’t keen to give up the presidency, and asks her for something to eat. Back at the Union Club, Dr. Mann and Yorick drunkenly discuss biology, and Y asks Mann why she hid out there. “I didn’t have enough Jim Crow-era stained glass in my place,” Mann jokes. Yorick tells Mann that he noticed the crib in her apartment. “You made assumptions. I don’t have a kid.” “I was just asking because you seem sad.” Mann is offended, but says even if she can figure out why Y survived, it won’t begin to scratch the surface of what they have lost. She talks about biodiversity among many animal species beyond humans and slumps against the wall. “I don’t envy you,” she says to Yorick. “You won’t have much of a life from now on, will you?” Suddenly Agent 355 enters and says they have to leave, lying that President Brown authorized a trip to San Francisco. 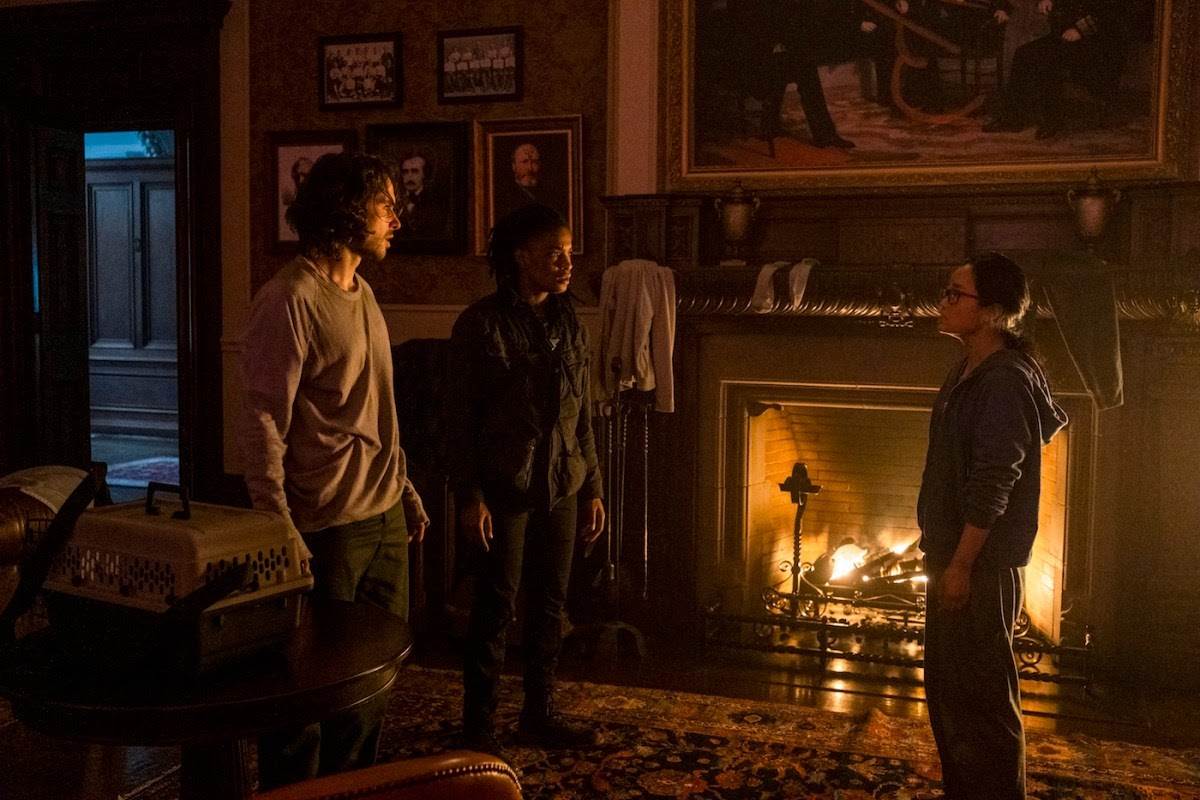