It’s Gabby’s first Halloween in Havensburg on the 13th episode of the second season of Gabby Duran and the Unsittables. Premiering October 8th on Disney Channel, this episode offers fans of the show some spooky fun. Gabby may think she’s the ultimate scarer, but she will soon learn to “Beware the Fright Master!” 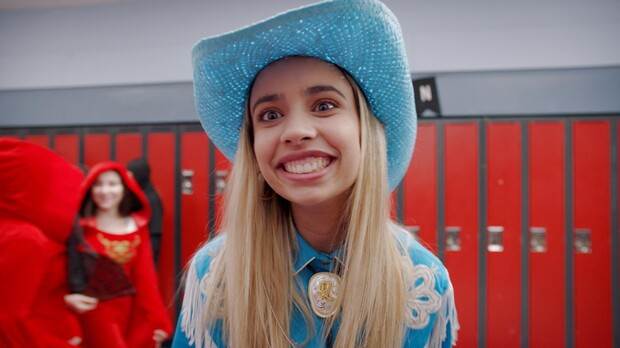 It’s 12:01 am on Halloween and Olive is looking for a late-night snack in the kitchen when her mother sneaks downstairs to join her. But when they hear thunder and see flashes of lightning from the upstairs hallway, followed by scratching noises, they both get scared. Ditching their plans for a midnight snack, they decide to go back upstairs when they see the shadow of a giant spider on the wall. They flee to the basement and Dina tells her youngest daughter that she will text Gabby to warn her. It turns out this was all a prank from Gabby, the spider being just a hand puppet. “Just wait until they see what’s in the basement,” Gabby says before hearing screams. She refers to herself as the “Hallo-Queen.”

At school, Gabby has decorated the inside of her locker to look like a city overrun by zombies as part of a locker decorating contest. Jace tells her he thinks his locker is scarier, showing her the earth after the effects of Global Warming. Gabby tells him that climate change isn’t a Halloween theme, but their conversation is cut short by a scream down the hall. Wes dropped his backpack in fear and when Gabby looks inside, she tells him it’s just a rubber head. He holds a black card that says “Fin” on it in red writing (“Fin” means “The End” in French). Another student sees it and yells “The Fright Master is back!” The other students are scared and Wes tells Gabby that the Fright Master terrorizes the kids of Havensburg with their worst fears. Gabby laughs it off, saying she’d like to see the Fright Master try and get one over on her.

Later, Gabby opens her locker to find a lame poster of a dentist covering up her display. But when she pulls it off, a demented dentist doll pops out at her and threatens to pull out all her teeth. Gabby falls backwards in fear and other students laugh at her. Worst of all, her gory city scene has been ruined and a black card has been placed inside that says “Fin.” She vows to get revenge on the Fright Master.

In Swift’s office, which is empty because he took the day off, Gabby makes a chart of everything she knows about the Fright Master and uses blueprints of the school to pin the location and time of each attack. She quickly realizes that it’s a clock and that the next event will happen at 1:00 in the boiler room. Just then, she and Wes hear a scream through the vents and rush to the boiler room to find Susie on the floor crying. The wall is covered in college rejection letters from the top schools. Gabby realizes that there isn’t a “Fin” card and as she says it out loud, a deep voice says “Right here” and she sees a cloaked figure running away. Gabby and Wes chase the Fright Master, with Wes grabbing its hood to reveal a skeleton face before it vanishes. Gabby inspects the hood and finds hairs inside. When Gabby has Orb analyze the DNA, she discovers that the hairs belong to Jace.

To enact her revenge, Gabby turns her house into Jace’s worst fears, including a menacing Viking and a projection of himself with a bad haircut. To lure him into a false sense of security, the first scare is a rubber spider on a string, but when Jace arrives, he is so afraid of the spider that he doesn’t even see the rest. He falls to the ground twitching and Gabby has to call an ambulance to take him to the hospital. Gabby feels bad so she follows him there where Jace is unconscious and hooked up to a machine. When she says “I just wish you’d wake up,” the monitor flickers and says “Warning” before the lights go out. When they come back up, Jace’s bed is empty.

Gabby yells for Jace, apologizing as the monitor goes dark and flashes the word “Fin” in red. The Fright Master appears and points to Jace on the floor behind her with a dentist bib on. The Fright Master has a drill bit in his hand and corners Gabby, who cowers in fear at the thought of getting a filling. “I guess scary doesn’t recognize scary,” the Fright Master says before pulling off the skeleton face. It was Wes, who tells Gabby that he started this tradition in the 4th grade. He had planned to include Gabby in on his plans this year, but when she treated him like a baby over the head in his backpack, he decided he needed to teach her a lesson and Jace agreed to help him. It turns out that Jace’s mom works at the hospital, which is how they got the ambulance ride and the room.

While all of this occurred, Principal Swift and Jeremy tried hard not to repeat the mistakes they made last year on Halloween when they gave out raisins and kids attacked their house. This time they have candy and are dressed as department store mannequins. But when the first trick-or-treaters arrive, they confuse a costume of an alien for an actual Vexatonian, a species that blends humans into smoothies and that’s not allowed on Earth anymore. Swift and Jeremy follow the “Alien” to the house of a boy named Howard and when Swift hears Howard yell “No, not the blender,” he charges in with a device. Jeremy realizes what’s really going on before Swift does, who sees red liquid in a blender and assumes the Vexatonian has already blended up Howard. As he uses the device, Jeremy dives in front of it to save Howard’s brother from the effects. Howard thinks Principal Swift was pulling a prank on them, themed to the movie “Men in Suits” (a nod to Men in Black) and he pretends that’s what happened as he carries Jeremy home, who twitches from getting shocked by the device. At home, Swift cares for Jeremy when the doorbell rings and he compliments what he believes is a child dressed as a robot, giving them lots of candy. But as they leave, we see that this was actually a Vexatonian, who takes a sip from a red smoothie and says “Mmm, humaney.”

Another new episode of Gabby Duran and the Unsittables will premiere next Friday, October 15t, at 8:30/7:30 C, titled “Zeke to the Future.” Here’s the episode description from Disney Channel:

Gabby gets a history lesson when alien technology delivers a boy from 1821 to modern-day Havensburg. Gabby recruits her alien friend Rooney to help get him home.