Something wicked this way comes… and it’s night two of Disney week for Dancing With The Stars! This especially evil ep opened with Bruno’s villain origin story of not being invited to Disneyland (relatable) and Tyra entering in an Evil Queen/Maleficent hybrid look. (Have you started to notice that highlighting Miss Banks’ wardrobe is a must for me?) Now I don’t know about you, but I am always #TeamVillain so let’s get this show on the road. 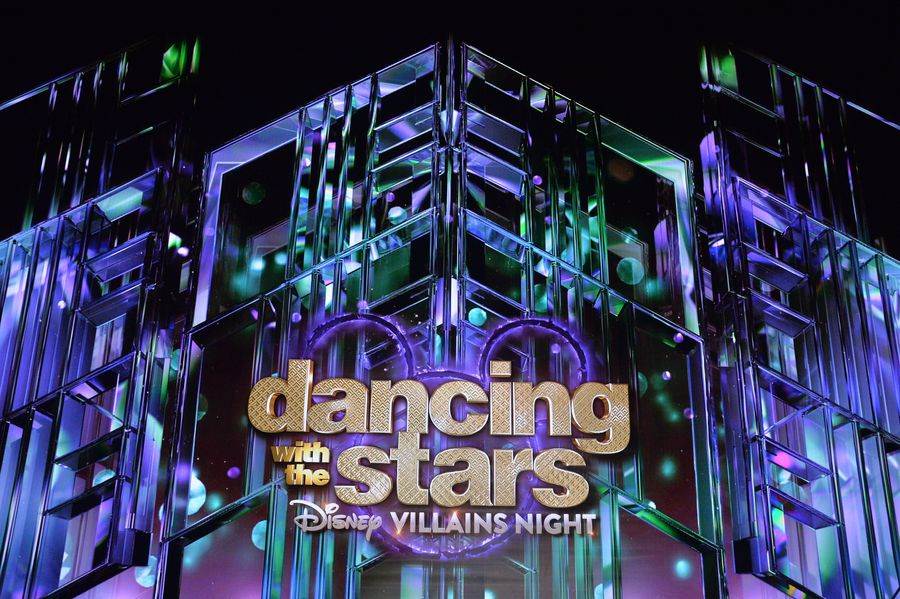 Jimmie Allen & Emma – Jazz – My fave opened the night by taking us off to Neverland! Tink vs. Hook to the styles of Billie Eilish wasn’t on my Disney villain bingo card, but I can’t say I’m mad. Bruno jumped out of his seat (but when does he not) and exclaimed, “You got me hooked!” Between the storytelling and Jimmie’s agility, it was a delightful dance. Judges Scores: 9 – 8 – 9 – 9

Cody Rigsby & Cheryl – Viennesse Waltz – The type-casting this week has been so on point! My fellow Gemini friend, Cody, managed to fit Gaston’s gigantic ego in the ballroom even with the huge set of antler decor. Whenever there’s a secret prop revealed and used in these brief numbers, I suddenly get intensely invested and this quick handkerchief did the trick. Still, this wasn’t my favorite of Cody and Cheryl. Derek mentioned they had the least rehearsal time this week (only three days due to their quarantine) so that may have been it. Judges Scores: 8 – 7 – 8 – 8

Melanie C & Gleb – Viennesse Waltz  – A Maleficent Waltz! Have I mentioned I LOVE DISNEY WEEK?! Sporty Spice sported the iconic horns and really brought the villainous vibes tonight. She accomplished an incredibly haunting portrayal and received some really positive feedback from the judges. Perhaps she cast a spell or two, because Maleficent got her highest scores yet. Judges Scores: 9 – 8 – 9 – 9

JoJo Siwa & Jenna – Pasa Doble – JoJo calling her haters “villains” is inspiring and all, but girl – it’s the theme! Get into it. Luckily, JoJo embraced the W-I-C-K-E-D as she and Jenna used the (underrated) Descendants soundtrack for their number. Carrie Ann really criticized this routine as “hectic,” but the rest of the judges (myself included) completely disagreed. Bruno called it “a pasa doble like no other!” See? Sometimes it’s good to be bad, JoJo. Judges Scores: 8 – 9 – 9 – 9

Kenya Moore & Brandon – Viennesse Waltz – When you think about it, there probably isn’t a more “Dangerous Woman” than the Evil Queen. Looking like something straight out of Mickey’s Fantasmic nightmares, Kenya brought a sensual energy to her movement tonight. Even opposite of her raven cutie, Brandon, this dance was still missing a bit of passion for me. By-the-book Carrie Ann took a point off for a minor lift (remember: that’s a thing with the waltzes), but they still got pretty great scores! Judges Scores: 7 – 7 – 8 – 8

Iman Shumpert & Daniella – Argentine Tango – Iman has an Aladdin tattoo. I repeat, Iman has an Aladdin tattoo. It turns out portraying the fellow tall king Jafar was not much of a stretch for Iman (haha!) because he truly nailed it. The couple moved with such powerful strides to “Arabian Nights” and captured a ferocity that Jafar and Iago could only wish to have. Ending with Daniella on his shoulders (a la parrot) was so clever and worth a couple of extra points if you ask me. Judges Scores: 9 – 7 – 9 – 8

Melora Hardin & Artem – Jazz – Channeling her Office character to embrace Mother Gothel is a choice, but apparently the correct one. In the category of animation, Melora understands the assignment and serves major Gothel grins. Just as the dance folds, Tyra casually reveals that Melora was behind the voice of this number as well. Hello!? Call Disney Cruise Line ASAP. Bruno was right when he said it: nobody delivers musical comedy better than Melora! And… she received the first ten of the season! Judges Scores: 9 – 10 – 9 – 9

The Miz & Witney – Argentine Tango – The Miz really said, “Let there be facepaint!” After last night’s convincing hero’s journey, this couple had a lot to live up to. Despite being a WWE antagonist, this performance fell a bit flat for me. The judges really loved it, but it was just not as impressive as last night’s Genie. Maybe I’m being too harsh, but he’s the one who pushed his brother off a cliff. Judges Scores: 9 – 8 – 9 – 8

Brian Austin Green & Sharna – Pasa Doble – Finally, they take the hint and stop making their dances about their romance and instead make it about their booty. C’mon guys, get your head out of the barrel: they’re being pirates this week! This pasa doble was the strongest performance of Brian’s by far. As the judges gave their feedback, he looked absolutely exhausted so I really believe he’s trying his best, but is it good enough? Judges Scores: 7 – 6 – 7 – 7

Matt James & Lindsay – Pasa Doble – I can’t lie and say I’m less engaged when it’s not a Disney tune. I mean, I’m glad Kaa finally got some recognition, but no “Trust in Me?” Boo. There were a couple of moments throughout this performance I felt like Matt was struggling to stay on the beat, but beyond that it was pretty good. Like Len noted, Matt could “give us so much more.” Judges Scores: 8 – 7 – 8 – 8

Olivia Jade & Val – Jazz – I would say get the tissues because it’s a Coco number, but it’s a jazzy rendition so we’re in the clear. From the classic Coco guitar to bunches and bunches of ovation-roses, this performance was full of props and me encantó! It wasn’t necessarily Olivia’s most stellar showing, but it was consistent and that’s key! I’m also so glad Val dedicated this dance to Hispanic Heritage Month. Judges Scores: 8 – 9 – 9 – 9

Suni Lee & Sasha – Viennese Waltz – Finally some spooky season representation! As “Spell On You” started, my heart raced thinking about the pair making it down the stairs in that fog, but thankfully everyone arrived safely. Suni as Winnifred was the perfect opportunity for her to lean into her sassy side and I am so glad her partner is there to make these very helpful choices. PS – Sasha’s cat exit was hilarious. Judges Scores: 9 – 8 – 9 – 9

Amanda Kloots & Alan – Pasa Doble – Call (Amanda), Cruella! ABC really stepped up their game with this pair’s wardrobe and rightfully so for the fashion icon. I gasped as the sudden arrival of the fabric pieces turned this pasa doble into a classic bull-fight. Len expressed he was “scared” of Amanda and that sounds like the ultimate praise on Villain's Night. By the way, is it okay to say that I might start a fanpage dedicated to Alan’s wigs? Judges Scores: 9 – 9 – 9 – 9

Although they escaped an elimination last night, the villainous couples are not so fortunate this time around. In fact, it’s a double elimination. Brian Austin Green and Sharna were the first pair eliminated. It’s sad we couldn’t continue watching their love story flourish, but it was their time to go. The remaining bottom two are revealed as Kenya Moore & Brandon and Matt James & Lindsay. And… Matt James & Lindsay are the ones going home this week. Don’t worry too much because you can catch his wonderful ex-girlfriend this time next week for the premiere of The Bachelorette on ABC!

Unfortunately, it can’t be Disney night forever, but DWTS returns next Monday with Grease night! Until next time, it’s been magical.