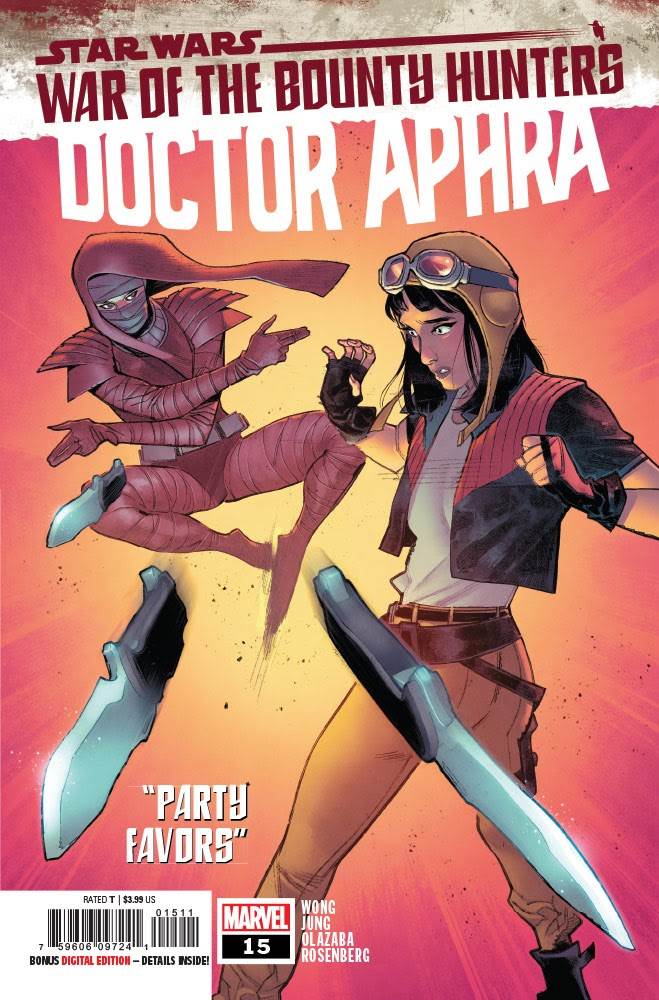 While the main Star Wars: War of the Bounty Hunters comic-book miniseries may have come to an end today, we still have a few tie-in issues to get through before this big crossover event is truly over. Thankfully, Star Wars: Doctor Aphra #15 doesn’t overlap with the events of the miniseries title almost at all, and is instead allowed to do its own thing as its characters scramble to escape Crimson Dawn’s flagship.

This issue of Doctor Aphra, entitled “Party Favors,” picks up where the last one left off, with Chelli and friends coming face-to-face with the assassin known as Deathstick as they attempt to evacuate the Vermillion on the planet Jekara. 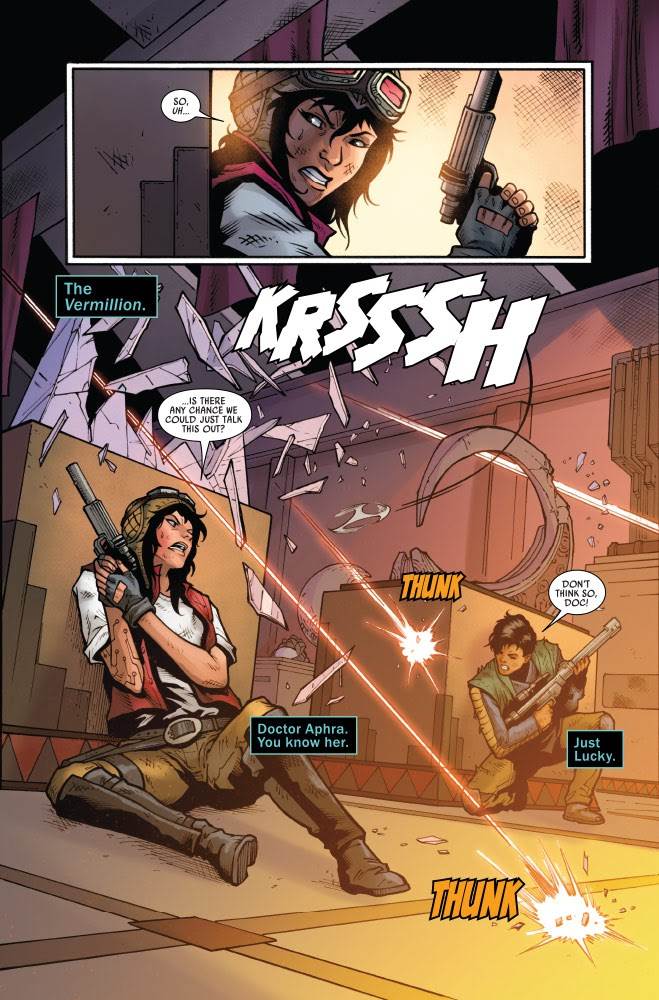 Aphra and her partner in crime Sana Starros find themselves cornered in Crimson Dawn’s on-board antique museum with their uneasy allies Just Lucky and Ariole Yu. Together they must face off against Deathstick and find a way off the ship, and Chelli’s knowledge of the surrounding ancient artifacts is the only thing that can save them. Aphra comes across something called a “Thought Dowser,” a piece of powerful dark-side technology (created by an extremely intriguing, extinct group of beings called the Ascendant, who I believe are referenced here for the first time in the current canon) that allows its user to manipulate the minds of others– capable of being wielded by non-Force users, but beyond deadly in the hands of the Sith. I loved seeing the aftereffects of Chelli’s utilization of this tech, and I have to wonder if the Ascendant are intended to show up somewhere else in the Star Wars chronology sometime soon, perhaps in The High Republic. 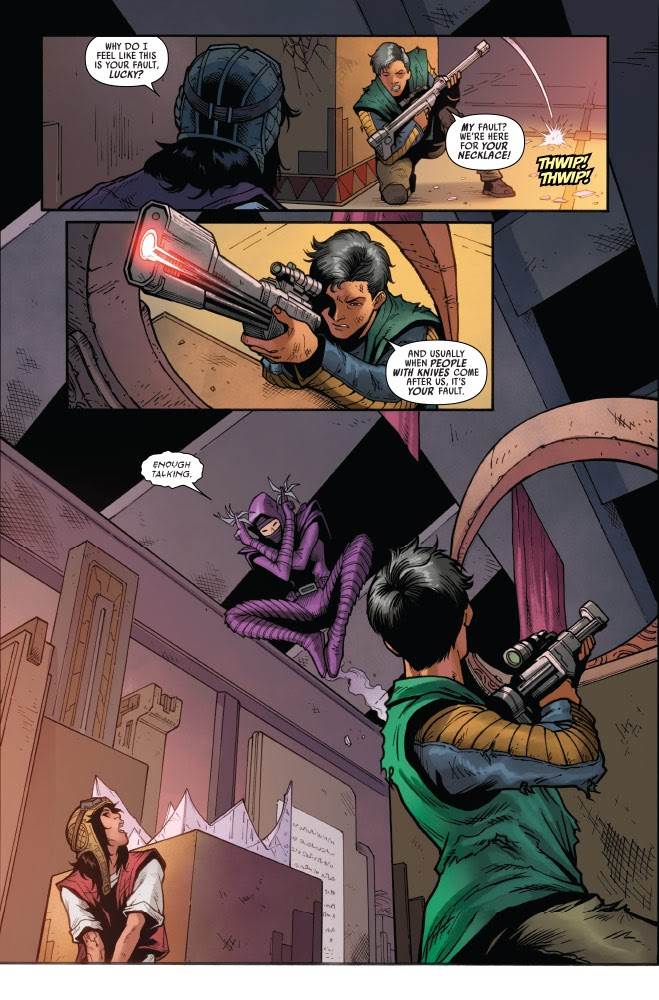 I haven’t found Deathstick terribly interesting as a villain just yet, but I feel that is more than made up for by the chemistry between Aphra, Sana, and their unlikely associates. And this issue feels like a bit of a catharsis as the Doctor Aphra title sheds its connection to War of the Bounty Hunters and hopefully moves on to more interesting things for its antiheroes, but there’s also a smidgen of a tease for Marvel’s next big upcoming Star Wars event, Crimson Reign, with Chelli discovering Crimson Dawn’s proliferation of spies throughout the galaxy’s many factions and organizations, Empire included. That last tidbit of info has already paid off in the finale of the miniseries, but I think we’ll be seeing it come into play quite a lot more as these comics set between The Empire Strikes Back and Return of the Jedi continue. Until then, I’m looking forward to seeing what else writer Alyssa Wong has up her sleeve now that Dr. Aphra and company can finally pursue their own paths once again. 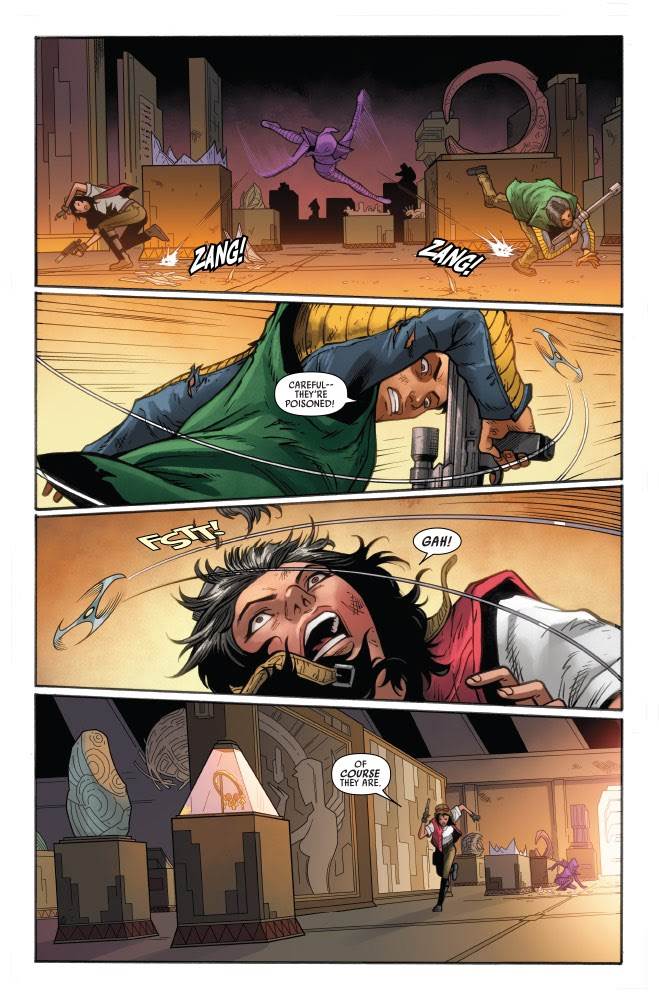