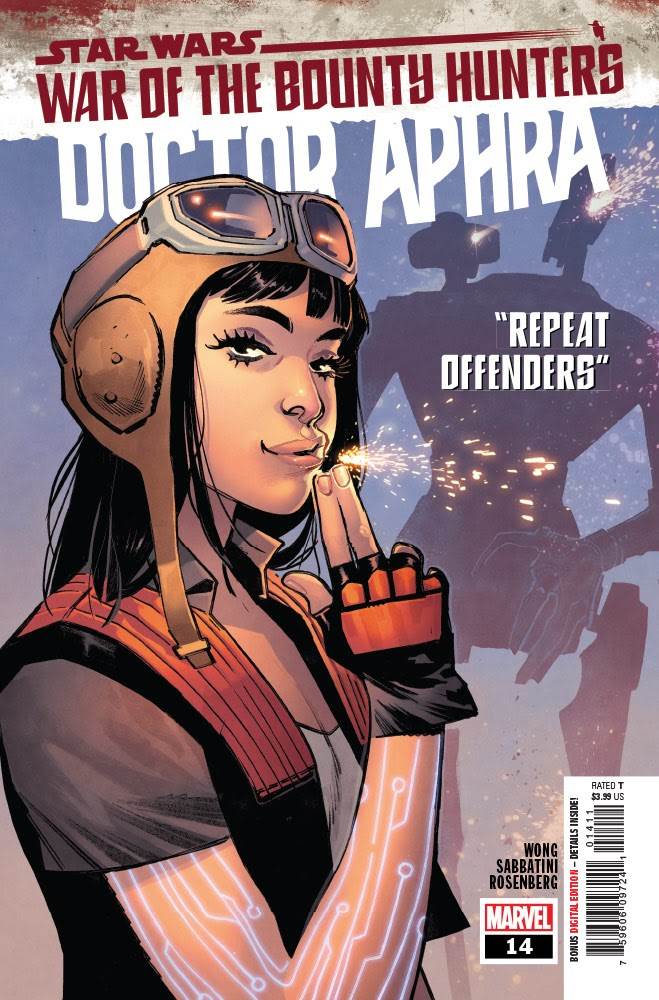 Of Marvel’s four ongoing Star Wars comic book series that are currently tying in with the War of the Bounty Hunters crossover event, Doctor Aphra has felt the least organic from the beginning. It shouldn’t come across as a stretch that rogue archaeologist Dr. Chelli Aphra would cross paths with all the interested parties vying for possession of the carbonite-frozen body of Han Solo, but for whatever reason her inclusion in the storyline has come across as a little forced.

In issue #14 of Star Wars: Doctor Aphra’s second volume, Chelli and her ex-girlfriend Sana Starros find themselves imprisoned in crime syndicate Crimson Dawn’s flagship the Vermillion after infiltrating the auction at which Lady Qi’ra sold Solo to the highest bidder. In the same cell, they find themselves face-to-face with assassin Just Lucky and his partner-in-crime Ariole Yu, who had traveled to the planet Jekara under different circumstances. 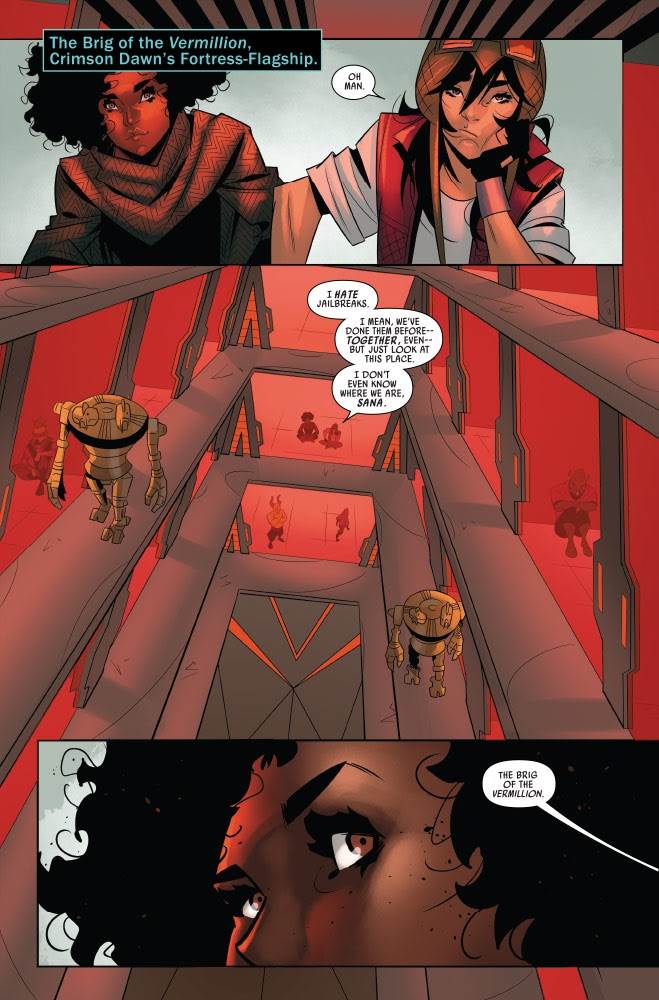 I suppose it’s somewhat satisfying that these characters have finally crossed paths after a number of issues following their separate adventures, and what better place to do it than on the ship where pretty much every notable persona in the galaxy has amassed for Qi’ra’s auction? They bicker back-and-forth about who is the least trustworthy, of course, and then after a confrontation with Sixth Kin lieutenant Gallin Crae they come up with a plan to escape using the giant security droids acting as sentries in the Vermillion’s brig. We see Aphra display her talents at haphazardly hacking robots while simultaneously leaving a wake of chaos in her path, and then we get a montage of sorts as this newly assembled gang of misfits make their way around the enormous ship, looting storage closets and armories in search of the necklace containing the information that was the target of Chelli’s original mission. I’d say it’s a fun enough caper, but it’s tough to generate authentic stakes when the protagonists never seem to be in any genuine danger. 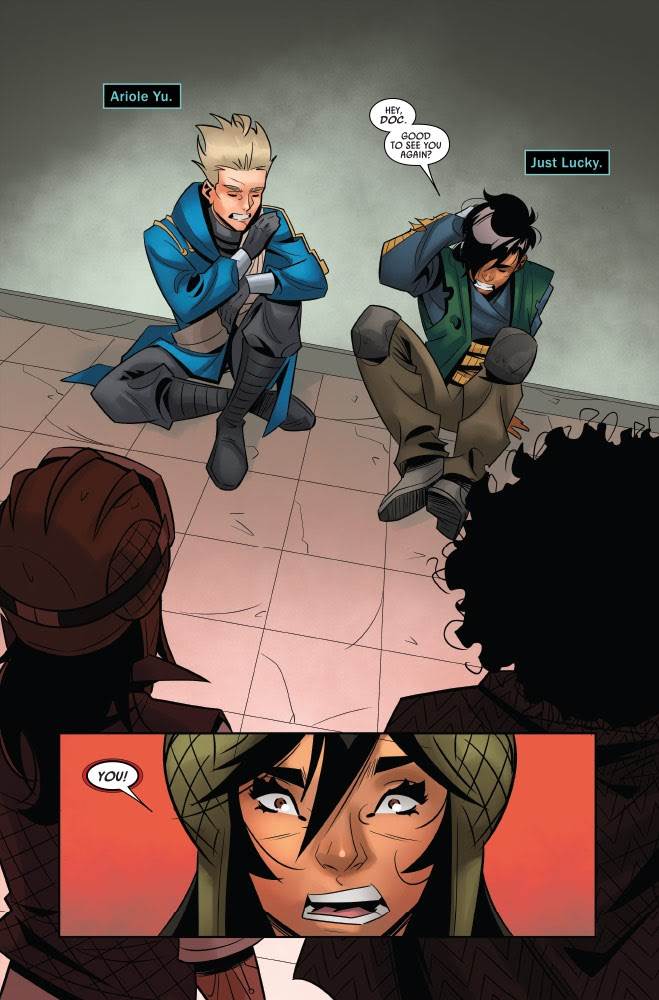 The climax and subsequent cliffhanger of this issue see our antiheroes spotting Qi’ra ordering a lackey to watch over the necklace while she returns to her party, and then the assassin Deathstick (who seems intent on popping up in each and every one of these titles as War of the Bounty Hunters progresses) pops up when they try to retrieve it. It’s a lighthearted, breezy read that maybe doesn’t deliver quite as much in the way of emotional or dramatic investment as its various Star Wars comic counterparts– but maybe that’s just Doctor Aphra’s M.O. Either way, writer Alyssa Wong seems intent on having Chelli improvise her way out of this situation until she can return to her own storylines free of the pressures of overlapping with this big event series. The illustrations by new artist Federico Sabbatini are a little too cartoonish for my tastes, but on the other hand they match the carefree tone of the plotting and dialogue, so I guess you could say there’s consistency on that end. But on the whole, I find myself missing earlier arcs when Aphra’s irreverent attitude was a refreshing counter to the more serious-minded events going on around her, rather than matching her laid-back narrative environment. 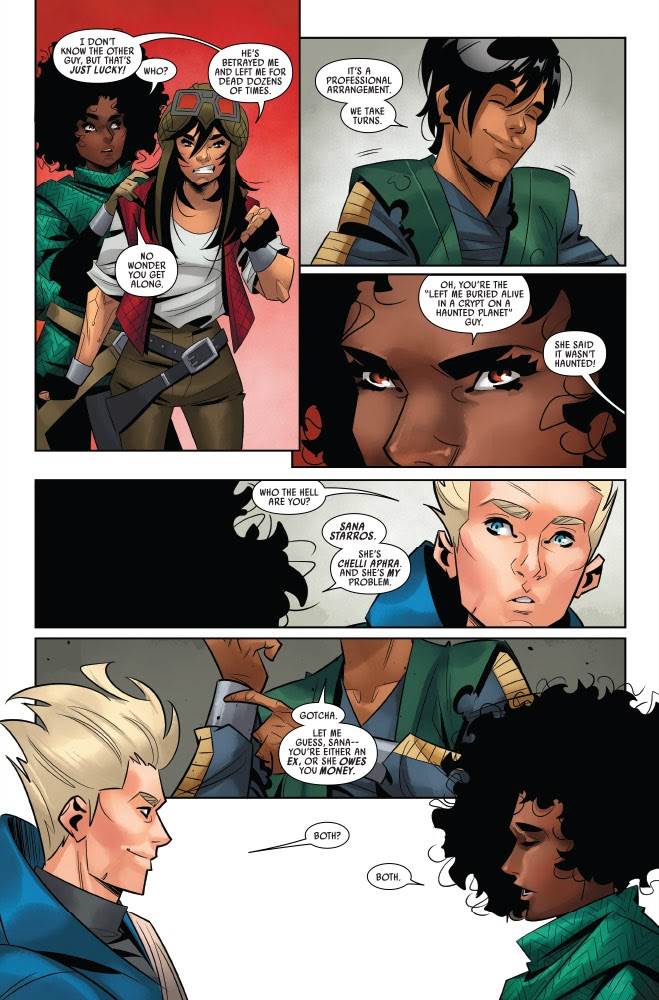