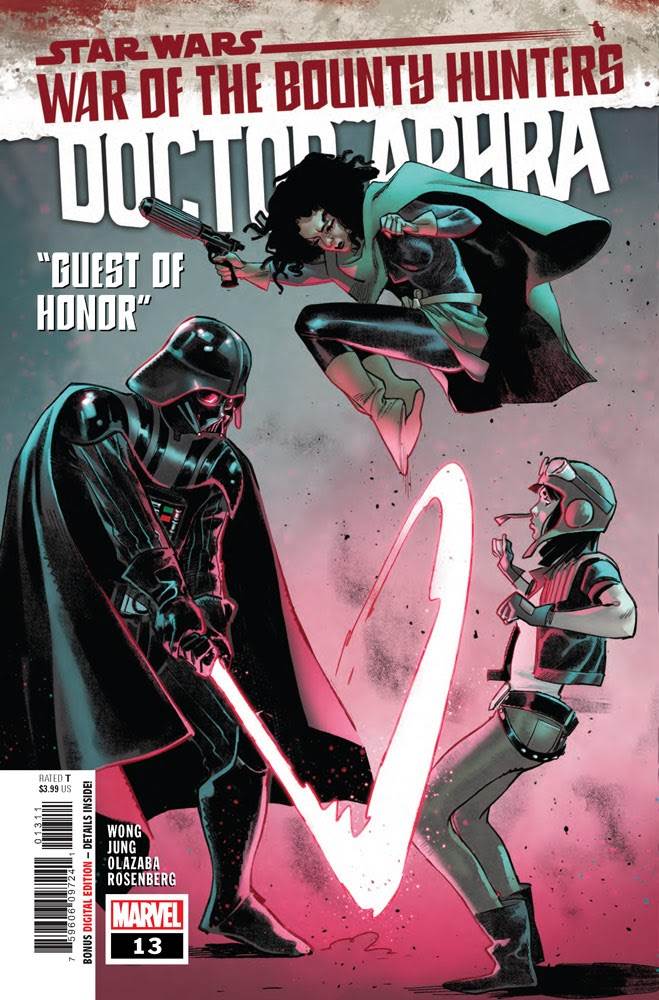 Last month I complained that issue #12 of Star Wars: Doctor Aphra overlapped a bit too much with the then-most-recent installment of Star Wars: War of the Bounty Hunters, in that they both showed the same events from Crimson Dawn’s auction of the carbonite-frozen Han Solo from slightly different perspectives. Issue #13, which came out this week, thankfully doesn’t fall into that same trap. It briefly touches on what we saw in War of the Bounty Hunters #3 (namely Darth Vader dueling with Crimson Dawn leader and Solo’s ex-girlfriend Qi’ra) and then sends Chelli Aphra and her partner in crime Sana Starros off on their own adventure within the crime syndicate’s flagship.

This installment of Doctor Aphra opens with a haunting flashback to the end of the ongoing comic book’s first run, when the rogue archaeologist abandoned her onetime boss Darth Vader for dead on the planet Tython. Then we cut to the “present day” and see more of Chelli and Sana’s reaction to Vader’s arrival at the auction, followed by them running off to complete the mission they were sent there to accomplish by aristocrat Domina Tagge. I was glad for the refresher on what happened last time Aphra and Vader came face-to-helmet with each other, but I also enjoyed that this issue actually moved these characters’ storylines forward in a somewhat meaningful way. They manage to complete their assignment, but in truly characteristic Aphra style decide not to settle for that alone, instead opting to explore and loot the Vermillion while they’re aboard and while everyone else is temporarily distracted. Meanwhile, the significantly less interesting subplot continues with smuggler Just Lucky and his compatriot Ariole Yu going head-to-head against Sixth Kin lieutenant Gallin Crae, who once served as their mentor but now they’ve been tasked with assassinating. Crae now finds himself aligned with Qi’ra’s resurgence of Crimson Dawn (much like Bokku the Hutt, as we discovered in this week’s issue of Star Wars: Darth Vader) and invites Lucky and Yu to join him. The conflict is interrupted by the seemingly ever-present assassin Deathstick, who opts to simply take in the pair after knocking them unconscious. 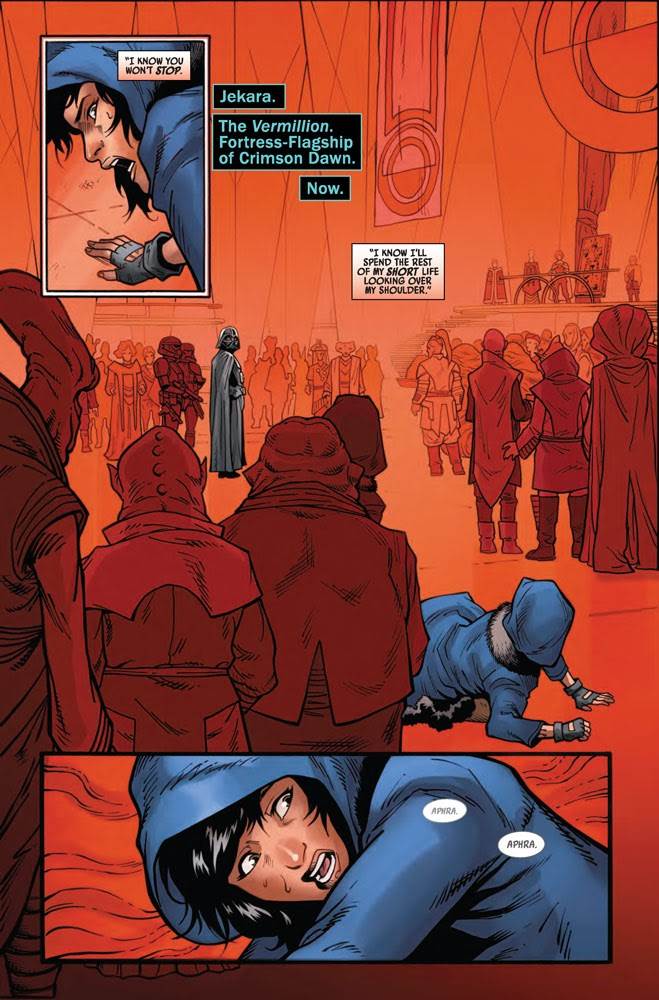 Naturally I’m much more engrossed with what’s going on between Aphra and Starros, especially after their foray further into the bowels of the Vermillion nets them only a confrontation with an enormous and very cool-looking security droid. The cliffhanger ending sees them thrown into a prison cell together (presumably still on the ship) and the reveal that there’s more droids where that one came from. It’s great to have this kind of forward progression in a crossover event that has often felt like it’s stalling for time in its many tie-in issues, and I’m looking forward to seeing how writer Alyssa Wong gets these two danger-prone adventurers out of trouble this time around. I would just ask that the cover art be slightly less misleading in the future.