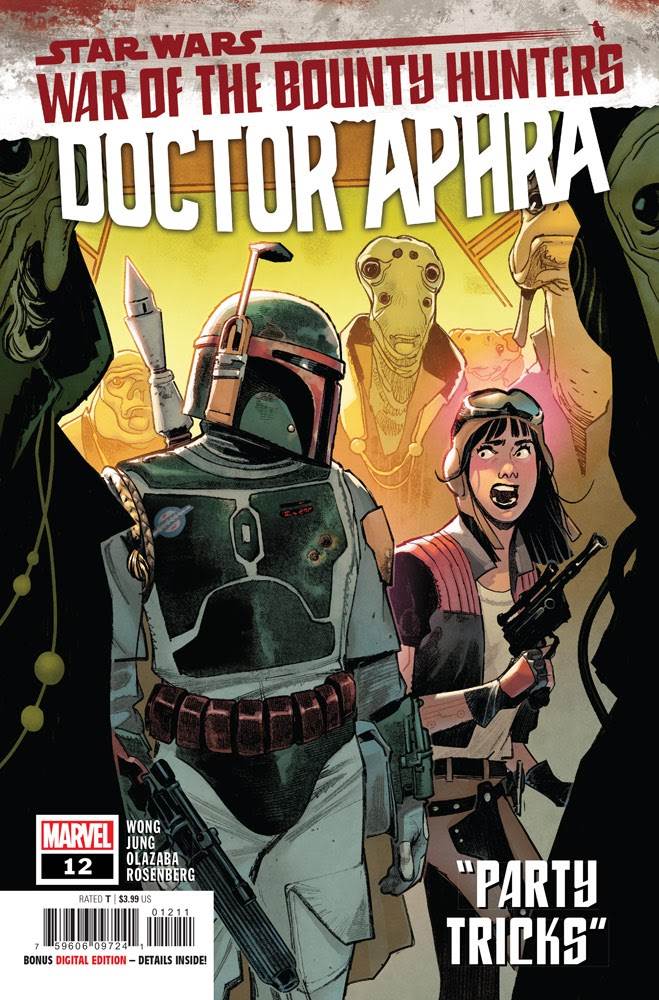 And in Star Wars: Doctor Aphra, volume 2, issue #12– also out today from Marvel Comics– we see that same situation play out, ostensibly this time from Chelli and Sana’s perspective, but in execution these scenes end up being a little too similar to what’s depicted in the other title. 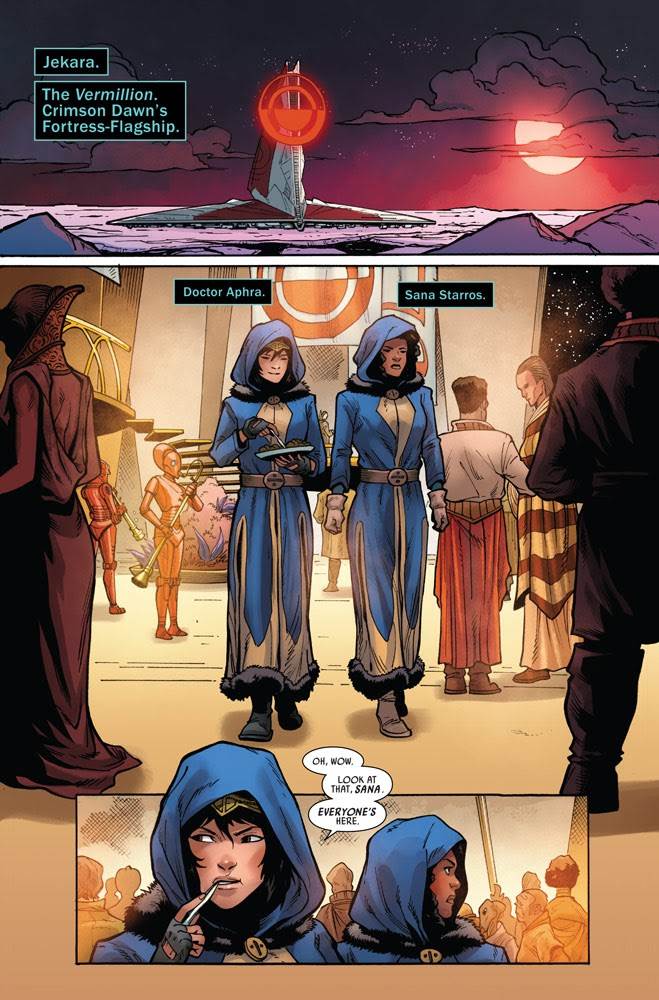 Admittedly, the gaps of Aphra and Starros’s story are filled in a bit before and after what we saw in War of the Bounty Hunters, and we do get an explanation of some of the otherwise head-scratching lines of dialogue spoken by these two characters in the miniseries issue. But outside of that, writer Alyssa Wong spends too much time rehashing their time at the bar discussing Crimson Dawn and interacting with a disguised Boba Fett. I can’t imagine any fans reading this run of Doctor Aphra are not picking up Charles Soule’s efforts in other Star Wars comics too, so the desire to repeat said dialogue (with different artwork by Minkyu Jung) just seems like an odd choice to me. There is also a subplot involving the assassin Just Lucky and his cohort Ariole Yu as they attempt to take out their former Sixth Kin mentor behind the scenes at the same party, but I still don’t find myself terribly invested in that particular storyline. 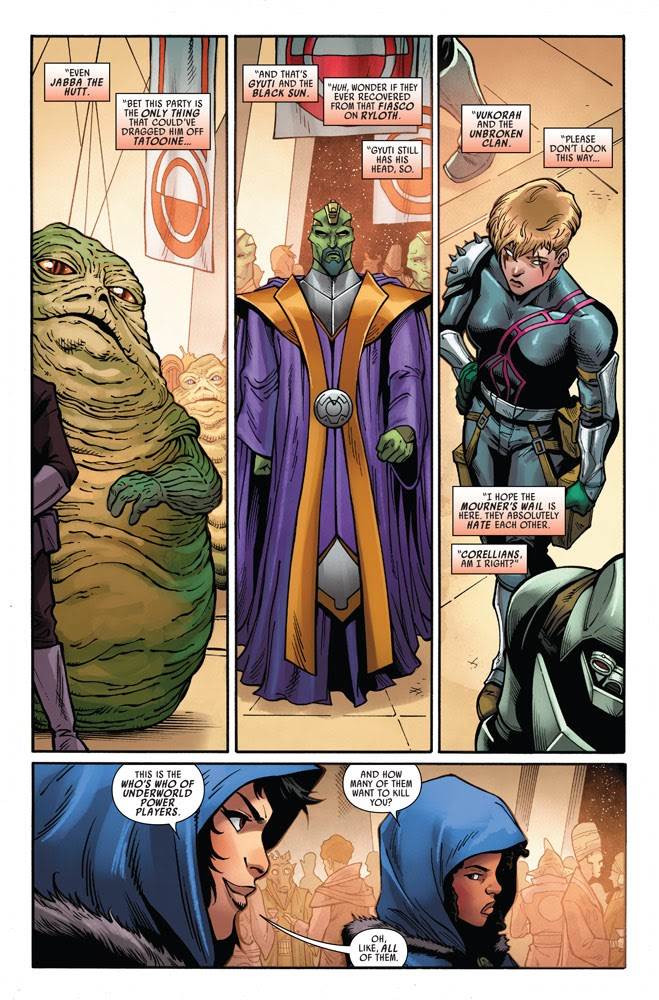 I did enjoy Aphra’s characteristically tongue-in-cheek enumeration of the varied organizations in attendance at the auction, and I was especially captivated by this issue’s last few pages (the only part of the comic that takes place after what we see in War of the Bounty Hunters #2), in which Chelli experiences something of a post-traumatic panic attack upon seeing her former boss Darth Vader make his presence known on the premises. The deep-red color work here by Rachelle Rosenberg helps accentuate the frantic quick-cut panels, and the final moment as Vader takes notice of Aphra sent a chill down my spine, because six years of reading these two characters’ interactions have taught me how poisonous they can be to each other. I also want to point out another minor example of false advertising on the main cover of Doctor Aphra #12, which shows Boba Fett and Chelli interacting in their usual outfits, which does not happen in this issue, as they are both undercover at the auction. I get that it’s a conceptual representation of the story’s contents– and I like the art– but it still bugs me a little. 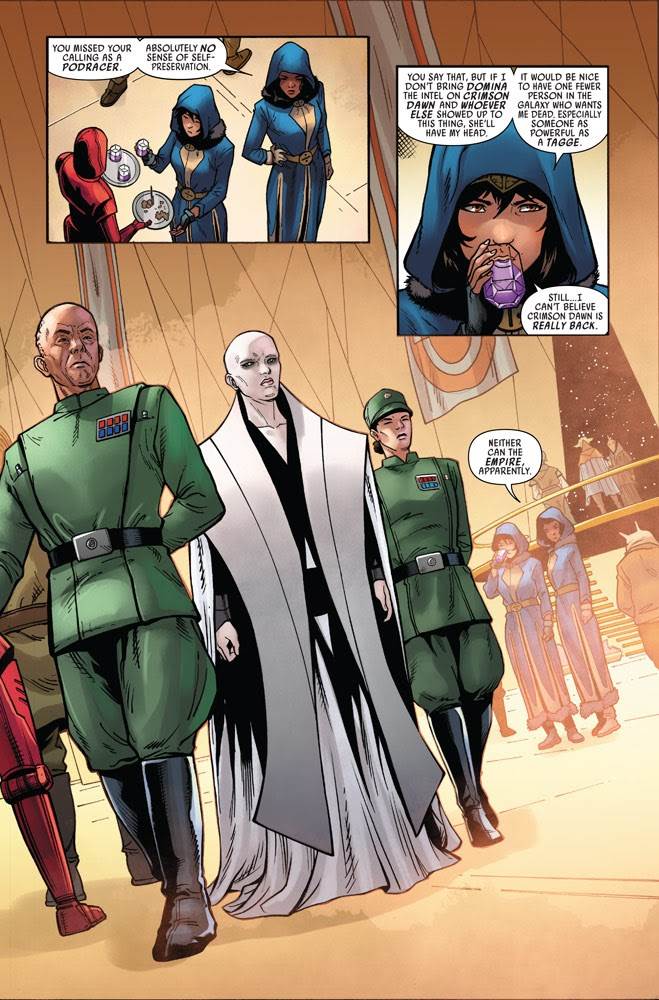