Hulu is bringing the true-life horror of Dopesick to television this week with the release of the first three episodes of the show on October 13. Starring Michael Keaton, this is a trip back in time to smalltown America where viewers will watch as each town is consumed by the lies of OxyContin and the destruction it brings to millions. Freddy Krueger and Jason Voorhies might be the most visible symbols of terror this Halloween season, but nothing is more frightening than Big Pharma’s desire for profits. 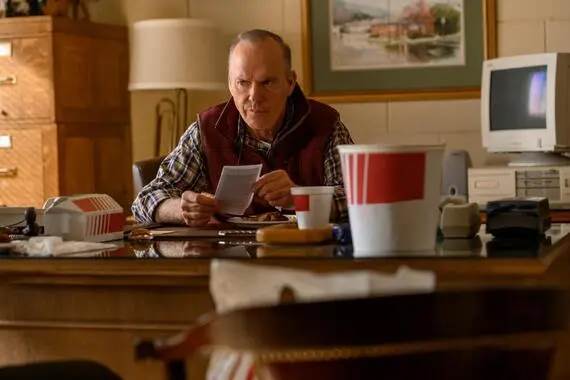 It’s 1986 and Richard Sackler (Michael Stuhlbarg) a member of the wealthy family that owns Purdue Pharma is railing against the medical community for ignoring the plight of the average citizen’s chronic pain. He wants to create a new drug that would finally address people’s long term chronic pain.

In 2005, Assistant United States Attorney Rick Mountcastle (Peter Sarsgaard) is leading a cross examination of doctors asking when they first heard of OxyContin. The doctors testifying, including Dr. Samuel Finnix (Michael Keaton) mention how pain was a buzzword, and that for Finnix himself, he can’t believe how many people are dead because of the drug.

Back in 1996, we are in small town Virginia, where the mine is the main employer of the town, and we meet Dr. Finnix operating his medical practice. He is your typical smalltown doctor, with a nurse, and a penchant for making house calls on his elderly patients to ensure they are taking their medication properly.

Across town, we meet the Mallum family. Jerry and his daughter Betsy (Roy McKinnon and Kaitlyn Dever) work in the mine while Diane (Mare Winningham) has their dinner prepared each evening. This devout Christian family gives thanks for the mine and all that it offers the family and town, but Betsy has a secret. Afraid to tell her family that she is gay, Betsy is in a relationship with her coworker Grace (Cleopatra Coleman). An injury at the mine will place Betsy on a collision course with OxyContin.

Developing as super drug is not a cheap endeavor and the Sackler family is questioning the amount of money Richard is spending on this new wonder drug, but he won’t be stopped.

In 2002, we meet Rick Mountcastle as he prepares to investigate Purdue Pharma and the effect OxyContin has had on the district. Taking direction from the United States Attorney John Brownlee (Jake McDorman), Mountcastle with his partner Randy Ramseyer (John Hoogenakker) take their first step into the murky world of OxyContin. They meet with DEA agent Bridget Meyer (Rosario Dawson) who vaguely hints at her frustration about her own stalled investigation of OxyContin.

In 1996 Purdue is assembling the largest sales force to win the friendship of every country doctor around the nation. Billy (Will Poulter) is one of many sales representatives from Purdue that ventures out and meets with Dr. Finnix. Armed with scientific data and an FDA label that says less than 1% of patients will become addicted to this new opioid called OxyContin, Billy meets a skeptical but receptive Finnix. Believing that it’s safe, when the Mallum family calls about Betsy’s pain from the recent injury at the mine, Finnix prescribes OxyContin. 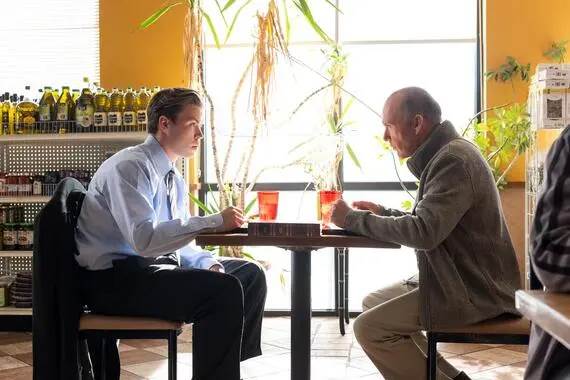 The initial sales numbers are in for OxyContin, and while they are reassuring, Richard Sackler wants to do better. Sales representatives from Purdue are sent back out to their doctors to talk up Oxy.

Billy meets with Dr. Finnix again and informs him that doctors can double the prescription for patients. While Finnix questions the facts behind this new revelation, we see how Purdue has coined a new phrase in the public relations campaign for OxyContin, breakthrough pain. According to Purdue, some patients will have breakthrough pain and will thus need a doubling of their prescription.

Bridget Meyer starts her investigation in Kentucky at a local pain clinic. As she tours through the clinic waiting room, the patients all look strung out. When she foils a mugging intended to steal someone’s OxyContin prescription, Bridget quickly learns that OxyContin is not just for pain management. The teenaged mugger tells her that most of the kids at his school are addicted Oxy.

Back in 1996 Dr. Finnix is seeing improvement with his Oxy patients. Abandoning his misgivings, Finnix starts to bond with Billy, as they share lunch together. While Dr. Finnix is trying to connect with the young sales rep, Billy see’s Dr. Finnix as a cash cow. Billy informs Finnix of the benefits from attending a weekend seminar hosted by Purdue in Scottsdale, Arizona.

While Rick and Randy navigate an attempted shut down by the Department of Justice, they do learn that the warning label which the FDA approved for the OxyContin, may have been pushed along for approval with little oversight.

Dr. Finnix makes his way to Scottsdale where he meets other doctors and sales representatives. Finnix is encouraged to participate in a town hall presentation with Billy where he thanks the company for providing the relief that his community needs. Meanwhile, Purdue executives are getting ready to roll out the 80 mg tablet of OxyContin. The sales numbers for OxyContin are astounding. 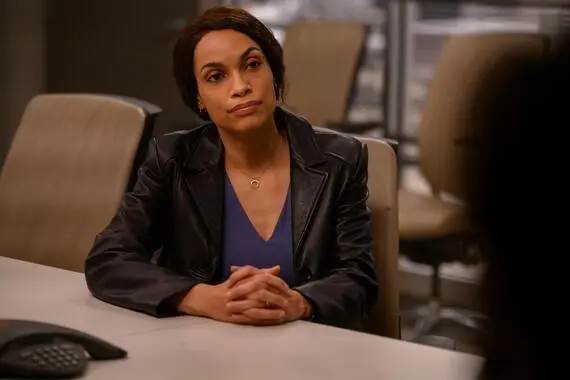 It’s 1999 and we watch a thief smash through the window of a pharmacy and steal all the OxyContin they can carry. While crime is spiraling out of control in relation to OxyContin, Purdue backs a new notion that is being championed by pain advocacy groups. Pain is now regarded as the 5th Vital Sign.

Back in 1997, Betsy Mallum is feeling much better and Dr. Finnix wants to start tapering her off OxyContin. Betsy trashes her pills in a nearby dumpster, thinking she is good without them. Purdue has other plans for doctors and the public. To help boost the consumption of the drug, doctors are now being told to individualize the dose for their patients. Purdue reasons that not all pain is the same for every person. Doctors are encouraged to give higher prescriptions then what was initially recommended.

Success in America has emboldened Richard Sackler. He wants to introduce OxyContin in Germany, one of the most restrictive bodies in Europe. While Purdue plots on how to crack the German market, Billy returns to visit Dr. Finnix.

While enquiring about his patients, Finnix tells Billy that he is currently tapering off one of his patients from Oxy. Billy explains from what he has been told by Purdue that a patient using 60 mg or less can quit the drug cold turkey without any withdrawal effects. Betsy is not so lucky.

In 2003 Rick Mountcastle is seeking access to Purdue documents but is quickly denied his claim in court. Purdue lawyers successfully fend off the attack and claim that Purdue should be receiving a Nobel Prize for eliminating pain.

Randy undergoes cancer surgery and in recovery he is prescribed OxyContin, which he refuses. When Rick comes to visit his partner at the hospital, the two learn how far a reach Purdue has in the hospitals. From the pain charts to the posters on the wall, Purdue is directing the distribution of their drugs and pain management from behind the scenes.

1999 brings us back to Bridget Meyer’s investigation. Crimes in rural areas are out of control, and while investigating a pharmacy robbery, Bridget learns from the pharmacist that he didn’t want to carry OxyContin but felt threatened by the sales representatives that he would be sued if he didn’t carry the popular medication.

Trying to help Betsy come out to her parents, Finnix takes Jerry Mallum fishing. They talk about Betsy’s injury but when Finnix broaches the subject of Betsy being gay, it feels like Jerry is accepting of his daughter’s sexual orientation. When Jerry returns home for dinner, he informs his daughter about his chat with Finnix and then tells his daughter that it would kill him if Betsy was gay. Betsy, in the middle of Oxy withdrawal, comes out to her parents and announces plans to leave.

Upset by what her parents say, Betsy tries to retrieve the pills she threw into the dumpster at Dr. Finnix’s office. Seeing the empty bin, she returns to work the next day, in serious withdrawal and pain, and causes an explosion in the mine which injuries others.

Bridget Meyer is convinced that OxyContin is a bad drug and gets promoted to Deputy Director of Diversion in the DEA. She turns in her gun to work the desk and begins her quest in earnest to remove OxyContin from the streets. Her professional success is met with engagement to her boyfriend.

Rick Mountcastle seeing the mountain of circumstantial evidence building in his case decides to infiltrate the Appalachian Pain Foundations info session. Sitting in the audience, Rick quickly sees that the nonprofit foundation parrots the talking points of Purdue about OxyContin. Rick and Randy learn that Appalachian Pain Foundation and a host of other non-profit pain foundations are funded in one way or another by Purdue. With this mounting evidence Rick is successful in court and gains access to the promotional material, funding, and distribution of OxyContin from Purdue.

Dr. Finnix travels to visit with his sister-in-law. They have a pleasant visit where they talk about Finnix’s wife, and how it’s time for the doctor to start dating again. Finnix leaves content with the blessing only to get into a car accident. Finnix breaks four of his ribs and is prescribed OxyContin for his pain.

Dopesick catches your attention from the first moment of the show and won’t relent on the impending disaster that OxyContin will cause in small town America. I would equate the situation to being on the Titanic and noticing an iceberg in the distance. Disaster is on the horizon and the collateral damage that OxyContin abuse will swallow is immeasurable.

Michael Keaton and Kaitlyn Dever are the stars for the first three episodes. Their experience with OxyContin is from different perspectives but audiences will ache with their characters as we witness what the drug will do to them and their families. Everyone knows how the story will unfold, with little chance for a happy ending, audiences should feel compelled to see Dopesick through to the end.