Hello and welcome to the penultimate installment of Laughing Place’s recaps of the science-fiction/drama series Y: The Last Man. Episode 9 of the now-cancelled show, entitled “Peppers,” was released today via FX on Hulu. “Peppers” begins with Agent 355 running drills back and forth outside the farm home, and she starts to get flashbacks to her youth. Inside the commune, Yorick and Dr. Mann are surprised to find that the ex-convicts living here celebrate birthdays every Saturday. When Sarah returns to the party, Y asks her to dance, but she refuses until he goads her into it. While they’re dancing, Dr. Mann approaches one of the residents and confronts her: “What’s your deal?” She gets told off, and later we see 355 preparing lunch and one of the women reveals she found a tracking device in Sarah’s RV, saying that she should tell Yorick about it. 355 pockets the device when Y enters with marijuana and takes the other woman with him. We see more brief flashbacks to Sarah’ youth and her interactions with her mother.

Next we see Hero wandering through a giant underground bunker called the “Hall of Voices,” where men’s voicemail messages are played over loudspeakers. Outside, she meets with Athena from the PriceMAX and tells her that everyone there is unarmed. “Now is the time,” she says, as Athena runs back to find Roxanne and her forces, some of whom are on horseback. “These women build a shrine to men,” says Roxanne, “They are mourning a world that hurt us.” Roxanne convinces Nora to join in on the raid: “Let’s go have some fun.” They invade the shrine, which we now see is called the “Museum of Men,” wreaking havoc and destroying food and property. Nora gets upset by this and warns Athena to stop, while inside Roxanne destroys the sound system. “We could have traded that. All of this had value,” says Nora angrily to Roxanne. Mackenzie enters and tells Roxanne her tent is ready, so she leaves grinning while Nora resentfully watches her go. In the Pentagon, Regina Oliver addresses a soldier who has lost confidence in President Brown, while Kimberly files her nails. Oliver is planning a coup and yells at Kim, who is mourning the loss of her mother, to get it together: “I need you.” Kimberly finds a shard of broken glass on the floor and stares at it. We cut to Beth and her insurrectionist friends preparing to break into the Pentagon. They set off an explosion in a tunnel, and then we see Christine talking with President Brown about how she would kill to eat fresh vegetables. Brown gives her a can of oranges, and Christine begins crying, revealing to the president that she’s pregnant. “I always wanted to have kids someday… this could be my only chance.” President Brown says Hero was the best decision she ever made, and then two soldiers come to retrieve her and bring her to the war room.

In the war room, Kimberly and Oliver confront Brown about Yorick having survived the cataclysm. “Tell them to stand down,” Brown says about the soldiers. Kim blames brown about her mother’s death because she made her feel crazy. Kimberly tells Christine she needs to come clean: “The order came through you.” Kim says when people find out about what they’re hiding, Christine will be torn limb from limb. “Leave her out of this; she didn’t know,” Brown says in defense. She explains how Yorick was found in New York and that Agent 355 was bringing him to Dr. Mann. “I did what I thought was best for all of us. The best thing to do was keep the circle closed.” Kimberly yells at her about selfishness: “The future of the human race depends on his survival and you sent him out there with one person?” One of the soldiers accuses Brown of ordering the death of the two helicopter pilots, which she denies. Oliver says President Brown is to be put in protective custody and removed from her position. 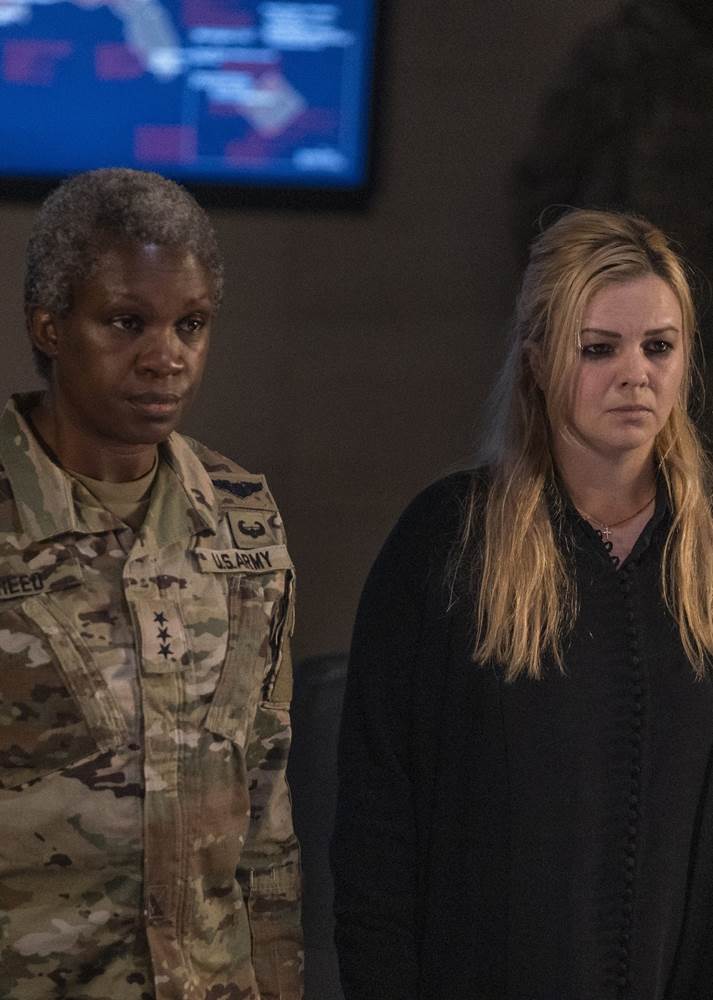 In the underground tunnel, two other soldiers are killed by the explosion set by the group breaking into the Pentagon, and the group in the war room are interrupted by the noise. Everyone is brought to a secure location as the revolutionaries make their way in through the smoky tunnel. Beth is disturbed by the deaths they caused, but she still heads in with the others, as she’s the only one who’s been inside previously. The president’s group is being led through a hallway when the lights go out, and the soldiers leading them come face-to-face with the insurgents. The soldiers stand down and surrender to the extremists, who put the president and the others into binders. Brown recognizes Beth, but she signals for her not to tell anyone.

Outside the Museum of Men, Hero is shocked to find out that everyone knows about her having accidentally killed her coworker, since she had told that to Roxanne in confidence. Nora overhears and tells Hero that she used to get so angry at her husband over nothing. “I had the husband, the kids, the house, the job… it wasn’t enough. I am who I am… I’m angry. It’s what kept me alive. Next time, don’t tell Roxanne your secrets. She’s not worthy of them.” In the Pentagon, the politicians argue about how they got into this situation. When Kimberly signals to outside help that they’re being held captive, the extremists demand to know which is president: Jennifer Brown or Regina Oliver. Brown steps up and says it’s her, and one of the insurgents demands to know where the supplies are. “Jennifer Brown doesn’t speak for anyone. I’m the president,” says Oliver. 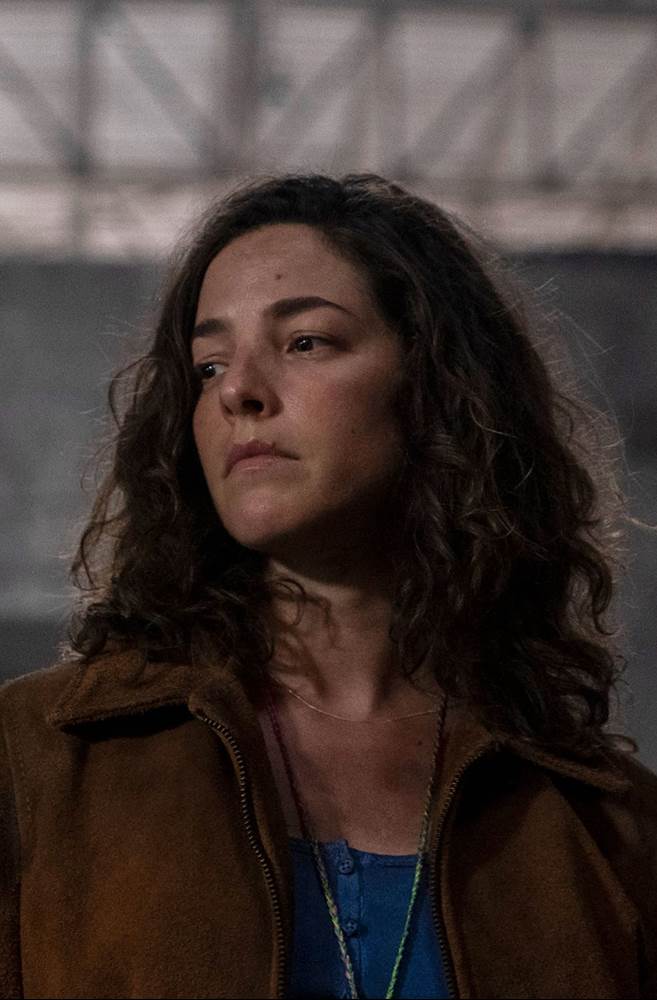 Arguing breaks out and one of the extremists fires a shot into the ceiling to get it to stop. They take the hostages and move into another room, setting a pile of records on fire before they leave, including Kimberly’s photo of Yorick. While they’re on the move, Oliver accuses Brown of knowing what was coming and during her tirade one of the insurgents shoots her in the head. Beth is furious about the additional death, but the extremists won’t back down. At the farm house, Sonia tells Y that his hands are disgusting and begins giving him a manicure and hand massage. Yorick deflects her advances and asks how the convicts escaped from the prison and came to be in possession of these houses. Sonia relates the story of their escape and continues massaging Y’s hands. Meanwhile, Dr. Mann tells Agent 355 how she was occasionally forced to experiment on herself.

Mann says she has designs on sleeping with one of the other convicts named Dominique, and defends her choice by saying that the woman was only a getaway driver. “It’s not like she killed anyone.” Sarah has more flashbacks to her youth, and we see the tracking device being given to her by a mother figure. “You did everything you were supposed to do. Most never make it past the screening, let alone training,” the woman says to Agent 355 in the flashback. “This is your leg up in a world that isn’t built for you. You earned your place here.” Later, Sarah is running outside again when she goes down to a stream and smashes the tracking device with a rock. In the Pentagon, Beth and her friends are arguing about what they’re going to with their hostages when tear gas starts seeping in through the vents. More women are shot on both sides, and in the chaos Beth takes President Brown to another area. 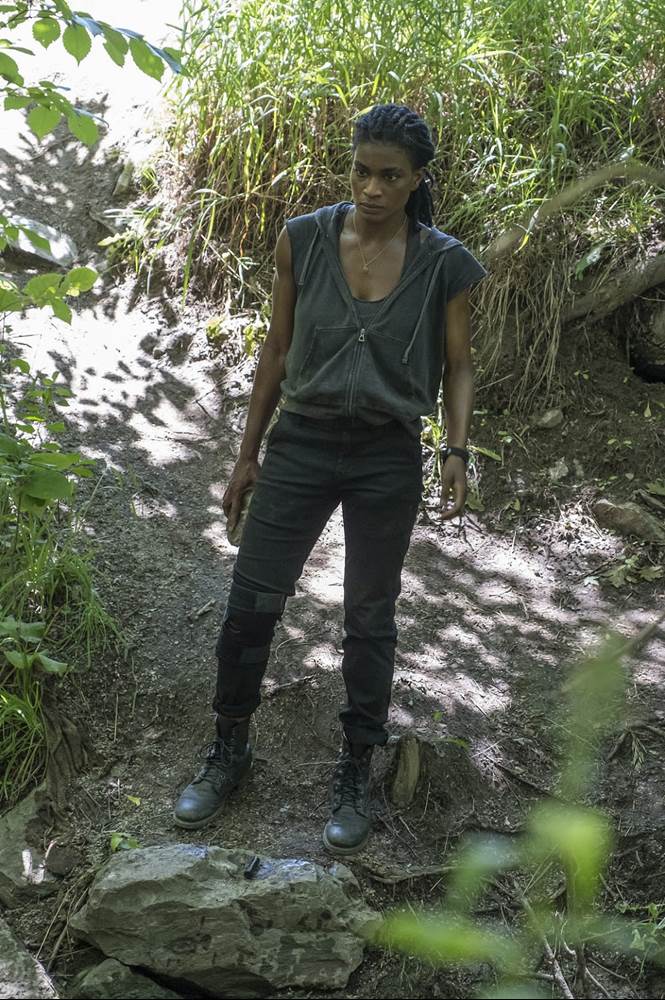 Kimberly and Christine find themselves confronted by one of the extremists, and Kim stabs the woman in the side to prevent her from harming the pregnant Christine. At the museum, Roxanne says they’re going to track down all the men who survived and take them out, but Nora argues against it. Roxanne tells Nora to leave, but Nora speaks with a woman who saw Yorick in Boston who tells her that Y and 355 wound up in a small town with electricity. Nora approaches Roxanne and tells her she was right and that they should track down Yorick first. “He’s nearby. He can’t hide… not from us.” At the Pentagon, President Brown leaves with Beth, who demands to know about Yorick.

The season/series finale of Y: The Last Man will be released Monday, November 1 via FX on Hulu.