Preview – Two Championships Will Be on The Line at UFC 267

The UFC returns to Fight Island tomorrow night with stacked pay-per-view card that includes not one but two championship fights. This card may not be loaded with the most recognizable names for casual fans, but it does feature a lot of great matchups that should lead to some very exciting contests.

The reigning light heavyweight champion will look to keep his crown as he takes on a perennial contender who will be trying to finally grab that brass ring. Plus, an interim championship will be on the line as two of the best bantamweights in the world will square off and two top lightweights will look to inch closer to a title opportunity of their own. The lightweight division is perhaps the most talent rich in the UFC, and yet Makhachev is still touted as the next big thing. The 30-year-old sports an impressive 20-1 record and is riding an eight-fight winning streak, including a submission victory over Thiago Moises in a main event in July. That win marked his ninth by submission which proves that he is a very dangerous grappler. The scary thing about him though is that he is perhaps even more dangerous in the striking game. Going up against Makhachev is a real “pick your poison” kind of situation.

His opponent offers a lot of the same problems though. Hooker comes into this contest with a 21-10 record, with 10 knockouts and seven submissions. He did suffer a bit of a setback recently, taking losses against top lightweights Dustin Poirier and Michael Chandler, before bouncing back with a win just last month. Now, he’s going to look to kick off a winning streak and put a big feather in his cap by knocking off Makhachev. With both of these guys being so talented in a lot of different aspects, it will be interesting to see their gameplans for this fight.

My pick: Makhchev via decision

If there is a more exciting and explosive fight the UFC can make right now, I don’t know what it is. Both of these guys are lightning fast and can stop a fight at any second. Yan is, by most accounts, the rightful bantamweight champion, only having dropped the belt because of being disqualified for an illegal knee. Now, he will get a chance to secure a shot at getting his belt back by putting the interim title around his waist.

Meanwhile, Sandhagen is as exciting and explosive as they come. Prior to his split decision loss to former champion T.J. Dillashaw in July, he scored two knockout victories in a row. But it’s not just that he won by knockout, it’s how he knocked his opponents out. First, he landed a spinning wheel kick against Marlon Moraes, which led to a TKO. Then, he hit all-time great Frankie Edgar with a devastating flying knee that put him to sleep instantly. Both of these guys possess some serious knockout power and they’re likely going to be willing to stand and bang, which should be a whole lot of fun to watch.

My pick: Yan via Decision 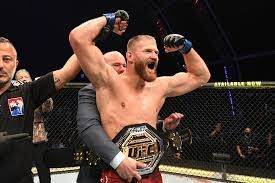 The UFC’s light heavyweight division has been one of the most prestigious in the sport. With former champions like Chuck Liddell, Randy Couture, Rampage Jackson and Jon Jones, adding your name to that list is a highly coveted prize.

And yet, for some reason, current champion Jan Blachowicz doesn’t seem to have the respect that typically comes with that title. Perhaps it is the absence of dominant former champion Jon Jones, or maybe just that he doesn’t have the recognizable name, but one thing is for sure, he is a very worthy champion. Blachowicz is riding a five-fight winning streak and enters with a 28-8 record, eight knockouts and nine submissions. His last win came over middleweight champion Israel Adesanya, who is currently the fourth-ranked pound-for-pound fighter in the world. Despite that, he still sits at number seven himself. All Blachowicz can do to earn that respect that comes with this title, is keep successfully defending it against whoever is put in front of him.

And this time around, the guy in front of him is an incredibly dangerous knockout artist. Teixeira comes into this fight with a 32-7 record and 18 knockout victories. Perhaps more impressive is that he will be stepping into the octagon for a championship bout at the age of 41. The veteran has scored some big wins in his career, but UFC gold has always eluded him. Now, he has the chance to change that and add his name to the record books.

My pick: Blachowicz via 4th round knockout