TV Recap: Season 2 of “Gabby Duran and the Unsittables” Ends with a 1-Hour Epic Finale

Season two of Gabby Duran and the Unsittables came to a close with a supersized episode called “The Fault in Our Star Night.” Have you ever wondered what would’ve happened if Gabby never became an alien babysitter? Well, wonder no longer with our recap of the season finale on Disney Channel. 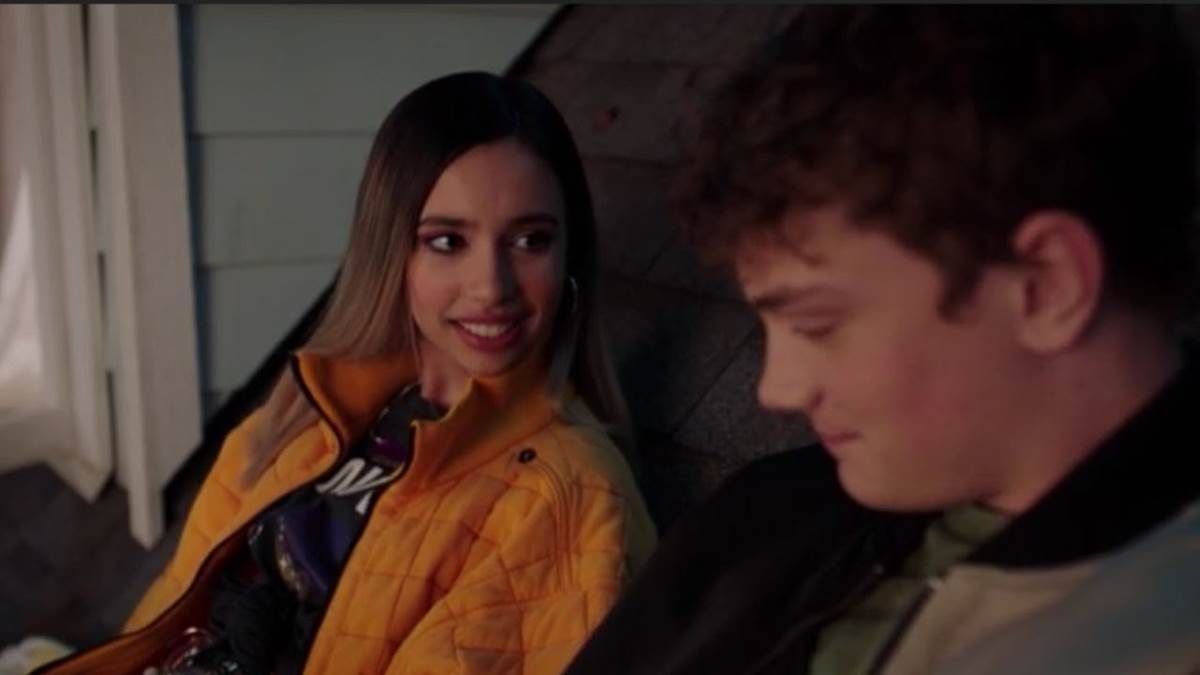 While at Lucachos with Jeremy, Gabby Duran meets a cute boy and gets distracted by him. When an order of nachos ends up all over her shirt, he hands her a napkin and she is smitten. But up above the earth, we hear a voice say “It has begun, Gabby Duran must be stopped.”

At school, Principal Swift gives Gabby a babysitting assignment for Friday night, a 9-month-old Tekazillion named Celeste. He also asks her to give a tour of the school to a new student, enticing her by saying it will get her out of class. The new student is the boy she met at Luchachos and his name is Leo. During the tour, they pass posters for Star Night, a meteor shower viewing event at school on Friday night that’s supposed to be romantic. It seems like Leo is going to ask Gabby to go with him, but the bell rings and he disappears in a crowd of students.

That night, Wes and Sky have a date at Luchacos and she tells him she wants to share their first kiss during Star Night. She then reveals that as a telepath, when she kisses him she will be able to see all of his memories and he’s nervous about it.

The next day, Gabby tells Wes about meeting Leo and having the moment interrupted, he tells her about Sky wanting to kiss him and his fear of sharing his memories with her. They are interrupted by Leo, who approaches Gabby and invites her to Star Night with him. She is over the moon about it, but Wes reminds her that she has a babysitting job. “I’m canceling that babysitting assignment,” she says. “I’m going to Star Night with Leo and nothing’s going to stop me.” Suddenly, everything freezes and three golden beings appear in the hallway. “Gabby Duran, you can not go to Star Night with that boy,” the leader says.

The aliens are the Defenders United Maintaining Balance (D.U.M.B.), who tells Gabby that they’ve been watching her. They’ve calculated the risk and if she goes to Star Night with Leo, it will kick off a series of events that upsets the balance of the entire universe. Gabby protests, but they bring up specific incidences from her time babysitting aliens as reasons why she can’t be trusted to make the right choice. They tell her that their decision is final and she is not to tell anyone about this.

While babysitting Celeste, a cute little tentacled baby, Gabby gets an idea to work around D.U.M.B.’s orders. She invites Leo over and sits with him on the roof with a baby monitor to check in on the baby. When the baby monitor alerts Gabby that the crib is empty, she rushes in to find Celeste only to see her on the outside of the window crawling up to the roof. Outside, Gabby tries to reach Celeste just as Leo comes around the corner and sees the alien baby. Celeste falls off the roof and freezes in mid-air. D.U.M.B. has paused time again. “You disobeyed our orders and now you must face the consequences.”

Wes visited Astra, who helped him sweat out his embarrassing thoughts. But he got mad at her when she revealed that this was the first of several sessions and it will take weeks to get rid of all of his embarrassing memories. At Star Night, Wes and Sky sit on a blanket and he suggests that they put off their kiss for a few weeks. She tells him she likes him for him and nothing she sees will change that, but time gets paused before they can kiss.

Leading up to the freezing of time, Jeremy told Swift that he wants to go to human school and Swift gave him a series of simulated tests, which Jeremy passed. In the end, Jeremy was given a school I.D. and Swift was putting a backpack on him when time stopped.

On Celeste’s roof, D.U.M.B. tells Gabby that they created this babysitting assignment in an effort to prevent her from going to Star Night with Leo. As a result of her inability to listen to them, they will now have to reset her memory, which will make Gabby forget her knowledge of aliens and her friends in Havensburg. “Goodbye, Gabby Duran,” the leader says. Time moves backward and the next thing Gabby knows, she’s in the car with her mom and Olive on their move from Miami to Havensburg.

Two years later, Gabby Duran is a delinquent at school. She snuck in at night and adjusted the water flow on the drinking fountains, making them shoot outside of the basin. A security guard finds her and as she tries to escape, Gabby slips in the water and gets caught. At home, Dina tells Gabby that she can’t keep behaving this way. Gabby tells her mom that she hates Havensburg and Dina says if she messes up one more time, she will have to go to Miami to live with her dad. Olivia calls Dina on a walkie talkie and we see that her windows and door are boarded up and she’s afraid to leave her room because Gabby pranks her so much. Dina reminds Gabby that they have family therapy tomorrow at 4:00 pm.

At school the next day, Gabby makes a comment about how lame the upcoming Star Night is going to be when Susie overhears her and tells her it’s not lame. She’s showing around the new student, Leo, and tells him to avoid Gabby, who is rude to her. In response, Susie calls over the principal, who is a woman and not Swift. The principal threatens Gabby with another detention and after she leaves, a student bumps into Gabby and we see that it’s Wes, who is now a football jock and Susie’s boyfriend.

In class, a teacher assigns the students a writing assignment about a moment that changed their life. Wes begins to write about the day his parents gave him a football, which they did to cheer him up when nobody signed up for his Mysteries of Havensburg Club. In the previous timeline, Gabby is the only one who signed up and it’s how they became best friends. Without her signing up, he discovered football, became a jock, and stopped pursuing his paranormal interests.

Gabby plans to get herself expelled and sent back to Miami by increasing the brightness on the field lights at school and disabling the school’s ability to shut them off, which will ruin Star Night. She records a video of her doing it, which she plans to send in. However, while doing the wiring, she gets an electric shock and falls of the ladder. On her fall down to the field, she suddenly sees memories she didn’t know about: visions of aliens and Wes that she doesn’t understand.

Back inside the school, Gabby finds Wes and tackles him into a closet, telling him about her memories and that she feels like he can help her. He tells her he doesn’t believe in paranormal stuff anymore and when he says “Gabby, Gabby, Gabby,” she gets memories of Principal Swift. She asks Wes about the former school principal and he tells her where she can find him.

Swift is now a waiter at Luchachos and when he comes to take Gabby’s order, she says “You’re an alien and we need to talk.” Gabby waits for him to have a break to meet behind the restaurant, missing the family therapy session, which was with “Dr. Skysdad” (aka, Sky’s Dad). Swift tells Gabby that he came to Earth with his nephew Jeremy and got fired from being the school principal because he couldn’t find a babysitter for him or other alien families. He was fired from both jobs and Jeremy is now in the care of Glor-Bron. Gabby tells Swift they need to work together to make a better life for each other. Gabby goes to Jeremy’s house and asks if she can come in, but he throws her out because he doesn’t trust humans.

When Gabby gets home, Dina tells Gabby that since she missed the family therapy, she’s made up her mind to send Gabby back to Miami in the morning to live with her dad. Gabby starts to cry now that she remembers her other life and promises to be better, but Dina won’t listen. “Trust me, this isn’t something we’re doing lightly,” Dina says. “The decision is final.” The words her mom says trigger memories of D.U.M.B. and Gabby now realizes why she has this new life. She asks Dina to let her go to Star Night, saying it’s the last thing she will ever ask for. Dina refuses, but Olive calls her upstairs on the walkie talkie and we hear Dina yell as a door slams. Olive rushes down and tells Gabby that she hears a change in her and trusts her not to prank her.

Gabby goes to the football field with Swift and gets up on the bleachers. She announces that aliens are real and instruct Swift to transform, but he’s nervous to do it. The security guard approaches Gabby to apprehend her and Wes finds himself uncontrollably standing up, throwing a football at the guard and knocking him down. Gabby tells Swift about the better life he had in her memories and he summons the strength to transform, exposing the existence of aliens to the students of Havensburg Middle School. As she predicted, time freezes.

D.U.M.B. has appeared on the field and Gabby tells them that no matter how many times they reboot her, she will find her way back to aliens until they give her the life she had back. She suggests that their calculations about her meeting Leo were wrong and they agree, giving her a second chance. Suddenly, time is restored back to Star Night.

Swift finishes putting Jeremy’s backpack on and gives him a hug. Wes and Sky sit on their blanket at Star Night and share their first kiss. Sky smiles and Wes is relieved. Because Celeste doesn’t exist, Gabby and Leo watch the stars from a blanket on the football field too. They hold hands together and watch the stars. Leo doesn’t see or hear his phone on the blanket behind him ringing.

That’s a wrap on season 2 of Gabby Duran and the Unsittables, what do you think of that ending? We’ll all have to wait to find out what happens next when season 3 starts sometime next year.