Izzy Newton and the S.M.A.R.T. Squad: Newton’s Flaw is the second book in a fun new fiction series by author Valerie Tripp and published by National Geographic Kids. 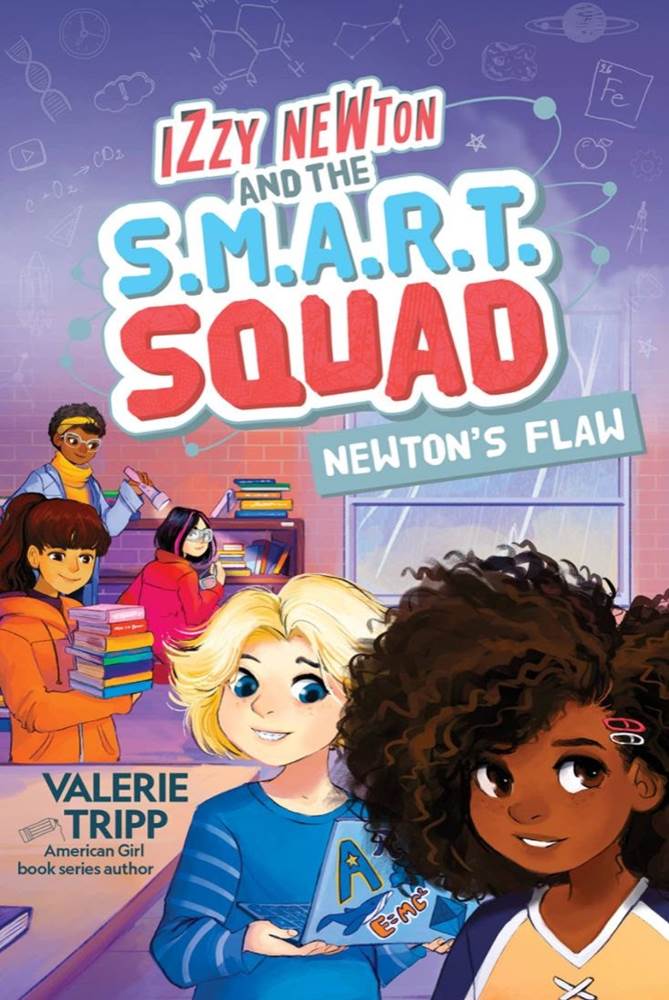 What is Newton’s Flaw about?

Science reigns supreme in the adventures of Izzy Newton and the S.M.A.R.T. Squad. With their first mystery solved and first-day jitters triumphantly behind them, Izzy and her pals—the Solving Mysteries and Revealing Truths (S.M.A.R.T.) Squad—start to settle in to the normal day-to-day at Atom Middle School. Izzy even works up the courage to try out for an all-boys sports team. Things are going well until a mysterious illness threatens to shut down the media center—and maybe the entire school.

The S.M.A.R.T. Squad is on the case in a race to figure out what ails them. But that's not all. A pop-up science fair causes excitement and tension for the Squad. And Izzy's failure to speak up in her speech class feels like an obstacle she can't overcome. Can the girls pull together to solve the media center mystery? Will their STEM smarts help them rock the science fair? Or will Izzy Newton's flaws mean the end of the S.M.A.R.T. Squad?

Izzy Newton and the S.M.A.R.T. Squad does a whole lot more than just tell good stories

This series does a whole lot more than just tell good stories. The characters themselves are inspired by various geniuses throughout history which is an enriching nod to lessons learned from those who have come before us. The author strikes a great balance between establishing character personalities and dynamics (which makes for fast-paced and witty fun) and the problem-solving component of the story.

A lot of Newton’s Flaw is told through dialogue between each of the characters – Izzy Newton, Marie Curie, Allie Einstein, Charlie Darwin, Gina Carver – which will make young readers feel immersed in the friend group and in the action. In addition to dialogue, Newton’s Flaw also includes reports conducted by the characters. In this way, readers learn how to structure a simple experiment: making an observation, forming a question, forming a hypothesis, conducting the experiment, and analyzing the date and drawing a conclusion. This format – as well as letters, diagrams, tables and illustrations – makes for even greater immersion. Perhaps my favorite part of the book is “The Truth Behind the Fiction” section which explains the play of “Newton’s Flaw” on Isaac Newton’s Laws of Motion, as well as truth behind the specific science and scientists referred to in the book. Valerie Tripp has said that she writes for “young readers because [she] think that there’s something about being involved in children’s literature that nurtures optimism.” She goes on to say that “[c]hildren are the very embodiment of promise and potential (wacky though they are) and those of us lucky enough to be involved in children’s literature are right there, right on the spot, to witness how books and stories nourish their growth.” Tripp provides so much potential for learning, growth and experimentation through Izzy and the gang. Science, tech and girl power rule in the next great adventure of the S.M.A.R.T. Squad and beyond. Young readers are invited to join in on Izzy’s story while also making discoveries for themselves and learning about what interests them. National Geographic Kids and Valerie Tripp are a force to be reckoned with when it comes exploring the world and why kids (and parents and guardians) should care. For all these reasons, I cannot recommend Izzy Newton and the S.M.A.R.T. Squad: Newton’s Flaw highly enough.

Izzy Newton and the S.M.A.R.T. Squad: Newton’s Flaw was released on November 23rd.