Live in Front of a Studio Audience returns to ABC on December 7th for its third iteration, this time recreating episodes of The Facts of Life and Diff’rent Strokes. Executive Producers Jimmy Kimmel, Norman Lear, and Brent Miller recently joined together for a virtual press conference ahead of the big event to talk about the new special, which stars Jennifer Aniston, Kevin Hart, John Lithgow, Kathryn Hahn, Gabrielle Union, Allison Tolman, Damon Wayans, and Ann Dowd. 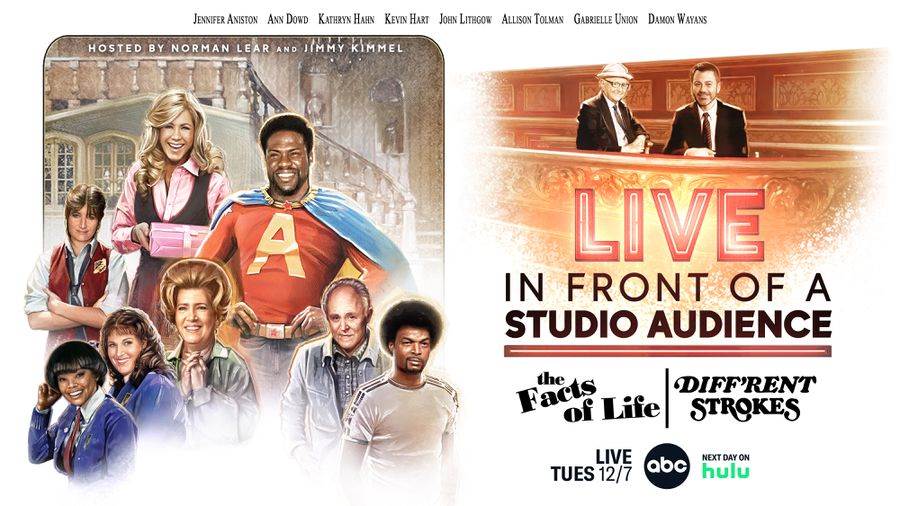 “It has to be a show that people love,” Jimmy Kimmell explained about how shows are selected, with previous adaptations including All in the Family, The Jeffersons, and Good Times. “It's not just a show that was popular, but a show that they love and that means something to them. And I think all of the shows that we've done so far absolutely fall in that category. I think it's important that the shows be shows that you know the names of every lead character without having to think about it, without having to look it up on Google. And I think these shows definitely fall into that category… These are the shows that, when you're a teenager in the '80s, not only did you watch the shows, you learned how to be a teenager from them. And those are the shows, I think, that get people excited about seeing them as adults and get the actors excited about playing them as adults.”

In Live in Front of a Studio Audience, adult celebrities play youthful characters. “It's a creative conceit that Jimmy thought of from the very beginning,” Brent Miller shared about the decision. “I'll admit that I, at first, took a pause because I didn't know how to take it other than I love the idea of Kevin Hart [playing] Arnold Drummond. And then it just all started to unravel, and it felt like this is actually a brilliant idea. And now, as we've seen these two table reads, it proved itself that Jimmy was spot-on with his thought.” Norman Lear echoed those feelings when he added “The two table reads have been fabulous.”

“It's so funny and so different how much more enthusiastic they are about working with Norman than they are about working with me,” Jimmy Kimmel joked about the casting process, saying that he gets turned down a lot on Jimmy Kimmel Live! “For a lot of these people, I think they just want to meet Norman and spend time with him. And that's how I feel about it too because this is a lot of work. And Brent does a tremendous amount of the work, but it's a lot of work for us too. And I know it's a cliche to say it's a labor of love, but it really is that for all of us. Nobody in this cast gets paid anywhere near what they would get paid to do something like this. Everyone is doing it because of their respect for Norman and their admiration for what he's done and how important he is to the history of television and as a human being as well because he is something else.”

Live in Front of a Studio Audience: ‘The Facts of Life’ and ‘Diff’rent Strokes’ promises lots of surprises, one of which was recently revealed, the addition of Jon Stewart to the cast. “We're not going to reveal any more of the names until the show,” Jimmy Kimmel stated when asked about who else might turn up. “We always like to make sure the original [actors] are included in some way if that's possible and if it works for the show. And I think that the actresses who played the parts are all pretty excited about seeing The Facts of Life. I don't want to speak for them, but I suspect that they're flattered by the caliber of talent that we got to play these roles that they created.”

“Many years ago, Gary Coleman was selling a pair of his pants on eBay, and I purchased those pants from him and they hung in our studio for around ten years, much like a championship pennant would at a baseball stadium,” Jimmy Kimmel revealed about his reverence for these sitcoms, which he grew up on. “They had so much to do with why I love television. To me, the most magical thing, really, is to be on the set, because for the most part that's the only original character in this production is the set, which our set builders duplicate exactly. And it is such artistry, and it's so amazing what they do in such a short period of time. When you walk onto that set, it really is overwhelming.”

Television fans can relive the magic of these two classic sitcoms in a whole new way on Tuesday, December 7th at 8/7c on ABC with Live in Front of a Studio Audience: ‘The Facts of Life’ and ‘Diff’rent Strokes’. The special will also stream on Hulu beginning December 8th.