“John Hoffman told me from the beginning that Jan was the murderer,” Amy Ryan revealed about her character in the Hulu original series Only Murders in the Building. The murder mystery comedy starring Steve Martin, Martin Short, and Selena Gomez became this fall’s runaway hit. “I tried to forget that in the process of filming the scenes because I was so afraid to tip it with a sideways glance or any kind of inflection in a line,” Amy Ryan continued about her character’s surprising reveal. She recently reunited with fellow cast members Nathan Lane and James Caverly for a virtual press conference to celebrate the show’s runaway success. 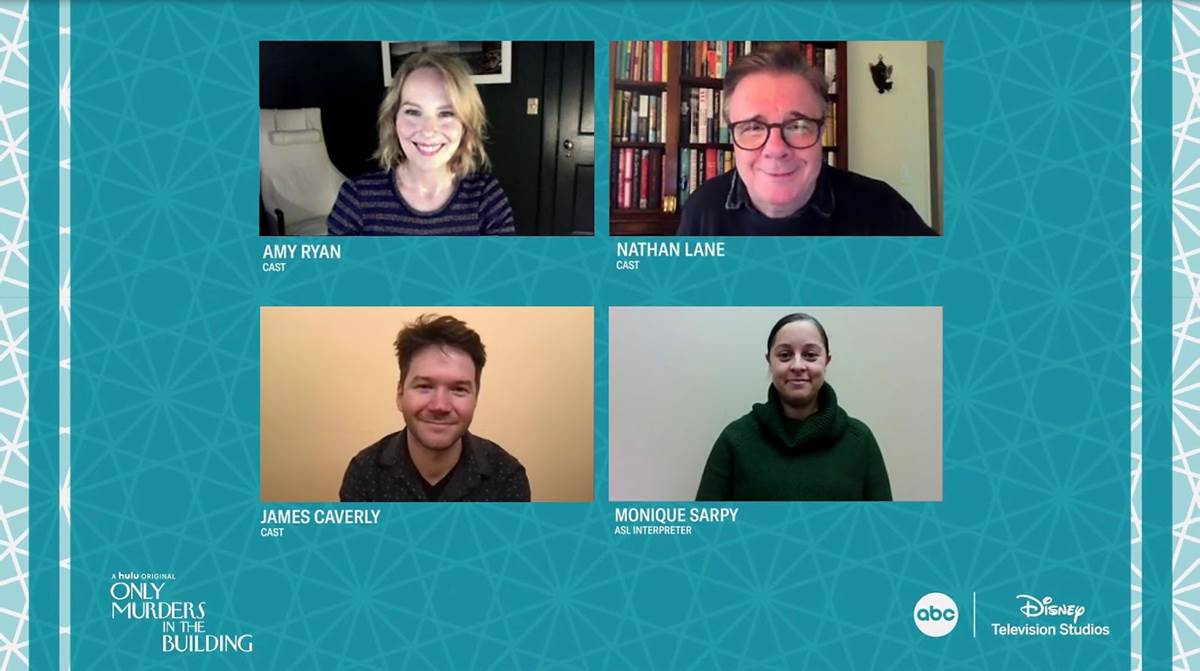 Ever the scene-stealer, Nathan Lane shared how he got cast in the series. “I know Marty and Steve,” the legendary star of stage and screen explained. “I knew that they were working on this and were going to start shooting and then I got a call about it.” For James Caverly, who played Teddy’s son Theo, the process was less informal, but he was thrilled nonetheless to join the cast. “I moved to New York City, believe it or not, two weeks before the COVID-19 pandemic hit,” James Caverly revealed through an ASL translator. “I was able to pick up little bits of work here and there until I had this. Only Murders in the Building was a really big break for me as a newcomer to the city.”

All three actors realized pretty quickly that the show had become popular thanks to strange requests coming from viewers, including a question about where one can procure the tiles from Charles-Haden Savage’s kitchen (it’s actually linoleum). Nathan Lane experienced a FedEx driver calling him “Murders” and asking to take a picture with him. “I think people were really charmed by the show, and certainly, the reaction I have gotten has been extremely positive,” Nathan added.

“From the deaf communities, I've received a lot of positive feedback about the show, and most of the positivity was towards Nathan and his sign-language acquisition,” James Caverly revealed. “And many folks didn't realize that Nathan only had two or three months of very intensive ASL instruction with our director of artistic sign language, Douglas Ridloff, and really worked hard to do sight translation of the script. And sometimes the script was changing, and that's really hard. And one of my friends said, ‘Nathan has signing grace just like a ballet dancer.’ And, so, I guess Nathan's musical performance background was a huge benefit to this show.” Nathan Lane was flattered by the compliment and added “James was incredibly helpful and supportive to me through the whole process.”

With audiences falling in love with Teddy and Theo Dimas, an obvious question for fans of the show is whether or not they will pop up in season two. “We are not allowed to say under pain of death,” Nathan Lane joked. “A Dimas spinoff would be really spectacular. Look, I had a great time and in particular, working with James. He's a really gifted young actor, and he really knocked it out of the park with his performance, especially in episode seven.”

Speaking of episode seven, titled "The Boy from 6B," James Caverly revealed that he felt the weight of the episode on his shoulders. “ I was told that the episode was going to be from my perspective and I thought, ‘Oh, boy, this is a tall order for me,’” the actor shared. “I thought to myself, ‘This could either go very badly or it could go very well.’” Thankfully for all involved, the episode went extremely well and became a fan favorite.

The big question hanging in the air following the end of the first season is who killed Bunny? “I think anything is a possibility in our crazy building, everyone is a suspect,” Amy Ryan answered, unable to clarify if Jan will or won’t be included in the sophomore season. “That's what I love about this show, I think it's so clever… It really keeps you on your toes as a viewer. So, in terms of Bunny, I feel like the field is wide open.”

We will all have to wait to find out who killed Bunny when Only Murders in the Building returns next year on Hulu.