Now vs Then: Steven Spielberg and Tony Kushner Discuss the Changes Made to “West Side Story”

“This is one production I never wanted to see end,” legendary filmmaker Steven Spielberg said about his take on West Side Story, coming to theaters on December 10th from 20th Century Studios. “The last time I had a great time making a movie to this level was E.T. in 1981, and that movie certainly put in my head fatherhood and all sorts of things I never contemplated. Maybe this movie put in my head musicals and things I always have contemplated but until this time had never really had the courage to do.” 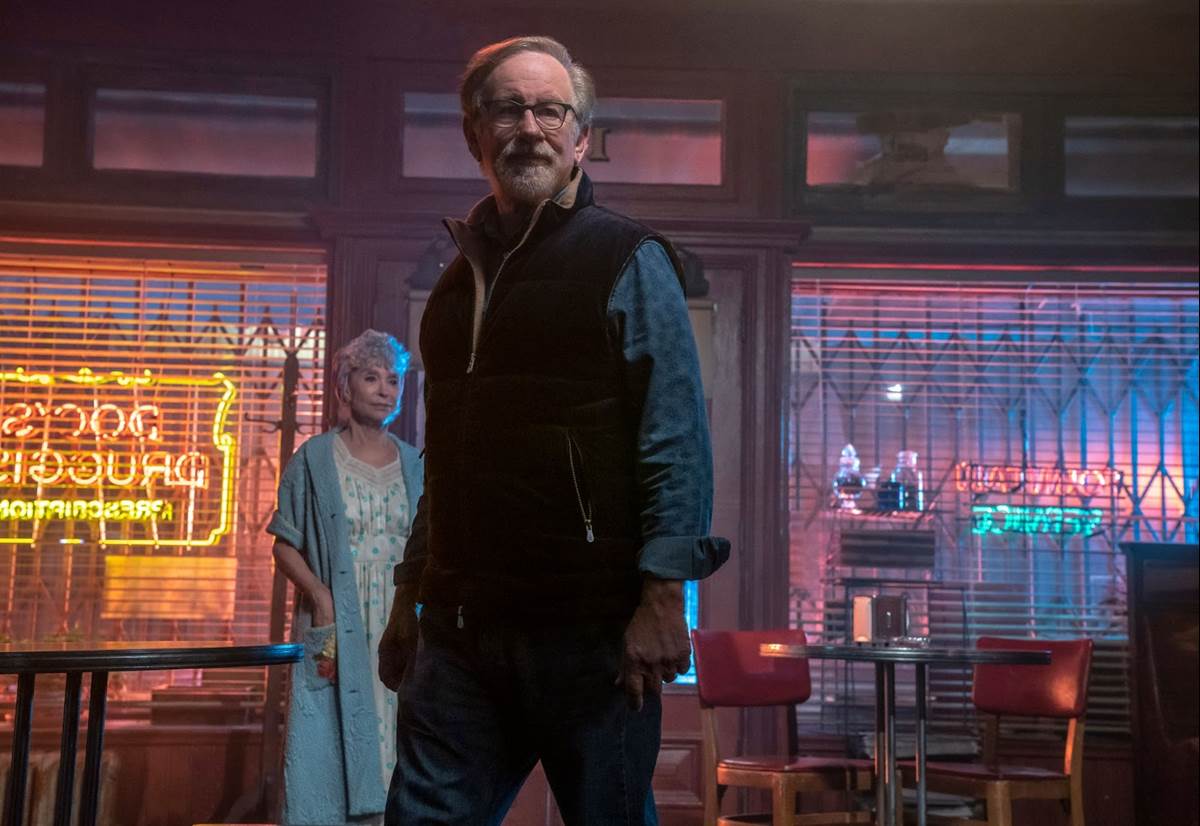 The Academy Award-winning director of Schindler’s List and Saving Private Ryan took himself out of his element on this project, which is dedicated to his father. Growing up in a musical household, he knew the music well from the Original Broadway Cast Album, and when the 1961 film adaptation was released, he saw it five times in his local movie theater in Arizona. “I love the original film made by Robert Wise with Jerome Robbins,” he explained. “Wise was a close friend of mine for many, many years, and I talked to him about the movie ad nauseam.”

Despite his reverence for the 1961 Oscar-winning classic, Spielberg doesn’t consider his version a remake but more of a reimagining. Screenwriter Tony Kushner, who won a Pulitzer Prize for his play Angels in America, thought the director had lost his mind when he first proposed the concept of reimagining West Side Story while working together on Lincoln. “Steven is an artist, first and foremost,” the screenwriter shared. “Everything he makes comes from a deep, personal place, there’s great heart in his work, along with the technical brilliance, there’s an enormous empathic imagination, curiosity about other people’s lives, and an abiding passion for democracy and justice. And he knows what artists know: that he needs to set himself new challenges with every film, he’s always eager to try something new, something difficult, something he’s never done before, something that scares him.”

The original musical was created by four Jewish gay men with a deep understanding of the immigrant’s journey and feelings of not being accepted for who they were. Director and choreographer Jerome Robbins, composer Leonard Bernstein, lyricist Stephen Sondheim, and playwright Arthur Laurents all touched on something important in 1957, but would the themes still resonate the same way to a modern audience? “I was moved by how many of our current struggles Steven felt could be explored in this sixty-year-old masterpiece,” Kushner continued. “The racism, xenophobia, the legacies of colonialism, the effects of poverty, the evils that catalyzed the creation of the musical, are still very much with us. Steven felt the time was right to take a new look at West Side Story, and he’s always been remarkably attuned to the zeitgeist. As we talked, we both came to believe that, proceeding from our shared love and respect for this musical, we could find new and exciting things to try, new ways of bringing this story and this score to the screen.”

Among the modifications to the story, all made with the blessing of the estates of the show’s original creators and Stephen Sondheim himself, is the destruction of the neighborhoods of Lincoln Square and San Juan Hill, where the story takes place. “The story is both big and political, yet at its heart, it’s as private and personal as can be; Two young people who fall fiercely in love, but the love that blossoms between them is murdered by the big political world surrounding them,” Kushner explained. “The story is a warning: racism and nativism and poverty are democracy’s antitheses, and if not resisted and rejected, they will atomize the bonds that hold us together as a society. Love, as they say, is the answer—love can transform the world, it can transform malevolent reality, but love doesn’t conquer all, or at least not all threats in the immediate moment. In a context of hatred, love is in danger. And that is tragic, that’s the tragedy of West Side Story.”

“Tony and I felt at the very outset of the project that Spanish should be intermingled with English,” Spielberg revealed at a fan event screening in Century City on December 6th. “Bernardo’s going to speak more Spanish because Bernardo is still not sure if he’s going to stay in America. Anita is pretty sure this is going to be her home and she’s trying to get Bernardo and Maria to speak less Spanish and so they are freely and subconsciously almost going from English to Spanish. Tony and I both made a decision never to subtitle the Spanish because that would be very disrespectful of the language, it would basically mean we were doubling down on English, and you would hear the English being spoken, and then you would read the English as the Spanish language was coming from all the Latinx cast. So it was very important to us, out of respect for the entire language, which really is almost a third of this entire planet, that this language needed to be enjoyed by those that speak the language, and understood emotionally for those who don’t know a single word of Spanish.”

This film sets some of the songs in different locations, such as moving “America” from a rooftop party at night into the streets during the day. It also reassigns some of them, including Rita Moreno singing “Somewhere” as Valentina, the widow of drugstore owner Doc who also acts as a mentor to Tony. “I asked Steven if we could give ‘Somewhere’ to Valentina,” Tony Kushner explained. “I loved the idea of hearing Rita Moreno sing it. I felt it’d make a powerful connection between the era the musical depicts and the present day, hearing this song of hope and yearning for a better world sung by a woman who’s been a witness to, and an important participant in, the tormented world we inhabit.” It was a thrill for Rita Moreno, who won her Oscar for playing Anita in 1961. “To me, it’s almost like a religious song, an extraordinary song, a song of belief and hope, and I am beside myself with happiness that I get to sing it,” the legendary EGOT winner shared.

Stephen Sondheim recently passed away at the age of 91, giving his final American TV interview to ABC News for a 20/20 special about this adaptation of West Side Story. “Steven loves the piece so much,” Sondheim revealed. “I think he must be passionate about most of the movies he does, but he’s certainly passionate about this one. It’s terrific. And for those who know the show, there are going to be some real surprises in it because Tony Kushner, who wrote the screenplay, has done some really imaginative and surprising things with the way the songs are used in the story.”

“The message of West Side Story is what is going to live forever,” Steven Spielberg said. “It is even more timely today than it was in 1957 when they mounted the production on Broadway. Even more timely than it was with the film in ’61-’62. What it’s about is what we are living in this country today—a time of tragic division and distrust and the waste of human life through violence, racism, and xenophobia. And even though the story is a tragedy, like all great tragedies, including Romeo & Juliet, West Side Story suggests that hope can be born amid devastation and despair, and thanks to Bernstein’s and Sondheim’s score, there’s a feeling that despite all the sorrow and ugliness, love transcends. So don’t ever give up! That’s why I wanted to tell this story right now. It is even more about now than it was about then.”

You can see West Side Story in theaters beginning December 10th, including on IMAX.