“Into every generation a slayer is born…” opened several early episodes of Buffy the Vampire Slayer and now as the show is approaching it’s 25th anniversary, Disney Hyperion is introducing new fans to its world with a novel, and yes, it’s cannon. In the fittingly titled In Every Generation, author Kendare Blake doesn’t focus on Buffy, but rather Frankie Rosenberg, Willow’s daughter and newly called slayer. 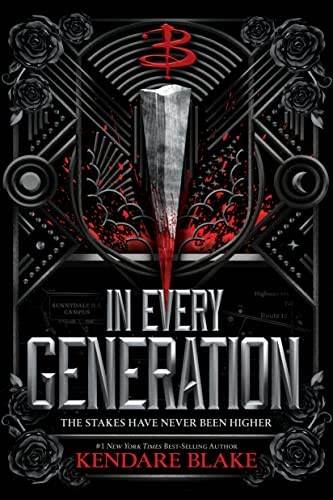 Let me get right to it, this book—and launch of a new series—was better than I expected and I want to express my appreciation for Kendare Blake’s ability to fully capture the essence and vibe of my beloved Buffy the Vampire Slayer and still manage to make it completely it’s own.

For those not familiar with the aforementioned Buffy, 20th Century Studios’ live action series told the story of a teenage girl who was chosen to be the sole vampire slayer of a generation. She was called when the previous slayer died, and while she survived a lot of close calls and even used magic to call forth more slayers, she’s definitely not immortal.

Blake’s story takes place roughly 16 years after the end of the TV series, and focuses on sophomore Frankie Rosenberg, the daughter of Buffy’s best friend and witch, Willow. Frankie shares some of her mom’s magical gifts, but that’s not the strangest thing. When someone attacks the slayer community, suddenly Frankie is called to take up the mantle, making her the first slayer chosen in almost two decades and, interestingly, the first ever Slayer-Witch. While all of this is well and good, Frankie’s backstory is odd at best with a supernatural element that feels more convenient than inspired. It’s my least favorite part of the story.

Blake wastes no time throwing readers right into the madness of the Buffyverse and if they’re not familiar with the show, the generous use of references to characters and events that came before will go over their heads. However, to her credit, Blake has crafted a story that honors the legacy of the series while making the lore approachable for, well, the next generation! She strives to appease longtime fans and new readers alike and masterfully pulls off the task.

As for the characters, the eco-conscious Frankie is an adorable, nerdy and immediately likable protagonist who reads very much like Willow’s daughter. As she struggles to come into her new powers, she’s surrounded by a great support system with her friends Hailey, werewolf Jake, and half-demon Sigmund. The newcomers are a fun take on Buffy’s “Scooby Gang” without being clones of the OGs. Speaking of the OG’s several familiar faces are here too including werewolf Oz, vampire Spike (swoon) and Xander who calls in from time to time.

Considering the job of the slayer, the book is not without violence and even a little bit of gore, as vampires are “dusted,” strange things happen at Sunnydale High School, and mysterious evil threats present themselves. But In Every Generation follows the Buffy formula for comedy and levity even in the midst of darkness and nothing here ever goes beyond PG-13. Honestly, those who watched any of the TV series will not be shocked by the scenarios and will find this a fitting homage to its predecessor.

If you couldn’t tell, I am so delighted to be back in this specific world of vampires, slayers and magic. As a fan of the original, I found this to be an almost cathartic read and a fun introduction to the mystical, strange and yet grounded  realm that is the Buffyverse. I’m excited to see what the future holds for Frankie and her Scooby Gang as they hone their skills and uncover supernatural mysteries that could only occur in good ol’ Sunnydale, California.

I give In Every Generation 4.5 out of 5 Watchers in tweed.