Ghosts became the number one new comedy of the fall 2021 TV season and CBS was quick to give the show a full-season order and the fun continues January 6th with a brand-new episode. “For the back order, we're going to have every ghost in every episode, which is wonderful,” executive producer Joe Wiseman revealed during a recent press conference about the show’s success and full-season pickup. Fans may have noticed that some of the ghosts are occasionally absent, due to budget constraints before the show found instant success. “Online I see people asking where their favorite ghost is, and it breaks my heart. But going forward, you get them all.” 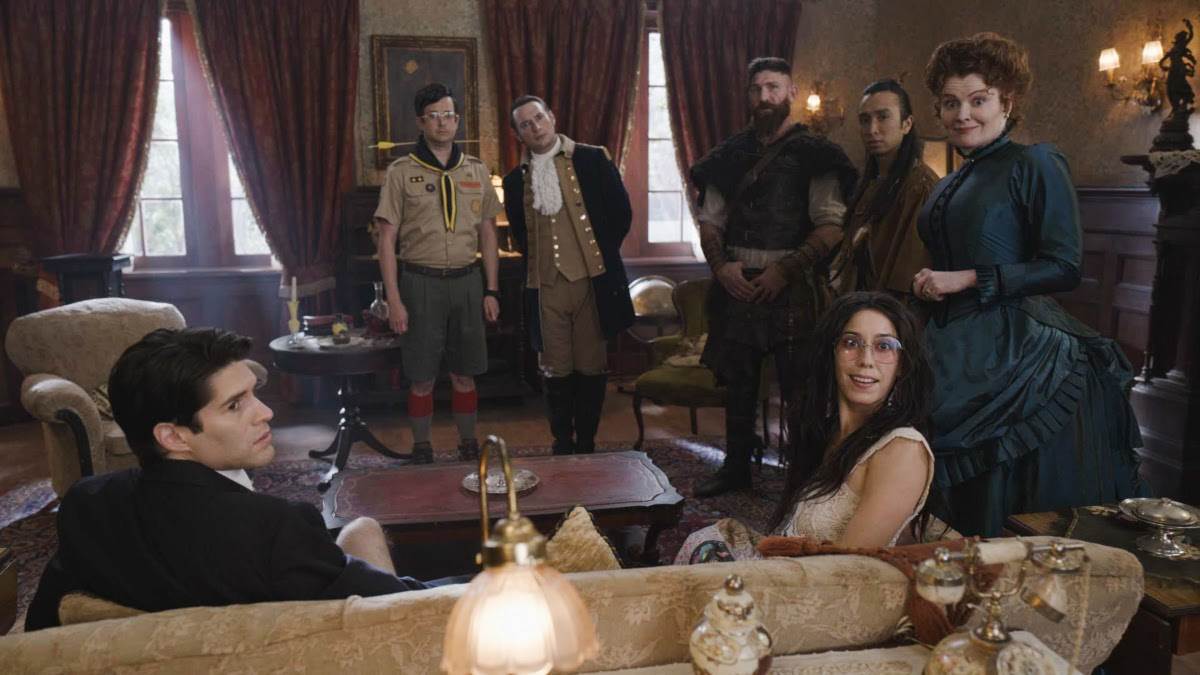 And things are certainly going forward. During this press conference, members of the cast were in full hair, makeup, and wardrobe, taking a break from filming one of the upcoming episodes. As a special treat, I got to sit in on a live table read for the first act of episode 15, titled “Thorapy.” Joe Wiseman introduced it with a little tease about the plot “As the name implies, ‘Thorapy,’ we find that our Viking character, Thor, has some long-standing issues and has decided that he needs therapy.”

“We've got some big comedy guest stars,” executive producer Joe Port teased about what fans can expect from the rest of season one. “Matt Walsh from Veep, Betsy Sodaro, Rob Huebel, Mark Linn-Baker is going to come back. And we're going to follow Sam and Jay on their journey as they eventually actually open the B&B by the end of the season. And we're going to learn more about the ghosts' backstories, including the one that everybody asks me about constantly, ‘What happened to Trevor's pants?’ So, there's a lot of fun in store, and we want everyone to stay tuned.”

While things may be changing for Sam and Jay, the rest of the ghosts stay the same, including their costumes. “My costume was very hot in the summer, and now that we're still filming in Montreal and it's like minus 6 here, it is the greatest thing I've ever worn in my entire life,” Brandon Scott Jones joked about his period garb as Isaac. “I've never been happier. I'm dressed head to toe full Muppet, like felt, no breathing, and I am warmer than I've ever been.” But not everyone could say the same. “I'm colder than I've ever been,” joked Richie Moriarty, who wears a scout troop leader uniform as Pete.

“I've seen the episodes a thousand times by the time they air, but I love watching them just to basically look at Twitter,” Joe Port revealed about the engaged fanbase Ghosts has. “I've not been involved in a lot of shows where there's so much real-time stuff happening when the show is airing and the fan response is great. And all of these guys in the cast are so good at engaging with the fans.”

Rose McIver is so good at fan engagement that CBS devoted an entire night to fan-selected reruns based on the response she got when she asked the community about their favorite episodes. “I feel like the audience is so wide for this show,” Rose elaborated. “And when you go online and you can find people all over the world, from all different backgrounds and life experiences, finding something in your show they connect with, it's like a complete honor. I love doing it with these guys. I think we all genuinely like each other, and I feel like that translates. And when we get to connect with an audience that seems to like each other and communicate with each other as well, it feels good.

It feels like a connection in a time where that's something we all need and want more than ever.”

New episodes of Ghosts air Thursdays at 9/8c on CBS. Episodes are available to stream live and on-demand on Paramount+. Video: Ring in 2022 with the First Performance of Magic Kingdom’s Fantasy in the Sky New Year’s Eve Fireworks
2021 Disney Person of the Year: Ken Potrock
Could a New “Giga Coaster” Be Coming to Knott’s Berry Farm?
TV Recap: “Queens” Sees the Girls Adjusting to a Member’s Absence in “Bars”
Ring in the New Year by Timing Up These 5 MCU Moments to the Stroke of Midnight