When it comes to their music, the girls are stronger than ever, but seeking justice for past relationships, mistreatments, and family drama threaten to put a pause on their exciting future. Lady Z aka Zadie (Remy Ma) is back for her first performance in years and the audience is loving it! As she performs it cuts to the girls talking about the show and Nasty Girl Records (NGR) on a local LA radio station. The DJ (Justin Credible) asks about their new venture and they tell him it’s about women supporting women and having a chance to create. He mentions that Lauren (Pepi Sonuga) dropped the ‘Lil’ and is now just Muffin. “It’s the same recipe,” she says “but a little more baked.” He asks about the dynamic of two rivals—Lady Z and Xplicit Lyrics—being on the same label, but Naomi (Brandy) and Zadie have moved past that.

Valeria (Nadine Velazquez) says they’re hosting the launch of NGR at the Staples Center in LA. The DJ asks about Queens, and Naomi is quick to say that Queens without Briana aka Professor Sex is not a thing. Now they’re putting their heart, soul, and money into NGR. He asks about Lady Z’s former producer Frank Black (Tobias Truvillion). He’s the past, NGR is now.

But Frank Black isn’t out of Zadie’s life completely. He’s at the show and when Zadie spots him, she freezes. She can’t rap and walks off stage. Knowing that Frank is the person who sexually assulted Zadie all those years ago, Naomi wonders how they can keep him away. Zadie says there’s nothing to do; Lauren chimes in that at this point the statute of limitations has passed. Zadie tells Naomi that she signed with NGR and wants this comeback, she doesn’t want to chase justice.

Eric (Taylor Sele) suggests that maybe Frank has changed and Lauren says when he found her and produced her mixtape wasn’t inappropriate, then she tags on, “I didn’t put myself in those positions.” The comment angers Zadie who tells her “don’t do that. You don’t know me, child.” Naomi says if they can’t go to the cops, they should go to the press and try to sway public opinion.

Valeria and her new husband Thomas (Gaius Charles) are at the studio trying to get to know each other and Val jokingly realizes that he could be a serial killer. He says the same thing about her. She asks who said “I love you” first, but neither of them have spoken the sacred words. Thomas suggests they do the 50 question soulmate quiz from his magazine. They reveal their embarrassing moments, perfect day, favorite foods (flan de queso for Val), movies, and finally a prized possession. For Val it’s something fairly new, a polaroid of her real mother, Rosalind Marquez, holding her as a baby. Unprompted, Thomas says he loves her. 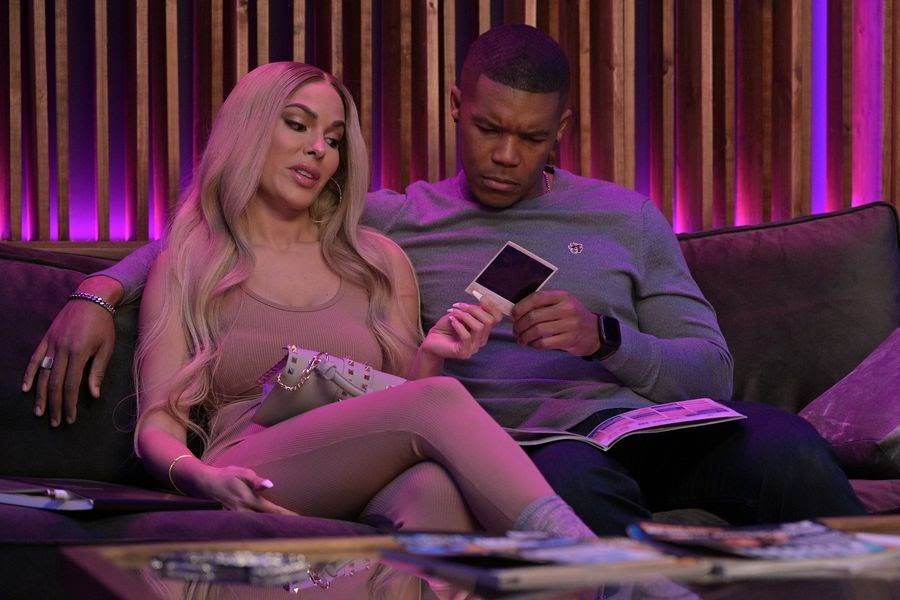 Jill (Naturi Naughton) attends a mass where the priest is talking about loving others and loving yourself. He says the ultimate form of love is mercy and we should extend the same grace inwards and forgive ourselves. “We’re made in his image and to forgive ourselves is to love God.” After the service, Jill goes to see him and compliments the powerful message. He responds by slapping her across the face. She’s surprised, but not that surprised. “Apologize to your father!” “Sorry, Daddy.”

Naomi and Eric are out to lunch when Frank Black shows up and comes by their table. Eric is friendly, compliments his talent. Frank congratulates Naomi on NGR, and she gives him all the side eye. Frank comments that Zadie has a temper, but asks Eric to pass on a message, “I’m rooting for you.” Oh, and he plans on coming to the launch. After he leaves, Naomi asks Eric why he’s pretending like Frank has done nothing wrong? She says they need to stop saving face and stand up for what’s right. 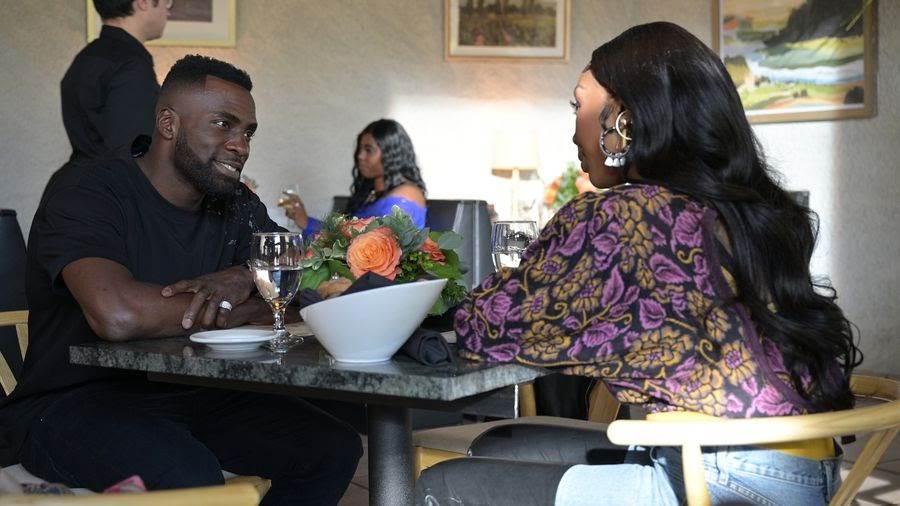 Jill’s dad is in town to officiate a wedding, but for now, he’s scolding her for her recent behavior and says it one thing to be gay, another to mistreat those around you. “How did you think your husband would respond learning the truth at an awards show?” Jill tries to move on and asks how he's been doing since her mom passed. He responds quickly that he’s ok, he’d rather talk about Jill’s faults.

Naomi goes digging for history on Frank Black and finds a red carpet video of him with his then new protege, Hood Honey. Naomi asks Eric for her contact info.

In an attempt to be sweet to his new bride, and to prove he was paying attention to her quiz answers, Thomas comes back to the studio with flan de queso hidden inside a Louis Vuttion shopping bag. But Val isn’t impressed and nearly picks a fight, catching him off guard.

Hood Honey aka Leah shows up at Naomi’s with her preschool age son in tow. She shares her story about Frank and how he discovered her at 16. He was her mentor, father figure, friend and she depended on him. Everything happened slowly and she wasn’t sure it was real, but she never said no. She found out she was pregnant and then a couple weeks later her album flopped. He gave her $2,000 to “take care of whoevers it was.” Naomi asked if she ever thought about coming forward. She shakes her head, “it’s over.”

The girls head to the studio and Lauren asks why people can’t leave the past alone. Val says she thought Gen Zers were supposed to be woke, but Lauren has not been supportive of Zadie. She also complains about Thomas and the flan de queso. Both Jill and Lauren think she needs to give her marriage a chance.

Naomi tells Zadie about Hood Honey’s story, but Zadie is not sure going public is the right move. There’s no guarantee that others will come forward. Naomi agrees, but if no one speaks up, then Frank can keep assaulting his proteges. She tells Zadie there’s a reporter who wants to talk to her, and she’ll have her back.

Finally, convinced to speak out, Zadie talks to the reporter and tells her story. She had taken a nap at the studio and woke up to Frank unbuttoning her shirt. “Why would you fall asleep here if you didn’t think this would happen?” She blacked out a few times, and eventually fought him off and broke his jaw before she got away. “I was raped and arrested on the same night.” Her lawyer said he could get the charges dropped if the story stayed with her. Then Frank hired her lawyer and no one would work with her. She wants Frank held accountable.

The next day, Zadie’s story is published, but the reporter draws a convenient parallel wondering if Lady Z is using a false allegation to make a comeback. This is not what anyone had intended and Zadie is mad at Naomi for pushing her, “it’s easy to lead the charge when it costs you nothing.” Zadie is done with NGR. Naomi is devastated, “I ruined a woman's life and might have tanked NGR.” This is affecting Lauren too and she looks like she’s keeping something secret.

Jill goes to the hotel to meet her dad, when she arrives he’s on the floor, very drunk. “I’m so glad you’re home,” he says gently as she helps him to the bed.

Val runs into Eric at the studio. She tells him that Thomas said he loved her and her response was to run away. She’s only ever told two people she loved them, Eric and Valentina who pretended to be her mom. “The only love I know is wrong.” She tries to kiss Eric, but he’s mature and tells her not to turn her back on something that’s right and real.

Jill’s hungover dad says he says he gave God all the glory, all he had and God spat in his face. Jill says she’s sorry that who she is disappoints him, but he surprises her by saying he’s watched her perform. “You looked happy. Was I the reason you were unhappy?” Then he says he’s proud of her. “I love you.” “I love you too, Daddy.” She sings and he falls asleep.

Lauren goes to Zadie and admits that Frank assaulted her too, and she has proof: a voicemail from the night after. In the message he suggests he might have had too much to drink, but maybe she was sending the wrong messages. She tells Zadie that she felt she owed him and still does, even as messed up as that is. She said after that night she never called him back, determined to start over. That’s when she found Eric. “Don’t give up and I’ll speak up. Let’s make sure he never makes another woman feel like this.”

Thomas and Val finally have their heart to heart. The quiz gave him 50 reasons to fall in love with Val, but she has 150 more for why he shouldn’t. He asks why she keeps trying to convince people that she’s not worth loving. “Isn’t it exhausting?” He tells her he knows getting married after 12 hours was stupid and it makes no sense, but he’s been in love before and knows what it feels like. That’s what he feels with Val. She says she loves him.

Jill’s dad wakes up and he’s back to his angry self. He’s so mean to her and she’s about to leave, but changes her mind. She repeats part of his message from Mass about self love and forgiveness. Maybe he doesn’t actually love God, but she does and she loves herself. She’s done with her father’s cruelty and tells him she’ll call the cops if he lays a hand on her again. Zadie finds Naomi and says she wants back in, then asks for help writing something for their launch. The girls gather backstage and Naomi tells Zadie they and NGR will support her. Eric says Frank has arrived. Lady Z takes the stage to share the truth in song and the girls join in. As the song plays out, a news report shows Frank getting arrested for multiple counts of alleged assault, and that four more accusers came forward after the performance. If convicted Frank could face up to 40 years in prison.