TV Recap: “Queens” Reveals Threats Facing the Group in “Who Shot Ya”

After the successful launch of their music video and new single, the ladies are ready for a world tour! With 12 hours to go until their first promotional billboard goes up, everything should be smooth sailing, but Eric owes someone money, Naomi considers going on a date, Jill is confronted by a past love, Valeria learns more about her mom, and Bree thinks about Jeff. 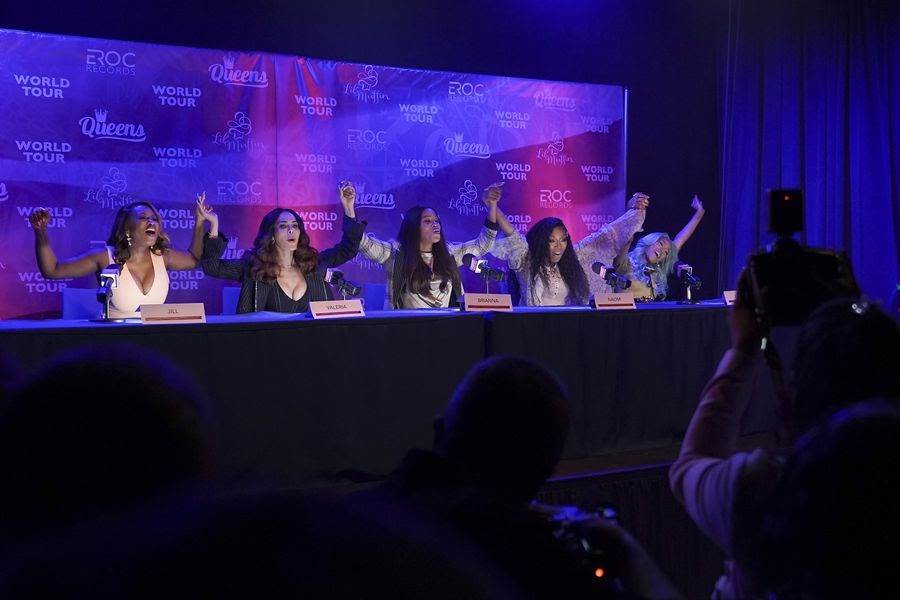 Please note this recap contains spoilers for season 1, episode 7 “Who Shot Ya”

The events of the last six months have finally caught up to the big moment we were left with at the end of the first episode. The first billboard promoting the world tour for Queens and Lil Muffin is up outside of the Staples Center and the group has gathered to check it out. Bree tells the women that she’s decided to forgive Jeff for cheating. As they’re talking a figure dressed in black grabs a gun and approaches them. Eric (Taylor Sele) tells the person he’ll get them the money, but the gunman shoots Eric in the shoulder.

It’s 12 hours earlier and the girls are doing a photo shoot for their new single—“All Rise (Supreme Court)”—and the upcoming tour. Eric is on the phone securing billboard displays and venues wanting the girls to play The Garden when they come to New York. He’s interrupted by an incoming call from someone listed as “DO NOT ANSWER.” He declines the call.

Jill (Naturi Naughton) and Lauren (Pepi Sonuga) catch up discussing their current situations, Lauren’s broke, but she doesn’t owe the label thanks to Eric; Jill isn’t with Tina anymore. Meanwhile Naomi (Brandy) and Bree (Eve) ask Valeria (Nadine Velazquez) why she hasn’t confronted her mom about taking pictures of her credit cards. Val says she doesn’t want to be the cynical version of herself that assumes the worst. Her mom has done nothing with those accounts and she hasn’t stolen any of Val’s jewelry or designer accessories. She’s hopeful there’s a simple explanation.

A giddy Bree and Naomi can’t believe that they’re about to go on a world tour 20 years after they broke up all because the “Troll Doll” (“mad respect,” say Bree) Lil Muffin covered their song. Naomi agrees and says it feels like it had to happen this way. They have everything they want. As they talk she gets a text from Rodrigo (the music video producer) and Bree asks what’s going on. He wants to take her on a date, and Bree thinks she should go for it. They go check out wardrobe options from the photo shoot while Bree talks about her first date with Jeff. She also decides she’ll serve as a chaperone.

The girls and Eric leave for the day and someone is watching them walk down the street. The mystery person is sitting in a car with balck gloves on the dashboard. It’s 9 hours until the first billboard goes up.

Valeria confronts her mom (Elaine Del Valle) about taking photos of her credit cards and Rosie says it was a misunderstanding. Valeria’s purse fell over and the cards fell out. She picked it up and saw it was an Amex Black Card. She didn’t know those were real and wanted to take a picture because she was so proud of her daughter. Valeria believes her and admits it’s hard for her to trust people. Rosie says she knows she’ll have to earn Val’s trust. Turns out Val isn’t totally sure about Rosie. She gives Eric the credit card with Rosie’s fingerprints for a background check.

Wyclef Jean invites Jill to rap a verse for one of his songs and he’s impressed with her skills in the recording booth. He asks if she can sing too and offers to have her try a few things to add some depth to his music. She’s honored by the offer.

Lauren is crashing at Eric’s place helping herself to a snack when Jadakiss and two bodyguards—with guns—show up to collect the $750K Eric owes them. Well actually, he’s supposed to have $100K today, but he doesn’t have it yet, he will that night. Lauren overhears the conversation and asks him about it. He tells her not to worry, but she knows he’s in this situation because he helped her. It’s 5 Hours until the billboard goes up.

Queens has gathered for a press conference to announce their World Tour and the news of Naomi’s date with Rodrigo is a hot topic amongst the group. Jill is running late but she tells the girls she was recording one song with Wyclef and she wanted to do it. but she’s all in for the group and tour. The press is heavily interested in Jill, but she deflects the questions until a journalist finally asks what’s to stop them from imploding again? Bree sums it up nicely saying, they’ve been through a lot in the last six months but, “We still found our swag. We’re representing every woman who every day puts her feet on the ground and gets stuff done.”

Lauren asks Eric how he’s planning to get Jadakiss his money and when he doesn’t have an answer for her, she tells him she can do a private show for a rich billionaire fan Walter Westcott. One hour of work should get her $250K. She says part of what she learned in rehab was to take responsibility for her actions. He agrees, but says he’s coming with and she can’t say anything to the girls.

The results of the background check are in and it turns out Valeria’s mother is not Rosie, but Valentina Gorgoza. She’s been in trouble with the law several times and Val is frustrated that her mom is a criminal. But Eric says she’s not her mom. Valentina was in jail when Valeria was born. It’s a con. Valeria is upset and says people always think of her as cold and conniving and a b*tch. This is why. When she lets people in they make her look like a fool. She wants to kick Valentina out, but Eric tells her to act like she doesn’t know the truth.

After the press conference, Tina (Felisha Terrell) shows up to confront Jill in the parking garage. She calls her a “vapid little b*tch” and states that nothing is going to make Jill happy because she’s evil. Jill is taken aback, but Tina isn’t done. She warns Jill that her reckoning is coming soon, then spits on the car window. It’s 4 hours until the billboard is up.

Naomi and Bree head to a restaurant to meet Rodrigo for Naomi’s date. As they approach, Bree says she can’t go in and won’t elaborate. Naomi is confused but continues with the evening as planned. Rodrigo treats the night like a first date, but Naomi wants to speed things up and “get to where we want to go.” He gently tells her that seems too easy and he thinks she prefers a challenge. So does he. They continue their “normal” date.

Bree has made it back home where she’s drinking and thinking about Jeff. Naomi calls and shares how uncomfortable the date is because Rodrigo is trying to get to know her. She’s doesn’t like dating because it delays sex. But aside from that she likes Rodrigo and he’s into her too.

Valeria goes home to find “Rosie” watching TV and laughing. She says she made dinner and invites Val to sit down. Valeria can’t keep her mouth shut and tells Valentina to leave then asks if she knows her real mother. Valentina resigns herself to going and Val grabs her arm saying she’ll call the cops. Valentina pushes Valeria against the wall and choking her. She says no cops. She’ll stay away from Val if she doesn’t call the police. “Keep your word. I’ll keep mine.” Before she leaves she says Val’s mom is Rosalind Marquez. It’s 2 hours until their billboard is revealed. 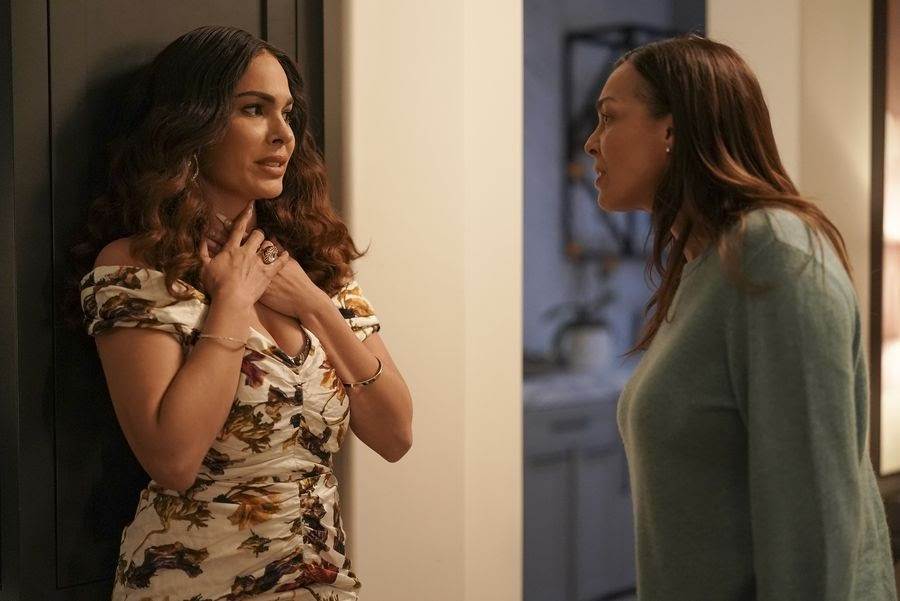 Eric and Lauren are at Walter Westcott’s launch party for one of his new apps. She’s agreed to do a private show for him, and that includes his demand that she get high, specifically offering her blow. She hesitates, but he pushes back saying he “paid for the Muffin experience.” Eric comes over to stop Walter and the duo leave without the money, but at least they didn’t compromise Lauren’s sobriety.

Naomi and Rodrigo finish their dinner and they kiss. He’s not ready for the night to end and offers to take her to a speakeasy nearby. She’s in. But before they can leave, Bree sends a series of texts revealing that was the restaurant where she and Jeff had their first date. She misses him. She’s drunk. Naomi tells Rodrigo she doesn’t want to say goodnight, but she has to support her friend. He kindly lets her go.

Jill is back in the studio with Wyclef and he’s listening to their session. He loves it and tells her wants to produce her solo album when she's done touring with Queens. But she and the girls are supposed to record their next album when they get back. He understands, but thinks she’s selling herself short, “groups don’t always last forever.” Jill declines saying she needs to be true to her girls.

Before we go on, if you’re keeping track, it seems there are three potential shooters that are about to upset Queens’ future: Tina, Valentina, or Jadakiss. Ok back to the story.

Valentina is sitting in her car watching as Valeria comes out of the local police station. There’s a gun on her passenger seat. It’s 30 minutes until the billboard is up.

The girls head over to Bree’s house and Jill takes the opportunity to apologize for her recent behavior. They all admit they pass sound the honor of being the messed up member of the family. Bree finds the note Jeff left from before his surgery, but instead of anything useful it’s a link and password to a video. In the video he praises Bree for who she is; reminisces about their honeymoon; and apologizes for what he put her through. He tells her to “do what makes you happy.” He says he loves their kids and he loves her. Everyone gets weepy. Eric texts that their billboard is up.

Minutes earlier…Eric is waiting for the girls when Jadakiss and the boys show up. They know he doesn’t have the money, so he has a new proposition: he wants 10% of total profits from Queens’ tour. Eric says it’s not his money to give. Jadakiss suggests he figure something out without them knowing. Eric refuses and their dispute turns physical. After taking some punches, Eric gets to his car, and Jada fires a gun as he pulls away…and transitions to Eric getting shot in the shoulder in front of the girls. He tackles the gunman who fires another shot, though this one is not aimed. The gun falls to the ground and the shooter takes off on foot. “I let them get away,” Eric says as he turns around. Something is wrong.

Several flashbacks play, highlighting some important moments for the girls up to this point. Throughout the montage, Jill can be heard reciting the prayer before their BET Awards performance. The flashback fades to present day and Bree has been shot on her left side near her heart.