TV Recap: “Queens” Delivers New Music and New Problems in “Behind the Throne”

New music for Queens means a new music video—their first in 20 years!—and Behind the Hits wants to film a documentary about the process. The group agrees, but it’s far from smooth sailing. Someone’s seemingly innocent comment nearly gets them cancelled, a sick nanny means kids running around on set, and Lauren embracing herself doesn’t mesh well with her label. Please note this recap contains spoilers for season 1, episode 6 “Behind the Throne”

Queens just killed it, closing out the AMA’s with the four women working as a united group. Eric (Taylor Sele) meets them backstage saying his phone is blowing up, everyone wants them including SNL. As they celebrate, a teaser for a Behind the Hits documentary about filming their new music video starts to play, hinting at what’s about to unfold.

A few weeks prior to the AMA’s Brianna (Eve) is listening to Favio Foreign on the Breakfast Club podcast where he reveals that he hooked up with Professor Sex. Her two oldest kids overhear, prompting her son James to ask if she did stuff with him.

In Valeria’s (Nadine Velazquez) corner of the world, she’s trying to connect with her estranged mom by cooking for her. It’s not good, but Val has something else to offer: a diamond necklace. Her mother hesitates to accept it, but Val insists and says she likes that they’re getting to know each other.

As for Jill (Naturi Naughton) and Darren, they sit down with lawyers and officially get divorced. Darren apologizes for drawing things out and before he leaves tells Jill, “you’re a good person. Don’t change too much.”

At the studio, the group (minus Valeria) gathers and they’re excited to release their new song and film a music video. Eric has more good news, Behind the Hits wants to document the making of their new music video, which means cameras on them 24/7 for the next few weeks. This seems like a lot for Brianna, but this is their second chance at making it big. Valeria arrives gushing about how great things are going with her mom. They tell her to be careful, because when long lost family members show up, it usually means they want something. “Protect yourself,” Naomi (Brandy) says.

Eric gets everyone’s attention and has them listen to the verse that Lil Muffin (Pepi Sonuga) submitted for their new song. It’s okay. Then Eric shares that super star Lady London also wrote a verse, and this one is much better. The group votes, with Brianna and Naomi staying loyal to Lil Muffin aka Lauren who helped put them back in the spotlight. Jill, Val and Eric look at the big picture—a world tour—and vote for Lady London. Now they have to tell Muffin.

As they exit a posh restaurant in LA, Jill and Alicia (Rana Roy) are surrounded by paparazzi with their cameras trained on the singer. Jill makes a lighthearted comment about how she’d have come out years ago if she knew she’d receive all this attention!

Meanwhile, Lauren feels betrayed and tries to regroup with her team/friends who don’t seem to care how it’s affecting her as much as it’s affecting them. How is Muffin going to be relevant? “You need to be transformational,” one of her pals declares. She calls Eric and asks for a meeting with the label. 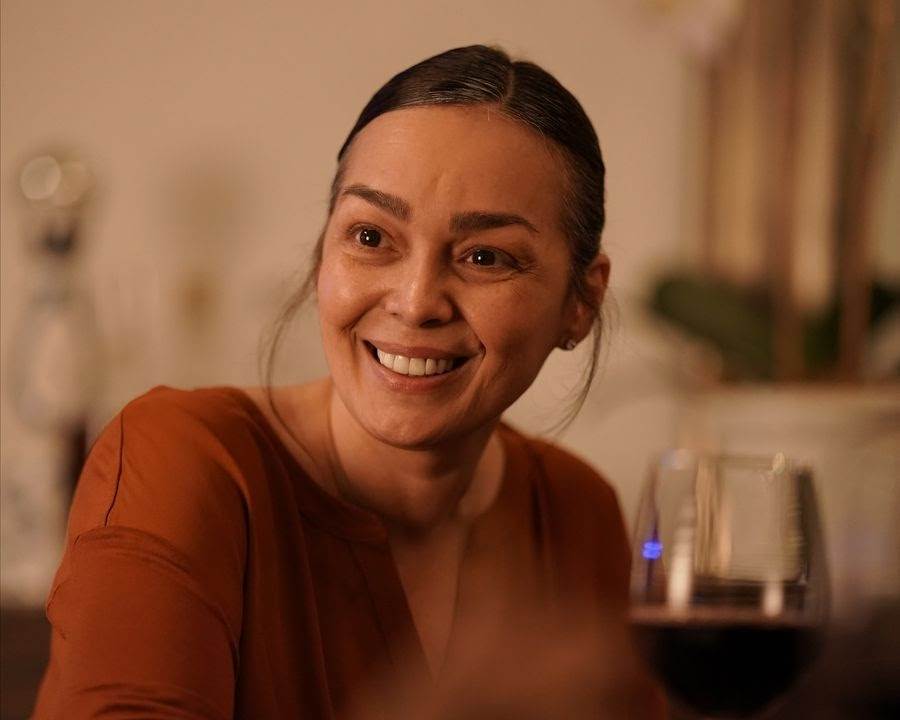 In an attempt to avoid a conversation about money, an unprompted Valeria gives her mom a check for $100 thousand. Instead of accepting it, her mom tells the story of coming to America from Puerto Rico and falling in love with New York City. She started dating and before she knew it she was 19 and pregnant, then 19 and married and her husband turned out to be abusive. Scared for Valeria’s life, she took the baby to a shelter and went back to Puerto Rico. She knew her daughter had become a celebrity and was successful, making her sacrifice worth it. She tears up the check and they hug for the first time.

It’s the first day of the music video and documentary and Naomi is nervous, Val brings her mom, and Jill arrives before Bree who has to bring the kids because the nanny is sick. Eric introduces them to Rodrigo Canales, the music video director who is a big fan of Naomi’s and even mentions seeing her perform in a small town with just a handful of fans. As the girls get ready to shoot, they learn that the gossip sites are accusing Jill of coming out as a way to boost her image. “Am I cancelled?!”

Jill interviews for the behind the scenes documentary and says she’s not using sexuality for her career, she’s having the time of her life because she’s finally free. As she scrolls through her phone and responds to Twitter haters, Val tells her to ignore the mob. But don’t worry folks, it’s going to get worse.

Bree finally gets through hair and makeup…right as her trailer gets hit by a golf cart her kids are driving. She marches out upset and asks James to watch his siblings. He asks about getting to his soccer game (semi finals) but Bree can’t do both. Frustrated and hurt he tells her to stop being a slut, but before mom mode kicks in, she’s called to set.

Lil Muffin and Eric go to the label and she tells them Muffin is no more. It was a character she made for herself to deal with being bullied. She’s actually nerdy, loves Naruto, and wants to represent who she is now: Lauren. She tells them “you said you trusted my vision. Trust me one more time.” But the execs don’t like the idea and the label opts to void her contract. They also want to settle her debt. She owes them $750 thousand and she can’t sell the house, because it belongs to the label. Eric says they’ll figure it out.

In Val’s interview, she declares that her mom showing up is the best thing that’s happened to her and she’s focusing on the time they have, not the time they lost.

While waiting to be called back to set, Naomi gives Rodrigo a guitar lesson, and he’s definitely enjoying being in her presence. Want to guess who’s not enjoying it? Eric! 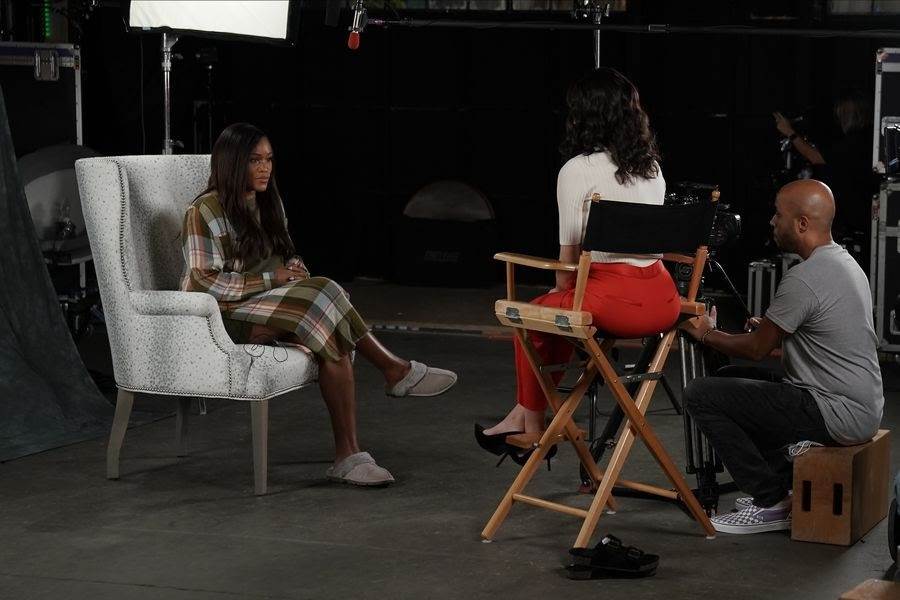 Bree's interview reveals that she left school to be a mother and doesn't regret it. Her kids are her entire life. She’s glad for the comeback and happy to be around her girls, but it’s hard too. She stops part way through and gets up seeing her kids taking tons of snacks from craft services. She goes to find James who says he doesn’t like the change in her. She tells him when Jeff was alive and providing for them, she could be mom, but now she has to work. It’s not fair, but she needs his help with the kids.

Hoping to avoid being cancelled, Alicia says they need someone to vouch for Jill. As they make plans, a new video starts circulating and Alicia asks if Jill assaulted someone. Lacey, the crew member from Cribs (back in 2001) who Jill yelled at and then pushed, is sharing her story. As the news spreads, Lady London drops out of the project and Val says what everyone is thinking: Queens is done. Naomi interviews and says what’s happening now is bad, but not over. “Jill’s gonna fix this.”

Jill and Tina (Felisha Terrell) go on a morning show together and Tina generously supports her ex girlfriend. Jill says Tina saved her, and then she makes a public apology to Lacey. The host asks if Tina and Jill are back together and Jill indicates they’re stronger than ever.

Queens are saved and suddenly Lady London wants back in, but this time the girls are going with Lil Muffin. Everything is back as it should be! Their music video “All Rise (The Supreme Court)” is finally done and features the women singing about such topics as Black Lives Matter (even mentioning Breonna Taylor and George Floyd), women’s and LGBTQ rights and more. It’s two weeks later, and everyone is at a party to celebrate the launch of the music video, but it’s not all sunshine and roses. Eric tells Lauren he repaid the label for her but when they embrace, he looks worried. Tina and Jill are having a great time until Tina offers to come out to LA for a few weeks to be with Jill. Sadly, that’s not what Jill wants. Tina is hurt and confused since they told a very different story on live TV. “You used me.” Jill appreciates Tina's support but argues that her ex made that choice to defend her. “God gives us free will,” Jill says and a disgusted Tina walks away.

Elsewhere, Val and her mom both say “I love you” and just as things are falling into place for Val, the documentary producer approaches with some bad news. She shows Valeria footage of her mom taking pictures of Val’s credit cards.

Now that Rodrigo and Naomi aren’t working together in a professional capacity, he’s hoping they can spend time together. They’ll be time for that later, but tonight, everyone gets up to dance including Brianna with her kids in tow.  As they all dance, Eric gets a call: Queens and Lil Muffin booked a world tour!