“I am from Manhattan, Kansas,” Bridget Everett explained about her upbringing at a TCA press conference for her new comedy series Somebody Somewhere. Inspired by her own life, the HBO series debuts on Sunday, January 16th, on HBO at 10:30/9:30 c and streaming on HBO Max. “They actually call it the Little Apple.” Bridget may call the other Manhattan home now, aka the Big Apple, but the new series takes her back to her Kansas roots. 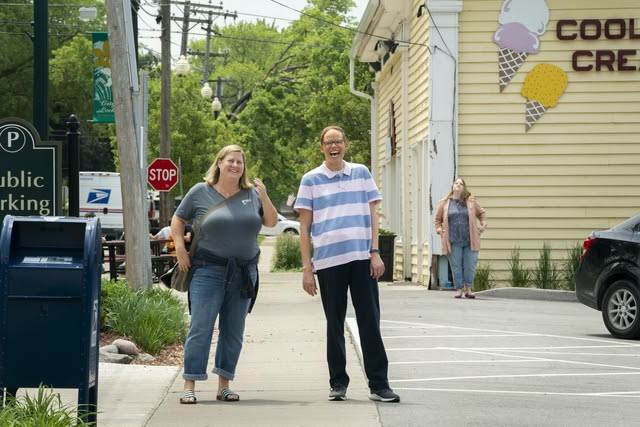 “I love being from Kansas, but I didn't ever think that there was a world sort of outside of it,” Bridget shared, who loved performing in her school choir and musicals, but didn’t think she could make a career out of it. “I did go to school for opera and vocal performance and everything, but even when I went to college in Arizona, I just never thought big enough to think about New York.” She fantasized about being like Debbie Harry at Studio 54 as a child, but it wasn’t until she found karaoke that she found her calling. “I came to New York and I discovered the cabaret world and the performance art world. And people were basically just going wild. And I was like, well, maybe I can do that.” Despite her talent, Bridget Everett really needed to be pushed to overcome her self-doubt and make her dream come true. “I just had people pushing me into it and I fell into the thing that was really my dream, but I needed some help finding my way there.”

In Somebody Somewhere, Bridget Everett plays Sam, a Kansan struggling to fit into her hometown who goes on a journey of self-discovery to find herself, her people, and her voice. “I think this story is a universal story, I hope it speaks to people everywhere,” co-creator and executive producer Hannah Bos shared about the show’s setting. “We're focusing on Kansas because Bridget Everett is from there. We're Midwesterners ourselves, but it is for just people who aren’t on the big coasts or near big cities. It’s that you can find your people wherever you are.”

Standing in for Manhattan, Kansas on the series is Chicago, Illinois, and its surrounding suburbs. “I grew up in rural Minnesota, I ended up in Chicago,” Paul Thureen shared, who co-created the series with Hannah Bos and also serves as EP. “I think there's something fun about doing the specifics of Kansas and what makes Kansas, Kansas.” The tagline for the series is “A coming of middle-age story” and Paul echoed the hope that all viewers find it relatable. “Anybody can identify in looking at self-worth and following your dreams at any point in your life. And I think that that’s a universal thing told, hopefully, with sort of a grounded, accurate look of the Midwest with the specificity of this place in Kansas to make it fun and special.”

“I never dreamt I would end up on HBO, so it’s just sort of a reminder you have to keep dreaming and dreaming outside of where you are,” Bridget Everett added about her journey. “It was really about finding the belief in myself that I could be a singer. And when you're growing up in Kansas, or at least in my experience, you just sort of are like, well, I'll do the show choir, I'll do the musicals, and then that's it and it’s over. And then it’s really sad when you graduate high school because you're like, well, that's the thing I love most in the world. I don't get to do it anymore.”

Thankfully for Bridget, she gets to continue doing what she loves and you can see her in Somebody Somewhere starting Sunday, January 16th streaming on HBO Max and premiering on HBO at 10:30/9:30c.