Valentine’s Day is here, and what better way to celebrate the day than with a romantic comedy from the vault of Touchstone Pictures with 1987’s Can’t Buy Me Love. 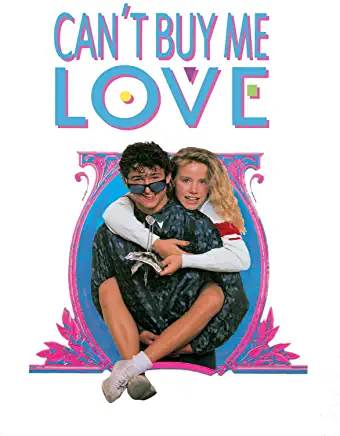 Ronald Miller is a nerdy kid who spends most of his time cutting lawns during the summer and blending into the background at his high school. During his senior year Ronald wants to make the most of high school days. While shopping at the mall for a new telescope, Ronald happens upon the most popular girl in school, Cindy Mancini, who is desperate for help.

Cindy has ruined her mother’s suede outfit and can’t afford to pay for a new one. Ronald, however, has the money and the two strike a bargain. Ronald buys the outfit, in exchange, Cindy pretends to be his girlfriend for a month.

Initially, the plan works, but soon disaster strikes. Their deal doesn’t stay secret, and the popularity Ronald has, is lost. During their ‘relationship’ Cindy started to have feelings for Ronald but Ronald was overcome with all the fame and popularity he gained, thus destroying a real chance with Cindy.

A speech before the student body about how status doesn’t matter and that everyone is the same, gains Ronald some true popularity in the school, and has changed Cindy’s mind. By the end of the film, Ronald and Cindy ride off into the sunset with a plan to start their relationship for real.

Patrick Dempsey is a great leading man, and he portrays the angsty teenager well.

Amanda Peterson is the real star of the movie. She is forced to play the role of popular cheerleader, but Peterson shines and makes Cindy Mancini a likable character that the audience can root for. Dempsey might be the name attached to this film, Peterson is the star because she makes a stereotypical role personal and above the mediocre standard that this character was usually given in the genre during the 1980’s.

The premise of the movie is that Ronald buys Cindy and it’s revolting. Ronald is supposed to be a nice guy, but when opportunity knocks, he forces Cindy into this arrangement with the promise of money.

This type of premise is out of place now and should have been in 1987. When money exchanges hands between the male and female character for services, in my opinion the movie loses all credibility. (This is one of the reasons why I dislike Pretty Woman so much).

Ronald is a nice guy, but he is taking advantage of Cindy and uses his money to hold power over Cindy. She is vulnerable, and though Ronald is less than popular, he exploits Cindy for his own personal gain. No matter how nice Ronald appears, the fact that he is willing to stoop to such a level, makes him a creep.

There is a scene where Cindy’s mom’s boyfriend is gawking at Cindy and making rude comments at her while she is in her bathing suit. Amanda Peterson was 15 at the time of filming, and this lecherous old man making these crude and disgusting comments is something I wouldn’t expect in a teen comedy. I don’t care what decade it was made in. This scene was unnecessary and should have been axed from the script.

The movie is filled with all the stereotypes that a teen comedy is known for. From the nerd to cool guy arc, the slow clap after an impassioned speech in front of the school, and the two main characters riding off into the sunset. While these cliches are expected in this genre, they're obvious and they don’t add anything to Can’t Buy Me Love.

I can’t give Can’t Buy Me Love a ‘Streamy Award’ because I do not recommend it. The premise alone is bad, the treatment of Amanda Peterson’s Cindy is awful, and the film is best left in the vault. Peterson is excellent in her role. Tragically, making this movie would impact Peterson’s life forever.

Family members of Peterson claimed that a traumatic event Peterson experienced during the filming of the movie contributed to numerous future events, including Peterson’s drug addiction, which cost her a promising acting career. At the age of 43 in 2015, Peterson died from an accidental morphine overdose.

There are better films in this genre, and I suggest you look elsewhere for your entertainment. Perhaps 10 Things I Hate About You?

Next week, we hit the streets of San Francisco with Eddie Murphy and Michael Rapaport in Metro.