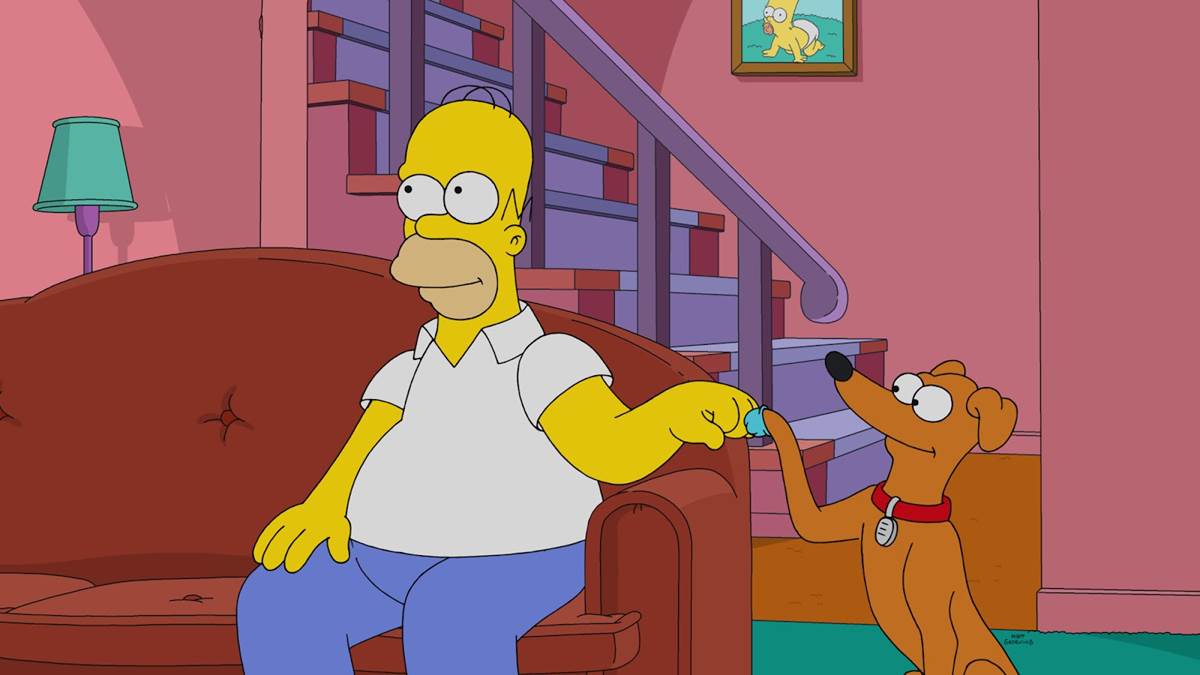 Hello and welcome to Laughing Place’s regular recap of new episodes of The Simpsons on the FOX Network. This week’s installment, entitled “You Won’t Believe What This Episode Is About – Act Three Will Shock You!” is the 14th episode of the long-running animated sitcom’s 33rd season. 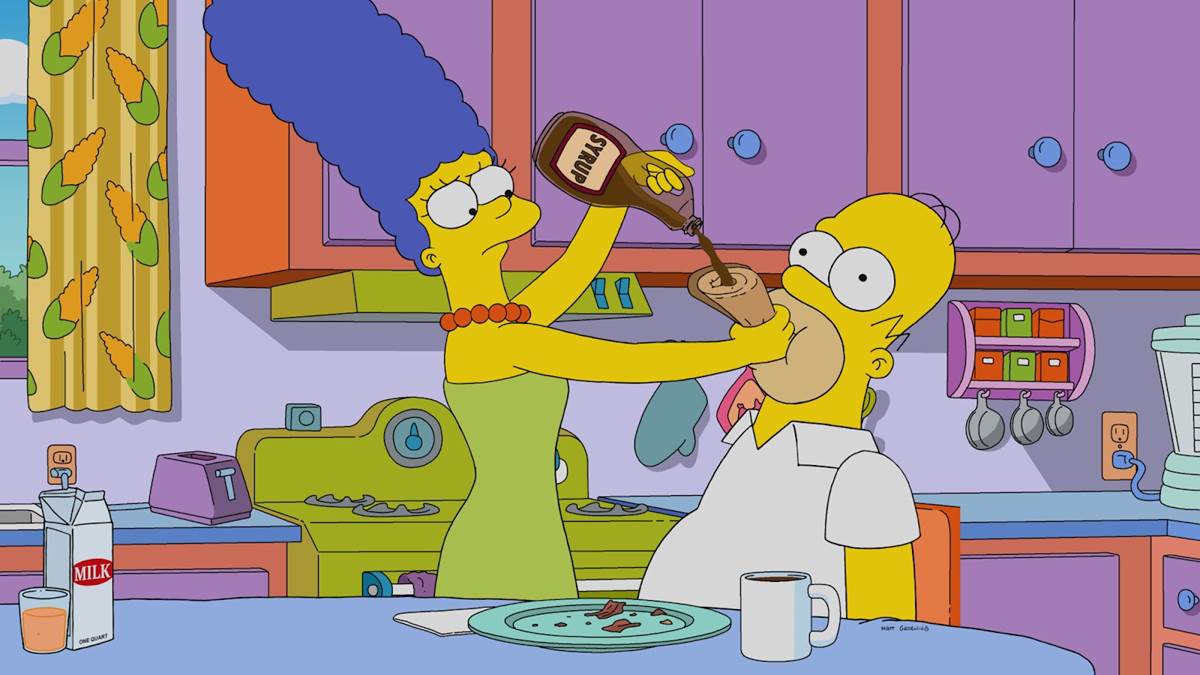 “You Won’t Believe What This Episode Is About…” begins in the Simpson home, where Our Favorite Family is eating breakfast. Marge wants the kids and Homer to eat faster, so she pours syrup down her husband’s gullet using a curled-up pancake. It turns out she’s rushing them because of a three-hour rental of a souped-up vacuum cleaner that Sarcastic Man delivers to the front door. Marge sends the other members of the family to the dog park and the “Boing-a-torium” trampoline park, where Homer, Bart and Lisa go their separate ways. At the dog park, Homer runs into Lenny, who introduces him to his new dog who he adopted when he realized “human companionship was a non-starter.” Lenny wants Homer to meet him at the park every day and start a “Dog Dad Boys” club, but Homer is not interested.

When Santa’s Little Helper scares Lenny’s dog, Lenny revokes his invitation, and Homer feels the need to reward his faithful pooch. He brings Santa’s Little Helper to an ice cream shop and briefly leaves him in the car with the windows rolled down, but the dog gets so excited that he accidentally rolls up all the windows and knocks the keys out of the ignition. Homer takes his time deciding on a flavor as a crowd outside gathers around his car and judges him harshly for his treatment of Santa’s Little Helper. When Homer emerges, he’s surprised to find the angry mob gunning for him: “Wait, it’s not what it looks like– I just left my dog in my car on purpose.” The crowd records him on their phone as he tries and fails to open the doors. When firefighters arrive to help, Homer backs into the door of the fire truck and locks the dalmatian in as well, only making the situation worse. 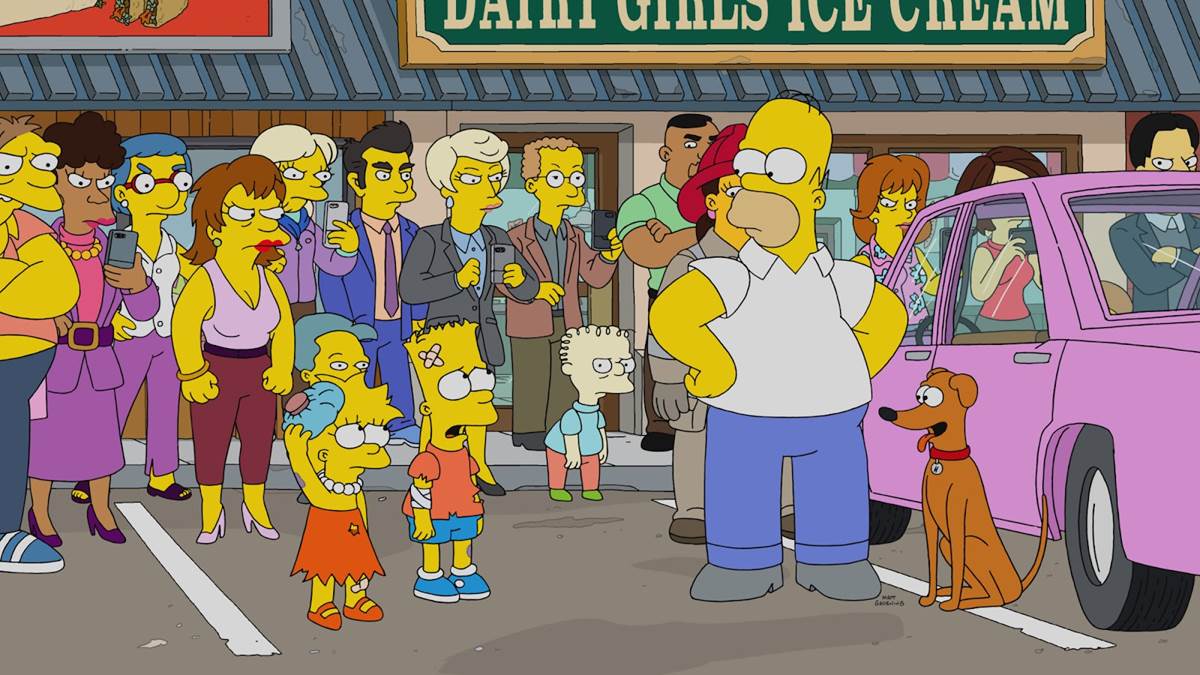 A firefighter releases Santa’s Little Helper, but the crowd gets even more irate when Bart and Lisa show up and declare that he forgot to pick them up. As Homer drives away with the kids and the dog, Lisa notices that everyone is recording them on their phones. At home, Marge is relaxing after making the house spotless with her vacuum rental, but when she goes to post some photos of the sparkling living room on social media, she comes across the video of Homer and lets out a scream. “So far the neighborhood rage is contained to just dog lovers,” says Lisa after they’ve returned home. “Oh no– it’s spread to the cat people.” Marge demands that Homer apologize, but Homer says the dog and he are cool. Lisa says Homer needs to accept responsibility so people will move on, so she drafted him a heartfelt apology. But Homer insists the controversy will blow over.

The next day at church, Reverend Lovejoy scolds Homer publicly, causing Homer to accept that everyone is mad at him. He begins to read Lisa’s apology aloud at the pulpit, but after picturing the congregation “tsk”-ing him, he goes on a rant about how they’re all “pee-pee babies” who are too easily offended. “Amazing job. You really got his voice down,” Bart says to Lisa. Homer continues his diatribe and then accidentally knocks the reverend through the stained-glass window behind them, crushing Lenny’s dog in the process. In a high-tech montage, more posts are made about Homer online, spreading all over the globe. It gets so bad that Mr. Burns is forced to record and release a video message declaring that his company has terminated Homer Simpson. “On the plus side, this has made people forget you almost killed the dog,” remarks Bart. Bart begins keeping a tally of the death threats, slurs, and acts of extreme violence targeted against Homer, but what Homer bemoans most is the loss of his anonymity. Lisa shows Homer TikToks of people lip-synching to his “apology,” and Homer decides he needs “the comfort of fast food and slow friends,” but Moe shuts him out of the tavern disapprovingly. In fact, the only place he’s welcome is a “right-wing podcast house,” but Homer runs away from there in a panic. Three weeks later, Homer watches a commercial for Dead Lobster’s annual Prawn-a-Thon and gets excited to take his family to the event, only to discover they went without him. Homer shows up at Dead Lobster and everyone in the restaurant storms out in a huff. Marge tells Homer not to take their betrayal personally, as she and the kids just want to be able to dine out in public without making a scene.

Suddenly a businessman named Theo (voiced by actor/comedian Kumail Nanjiani) appears with an offer for Homer to attend something called “the Institute,” where he might be able to rehabilitate his reputation. “Well, my reputation is everything to me,” says Homer. “That doesn’t jibe with your past behavior,” replies Lisa. “I’m tired of reputations being about past behavior!” Homer decides to go to the Institute, where he meets the other attendees: Helen Lovejoy (AKA “Lemonade Karen”), Councilman Jed Hawk (AKA “The Toilet Rocker”), Larry Doogan (AKA “Pissed-O Shorty”), and Kirk Van Houten (AKA “Juice Box Dad”), all of whom have made public disgraces of themselves that resulted in them going viral on the internet. These five characters immediately don’t get along, but Theo makes a covert call on his wrist watch to an ominous syndicate who say the group is “perfect for this mission.” Later, Theo gives a lecture to the group, informing them that they’ll be doing public acts of charity that will be posted online to help their image. Homer resists, but when threatened with team-building improv exercises instead, he shouts “Good deeds! Good deeds!” We see a montage of Homer and the rest cleaning up a lake, planting trees, removing graffiti, and picking up trash in a park. “I can feel my reputation being restored with each carefully staged good deed,” says Homer, but he and the others find themselves being pelted with garbage. “It’s the people the internet told us to hate,” says one of the mob tossing trash from an overpass. Theo says there’s one other way for them to get their lives back: by deleting the records of all their misdeeds with a “universal eradication code” that needs to be uploaded into the ChumNet server, which can only be achieved by breaking into the company’s headquarters.

The teams agrees to perform the heist, noting that they’re “exactly kind of like a suicide squad.” They use the training they acquired by performing all the good deeds to break into the headquarters and are surprised to find there are no people working at ChumNet– “just clickbait.” Their biggest obstacle is walking past a row of cubicles housing computers with clickbait headlines displayed on their monitors, and one by one they begin to succumb to the draw of these headlines. Homer almost clicks on one about himself, but manages to resist just before glass walls come down trapping his teammates inside with poisonous gas quickly filling each space. Theo orders Homer to find the server room, which he does, and he plugs a flash drive into the server. The global internet scrub begins to take effect, but Homer soon catches on that he and his team aren’t the only ones having their histories erased. “Those people did actual bad stuff,” Homer realizes, weighing whether it’s worth getting his own life back if it means he has to also help “history’s current monsters” escape their own fates. When he goes to wipe the sweat off his brow, he finds the apology Lisa wrote for him in his pocket, and reads it again. “I will strive to do the right thing!” he declares, and against Theo’s wishes he yanks the “doodad out of the computer hole.” He then hits the “worldwide broadcast” button and reads the apology– with genuine remorse this time. We see a montage of Lenny, the firefighters, and Reverend Lovejoy watching Homer’s apology with tears in their eyes, while a Morgan Freeman-like voice narrates the results. The syndicate blames Theol for the failure: “We’re going to do to you what we did to democracy– irreparable damage.”

In the coda, Homer continues to read Lisa’s apology, and we cut to Kent Brockman immediately forgetting the lesson by featuring a video of a “dumb idiot having a heart attack on a treadmill” on the news. At Dead Lobster, Homer shows he hasn’t quite learned his lesson either, but does feed Santa’s Little Helper from the table. 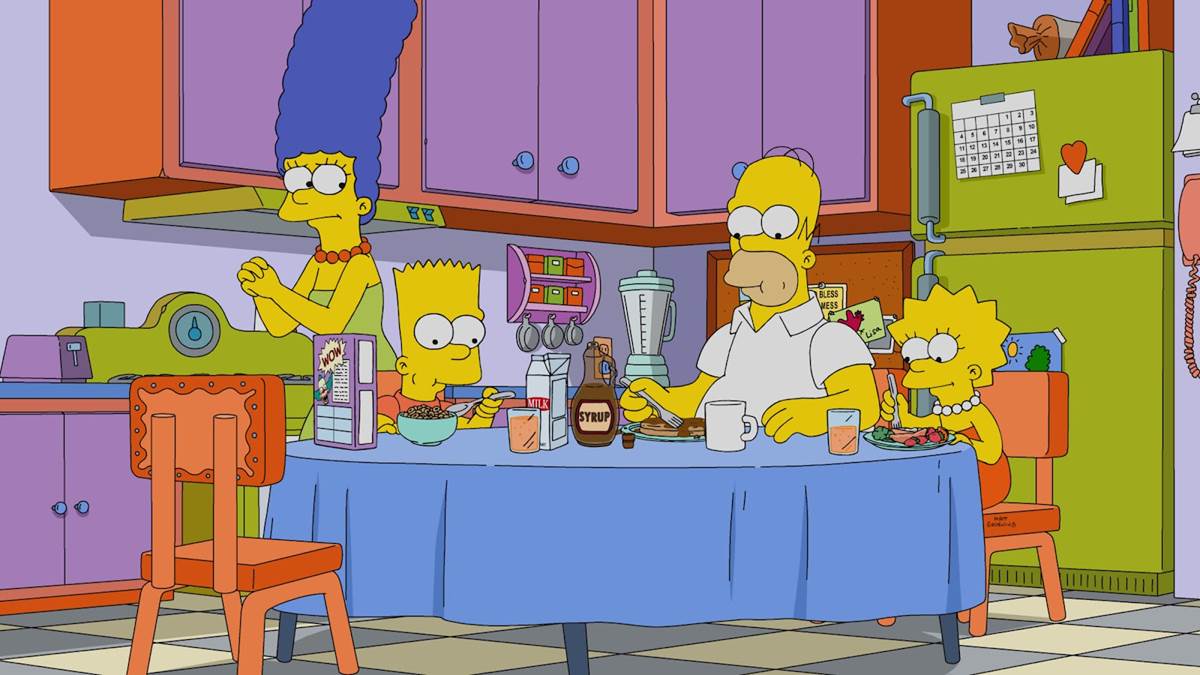 New episodes of The Simpsons air Sundays on FOX.