Sarah Jessica Parkers walks viewers through the intricacies of relationships, the difficulties of marriage, and the beauty of her hometown in Miami Rhapsody. 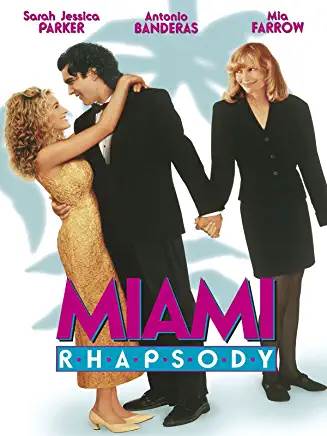 Everywhere Gwyn looks for guidance she is told she should get married, that it’s a great thing, but her examples in real life make her question the notion and practicality of marriage. Gwyn’s hesitancy to commit is too much for Matt, who finally ends the relationship.

Upset over the breakup, Gwyn starts to self-examine her own thoughts toward commitment, and slowly she sees how her family reconciles their differences and piece their own marriages back together. Gwyn and Matt say their goodbyes as he departs for a job in Africa, but while everyone else seems happy, Gwyn is single, but happy too.

I was not expecting to like Miami Rhapsody. My dislike of another Sarah Jessica Parker show made me question my choice, but what a pleasant and funny surprise Miami Rhapsody turned out to be. The beauty to the film is that David Frankel gave Parker the spotlight to just be funny.

This is Gwyn’s story and every moment that Parker is on the screen, she is not only genuine in her innocence and neurotic tendencies, but Gwyn is also sweet, charming, and hilarious. The script may have been written by the talented Frankel, but Sarah Jessica Parker makes the story sizzle with her approach to the character.

While Parker is the star, the supporting cast of Mazursky, Farrow, Pollack, Gugino, and Antonio Banderas are excellent in their roles. Their characters choices might be questionable at times, but their redeeming qualities more than make up for their faults.

If you dislike Woody Allen movies, then you may wish to steer clear of this film. It’s not an Allen picture, but it has all the same tendencies.

The movie depicts marriage in a very interesting way. It’s very much pro marriage and relationship to some extent, but everyone is cheating on their significant other and somehow justify their unfaithful behavior with frivolous excuses.

Miami Rhapsody is a surprise gem from the Touchstone/Hollywood Pictures vault. This is a film that was dismissed during its theatre release but really was unfairly tagged with a label of being a knockoff of Woody Allen. In my opinion, I enjoyed Miami Rhapsody far more than anything Woody Allen ever produced.

The characters are likable, even when they are at their worst, and Sarah Jessica Parker proves early on in her career how talented and funny she is as she leads this star studded and talented cast.

Miami Rhapsody is the perfect choice for a travel film and gets a 3 Reels rating on “The Streamy Scale”.

Next week Meryl Streep and Liam Neeson play protective parents who have a secret to hide in the mystery Before and After.