With the release of Chip ‘N’ Dale: Rescue Rangers on Disney+, I knew there’d be tons of little hidden fun and easter eggs hidden throughout, but I was pleasantly surprised by the amount of these things. Almost every wide shot had something hiding in it, and the cartoon buff in me was also incredibly pleased by the amount of character appearances that aren’t even called to attention.

While I’m sure there are enough things to find upon later viewings, this is just a list of some of what I found on the first go-round. Heck, I might even add to this list after I watch the film more! The film is fantastic and I will probably watch it numerous times. Also, be aware that as I point out where to find some things, I get specific as to where they all happen throughout the film so consider this a SPOILER ALERT.

First, let’s start off with all those characters that make cameos throughout the movie. Chip ‘N’ Dale: Rescue Rangers has TONS of characters from many different and beloved franchises populated throughout, many of which are mentioned specifically by name or have some sort of speaking role to make sure that viewers acknowledge them. The list I have here is just a handful of characters I spotted throughout the film that don’t speak, are a quick glimpse, or even appear in the background of a crowd scene. 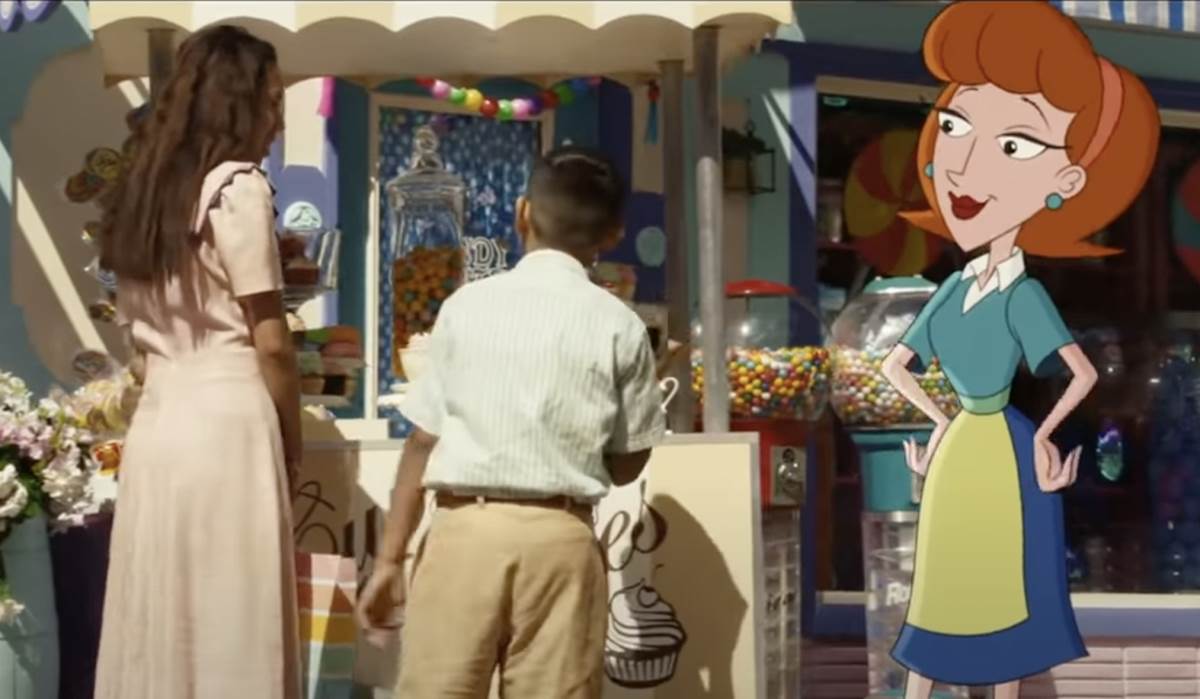 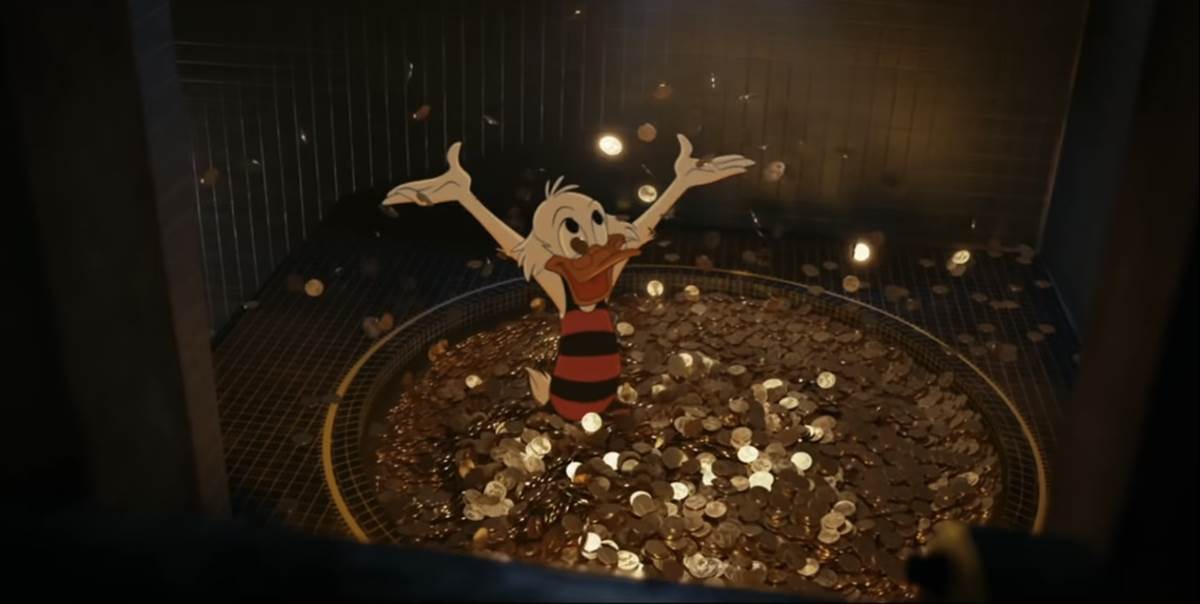 Who Framed Roger Rabbit: Chip ‘N’ Dale Rescue Rangers owes so much to the 1988 classic film, Who Framed Roger Rabbit, that took place in the early days of Hollywood and animation and created a world where toons lived alongside humans without blinking twice. Chip ‘N’ Dale Rescue Rangers clearly takes place in the same world just in the modern day. Therefore, CGI characters are now included in the mix. Someone somewhere on the creative team is aware of the film’s influence and paid homage to the classic film. Not only do we see Roger Rabbit himself early on at Chip and Dale’s celebration party dancing alongside the chipmunks, and a mention (though sarcastically) of seeing Jessica Rabbit off screen, there are several other references spotted throughout the movie.

At the beginning of the film, when we see Chip and Dale at their elementary school, a look around the cafeteria reveals a mural of cartoon-y hillsides. While not exactly the same as what we saw in Roger Rabbit, the hillside depictions and cartoon sun are similar to what visitors to Toontown first encounter when they arrive through the tunnel. 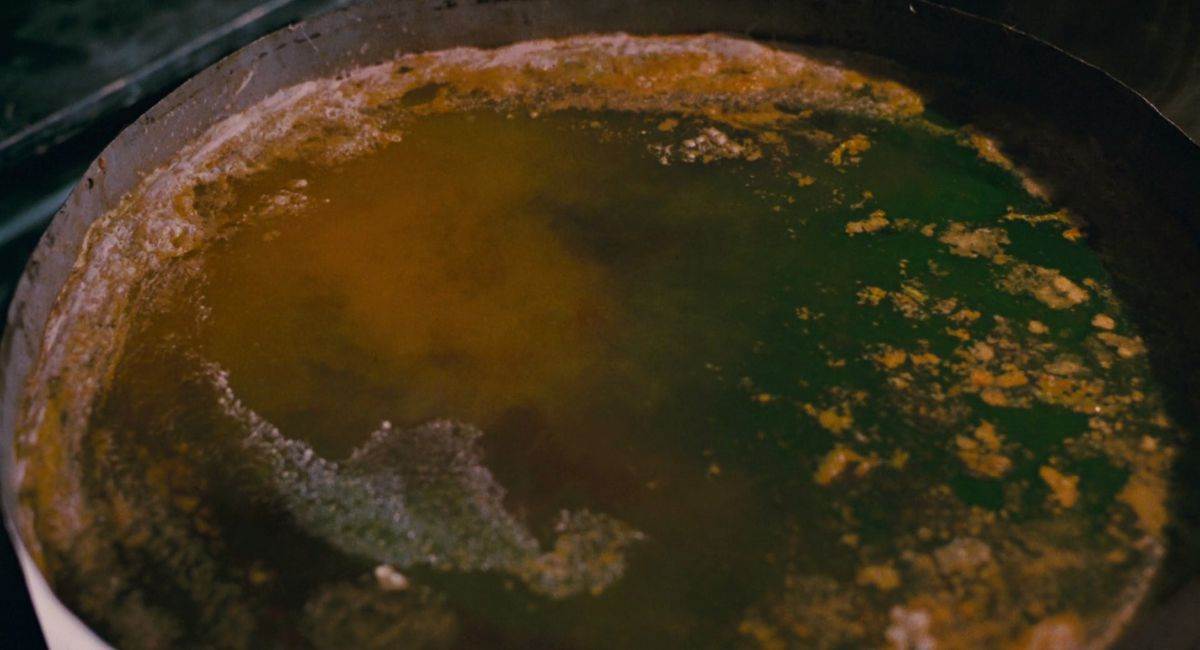 When Sweet Pete has Chip trapped and ready for surgical alteration, he opens a bag of tools including a set of  knives, pencils, erasers, and DIP. In Who Framed Roger Rabbit, DIP is a substance created by Judge Doom and the Weasels to permanently erase toons. Created from Acetone, Benzyne and Turpentine, the greenish orange substance immediately dissolves toons like a sort of paint thinner. Considering Sweet Pete has already been known to simply erase the mouths of some characters so they can’t scream for help, it really comes as no surprise that he has this awful chemical substance in his work kit ready to be used on toons. 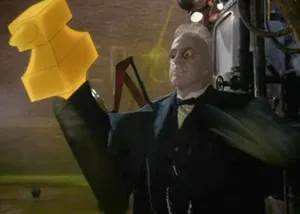 At the end of Who Framed Roger Rabbit, we see Judge Doom’s truly animated nature. While attacking Eddie Valiant, Doom pulls off his glove and turns his hand into an animated anvil and punches the private detective across the ACME Warehouse floor. In Chip ‘N’ Dale Rescue Rangers, we see this exact human vs. toon situation play out yet again when Detective Putty has Ellie cornered and his clay fist becomes an anvil. While that is more subtle, the scene also plays off of Terminator 2: Judgment Day, where the villainous T-1000 can take the shape of anything (including weapons) that he wants. A similar musical underscore emphasizes this reference, and an homage to Terminator 2: Judgment Day is also wildly appropriate in a movie full of animation references, as animation and visual effects processes created for that film (that were also used in Jurassic Park) paved the way for modern animation and visual effects that populate cinema today, including those used in Chip ‘N’ Dale: Rescue Rangers. 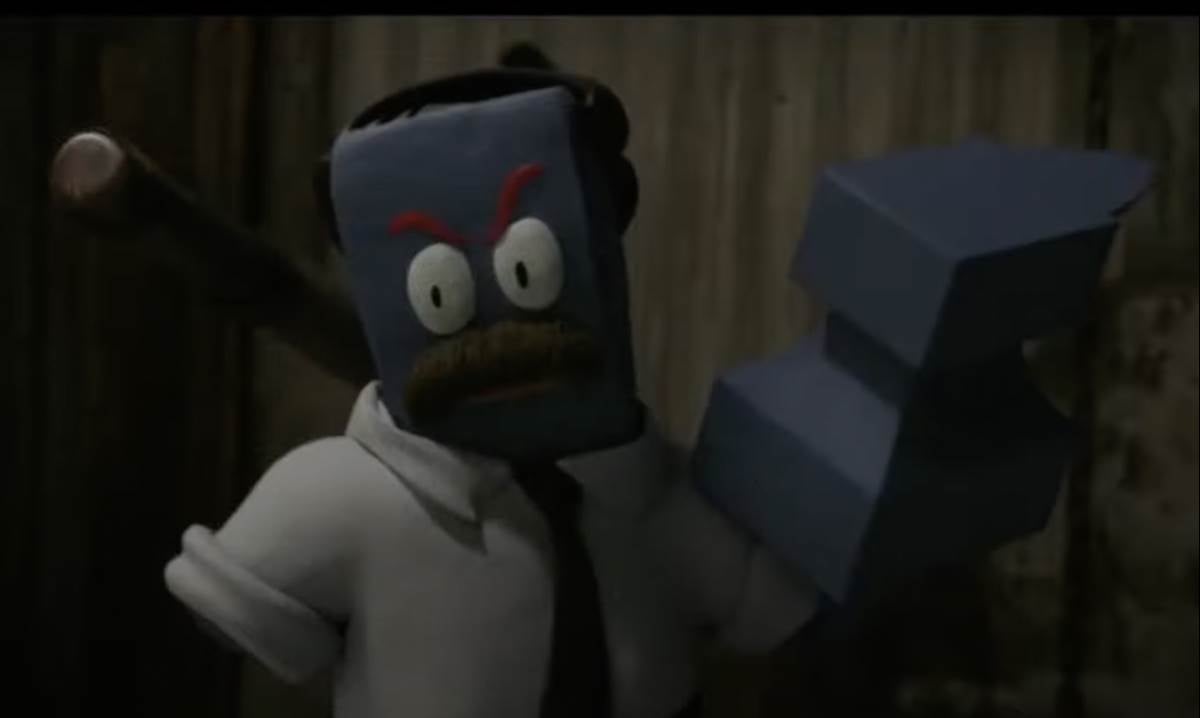 At various points throughout the film, our friends can be seen on the Hollywood streets where billboards are spotted throughout the background. Granted, they’re not real despite how bad I want them to be.

Doug Funnie and his dog, Porkchop, were the stars of Doug, which may be surprising for many to see here in this Disney film based on Disney Afternoon characters. Why? When Doug originally debuted as one of the first three Nicktoons on Nickelodeon, which were made to bring creator-driven animation to the cable network to compete directly against syndicated afternoon shows. You know, like Chip ‘N’ Dale Rescue Rangers. However, Doug was later purchased by the Walt Disney Company and became a staple for ABC’s One Saturday Morning block with new episodes and even a theme park show based on the series.

Johnny Bravo, an original creation for Cartoon Network who was a self-proclaimed ladies man can be seen further back in the same shot as the Doug Funnie Billboard alongside marketing for….

Remember Emojis: The Movie? Yeah, I try not to either. However, it looks like there is a similar film in this faux Hollywood based entirely on the GPS Navigation app, Waze. Hopefully it won’t have any animated poop emojis anywhere.

This one is more of a bus stop ad, but it is seen and features one half of the Mike Judge created MTV pair, Beavis and Butthead, and Butthead seems to be taking a serious crackdown on bootlegging law. Similar to what Chip said when he saw Batman V. E.T., yeah this one might be good. Jumping onto the trend of The LEGO Movie, The LEGO Ninjago Movie, and The LEGO Batman Movie, the billboard for LEGO Miserables actually seems enticing enough that we hope it was real. And in a way, this can also be connected to voice-of-Chip John Mulaney, as he (in)famously wrote an SNL Sketch, “Lobster Diner,” that served as a musical parody of Les Miserables. 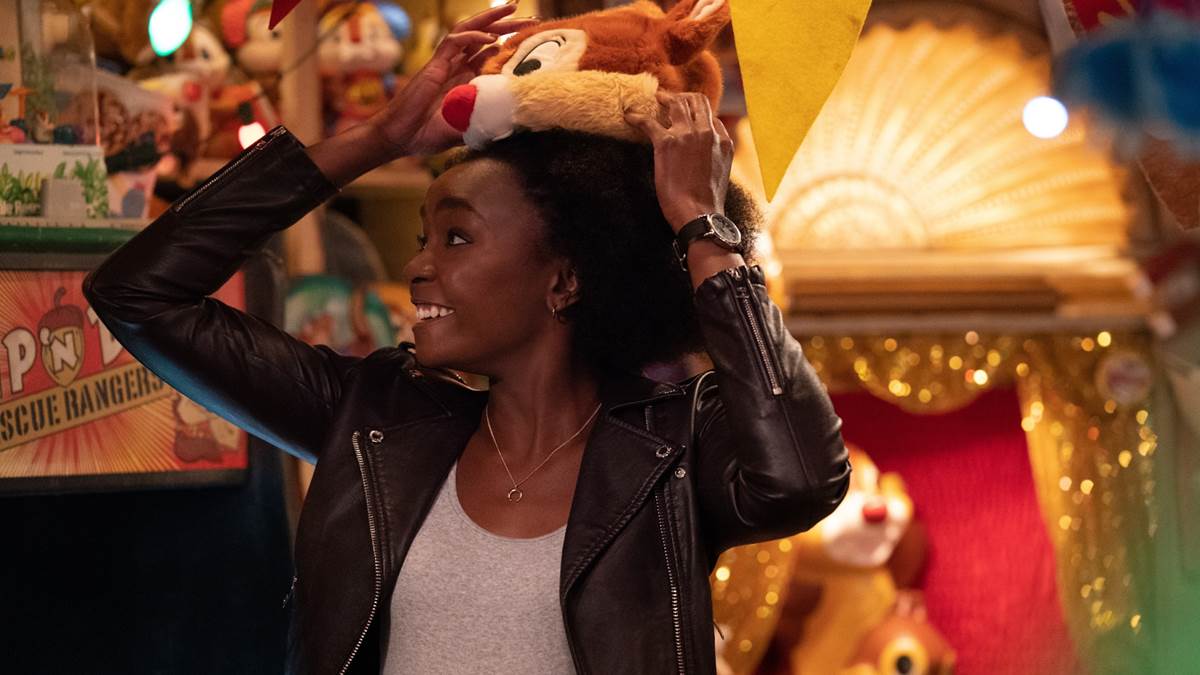 Chip ‘N’ Dale: Rescue Rangers fans are sure to recognize much of the merchandise in Dale’s garage, including the video games, toys, and vhs tapes. Disney Parks fans are also sure to spot merchandise that is more recent from the parks, including plush hats and plush toys that come in pairs.

When we get to the Sweet Pete’s lab, we see plans for all kinds of bootleg character hybrids on the walls, including mashups of:

Felix the Cat and The Pink Panther

Gus Gus (Cinderella) and the Tweedles (Alice in Wonderland)

Syndrome (The Incredibles) and Sideshow Bob (The Simpsons)

When cycling through possibilities on the bootlegging machine, several different styles come up showcasing Chip and Dale as classic rubber-hose animation, Superheroes, and even more specifically as The Simpsons-style characters, Rick and Morty styled, and we even see the duo as a Ren and Stimpy-type characterization. 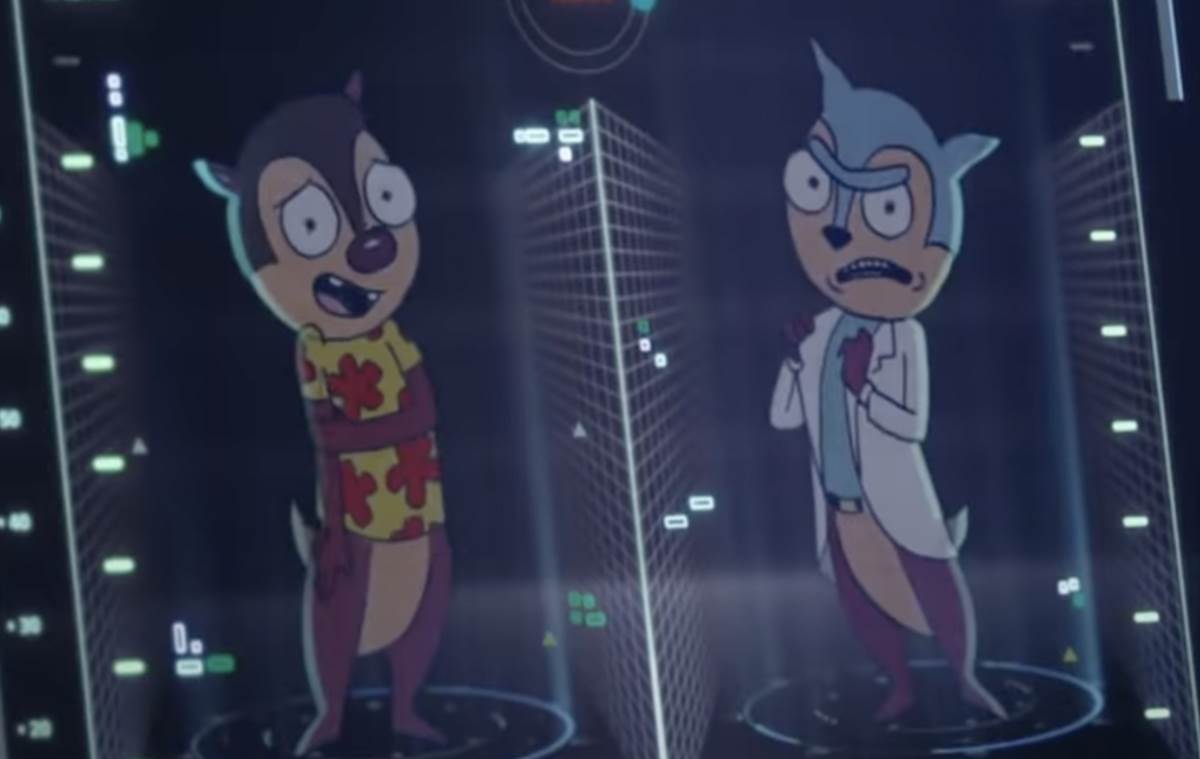 The Wall of Parts:

When the gang discovers a locker full of cartoon parts and pieces, you all but need to freeze frame and stare for 20 minutes to identify each one. At first glance however, fans can spot Jiminy Cricket’s Umbrella and Hat, the Mad Hatter’s Hat, Jimmy Neutron’s Hair, the scalp of Dr. Doofenshmirtz, Pikachu’s tail, Rocky Squirrel’s Pilot’s Hat, and so many more. One thing that a specific sect of fans is sure to notice in this closet is a Keyblade from the Kingdom Hearts video game franchise. There could be a wikipedia page dedicated to this moment alone in the film and everything in here alone.

When the captured bootlegged toons are finally freed out of the shipping container at the end of the film, a slew of character hybrids all pour out but the one that immediately caught my eye is Bonkers, a later addition to the Disney Afternoon programming block. Other characters we’ve spotted included as bootlegs include Bigfoot from A Goofy Movie, Woody Woodpecker, Phineas Flynn, Abu from Aladdin, Launchpad McQuack, and Patrick Star from Spongebob Squarepants. 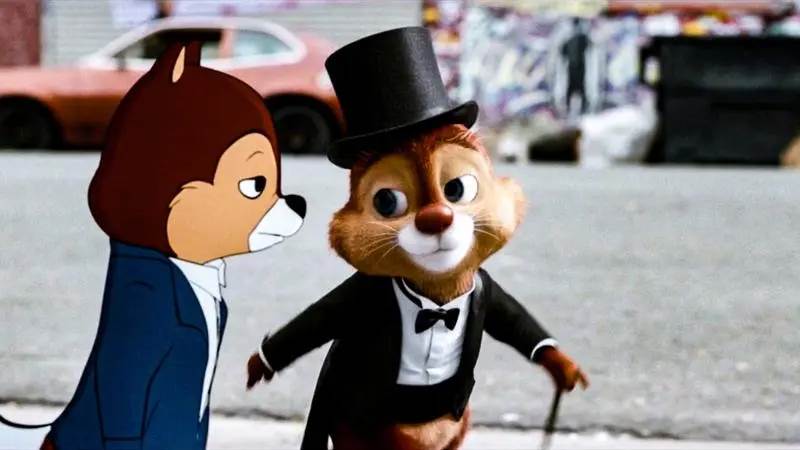 Located in the background as the ‘munks approach Main Street, eagle-eyed viewers can notice a bit of graffiti behind the duo. However, that’s not just random street art. It appears as though Miles Morales from the Academy Award Winning animated film, Spider-Man: Into the Spider-Verse, has been on these streets and is still drawing that familiar art.

Early in the film when Chip is at home, he gets ready to serve up some food and opens up his freezer. We get a quick glimpse of the products inside, including Ice Age Ice Cream and Looney Tunes Frozen Food, before he lands on his dinner selection, the Frozone Vegetable Medley which has The Incredibles hero blazoned on the cover of the nutritious(?) meal.

I feel like every movie that celebrates the art of animation, especially nowadays, has some kind of reference to the Nine Old Men, the classic animators who worked with Walt Disney and developed and mastered the artform. The Nine Old Men (as far as I can tell so far) aren’t referenced individually, but in the shipyard at the end of the film where all the missing characters are being kept in a shipping container featuring signage for the NINEMEN Boat Shop.

Think that was the only reference to the master animators? We spotted another quick glimpse of the book Walt Disney’s Nine Old Men & The Art of Animation. 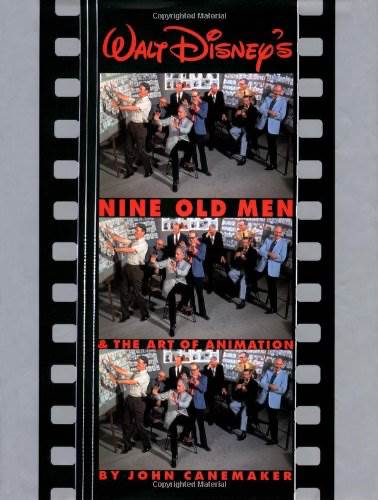 You can spot the book too, sitting appropriately enough on Chip’s coffee table while he is watching Batman Vs. E.T.

You can watch Chip ‘N’ Dale: Rescue Rangers now streaming on Disney+ and spot the ones I likely missed!