With Top Gun: Maverick soon to be released, this week is devoted to a forgotten film from the Touchstone Pictures vault that directly uses the Top Gun formula, Fire Birds. There’s no Pete Mitchell, instead, we get Jake Preston played by Nicolas Cage, who needs the guidance of an elder pilot played by Tommy Lee Jones to get him up to speed for an important mission. 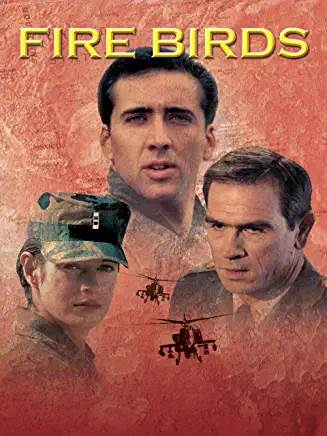 Jake Preston is hot shot Apache helicopter pilot who barely survives a mission in Mexico. The United States government has issued a proclamation stating that they will help any country take on the drug cartels. A joint taskforce operation between the US and Mexico ends in tragedy, and thanks to Preston’s enthusiasm and the will of the President of the United States, a new mission is assembled.

The one catch is that the Apache helicopter pilots need to be better trained to survive the fight with the drug cartels. An elder ace pilot named Brad Little is brought to lead the training. He takes a shine to Preston immediately. Little’s mentor role helps Preston through the ups and downs of training, and when the new mission is launched Little, Preston, and the rest of the army will find themselves in a deadly duel for survival.

Nicolas Cage is great. This is the earliest sign of his blending between creative character development and the tough guy action role that Cage plays well. Preston is arrogant but likable and that is thanks to Cage and his approach to the character.

There is no one else, except Tom Skerritt, who could play the mentor role like Tommy Lee Jones. He’s tough, with a soft spot, and supremely confident in his ability to make great pilots. Cage may be the star, but Jones has an equal footing in the movie, and thankfully he gets to be one of the pilots in the final battle.

Tommy Lee Jones and Sean Young have the best scene in the film. Near the climax of the film, Jones must instruct Young on how to make a rocket launcher out of a wrecked helicopter. The interplay between the two is pure gold.

Fire Birds is the Top Gun of helicopters. While I found they used the formula well, if you aren’t a fan of the gung-ho military adventure films, you might want to sit this movie out.

While I enjoyed Fire Birds it’s not an essential watch. The movie gets 1 Reel on the Streamy Award category. Don’t go out of your way to watch the movie, but if you catch it online, Fire Birds would make a great film to pass the time while sitting on the bus or subway.

Next week, When in Rome. We get to see Kristen Bell search for love, steal coins from a fountain in Italy, and face the consequences of her actions.