The last time Lucasfilm’s Vice President and Executive Creative Director Doug Chiang was at a Star Wars Celebration event in 2019, Disney+ hadn’t launched yet. The studio was keeping the secrets of The Mandalorian quiet, so this most recent event in Anaheim was the first time Doug was able to speak freely about designs created not only for The Mandalorian but also The Book of Boba Fett. Here’s a recap of the panel called “c.” 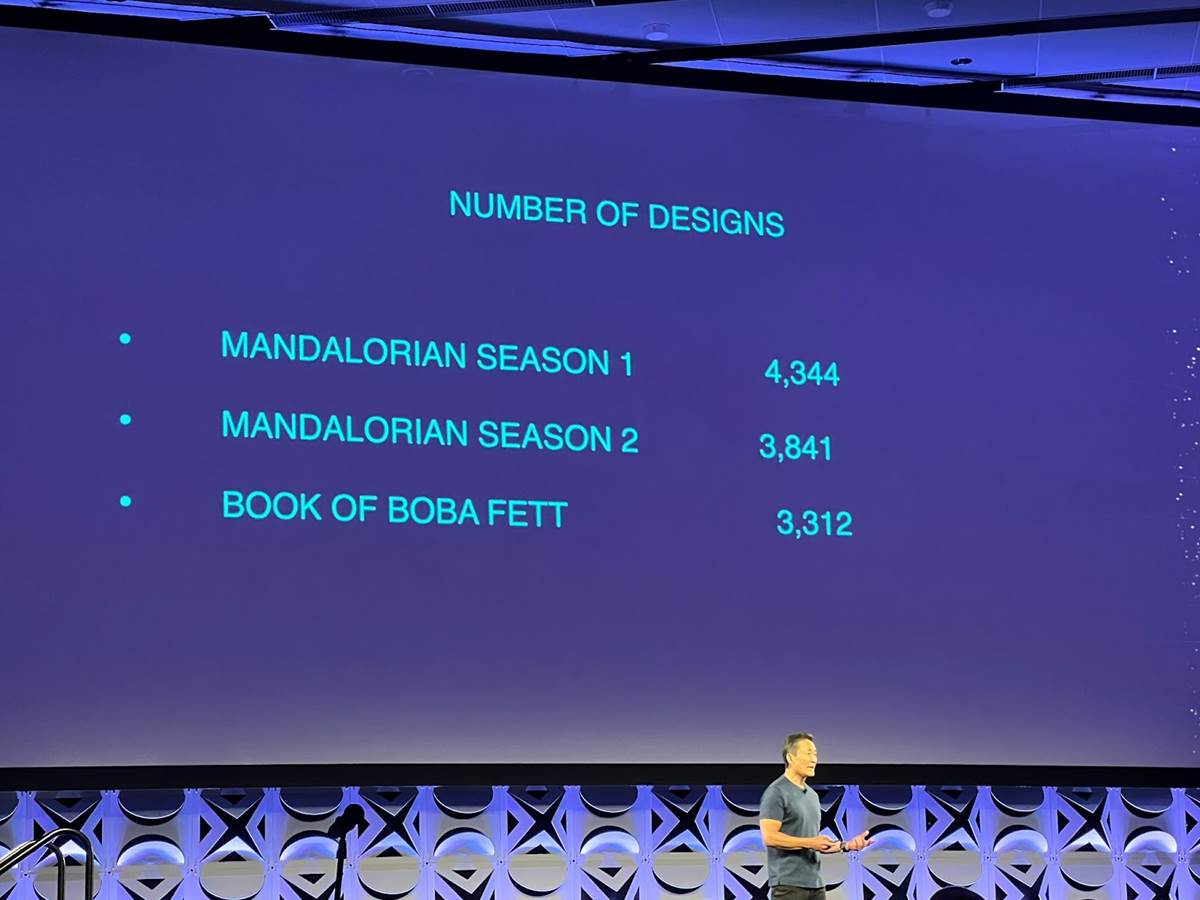 Over the past four years, Lucasfilm has developed designs for the equivalent of seven features (that’s more than two trilogies worth of work!). That’s a daunting task, although Doug Chiang explained that the team was able to heavily lean into the work that Ralph McQuarrie and Joe Johnston did for the original trilogy, plus to work Doug and his colleagues did on the prequel trilogy. When work began on development for The Mandalorian in 2017, one of the goals of the project was to marry the esthetics created for the prequel trilogy with the original trilogy.

Having spent the first seven years of his time at Lucasfilm working under George Lucas, Doug Chiang said that working for Dave Filoni and Jon Favreau felt like working under the Star Wars creator again. Both visionaries would even provide Doug and his team with quick sketches of what they had in mind, from which development could progress. Such was the cast with the silhouette of Din Djarin, who needed to be a Mandalorian while not being confused with Boba Fett at first glance. Drawing inspiration from the past, the puls rifle Boba Fett used in The Star Wars Holiday Special became part of the character’s silhouette, always placed at a specific angle when on his back. Particularly in the first season, the character’s armor needed to change as the story unfolded.

With Jon Favreau’s experience with computer-generated projects that pushed filmmaking into new frontiers, visual development work could continue even after the cameras had stopped rolling on principal photography. Doug showed a graph that revealed that the amount of time spent on a piece of art reaches a plateau in quality relatively quickly, which was the secret to success on designing The Mandalorian. The Razor Crest, for example, was designed in just two weeks, but the design was fine-tuned over a longer period of time. One of the most difficult elements of the Razor Crest was the boarding ramp because it needed to be practical enough for use on set but also had to work with the ship’s design. Grogu, the most closely guarded secret on set for the first season, created some new challenges for the team. Shrinking Yoda down wasn’t as appealing as you might think, with the character’s eyes being the toughest part to design. Working under Jon Favreau’s “ugly cute” guidelines, the secret to making The Child an appealing character came from man’s best friend, dogs. Instead of having an iris like Yoda, Grogu’s eyes are mostly pupils with just a little bit of white on the sides, similar to a dog’s eyes.

Jumping into Season 2, the Eadu Base from Rogue One: A Star Wars Story served as the source of inspiration for Moff Gideon’s base on Nevarro. Doing this allowed for a speedy design, reusing the same crater for sets and swapping metal set dressings with concrete to make it look different. Another repurposed asset was the Juggernaut turbo tank, the latest iteration of a design that was first created but unused for the Battle of Hoth in Star Wars: The Empire Strikes Back. It’s been seen on screen before in Star Wars: The Rise of Skywalker, but for The Mandalorian, it was expanded to be a land train, also described by Doug as a “centipede truck.”

The Krayt Dragon first appeared as a skeleton in Star Wars: A New Hope and has appeared in other canon media. For The Mandalorian, the team decided that these creatures grow legs as they mature, but start out more snake-like. Jon Favreau made the decision to never show the creature’s full body, but the team designed it anyway. A three-dimensional maquette was created to assist with the design and Doug shared that Krayt Dragons have sixteen legs and can grow up to 150 feet long. 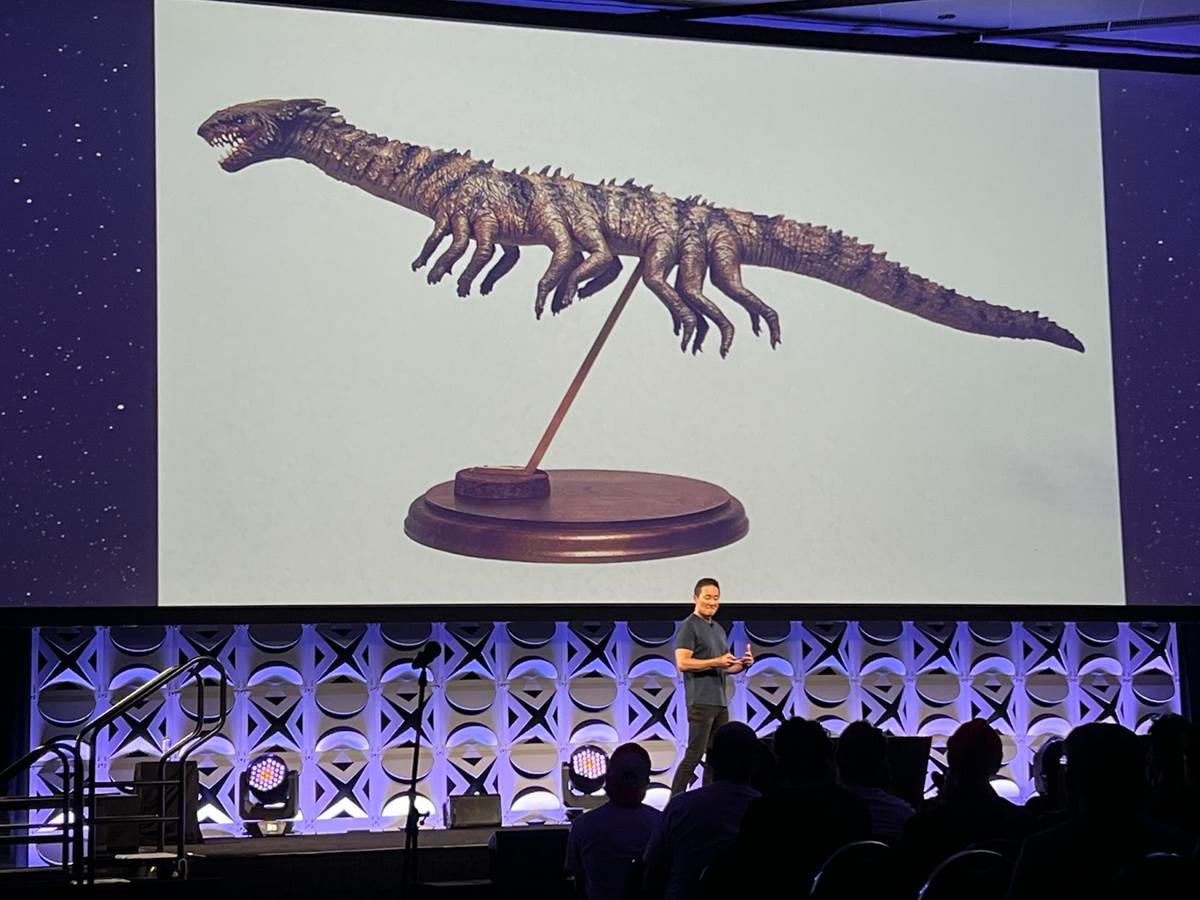 When the story required the creation of a new ice planet called Maldo Kreis, Doug Chiang recognized that the biggest challenge would be differentiating it from Hoth. The planet was inspired by Icelandic glaciers, but also presented an opportunity to adapt another Ralph McQuarrie design that went unused in Star Wars: The Empire Strikes Back. Now known as the knobby white ice spider, the creatures were originally designed to appear on Dagobah. The sequence in the episode was at one point going to build up to a giant Kaiju spider, but that concept was scrapped. While a Godzilla homage didn’t make it into the series, the loose rancor in The Book of Boba Fett was in many ways inspired by King Kong’s rampage of New York City. That sequence also included a droid designed for Star Wars: Attack of the Clones, the Scorpenek droid.

Season 2 of The Mandalorian gave Doug Chiang many opportunities to repurpose designs from the prequel trilogy. Most notably, a Naboo Starfighter becomes Din Djarin’s new ship, which required the team to design the chassis since we would see it being worked on like a classic 50s hotrod. The design was customized for the character by leaving elements of it unfinished, including leaving the front exposed to give it a sharper look. It was also decided that Cobb Vanth’s speeder would be built around a restored podracer engine. Many designs were explored, but ultimately the team chose one of Annakin Skywalker’s engines. 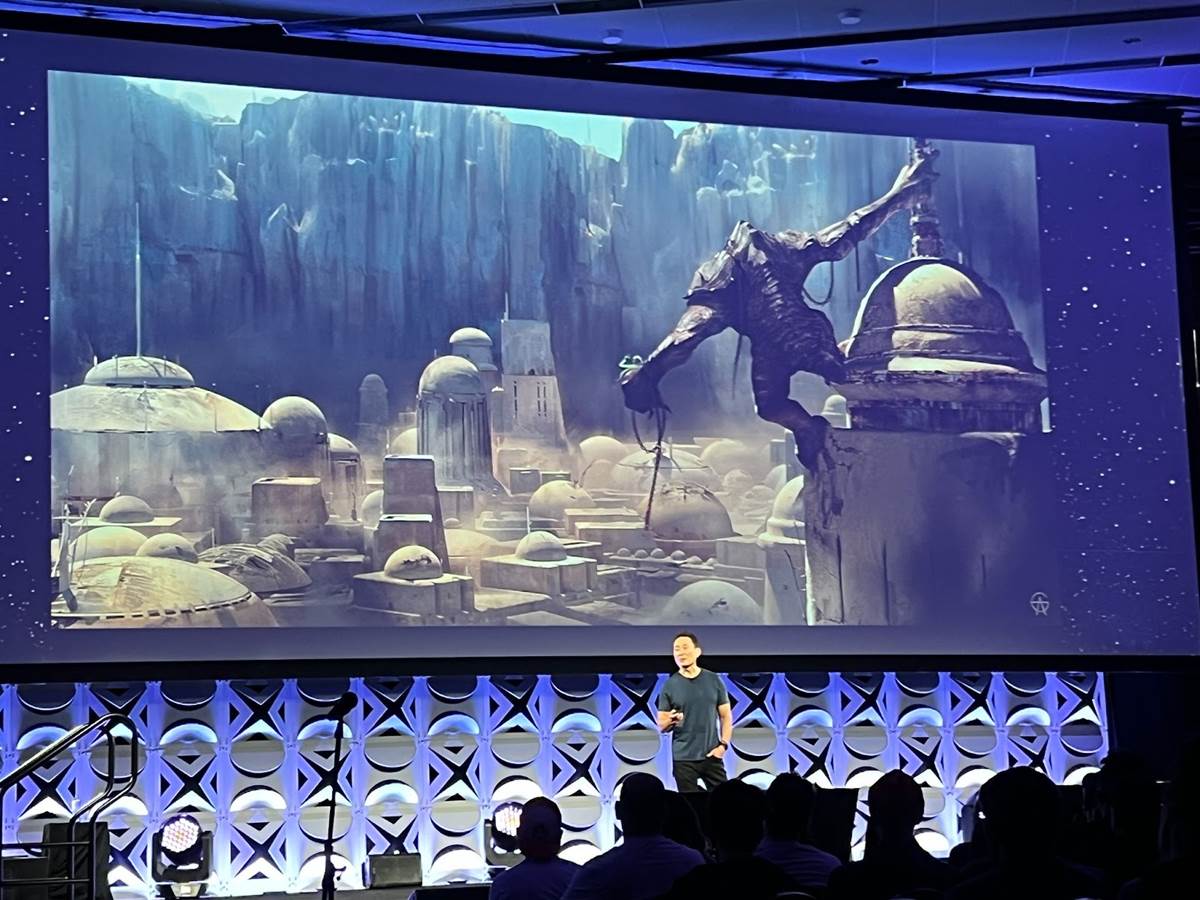 Bringing the presentation full circle, The Book of Boba Fett gave Doug and his team the task of figuring out how the interior of the Slave I worked. It was decided that the cockpit would remain fixed, while the floor of the rest of the ship would remain horizontal if the rest of the ship changed position. Doug gave credit to Ryan Church for solving the design solution.

“Star Wars design is Ralph and George,” Doug Chiang concluded during a Q&A that followed his presentation. This was evident throughout the presentation not only in the number of times Ralph McQuarrie’s designs were referenced or designed, but also following George Lucas’ principals that the world is 80% grounded in reality and 20% made up. While the team has produced an unprecedented number of designs in a short period of time, Doug said it was made possible by working on an average of four shows at a time all set within the same period of Star Wars history (in addition to The Mandalorian and The Book of Boba Fett, he is also referring to upcoming shows Ahsoka and Rangers of the New Republic).