It’s dinosaur time at the box office this weekend with Jurassic World Dominion, but do you remember when Touchstone Pictures made their dinosaur movie? That’s right, it’s time to travel back in time for a prehistoric adventure with Baby: Secret of the Lost Legend. 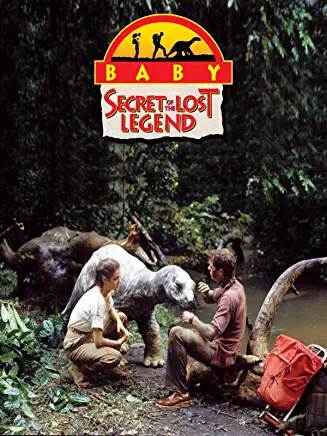 In the jungles of Africa, a secret is waiting to be found. For Dr. Eric Kiviat, he is willing to do anything to find the hidden wonders. His grad assistant Susan Loomis is about to leave having not made any significant discoveries. She and her husband George will soon leave for the United States, but a puzzling mystery causes Susan to embark on a deadly quest into the jungle.

George sets out after Susan and when they are reunited, they learn the secret of Dr. Kiviat. Dinosaurs are alive and living in the remotest part of the world. Together Susan and George watch a family of dinosaurs be attacked by Dr. Kiviat, with the father being killed, and the mother taken by Kiviat and his armed goons.

Saving the baby, whom they name Baby, they set out to free the mother dinosaur and reunite what is left of this prehistoric family.

Dinosaurs! I mean the movie is all about what if dinosaurs were still alive and living in the wild, and Baby: Secret of the Lost Legend delivers on that. The special effects still hold up in many instances, and as you watch the film, one can suspend their disbelief and believe in Baby as being real.

It’s the 1980s and if you need a villain to be distinguished and dignified with a side of nasty, Patrick McGoohan is the best choice. McGoohan is delightfully evil in his role.

The script has many questionable moments that make you wonder what they were thinking at the time of production. I’m not going to complain about all the things that I disliked, just this one notable moment. In the middle of finding Baby, escaping Dr. Kiviat, and staying alive in the jungle, somehow George and Susan decide this is the perfect moment for sex. It is strange, just plain wrong, and weird. This moment makes the viewer have little regard for Susan and George.

William Katt’s George is the tag along, reporter, who somehow manages to become the greatest American hero (pun intended). He morphs from this reporter eager to leave to Crocodile Dundee, which he is not.

Showing the viewers who the villain is in the first two minutes of the film leaves no suspense for the story. What a giveaway, that is unnecessary and destructive to the story.

Dinosaur cinema fans will certainly want to check out this film, but personally Baby: Secret of the Lost Legend gets 1 Reel on the “Streamy Award” category. The film does not hold up. The effects for Baby look good, but special effects can only do so much to make someone want to watch a movie.

A movie needs a compelling story, characters to root for, and plot that is well thought out. Baby: Secret of the Lost Legend is best left in the past unless you have some time to waste.

School is out for the summer, and next week we look at a film that has one of the most brilliant self-taught students that Mary Steenburgen or Lance Henricksen has ever seen, Sean Patrick Flannery’s Powder.