Walt Disney Animation Studios just finished giving a look-ahead at what’s to come this year at Annecy Festival. The big headline is that we learned new plot details about Strange World, which features a character with a same-sex crush. But we were also the first to see footage from Disney+ series Baymax! and Zootopia+ and Chief Operating Officer Jennifer Lee was awarded with a custom Cristal Award for her contributions to the animation industry. It was a fitting first visit for the head of Disney Animation, who was overwhelmed with gratitude and the outpouring of love, not only from the Annecy audience but from studio talent who surprised her with a recorded thank you from Burbank.

Clark Spencer, President of Walt Disney Animation Studios, explained that Big Hero 6 director Don Hall pitched the idea for a short series starring Baymax from Big Hero 6, an original character he created for the film. One of the great benefits of Disney Animation getting into episodic content for streaming is that it gives even more talent at the studio the chance to direct, with most of the directors on the series making their directorial debut. The Annecy audience was the first in the world to see the first short in the series, in which Hero’s aunt Cass sprains her ankle and Baymax tries to help her rest by filling in for her at the Lucky Cat Cafe. Let’s just say Baymax isn’t the best barista in the world, leading to some hilarious and heartwarming moments. Baymax! starts streaming June 29th. At a pitch program two years ago from all over the studio, which resulted in over 200 submissions, the idea for a short-form series that expands the world of Zootopia quickly rose to the top. Directed by Trent Correy and Josie Trinidad lead this series where each episode changes genre, from a reality series to a dance competition. We were shown a short from the series centered around Mr. Big, titled “The Godfather of the Bride,” which relays the rodent boss’ origin story on this, the day of his daughter’s wedding. If you thought grown-up Mr. Big was cute, wait until you see him as a child! Zootopia+ launches on November 9th.

Heading to the big screen on November 23rd, Walt Disney Animation Studios’ 61st animated feature was introduced by producer Roy Conli, who began his presentation speaking French (his long list of credits includes The Hunchback of Notre Dame, animated at Disney’s Paris studio). Inspired by turn-of-the-century pulp novels by Jules Verne, Edgar Rice Burroughs, and H.G. Wells, Strange World tells the story of a family on an incredible adventure, directed by Don Hall and co-directed by Qui Nguyen (Raya and the Last Dragon), who also serves as writer. Both directors were inspired by their relationship with their fathers as well as how they raise their own sons.

Roy Conli walked us through the story, presenting what feels like the first act of the film. The story starts in Avalonia, a valley surrounded by mountains so steep that any explorer who has tried to climb out has never returned. Jaeger Clade (Dennis Quaid) and his son Searcher Clade (Jake Gyllenhall) set out on an expedition to discover what lies beyond the mountains, but get in a fight when Searcher discovers a magical plant that could benefit Avalonia, wishing to abandon the mission and take the plant home. During their right, Jaeger proceeds on the quest alone, never to be seen again, while Searcher returns to the valley.

Flash forward 25 years when the plant, named Pando, has created a prosperous community. Searcher and his wife Meridian (Gabrielle Union) run a Pando farm with their teenage son Ethan (Jaboukie Young-White) and their three-legged dog Legend. In the first sequence we were shown, Ethan’s friends pull up in a hover truck with a new pack of collector cards. Ethan is clearly shy around Diazo, who seems to return his affections but both boys are too shy to make the first move. Ethan is bummed that he gets a farmer card, so Diazo offers to trade him his explorer card, adding that it seems more like him. Searcher interrupts the conversation, excited to finally meet Diazo and being adorably over supportive of his son, whom he seemingly tries to be best friends with. 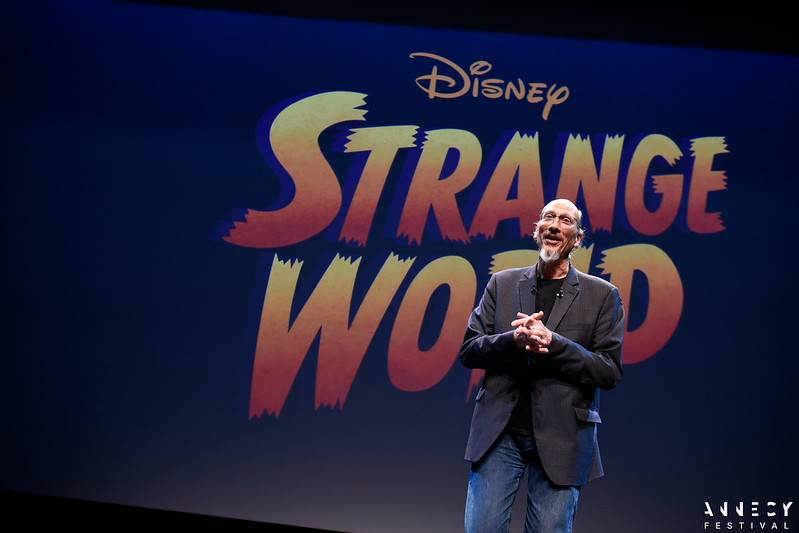 Conli filled in the gap between that scene and the second one we were shown. Something bad happens to the Pando crops and they are all dying, sending Avalonia into peril. An explorer named Calisto Mal (Lucy Liu) leads an expedition beneath the planet’s crust to find out what’s going on and Searcher agrees to join her. Ethan is desperate to go, but Searcher refuses to put his son’s life in danger. In the clip we saw, Calisto pilots a unique ship through caverns beneath the surface when a vessel flies behind them and calls for them to stop. It’s Searcher’s wife Meridian warning them that she believes Ethan stowed away. Sure enough, Ethan and Legend are discovered on board just as the ship is attacked by pink winged creatures. They send the ship into a free fall and it plummets, breaking through a rock barrier and bouncing into a spongy colorful world seemingly at the center of the planet. During the turbulent landing, Searcher and Legend fall off the ship and get separated from the rest of the expedition.

In the final sequence we saw, Searcher and Legend begin exploring the terrain, soon finding a character named Splat, a squishy blue blob with many appendages. Earlier in the presentation, Roy showed some test animation of Splat walking on 6 legs, 2 legs, and hiding in plain sight. He’s a really fun character and one that he promises will become a fan favorite. In several ways, he reminded me of Morph from Treasure Planet.

As a fun fact for Disney Animation fans, Don Hall always includes Disney Legend Burny Mattinson on his projects. For this one, when Burny was presented with the concept, he suggested that Don add a dog to the family to help ground them in reality. He was resistant at first but soon realized Burny was right. He named the character Legend, which is also Don’s nickname for Burny.

The Annecy audience enthusiastically applauded all of the projects presented by Walt Disney Animation Studios, but perhaps the most touching element was the way they showered Jennifer Lee with love and praise. She received a standing ovation while accepting her award and gave an impassioned speech about the strength of the animation community and how proud she is of the team at Walt Disney Animation Studios, particularly the way they turned a pandemic into the studio’s most productive period ever. As the studio nears its 100th anniversary, she shared that projects like Strange World further Walt Disney’s legacy of powerful storytelling while pushing the animation medium further than ever before. 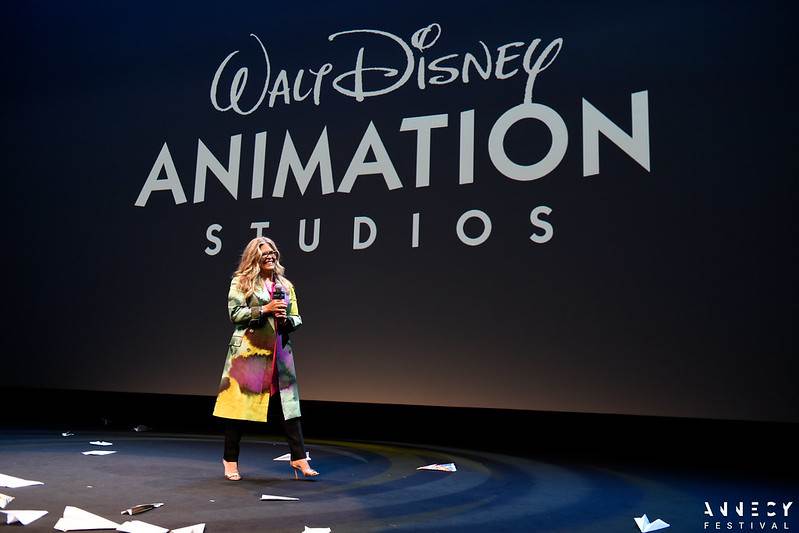