The highly anticipated next installment of the Thor saga is almost here and fans are very excited. The stars and creators of the upcoming Thor: Love and Thunder got together for a virtual press conference today to discuss the evolution of their characters, the balance of comedy and drama in the MCU and more. 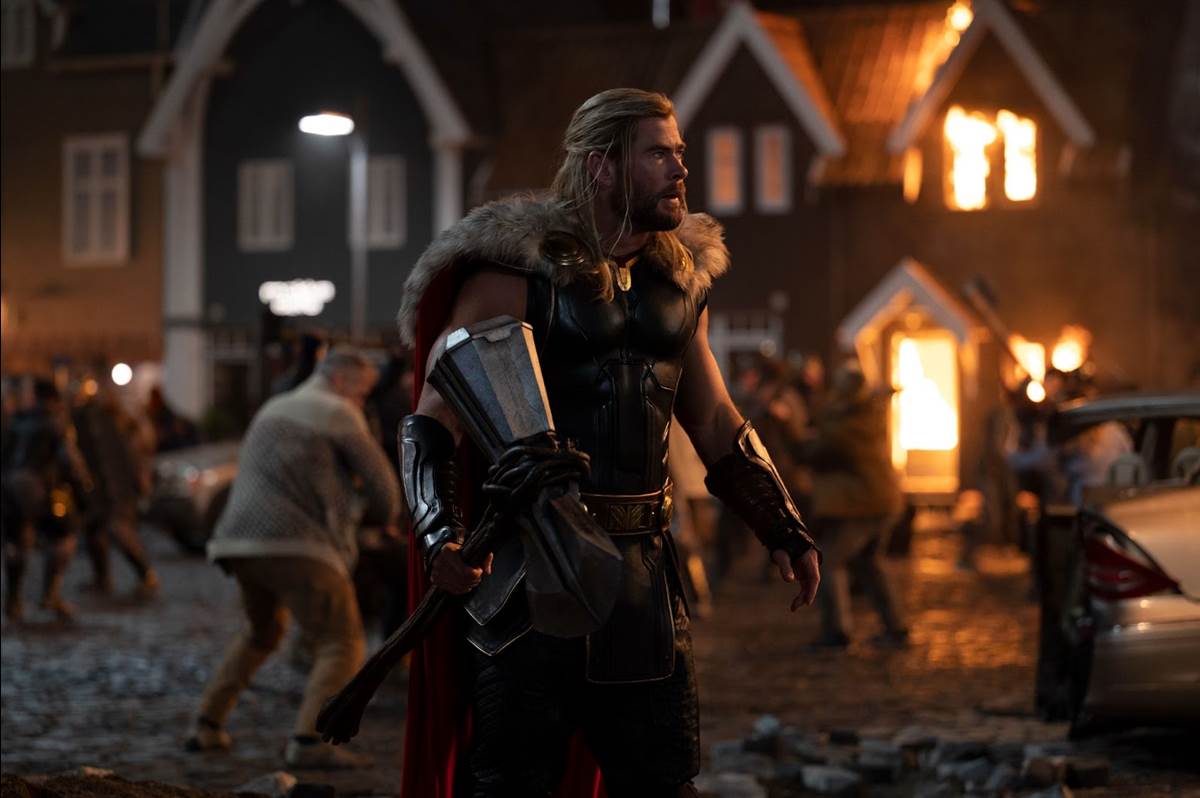 Hemsworth opened things up by talking a bit about the evolution of Thor qualities in him to which he most relates himself.

“Since Taika got involved, he brought out the immature, young, adolescent quality that I embody,” Hemsworth laughed. “The northstar is about having fun, you know? Embodying this space as a child would and enjoying all of it and being caught up in the wonder and the fascination of all of it and not getting bogged down in the serious nature that we can when making films. Personally, with these kinds of films, I think they’ve got to be fun.”

Feige was asked about why he thinks audiences have connect so much with Thor over the years and what makes the character so popular.

There’s also a fun new dynamic in this film with the return of Mjolnir making things a bit awkward for Thor. And, after checking with Feige first, Hemsworth touched a bit on that dynamic.

“It’s hard to see, the ex girlfriend shows up, dressed as him, that’s a shock. All of the sudden the weapon that he held so dear and so on for so many years now belongs to somebody else,” Hemsworth said. “And then he has Stormbreaker who starts to sense a little, there’s a little jealousy there.”

One of the biggest draws of this film is the return of Natalie Portman as Jane Foster and seeing her take up the mantle of Thor. She was asked what this experience was like for her.

“It was pretty wild, of course, after seeing Chris wear the costume for so many years and then to try the version on myself,” Portman said. “Getting fitted for the arm cuffs and the boots and everything was pretty surreal for the first time.”

Portman of course transformed her body a bit to take on the role of Thor for the film and was asked about her training process. Hemsworth and Waititi cut her off be letting everyone know that she “led the charge in the gym” and she was always the first one there. Eventually, Portman did get to share some thoughts on the subject.

“It was a great challenge,” she said. “Tessa and Chris obviously have a lot of experience in that world so I got to learn a lot from them.” Portman was later asked about what it was like to shoot while playing a superhero as opposed to just a side character.

“I feel like getting this opportunity, first of all, was such an incredible way to explore a female superhero that could be quite vulnerable and find strength in that and be more like a human I could relate to personally,” Portman said. “And also it gave me renewed respect for what Chris has been doing for over a decade, Tessa’s been doing, because I see how much work goes into it that I don’t think I was aware of when I was just like the chick in the first one. I didn’t see everything that went on behind the scenes that when I got insight into all the choreography and the training and everything I was like, wow this is like a triple job from what I was doing back then.”

The new cast member among the group was Bale, who takes on the role of the villainous Gorr the God Butcher. The actor shared his thoughts on bringing this menacing character to life.

“There’s a great pleasure in playing a villain. It’s a lot easier to play a villain then it is to play a hero,” Bale said. “The beauty of it is that Taika can make it bloody hilarious and then really moving as well in this story. And then, you know, I don’t know if it’s pushing it too much to say sympathy, but certainly you sort of understand, maybe, why this guy is making awful decisions. And he is a monster and he is a butcher, but there’s a possibility of understanding why he’s come to be that way.”

Bale also shared some insight on what he went through to become Gorr for this movie.

“[I worked] with three absolutely brilliant special effects makeup people,” Bale said. “We did it every morning for, it started as four hours and then three and a half hours and they are absolutely as responsible for the performance of Gorr as I am.”

Bale also mentioned a planned dance sequence that he spoke with Waititi about that unfortunately never came to fruition.

“Perhaps only whispered between Taika and myself, would we ever find half a day to be able to do a Gorr dance,” Bale laughed. “We’re both Kate Bush admirers and wondered just how bizarre, it stayed in our heads.”

Thompson’s Valkyrie has gone from being a drunk scrapper to the King of Asgard in just a few movies. The actress was asked about what that journey has been like for her and her character.

“It’s been really fun, I mean it’s the thing that I really enjoy about these films and certainly something that Stan Lee talked a lot about, whether it’s a villain or a hero the thing sometimes that connect them to their power, whether it’s used for good or bad, is actually their trauma,” Thompson said. “And so when we first met Valkyrie she had a tremendous amount of it and she was dealing with that by drinking a lot. And for Taika and I, we talked a lot about upending what a female superhero looks like.”

She continued on specifics of what Valkyrie is dealing with now, in Thor: Love and Thunder.

“With this one, we also talked about the idea of someone that has a job they really love, but they're also kind of disgruntled,” Thompson said. “She, you know, was a professional soldier for thousands of years and now kind of finds herself kind of stuck in bureaucracy so she’s really missing being on the battlefield and missing her sisters and so it’s been very fun to get to have that again with Natalie in particular as Mighty Thor.”

Thompson was also asked about how this film balances the comedy and the drama, which Marvel has so often done so well.

“I think that’s what’s so fun about these movies and this one in particular is kind of holding that space between sort of the ridiculousness and the fun and the pathos,” Thompson said. “And I think that’s something that Taika has always done really, really well in his films and in this one especially I feel like he really was excited to lean into the emotion in a way that felt really, I don’t know, rich for us and I think really different than what we’ve seen particularly with themes of like love and relationships in this one that just felt really exciting.” Waititi expanded on the idea of finding that balance of comedy and drama for the film.

“A lot of that is found in post. On set we try to do as much as possible and you know, it’s just harvesting moments and then taking it back to the kitchen and trying to figure out what the actual dish is,” Waititi said. “You know, we’ve got a plan of making a certain dish and then they could be very different by the time we’ve finished cooking it.”

One of the things that stands out about this movie is the soundtrack and Taika had something to say about that as well.

“We just wanted to spend as much money as we possibly could,” the director joked. “The whole aesthetic around the film was always we wanted it ot be this bombastic, loud, colorful palette which kind of reflected like spray painted panel vans in the 80s and rock album covers and even the title treatment for the film was the kind of thing I would have drawn on my school book in class when I wasn’t listening.”

“It’s been a long journey and we worked really, really hard on this film to make something that audiences will love,” he said. “And after a couple of years of being, you know, stuck at home or, you know, having to go through a lot of hardships, I think it’s really nice to be able to celebrate things like love and thunder, whatever that means in your life, but also just being able to go back to the movies and being able to just laugh and feel like a kid again.”

As for the future of the MCU, Feige let fans know that they won’t have to wait too long to hear about what’s coming next.

“We’ll be at [San Diego] Comic-Con next month, which we’re excited about,” Feige said. “First time since we were on stage there three years ago talking about this movie and many others and now, I think, almost, not everything, but almost everything we discussed three years ago has now been released so yes, we’re excited to go and talk about the future.”

Thor: Love and Thunder comes to theaters on July 8.