The latest film from Pixar Animation Studios, Lightyear, has arrived on Disney+ and Digital versions for home libraries. As such, we get to do something we otherwise could not do on its original theatrical release – hit the pause button looking for easter eggs!

As such, this is a guide to the hidden things found in Lightyear. Obvious references, parodies, or callbacks that the film uses (I.E. Sox plugging into the ship a la R2-D2, or Buzz blowing into the IVAN cartridge like a Nintendo game) will not be mentioned.

Every Pixar feature usually has a checklist of usual easter eggs that are found peppered throughout a film. Lightyear is that rare feature that doesn’t have the complete list of the usual standbys. Take a look. John Ratzenberger, known mostly for his role as Cliff Clavin in the classic television series Cheers, has had a speaking role in every Pixar film up until 2020’s Soul. In that particular instance, his likeness was used in the background of a scene on the subway. Since then, in both Luca and Turning Red, we have not seen or heard from John. Lightyear keeps with the current trend and leaves Ratzenberger out.

We can, however, travel back to an oft-overlooked passing of the torch that once occurred where actor and comedian Bill Hader was to carry on the tradition. Though this was mostly forgotten due to some entries missed due to production issues (See Also: The Good Dinosaur) and scheduling, Bill once again makes an appearance in Lightyear as the bumbling rookie, Featheringhamsten. This adds to his Pixar filmography, building upon his performances in Monsters University, Inside Out, Finding Dory, and most notably for today’s reading, Toy Story 4, where he provided the voice of Axel the Carnie. This makes Hader the only actor from any of the original Toy Story films to appear in Lightyear. Personally, I have yet to find A113 – the number of the CalArts Character Animation classroom that has appeared in every Pixar film in some way or another – in Lightyear, but I am convinced it’s out there. It has to be. Many are saying that it can be found outside Hawthorne’s office but after repeat viewings of that scene alone, I find a bunch of near-misses, with the numbers 114 and 115 present in the A wing of buildings. That stands to reason that offscreen, there is in fact, A113 but I haven’t spotted it with my own eyes.

That said, some fun Pixar numerology is in play in some way. Lightyear marks the sixth time the number 42 appears significantly on screen. Though there is no official backstory like A113 (the CalArts classroom), many fans point to Douglas Adams’ Hitchhiker's Guide to the Galaxy as the root source, where the number served as the “Answer to the Ultimate Question of Life, the Universe, and Everything.” On top of appearing in Finding Nemo, Coco, Cars, Cars 3, and WALL-E, 42 is emblazoned on Izzy Hawthorne’s suit in Lightyear.

Speaking of numbers, a good trivia question one day will be “What was the number of the Turnip?” The answer: S.C.01T.S. – Which reportedly stands for “Star Command Number 1 Toy Story.” 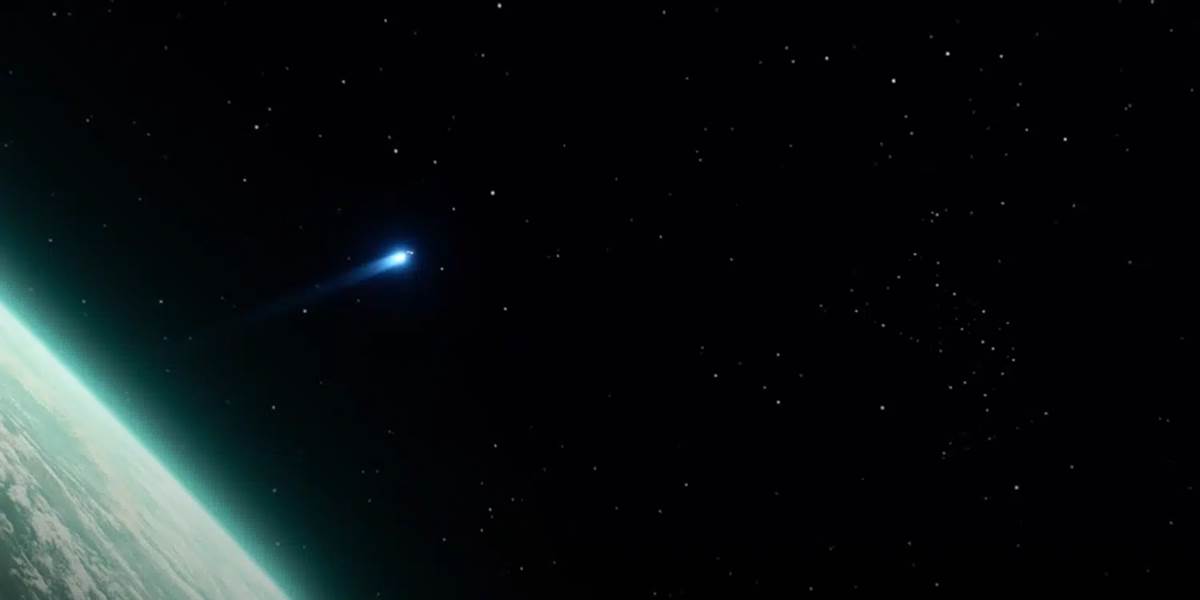 Another infamous easter egg that fans across the internet are scrambling to find is the famous Luxo Ball. The ball has appeared in nearly every Pixar film and has yet to be spotted in Lightyear. However, in the short where the ball made its debut, Luxo Jr., the bouncing lamp that serves as the animation studios’ logo also appears. Perhaps the lamp is taking on the duty for his bouncy friend in Lightyear, as the lamp can be spotted as a constellation in the stars as Buzz attempts to achieve Hyperspeed successfully. 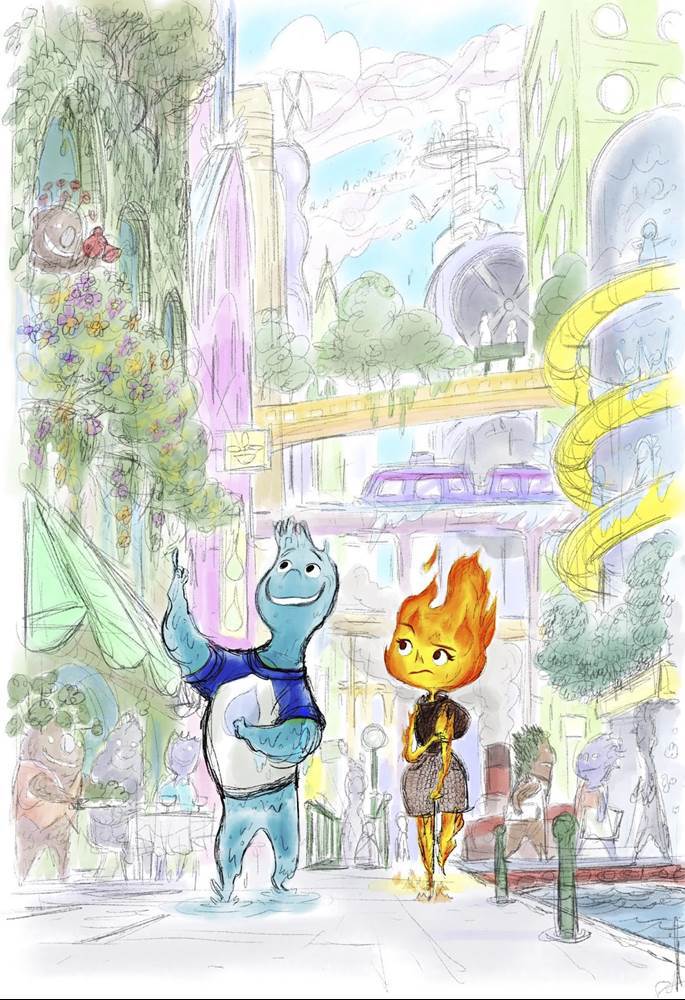 Pixar Animation Studios also has the fantastic tradition of hiding Easter Eggs for their next feature in their current one. An easter egg for Lightyear appeared in Turning Red in the form of stickers on a skateboard with the Star Command logo and scene-stealing SOX the cat. Next up from Pixar is the film Elemental, directed by Peter Sohn (voice of the aforementioned personal companion robotic feline). 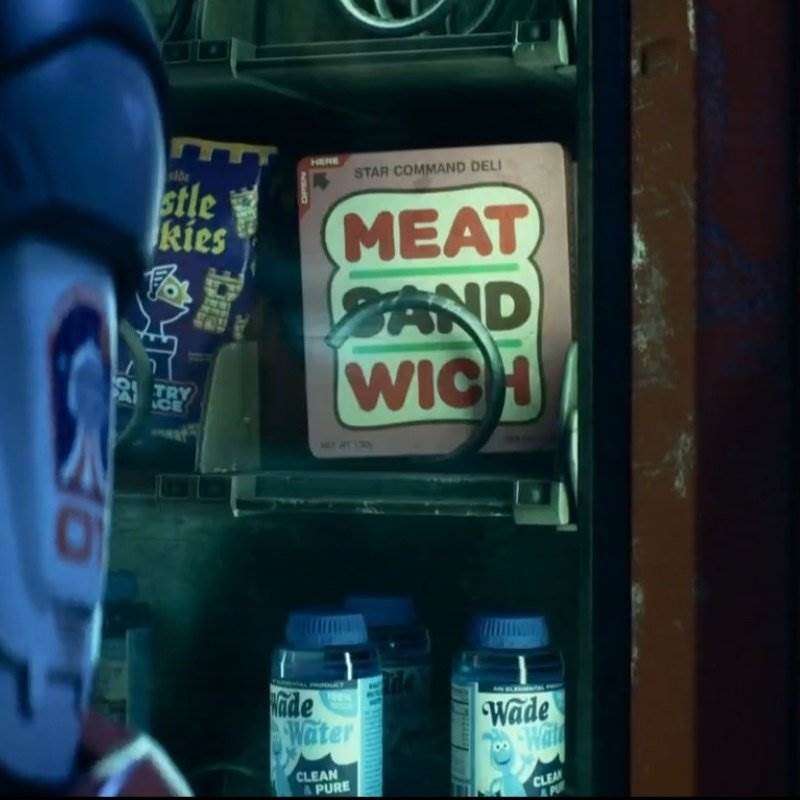 The film journeys alongside an unlikely pair, Ember and Wade, in a city where fire-, water-, land- and air-residents live together. The fiery young woman and the go-with-the-flow guy are about to discover something elemental: how much they actually have in common. In Lightyear, you can find the homage to the next film from the studio in the form of a water bottle in a vending machine, just under the meat sandwich that Moe gets.

Like all the ones listed above, the Pizza Planet truck appears frequently in the Pixar catalog, in some form or another. Though it’s origins trace back to the original Toy Story, it can cause some confusion since this film is an extension of the Toy Story universe, being the film that made Andy want a Buzz Lightyear toy. Nevertheless, the Pizza Planet truck does appear in the film, in the scene when Buzz and Sox are making their getaway to hijack a ship after perfecting the crystallic fusion formula. Look for it on the left hand of the screen, below the Turnip.

The vending machine where the Wade Water was found when Moe was getting his sandwich also offers up a tasty snack featured in the 2020 film, Onward. Look closely and you can spot the castle cakes featured in the film for sale with the other delectables, including some pre-packaged goodies from Poultry Palace, the fast food chain that first appeared in the short, Small Fry, a Toy Story Toon that introduced us to Buzz Lightyear as a kids meal toy desperate to leave his display case at the eatery. Stay tuned through the credits in Lightyear and you’ll be treated to three different scenes. One of them is a funny little gem featuring Commander Burnside in his office. While that may retain your attention, looking at his shelf will serve up a few treats too. On his shelf of accolades, you’ll find a trophy that looks like one of the Pizza Planet aliens, as well as a figure of BURN-E, from the film WALL-E and his own titular short. 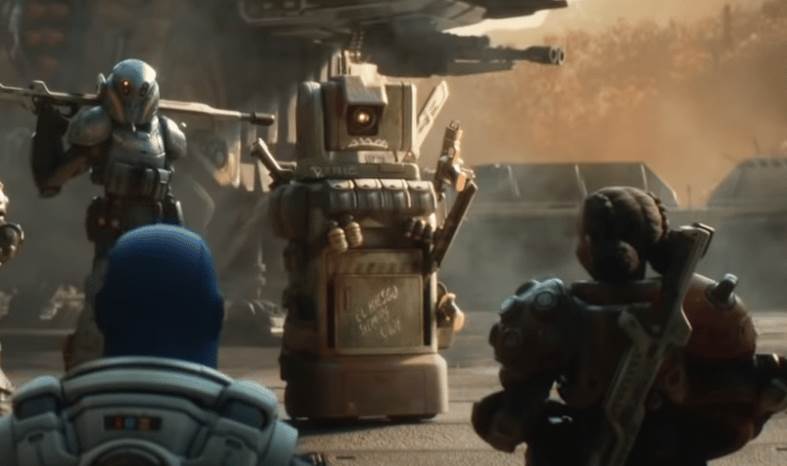 The graffiti across D.E.R.I.C. is never called attention to, but a simple Google search (or knowing fan) knows that this is an homage to another Sci-Fi franchise, calling back to Vasquez in Aliens, who wore the phrase “El Riesgo Siempre Vive” or “The Risk Always Lives” famously on her armor in that film.

One of the best sources of Easter Eggs are scenes where there is a bunch of junk. Heck, the antiques store in Toy Story 4 and the Hall of Everything in Soul are veritable treasure troves of goodies for the eye as they are both made up of whatever models already exist on the Pixar hard drives. Of course, Lightyear doesn’t have quite the archive like that, but some familiar looking models do appear in the background. You can spot some familiar looking canisters from Monsters, Inc. and Monsters University at the station.

Lightyear has been heavily marketed as the definitive origin story of Buzz Lightyear, the hero toy from the iconic Toy Story franchise. A title card at the beginning of the picture also reveals that this was the movie that Andy saw that made him want the toy. As such, with the premise alone, making obvious and even obscure references to the original source material is a given. In fact, a whole separate article can (and should) be written just for these nods to the original four films, so stay tuned! Until then, I’ll just leave you with my personal favorite (subtle?) homage to Toy Story 2, when toy Buzz and his toy friends are making their way across a busy street under the guise of orange traffic cones. Stay tuned for another round up of Lightyear details coming soon!

Lightyear is now streaming on Disney+.