C2E2 is back and Chicago couldn’t be more excited. While last year’s event delivered some fun spotlight panels and appearances featuring Marvel writers, Marvel Comics didn’t host a panel. Fortunately, this year they have a presence once again. To kick things off, Marvel Editor-in-Chief, C.B. Cebulski and a team of writers took the time to talk about their “Secret Origin” story or how they got their jobs at Marvel Comics. 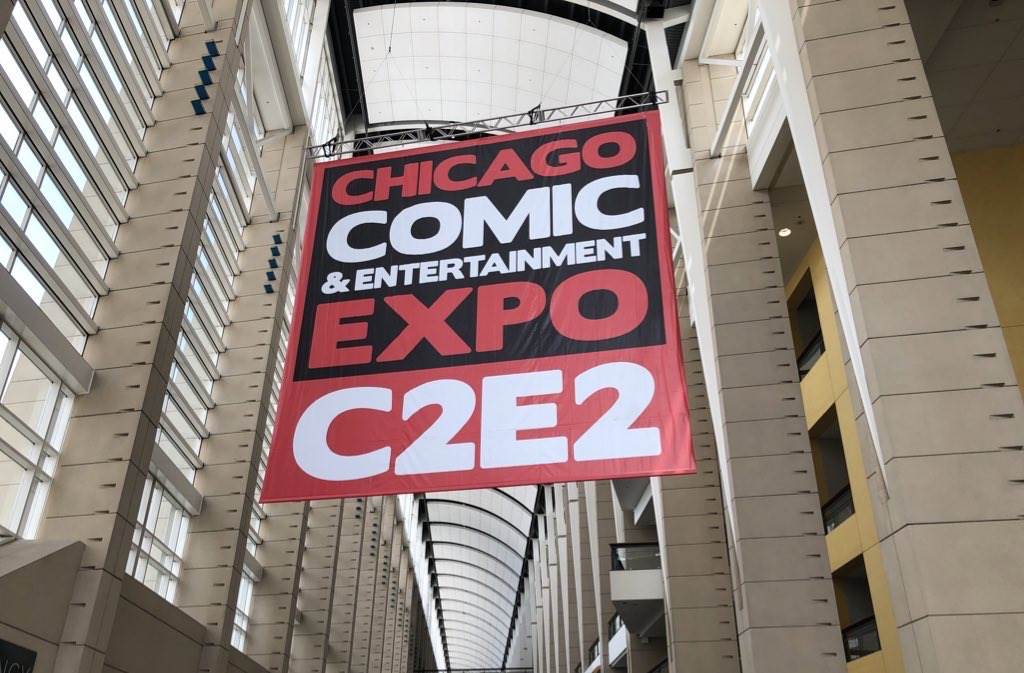 Making Comics the Marvel Way was one of the first panels I attended at C2E2 2022 and while I’m not (currently) interested in working in the comic industry, I can see how this offering would be beneficial to many aspiring creators. The hour-long session was open to all attendees and was a chance for comic fans to get up close with the writers and editors behind the biggest stories in Marvel.

The panel included C.B. Cebulski, Marvel’s Editor-in-Chief; Samira Ahmed, writer; Tim Sealy, artist and writer; Kyle Higgins, writer; and Rickey Purdin, Talent Relations Director. After introductions were made, Cebulski started off by quoting a fellow comic writer who said, “breaking into comics is like breaking out of jail. Once someone finds a way to do it, that way is sealed off and you have to find another way, you have to find your own path in.” He further went on to compare the challenge to that of baseball saying, “Marvel Comics is like the Yankees and you don’t go right from high school baseball to being the starting pitcher or the designated hitter…there’s a path you follow.” 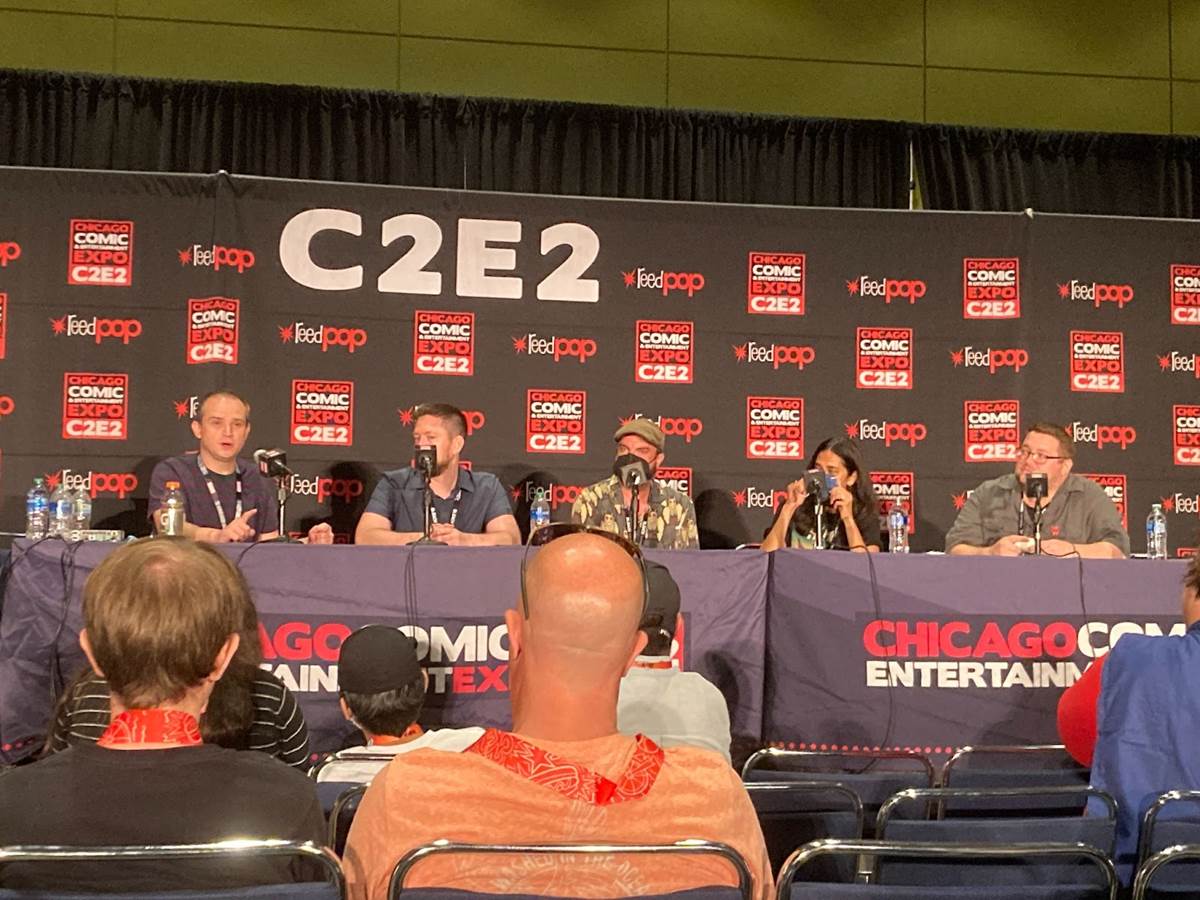 So how exactly does one become a writer, artist, colorist, or editor at Marvel (or other comic publishers)? Well the answers are as original and unique as the people who work for Marvel. Thankfully, this group shared their background and what led them to the entertainment giant.

Secret Origin in Comics – How They Did It

Purdin got his start with an internship at DC and encouraged aspiring creators to be open to other possibilities. While many people will think of writing and illustrating, there are other jobs in comics such as working in marketing, sales, legal and so on.

Higgins says he developed a love of comics and filmmaking though “hero films” like Teenage Mutant Ninja Turtles and the Tim Burton Batman. He initially wanted to be a director and, in college, made a thesis film based on heroes. It was called “The League” and told the story of a super hero Labor Union in 1960s Chicago. As he was working on the project he reached out to illustrator Eric White to design the characters. White agreed and was impressed with the film that he helped to spread the word about the unique project. Marvel’s Joe Quesada was the first person to reach out to Higgins and commented that his “love of super heroes, comics and filmmaking show in every frame.” He eventually got the chance to pitch One Shot ideas and finally, on his twentieth attempt, he got a Captain America story.

Sealy worked as an editorial assistant on Spider-Man, and while he’s artistically talented too, he says drawing makes your back and eyes hurt, but “writing is fun! I like to make things up.” One of his original creations is the horror graphic novel Hack/Slash.

For Ahmed, she never imagined wanting to be a writer, but eventually became a high school English teacher. She says she believes in the power of storytelling, and she too loved telling stories. Best of all her name means storyteller, so it’s no wonder that her debut novel Love Hate and Other Filters was the story inside of her that just had to get out. While books are where she’s hit her stride she told her literary agent that if Marvel ever had an opening….

Cebulski discovered comics as a child and his first book was X-Men #121. He also clearly remembers back in 1978 seeing George Lucas on TV, and his father told him, that’s the man who created Star Wars. It was then that it clicked for him people developed stories and character and he started paying attention to the various comic creator roles. He got his start in Manga and while the genre was growing in the U.S. started seeking out American artists to create variant covers. He even asked Joe Quesada if he wanted to draw a variant cover (to which Quesada apparently said Cebulski couldn’t afford him). When Marvel wanted to dip their toes in the Manga pool, they reached out to Cebulski. He admitted that he had trouble keeping up with deadlines because he always gave his artists the benefit of the doubt when they came to him with excuses. Marvel had a serious talk with him and he agreed that at the time he was a terrible editor. However they thought he was great with talent and artist, so, they created the Talent Management Department for him to run. Presumably, Cebulski eventually improved as an editor given his current title.

Cebulski’s story led into the next section where Pudin asked the panelists if there was a “hard or difficult realization” that forced a pivot, ultimately leading to success.

Sealy was initially afraid to write, his background was in drawing but eventually he ran out of excuses and found himself doing both. He commented that people don’t think they are capable of things they can actually do. We shouldn’t be afraid to try everything. Creators may discover they actually have a knack for something they never envisioned for themselves.

Higgins said he’d paused a short film he’d been working on, but continued to think about it. When inspiration hits hims. he’s always looking for a way to do those things even if “someday” isn’t right now. As for introducing new superheroes to the fold he encourages that the characters be good and different from what’s come before. He further went on to talk about writer's block, and how an editor told him “it’s not a block, it’s laze.” He offered that if creators feel they’re getting stuck a lot of time it’s because they have taste. We naturally want to compare work to the things we love, things that inspire us.

Sealy added to Higgnis’ comment about writer's block, “you know it’s not right.” Creators develop a ‘Crapsense’ which just means they get better at sensing crap!

Ahmed was 40 when her first novel was published and believes there is no expiration date on dreams. She encouraged the audience to say yes to themselves. It’s true the biggest risk is failure, but that also leads to another chance to try something. Yes, you do need to develop a thick skin because there will be rejection, but don’t forget there are people who will champion for you. When she told a friend about her book ideas that person told her “you have a voice.”

As the panel came to a close, audience members were given the chance to ask questions, a customary part of the C2E2 convention. The first person asked about what’s acceptable when it comes to being persistent. Higgins said you learn to tell when people still want or need something from you…and you also have to figure out a way to stay on the radar. Cebulski explained the differences between professional and pain in the butt persistence and noted that sometimes you just wind up in the right place, at the right time. Think of things as fishing and not hunting. It might take some time, but if you’re patient the right thing will come along.

They also encouraged the audience to target the publishers who have books, stories and values they like and respect. Cebluski said not to be afraid to reach out to other creators, not just the people you want to work for as word of mouth can be a huge help. Additionally, assistant editors are often heavily involved in the entire comic process and are often trying to build their own portfolios. They’re hungry to prove themselves too.