As if Ashley Eckstein ever needed to prove her fandom to an audience of diehard Disney fans, the Her Universe founder introduced herself as the moderator of “A Very 90s Afternoon Special with the ‘All-New’ Mickey Mouse Club” by showing a photo of herself as an eight-year-old wearing a t-shirt from the show. Held in the Walt Disney Archives Stage at the D23 Expo on September 9th, 2022, Ashley reminisced about attending a live taping of the show, which she credits with opening her eyes to the fact that what these talented kids were doing on TV every week was something she could do, too. It sparked her dream of not only becoming an actress but appearing on Disney Channel, one she’s seen come true several times over. She also shared that her neighbor growing up worked as a camera operator on the show and gifted her an autographed t-shirt, which she brought along to share with the cast backstage. 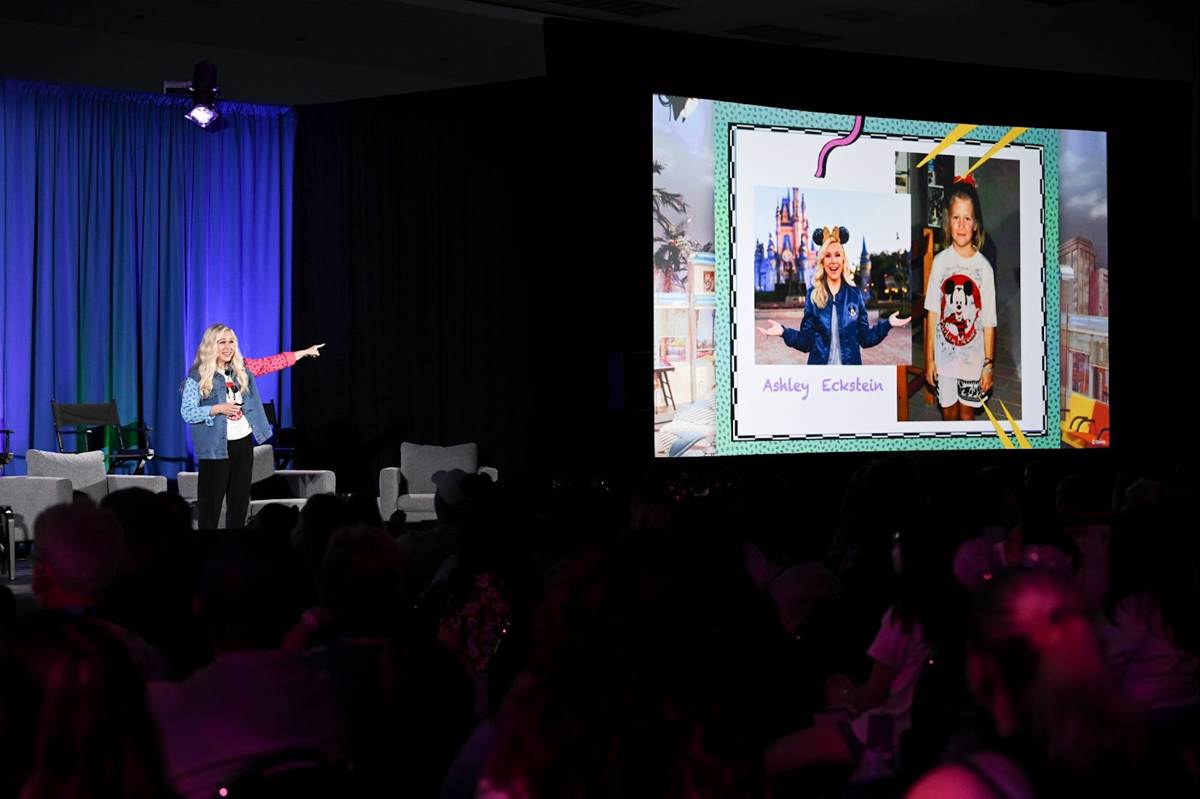 The All-New Mickey Mouse Club was not the project Chase was originally hired for, revealing that he was to play  Lonnie Burr in a film called “Why, Because We Like You,” a biography about the original Mickey Mouse Club. When the Hollywood writers' strike of 1988 shut down production, it just so happened that Disney had a brand-new theme park in Orlando that was also a working studio in need of productions. Making lemonade out of lemons, Chase soon found himself playing himself in a revival of the show rather than a film about it. But he did still get to meet one of the most famous original Mouseketeers, Annette Funicello, who helped introduce the cast at a press conference. Chase knew Mylin from growing up in Oklahoma and knew her talent. As he was leaving the show to tour with The Party, he recommended Mylin to the show’s casting director.

Chase also got to perform at the Disneyland 35th Anniversary event along with several of the Mouseketeers. The televised event was an attempt to recreate the opening day broadcast and included sitting president Ronald Reagan, who was one of the hosts of the original broadcast. He recalls being whisked onto the train and found himself inside an enclosed car (the Lilly Belle) surrounded by secret service agents. Lindsey can laugh now, but at the time of her audition, Barry Manilow’s “One Voice” seemed like a great fit for a teenage girl to sing. She remembers asking them to fast-forward the cassette tape to the big finish. She made it through six auditions over the course of a year and later got to perform the song on the show. Lindsey was one of just three cast members to stay with the show for its entire run.

Tony never intended to audition for the show. He played guitar in a garage band in Detroit and got a call offering the opportunity to audition for Newsies. However, when he got to the local audition, the casting team didn’t have him on the schedule and suggested he check down the hall. Through a mix-up, his audition was scheduled for The All-New Mickey Mouse Club. But as luck would have it, he nailed it. One of his favorite parts of the onboarding experience was a shopping spree to The Florida Mall with the show’s stylists, who wanted each member to showcase their unique personality through their clothes. Tony remembers getting a lot of items at the now-defunct Chess King.

The Walt Disney World Resort wasn’t just where they worked, it was also where they played. Albert reminisced about hanging out at Videopolis East, a Pleasure Island dance club for teens that was a favorite hangout spot for the cast. They would often have dance-offs with the local regulars. Chase reminisced about meeting his future wife at a taping of the show and taking her to Videopolis East on their first date. That location was mostly destroyed when Downtown Disney became Disney Springs, but he still likes to visit that area with his wife on family vacations. DeeDee still remembers their schedule. School was from 9:00 am to 12:00 pm, after which they would either rehearse or film until 6:30 pm. Weeks were dedicated to either rehearsals or filming. During school hours, she was notorious for taking long “bathroom breaks,” secretly sneaking away to ride The Great Movie Ride. Marc looks back in awe at the fact that the person managing their school was working with each cast member’s school district curriculum. Lindsey recalls being so disappointed that she was missing frog dissections in biology that she brought one to school. All of her fellow Mouseketeers left the classroom.

The show included some big guest stars from the very beginning, with New Kids on the Block appearing in the pilot shortly before their big break. The boy band later came back to Disney-MGM Studios to film a concert special on the backlot, which DeeDee and Mylin snuck into. Mylin also recalls a time when the Mouseketeers were called backstage during a shoot and surprised with Michael Jackson, who was secretly in the audience for that episode. Tony was a huge fan of Brian McKnight and he begged the producers to reach out to him. When he did guest star, Tony recalls his awkward introduction in the star’s dressing room, and checking the soundcheck schedule to make sure he was around when Brian arrived. Chase also joked about Milli Vanilli’s guest performance and how the director secretly recorded their microphones when rumors were swirling that the voices emerging from the duo may not be their own. But for Marc, it was being chosen to visit Annette in California to honor the original Mouseketeer for her birthday that stands out as a highlight. He was in awe of her pool table, which was a gift to her from Fats Domino, one of the pioneers of rock and roll.

Music would take several of the original members of The All-New Mickey Mouse Club away from the show, with Albert, Chase, and DeeDee joining Tiffini Hale and Damon Pampolina in the pop group The Party, the first band signed to Disney’s Hollywood Records. While they would occasionally return to guest star on the show through the end of its run, the band’s popularity kept them busy through three albums and world tours. More Mouseketeers were given the chance to record songs on the MMC album in 1993, including Tony. He looks back on it as a bittersweet memory because unlike The Party, only a handful of Mousekteers got to go out on tour to promote the album. Rhona Bennett (season 4-7) couldn’t join the panel because she’s on tour with En Vogue, but she sent along a video greeting to her fellow Mouseketeers and the audience of fans. Wrapping up the panel, the cast talked about the opportunities the show created for them. From Daniel and DeeDee starring in Sister Act 2 to Lindsey’s one-woman-show inspired by these years, their experience on The ‘All New’ Mickey Mouse Club has continued to enrich their lives. But most of all, they found friendship and a second family together. And now, as this recap comes to a close, it’s time to say goodbye.

Photos and videos weren’t allowed during the panel, with the exception of the very end. The cast got together with Ashley Eckstein and recreated the show’s signature farewell.