“I think I'm a little elderly for a franchise at this point, but I'll take what I can get,” laughed legendary singer, actor, comedian, author, and activist Bette Midler during a press conference for Hocus Pocus 2, the long-awaited sequel to the 29-year-old Halloween classic. The original film wasn’t a success when released in 1993, but through repeated TV airings on ABC Family (now Freeform), it gained an ever-growing following. “This was kind of a dream come true, it really was. After I realized it was actually a phenomenon, I started asking people around my age, don't you think they would be interested in a sequel? This was a long time ago. This was like 15 years ago, something like that. So here we are.” 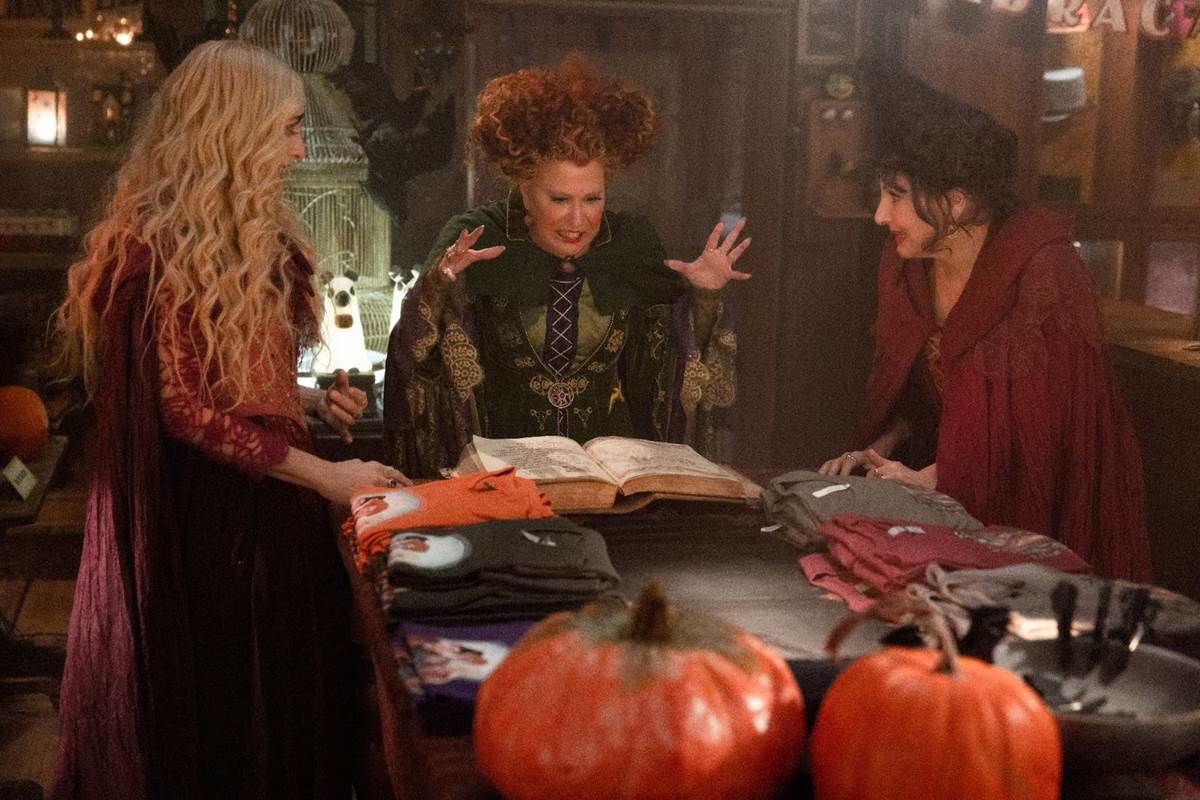 Hocus Pocus 2 launched globally on September 30th on Disney+, and today it was revealed that it was the most streamed original movie launch in the platform’s history to date. “This is like my fourth or fifth project with Anne,” Mary Sanderson herself, Kathy Najimy, said about her relationship with director Anne Fletcher. “She was one of the hugest reasons that we got through this thing. She is just one of the best people, one of the best directors, and one of the best artists ever in the world.”

Like Kenny Ortega before her, Anne Fletcher’s entry into film came as a choreographer, which led to opportunities as a director on films like 27 Dresses and The Proposal. “I didn't feel like I could compete with ‘I Put a Spell on You’”, the director said of the hit musical number from the first film. Bette Midler and Marc Shaiman altered the lyrics and arrangement of the Jalacy "Screamin' Jay" Hawkins classic in the first film, a collaboration that resumed on two songs in the sequel. “We just had so many fun options of songs to choose from,” Anne said of the inclusion of witchified versions of Elton John’s “The Bitch is Back” and Blondie’s “One Way Or Another.” “Who doesn't want to see Bette Midler sing?”

“We had to start from scratch,” Anne Fletcher said of the witch’s costumes from the original film, which endured wear-and-tear during production on the first film and have been routinely displayed in exhibits over the past three decades. Costume designer Sal Perez was brought in and given the unenviable task of literally bringing the Sanderson Sisters back to life through their wardrobe. “The symbols on all three of the witches' outfits, especially Bette's, mean something. It actually comes from what is now modern-day Wicca. But in the 1600s, that version of witchcraft, which was tethered to the earth, the ocean, the stars, it's all tied together. And it's all on her, on her cloak as well as the bird, which I won't say any more. But we do understand who the bird is. It's all reflected in Winifred's cloak and in Mary's rings. She also has it. And the three girls also have, the three witches, they also have these symbols as well as each witch's color stone in their matching necklace. Sal was amazing. Amazing costumes. And Hannah Waddingham, the mother witch, has a lot of the iconography of the movie.”

The Sanderson Sisters are brought back to life with the assistance of a new character named Gilbert, who now runs a magic shop out of the old Sanderson museum. “I've been a fan of movie since it was in theaters,” Sam Richardson gushed, who reunited with two of his Veep costars on the film, Tony Hale and Kathy Najimy. He and Anne Fletcher also bonded over their shared experience of growing up in Detroit. “Halloween is a big part of Detroit, Michigan 'cause like, we're a very fall place with fall colors and apple cider. It's all part of it, you know what I mean?” In short, it wasn’t a stretch for Sam Richardson to play a character who, as a child, saw the Sanderson Sisters in flight in 1993 and became obsessed with seeing them return. Ann Fletcher shared her surprise that Sam signed onto the film without aking to meet her, an unusual act in Hollywood. He was simply too big of a Hocus Pocus fan to turn down the opportunity to be on screen with the Sanderson Sisters.

Hocus Pocus 2 also introduces a new trio of teenagers to face off against the Sanderson Sisters, who form somewhat of a sisterhood themselves. “There is an interesting parallel between the older witches and the three of us,” shared Whitney Peak who plays Becca, a fan of witchcraft whose birthday is October 31st. “[They’re from] three completely different walks of life and personality and individuality and then find this bond where you can be selfless and completely comfortable with each other.” The costume design for the three characters also mirrors the Sanderson Sisters, with Becca becoming the group’s de facto leader clad in hues of green like Winifred. Izzy is her loyal companion in hues of red like Mary. “I just admire that she has blind loyalty to these girls, will do anything for them, no questions asked, totally would go against three evil witches like for you,” added Belissa Escobedo about her character. And in shades of purple is Cassie, whose time is consumed by her boyfriend and who isn’t as aware of her surroundings as she should be, like Sarah. “Cassie was a lot of fun,” gushed Lilia Buckingham about her first major film role. “We have this love for each other and this friendship, but every teen knows what it's like to go through a rough patch with your friends, and to have your first boyfriend or girlfriend and then do all of that and kind of figure it out. I think she is a very good example of misstepping and not being able to figure it out until she communicates with her best friends.” 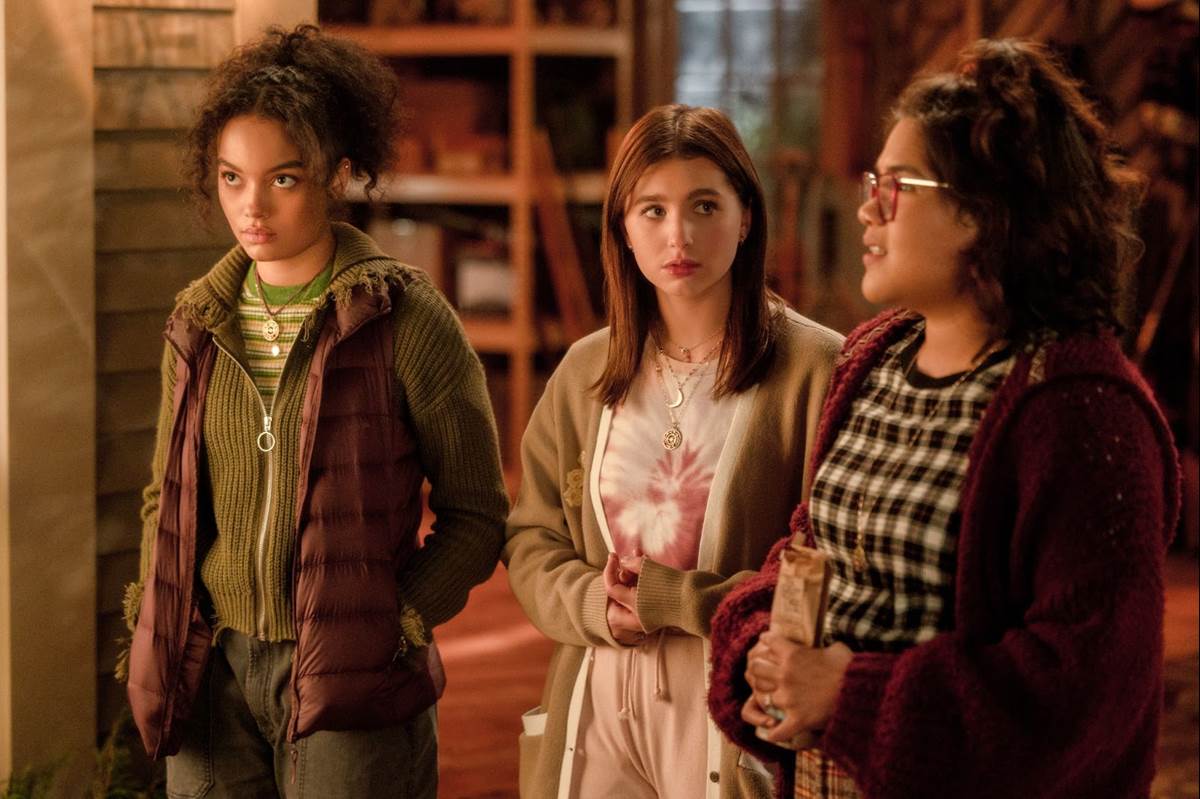 Executive Producer Adam Shankman was a choreographer in Hollywood back in 1993 when the original film was made, but he has a fun connection to it. “I was actually privileged enough in a very weird way to come and visit the set of the original Hocus Pocus,” Adam revealed. “It was amazing. I had no idea what was going on, but it was incredibly magical at the time. And then when I got to be asked to be a part of any of this, I was just like, yes, please. But a lot of it had to do with, can I just please do something with my friends?” Adam Shankman’s working relationship with Anne Fletcher, another choreographer-turned-director, goes back decades as well, with Ann working as a dancer on The Flintstones in 1994, which Adam choreographed, and their partnership extending to projects that include Hairspray, The Wedding Planner, and The Pacifier. “You make new friends and new pods in every project that you do, hopefully. This time, this period of our lives has been incredibly isolating. And I hadn't gotten to see people I know and love in a really long time. And so to be able to have the opportunity to be forced together was really, really special to me.” Adam Shankman’s next project is another Disney+ sequel, the long-awaited return of Amy Adams as Giselle from Enchanted in the appropriately titled Disenchanted.

“I was a zombie before zombies were cool,” bragged Doug Jones, the only other returning actor from the original film outside of the Sanderson Sisters, who reprises his role as Billy Butcherson. “It was only two hours a day,” he shared of getting into costume each day. “Prosthetic pieces are made ahead of time, so getting them on me is the last step. And I got to hide behind a layer of rubber.” Prosthetics may have disguised the three decades that bridge the gap between films for Doug, but he shared that he felt the difference in time while reprising the physically demanding role. “I was 32 when I played him the first time. I was 61 playing him the second time, big difference. My first scene in the movie was stumbling up a staircase into a doorway. I'm like, I don't remember it being this tiring before. But Billy came back. When I looked at myself in the mirror and thought, oh my gosh, two minutes have passed in the last 29 years. He came back right away, voice and everything. I don't know how that happened, but it was kind of magical.” 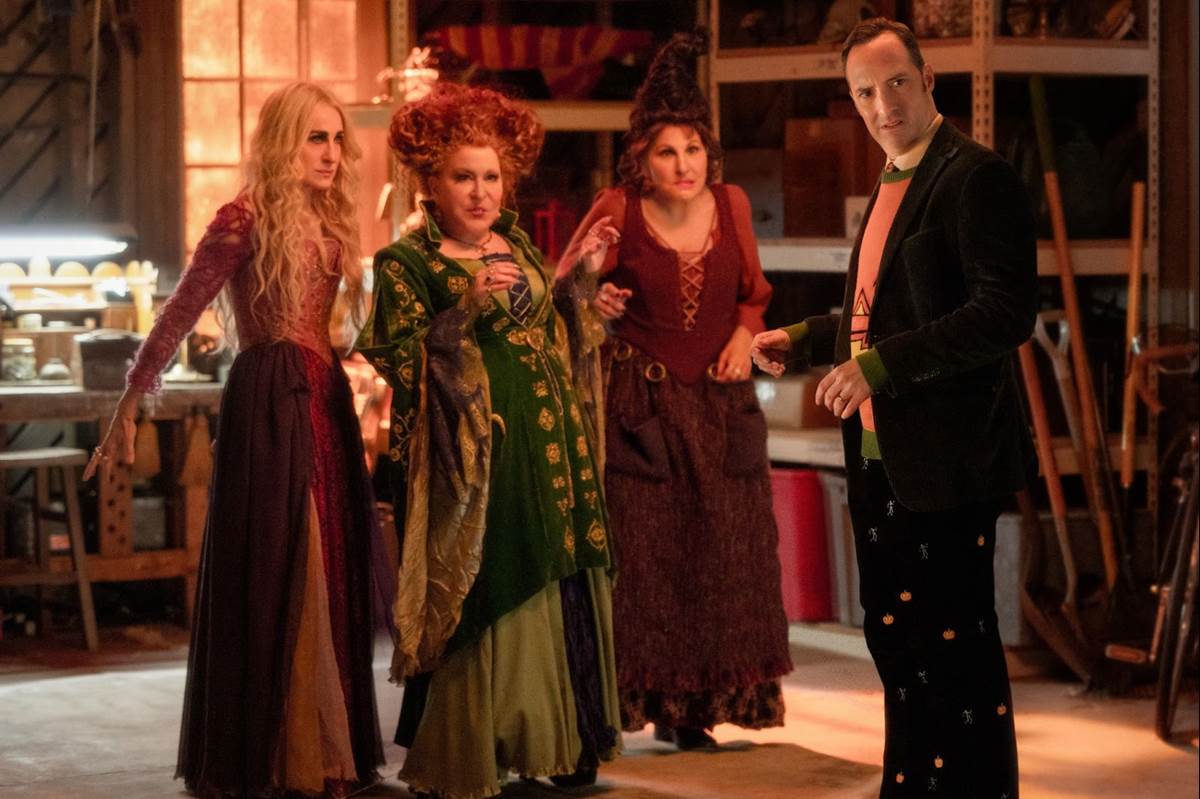 Magical, indeed. In fact, everything about the delayed success of Hocus Pocus has been magical for the stars, and Bette Midler has her own feelings on why that is. “Until maybe the last 25, 30, maybe 50 years, things have changed for women, but things have not changed fast enough,” Midler explained. “I think these three characters are really, in a  strange and odd way, quite positive for women. First of all, they're very funny, which women are not allowed to be, or are not supposed to be. And they're intensely loyal to each other, even though their relationships are… It's a very broad range of emotions that they live through. But in a funny way, their bond is very, very strong. So in any situation where women are together, a bond of friendship and sisterhood is really, really important. And then this movie sort of  shores it up.”

You can see the Sanderson Sisters reprise their strong sisterhood in Hocus Pocus 2, now streaming on Disney+. And if you’ve already seen it, you can experience it again with new eyes now that you know some of the behind-the-scenes secrets.