It may feel like winter is here, but it technically doesn’t begin until December 21st. In celebration of Mickey Mouse’s 94th birthday, Disney+ released the fourth seasonal special from The Wonderful World of Mickey Mouse, this final one titled The Wonderful Autumn of Mickey Mouse. The winter and spring specials each consisted of three shorts, while the summer special was one event experience from each character’s point of view. This fourth special, however, takes a more traditional approach with a full 21-minute story. As always, this recap will point out some of the fun Easter Eggs peppered throughout the special. The leaves are falling, singing and dancing like synchronized swimmers in a Busby Berkeley musical number. Mickey’s red car drives through a pile of leaves and we discover that he is heading to claim an inheritance from a relative named Culpepper J. Mouse. Minnie, Donald, Daisy, and Goofy have all joined him for the trip and as they sing about the season, Goofy mentions that it’s sweater weather. He puts on the sweater from the short “Couples Sweater.” They drive into the quaint town of Pumpkin Ridge, which is holding its annual Harvest Festival. Among the goings on are people playing cornhole, an accordion parade, and apple bobbing (Ichabod is bobbing for apples while Tilda encourages him – both characters from the Sleepy Hollow segment of The Adventures of Ichabod and Mr. Toad). 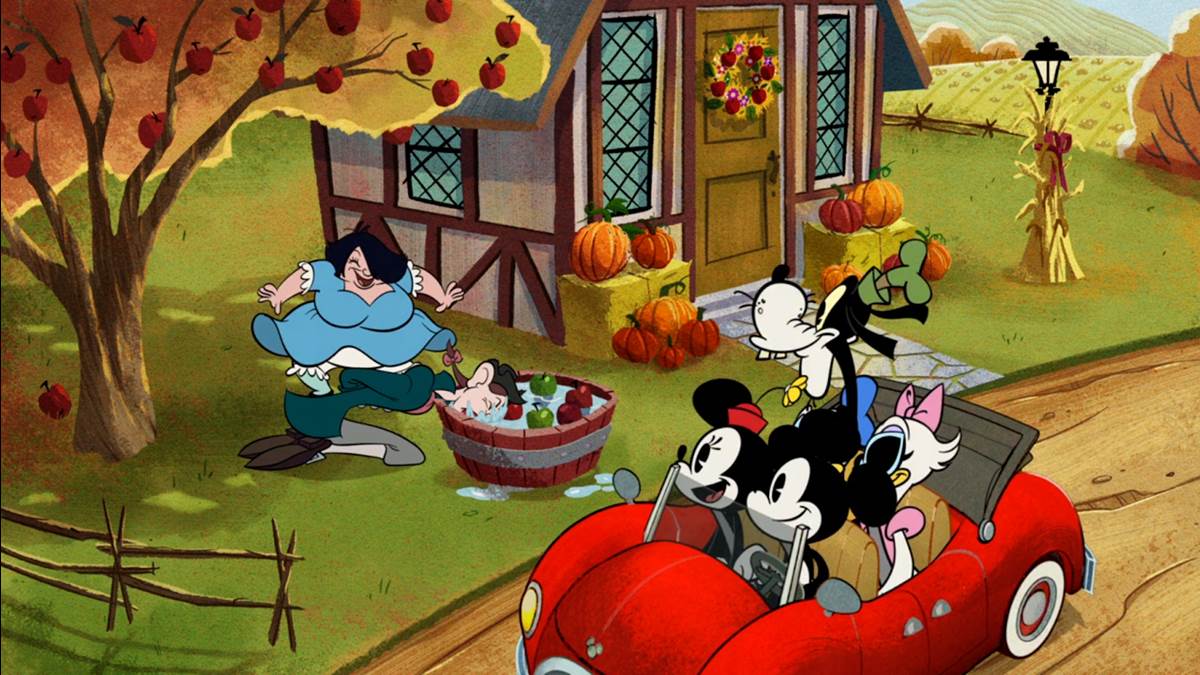 Pumpkin Ridge contains a familiar-looking building – Sleepy Hollow Refreshments from Magic Kingdom, which was modeled after the home of Washington Irving, who wrote The Legend of Sleepy Hollow. Minnie is enchanted by the festival, asking Mickey to stop so she can finally try maple syrup direct from the source. It is revealed that the concept of store-bought syrup really upsets Daisy Duck. They visit two syrup stands, both of which prove to be disgusting, run by a skunk and a fly. 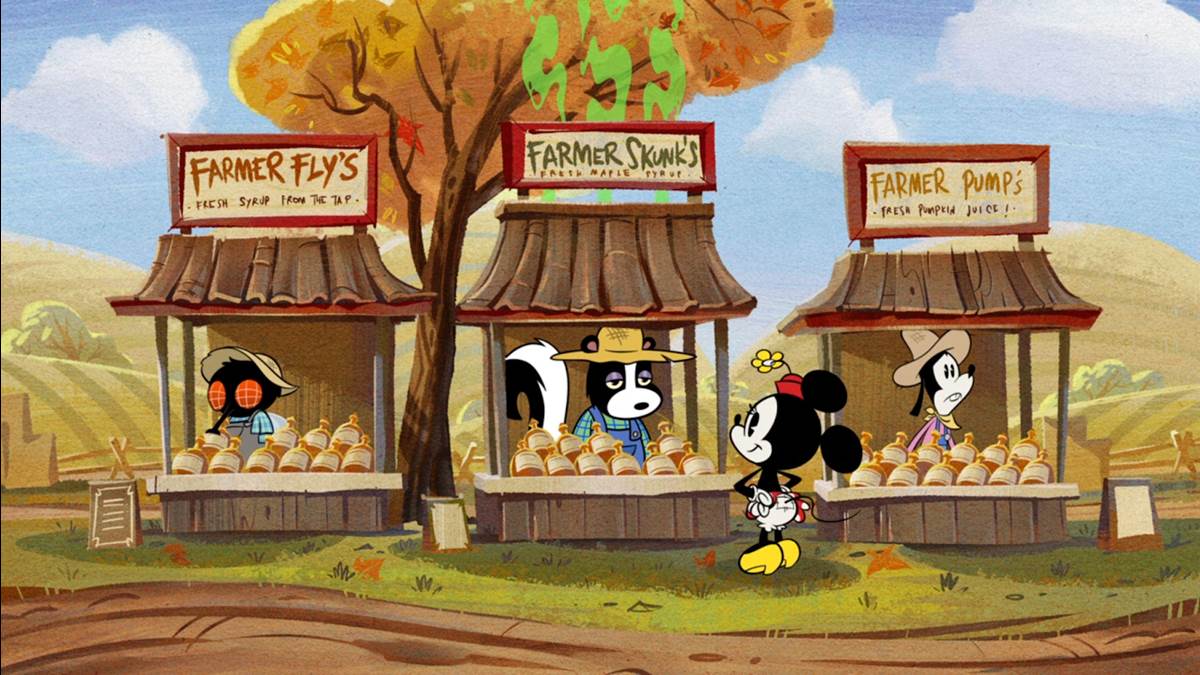 Donald and Goofy are excited about the Pumpkin Growing Contest. Donald is eager to win the cash prize of $200, while Goofy wants to eat the biggest pumpkin and begins snacking on gourds. The leader of the Harvest Festival turns out to be Ranger J. Audubon Woodlore from the Humphrey the Bear shorts.

During the annual play to kick off the festival, Woodlore sings a new variation of “The Humphry Hop” (from the short “In the Bag”), with two bears joining Humphrey in telling the story of a mouse (played by Humphry in Mickey ears) who is terrible at farming. 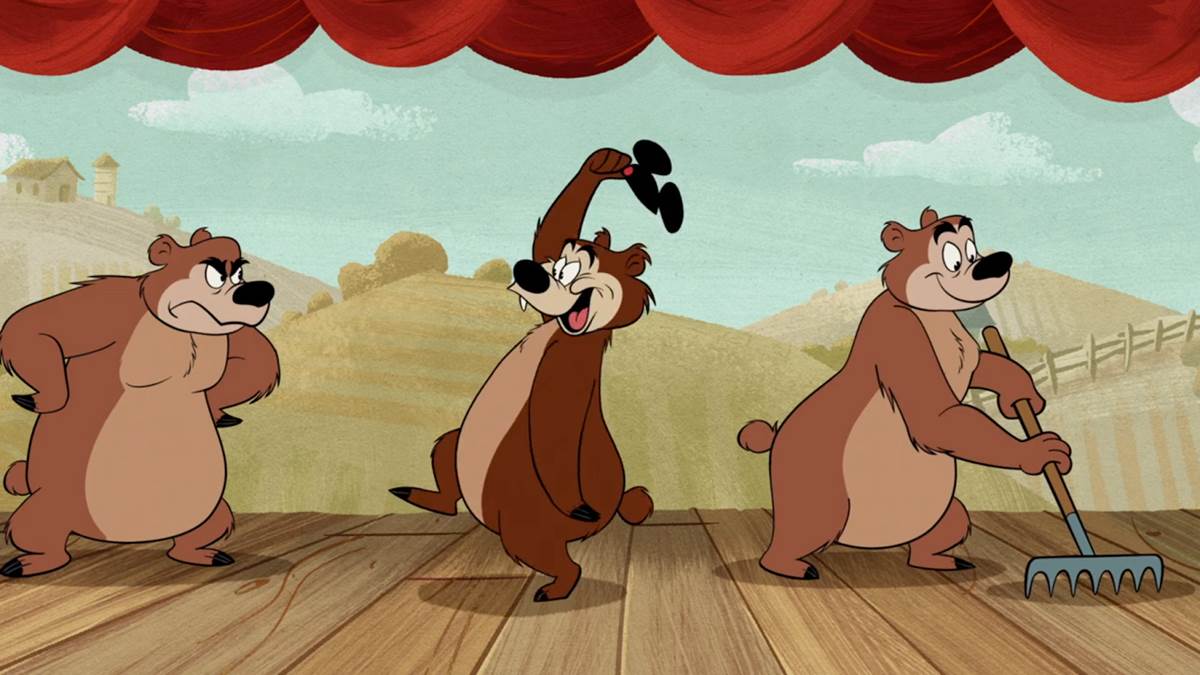 Mickey soon learns that his ancestor, Culpepper Mouse, is considered the “Worst Farmer Ever” as Ranger Woodlore unveils a statue of his deceased ancestor. Mickey tries to back away quietly, but Goofy (between bites of gourd) hollers that it’s Mickey’s ancestor. All eyes turn to Mickey and Ranger Woodlore asks if he’s there to redeem his family’s legacy. 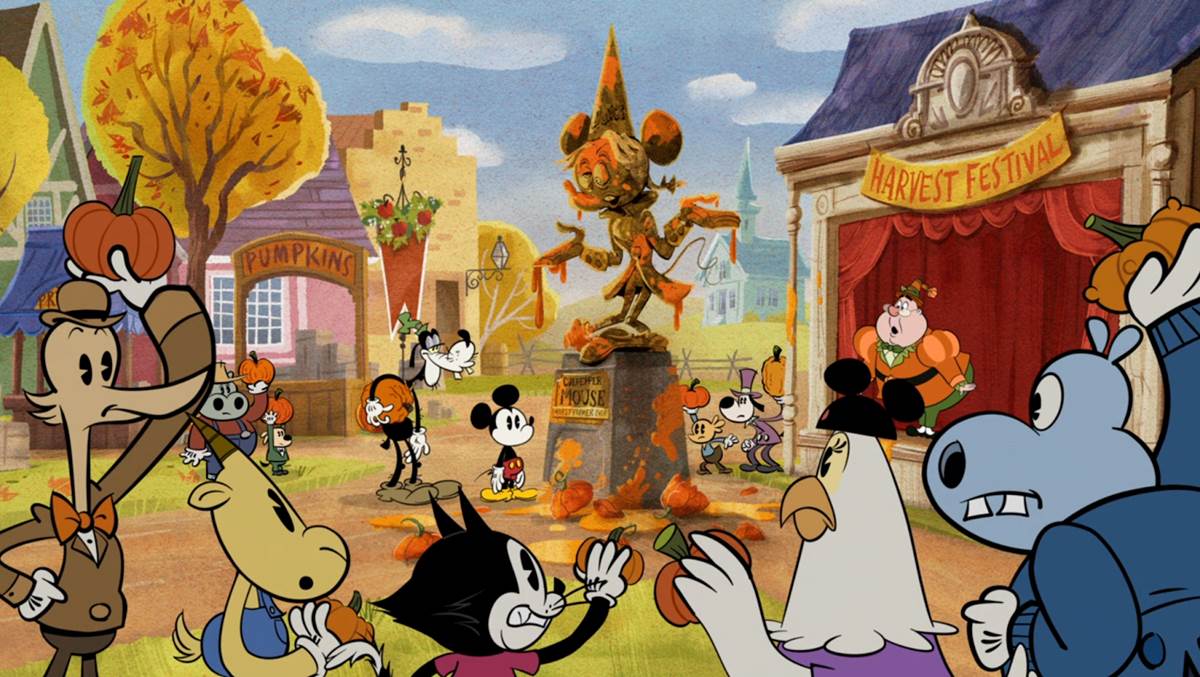 Mickey panics as he drives his pals up to the farm he inherited on top of a hill overlooking the town. The land seems barren and dead and the house is falling apart. Inside, Mickey stands on a carpet that features the same wallpaper design from The Haunted Mansion as he looks up at Culpepper’s family portrait. The family’s bad luck strikes Mickey, literally, as the portrait falls on his head. In the portrait, Culpepper was wearing a dunce cap. Mickey gets a goose egg that looks just like one. Mickey’s friends lift his spirits back up and he says he’s determined to grow the biggest pumpkin the town has ever seen. Likewise, Minnie wants to make the best maple syrup they’ve ever tasted. When Mickey says they will need a miracle to achieve these dreams, Donald pulls out a green bottle of miracle hair growth tonic and says he has one. To demonstrate, he drinks it and suddenly grows a head of flowing blonde hair. Goofy grabs the bottle, sniffs it, and has a similar effect out of his nostrils. 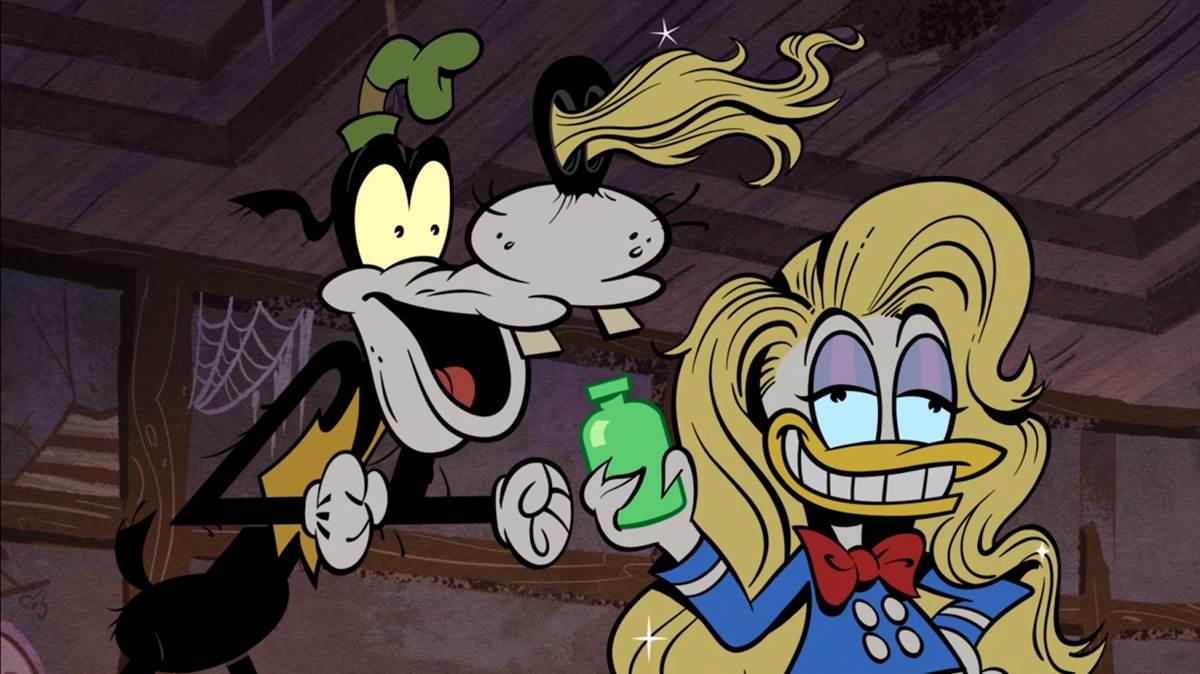 Mickey agrees to use a little of the tonic, but he doesn’t want to cheat. Cut to Mickey and Goofy using farm tools to work the land. Donald fills a barrel with many bottles of his miracle growth tonic, adding in fertilizer, whey protein, and fuel. 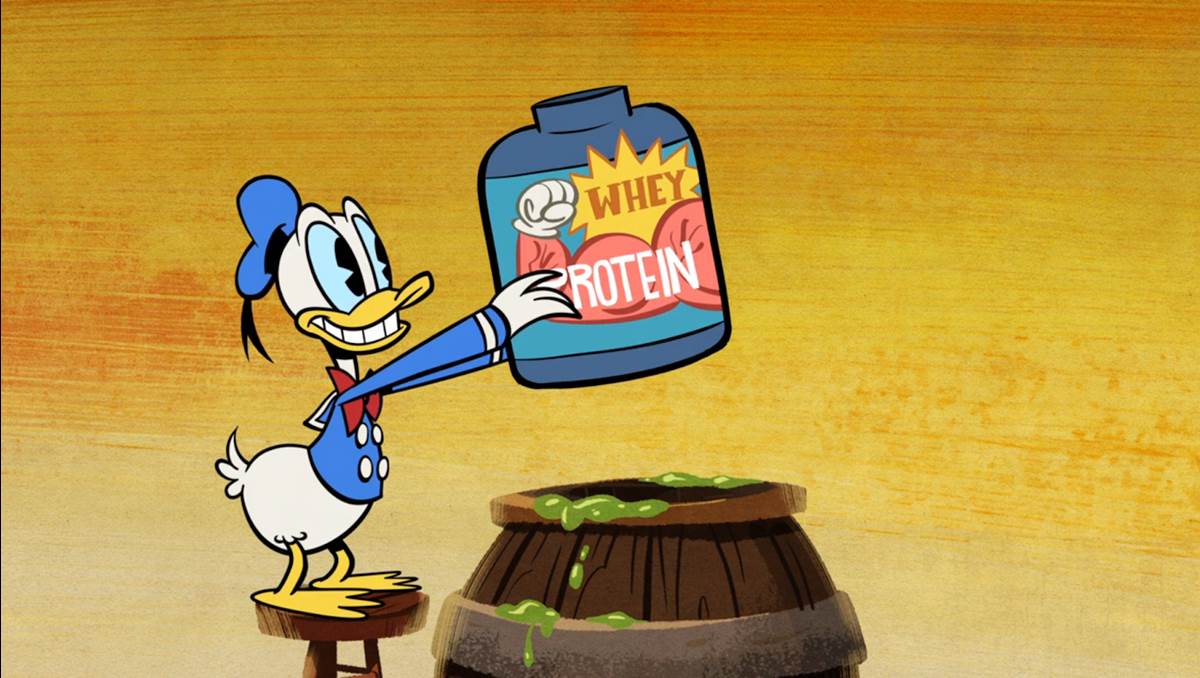 Minnie and Daisy go into the forest and begin tapping the trees. Forest friends from Snow White and the Seven Dwarfs emerge to drink some of the sweet sap. At the end of a hard day’s work, the gang relaxes on the front porch before going to sleep. 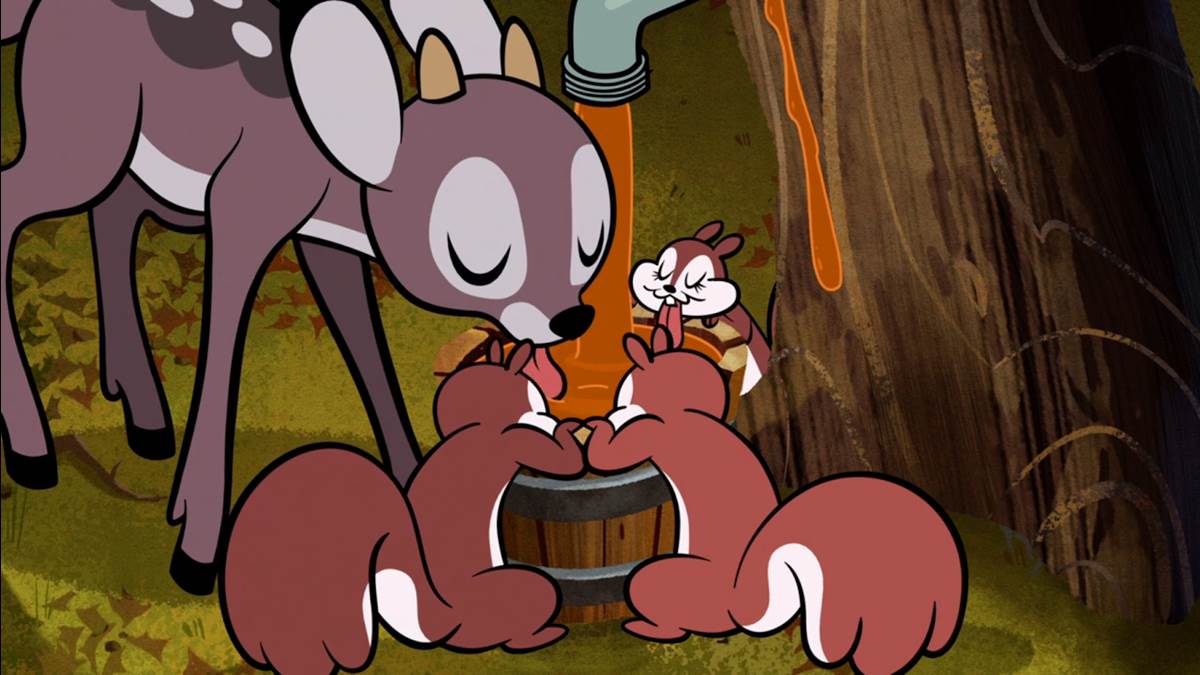 During the night, Mickey has a nightmare that pumpkins grow, but then turn to dust. One of the pumpkins transforms into Ranger Woodlore’s face, saying “Looks like you moused it up again.” Mickey is given a dunce cap and the whole town laughs at him. Waking from his nightmare, Mickey sneaks outside to add a little more of the mixed-up formula to the land. What he doesn’t see is that every time he goes back inside, Donald sneaks out to do the same thing. And when Donald isn’t out there, Goofy does it, too! Meanwhile, Minnie and Daisy both sneak into the woods, unbeknownst to each other, and start adding taps to the biggest tree. 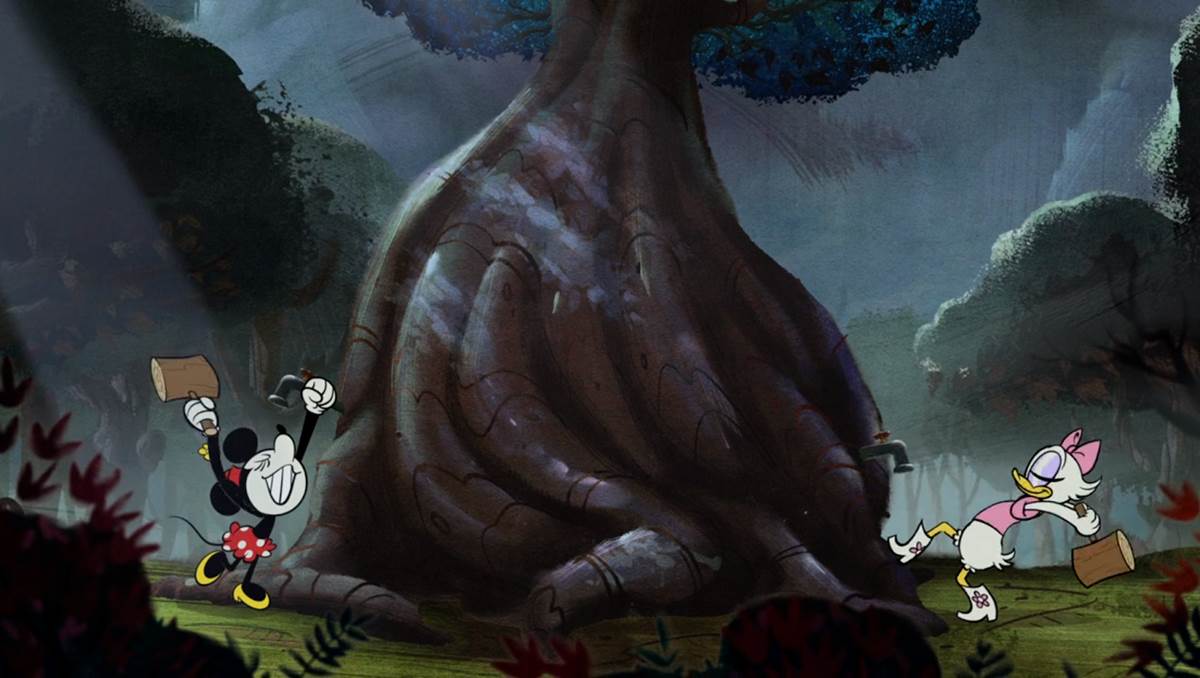 In the morning, the gang feels defeated when nothing has grown out of the ground. Mickey falls to the floor in despair as a sprout pop up before his eyes, It grows fast, curling above his head and dropping a small pumpkin on him. Suddenly, pumpkins begin to rapidly pop out of the ground, and their vines overtake the screen. The pumpkin in Mickey’s hand grows eyes and a mouth and its vines begin to strangle him. All of the pumpkins come to life, surrounding Mickey, Donald, and Goofy. Goofy tries to eat one hole, but it escapes his stomach and knocks over the rest of the barrel of green tonic, which quickly spreads throughout the farm. A giant sentient pumpkin rises up out of the glowing ground. In the woods, Minnie and Daisy arrive at the giant tree, which now has a moat of syrup around it. They try to stop the heavy flow of syrup by any means necessary, even grabbing some of the forest animals to clog the spouts. When they think they’ve finally stopped it, the giant tree explodes, sending them running from a tidal wave of maple syrup. They outrun it to the farmhouse, opening the door and filling up the mansion, slamming the door shut once all the syrup is inside. The giant pumpkin has picked up Mickey, Donald, and Goofy. It’s about to eat them when it hears Ranger Woodlore in the town below starting the second day of the Harvest Festival. The giant pumpkin drops Mickey and his pals and heads into town, scooping up Humphrey and his bears and swallowing them whole. Mickey regrets not clearing his family’s name, Donald is sad he didn’t grow the biggest pumpkin, and Goofy wishes he could’ve eaten something as big as that giant pumpkin. This gives Mickey an idea, who pours the last drops of the green goo onto himself to make him bigger. “Wow, I’m a big boy,” Mickey explains as he stomps into town. Horace Horsecollar and Clarabelle Cow run away as Ichabod shouts “We’re all going to die!” 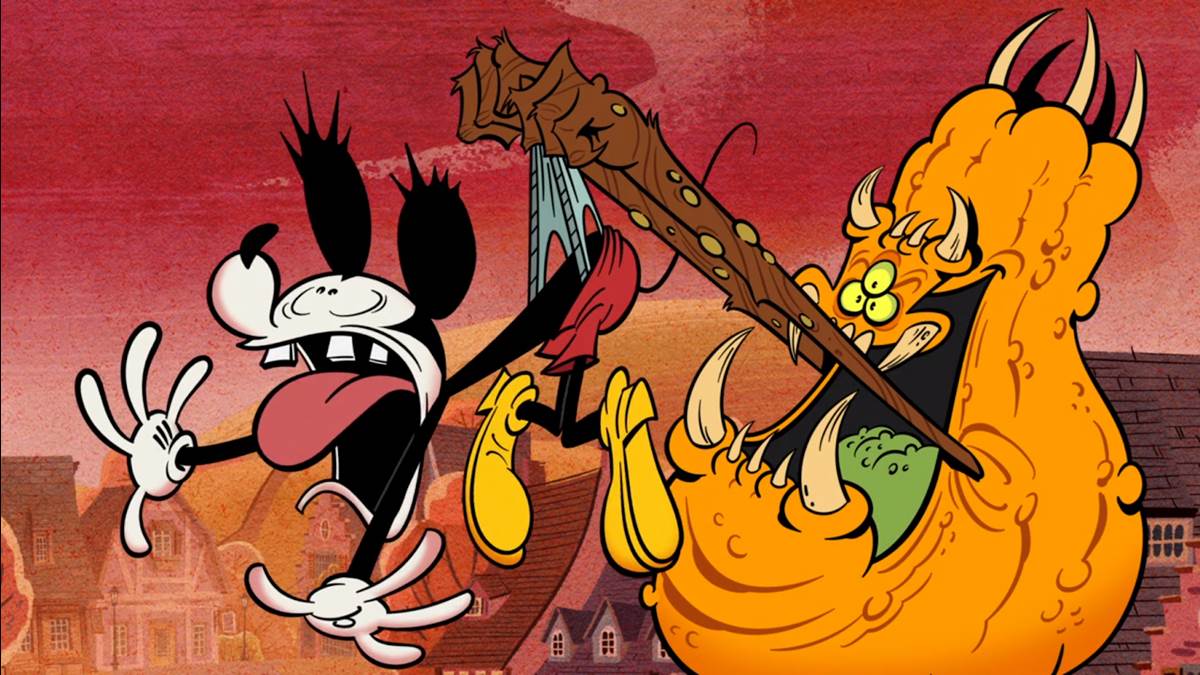 “Oh my Gourd, a giant Mickey,” Minnie and Daisy exclaim in unison as they look down and see that’s going on. The house is bulging with the syrup inside. Minnie gets an idea and opens the front door, which faces the town below the hill. The giant pumpkin has Mickey pinned on the ground and is about to drool green glowing spit onto his face. “Everyone was right,” Mickey cries, “I’m destined to be a failure.” Donald sees the syrup flowing down the hill and grabs a banana, eating it and tossing the peel behind the giant pumpkin. When it takes a step back to avoid the oncoming syrup flood, it trips backward. Mickey jumps to his feet, grabs the statue of Culpepper Mouse in the dunce cap, and stabs the pumpkin with it. The statue disintegrates, the pumpkin explodes, and the bears are released. Minnie, Donald, Daisy, and Goofy rush in to congratulate Mickey for saving the day as the Harvest Festival banner falls around him (an homage to the T-Rex at the end of Jurassic Park). Mickey looks around at Pumpkin Ridge, which has been destroyed, feeling like he “moused everything up.” But then a miracle happens. Non-threatening pumpkins begin to pop up out of the ground. Where homes were destroyed, pumpkin homes (and cars) appear. The townsfolk begin to cheer. “I never thought I’d live to see the day when a Mouse would cause good,” Ranger Woodlore says. It’s the most bountiful harvest Pumpkin Ridge has ever seen. Minnie and Daisy introduce the town to real maple syrup. 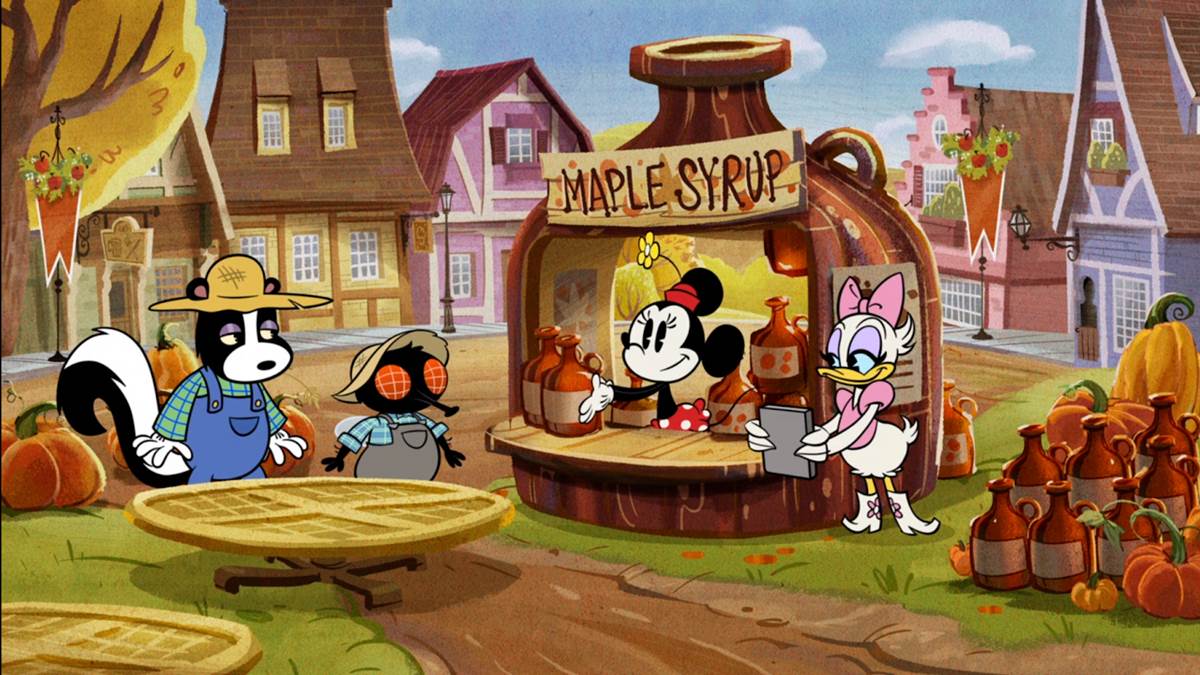 Donald wins the cash prize for the biggest pumpkin. And a statue is dedicated to Mickey Mouse for being “The greatest farmer ever.” But to Mickey’s embarrassment, it depicts him receiving a wedgie from the giant pumpkin. Up on the hill, Mickey sees the ghost of Culpepper Mouse thank him before tripping backward over a pumpkin.