You know how major three part franchises get that second installment that bridges everything together, like Star Wars: The Empire Strikes Back? Well, “For The Future” is that for The Owl House. While we got plenty of recap and exposition in “Thanks to Them,” “For The Future” gives us a brief recap of what happened in The Boiling Isles with King and the Collector before jumping back into the action and keeping the climactic part of the story going. Be advised, I do talk about the episode at length, so this is a SPOILER WARNING. To refresh, we last saw Luz, Camila (her mom), Amity, Gus, Willow, and Hunter chase Belos back into the Demon Realm and The Boiling Isles but we didn’t see what had happened on this side of the….dimension? After a bit we learn that the Collector has taken over The Isles with King at his side, turning the landscape into a post-apocalyptic playground where all the residents that can’t escape his guards become literal toys in which to play with.

Early on in the flashback though, we see Lilith and Hooty try and save King before becoming the first toys, setting up a moment that will be revealed a bit later in the episode, because we see King try and hurry back to The Owl Beast who lies in wait. As the guards have collected most of the residents in town, Eda is no exception. The full set of Coven heads also were not spared.

Luz and her friends and family make it back to the Demon Realm and head back to the Owl House to find it covered in graffiti and abandoned. It’s here where Amity finds Luz cradling her palisman egg in a nest, as well as a Clawthorne family photo that I figured would have fans of the series gushing over on the internet, but it was grossly overshadowed by later events. 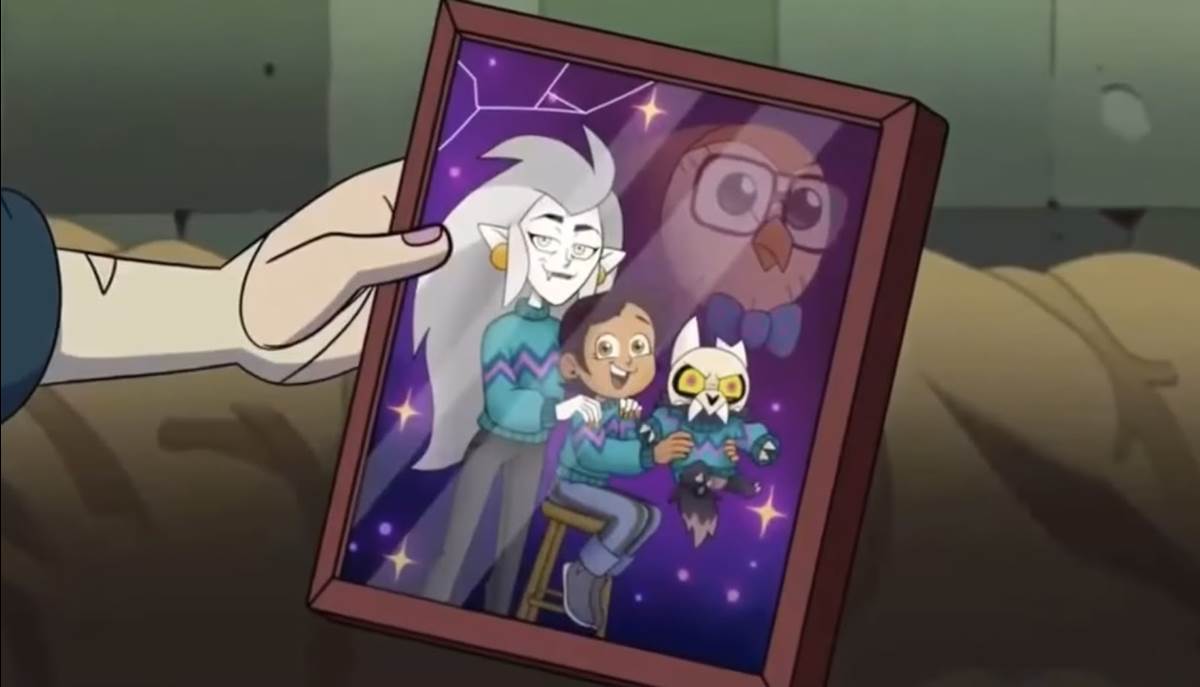 Remember, the group chased Belos through the portal so we know he’s somewhere and we finally get to see his journey but he’s weak and he’s having visions of his dead/murdered brother, Caleb. He needs to find a new host body, and fast. So he heads back to his lair full of the remnants of grimwalkers (like Hunter) to find enough to build him back into something so he can get back to the Collector.

Luz and the gang are walking through Bonesborough and see the fantasy world of the Collector play out in front of them, with Terra Snapdragon playing a performance of The Owl Beast. Terra gives up and says she doesn’t want to play anymore and is turned into another toy for the Collector’s collection, and Willow sees one of her dads turned into a toy amongst the faux crowd. She squashes her emotions, even though Camila and Gus are well aware she’s pretending to be strong to save face. King takes the Collector back to the palace. There, he suggests feeding The Owl Beast and we see Odalia, Amity’s mom, doing what she can to serve the new big bad in town. Tragically for her, she is relegated to mom duties, like making pizza bagels to feed the Owl Beast.

King helps take The Collector to bed and reads him a story from a very large tome that apparently features the rules of the Collectors. However, we are treated to some visual exposition after the Collector tells King not to read “the bad part” and has rewritten it. 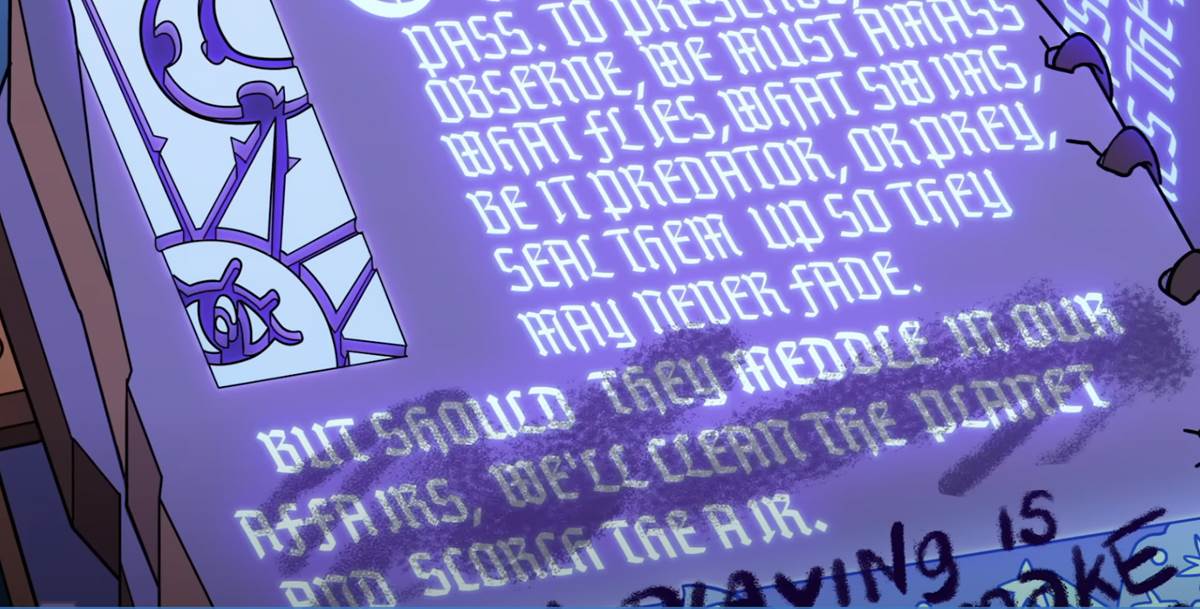 After The Collector nods off, King heads off to find all the coven heads guarding The Owl Beast. We are led to believe its a serious moment, but they’re all toys and there’s an alarm set that nearly goes off because Eda is clearly herself just trying to visit the toy Raine Whispers. While playing, the toys collected also include Toy-Hooty, which King asks Odalia to leave behind and takes back to a secret cave where Eda, Lilith, and King are plotting to take out the Collector. But, at least they know Luz is safe back in the human world…

Oh wait. She’s back here, and now they are at Hexside which has been taken over by students who were saved by the sacrifice of Principal bump. However, the new society of Boiling Isles residents are being ruled by Boscha and a new student, Miki, despite Mattholomews attempts to overthrow them. That said, Gus’s old rival takes them into a secret room (remember, the school has those), and they discuss their plots. Boscha and Miki are on to them though, and attack the group taking them into the pits of the school. Turns out, Miki is Kikimora in disguise and she brought her militant abomination with her.

Willow, stressed beyond belief can’t control her plant magic, and when separated in the pits, ends up trapping Gus, Hunter, and herself in her out of control vines. Kikimora and Luz are fighting as well while Amity and Boscha are going back and forth, with Boscha desperately trying to be her best friend again. Despite all the action packed fighting, what grabbed every fan’s attention was the moment where a frustrated and angsty Hunter overcame his own personal squabbles to save Willow. We got to see him unlock his own magic and be able to rapidly move from place to place and save Willow from herself. He tells her its okay to be upset, and he and Gus allow her to finally break down in front of them. After a hug, we finally see “Huntlow” become Canon, as the two lock pinkies and an embrace that I heard fans cheering for across the country. 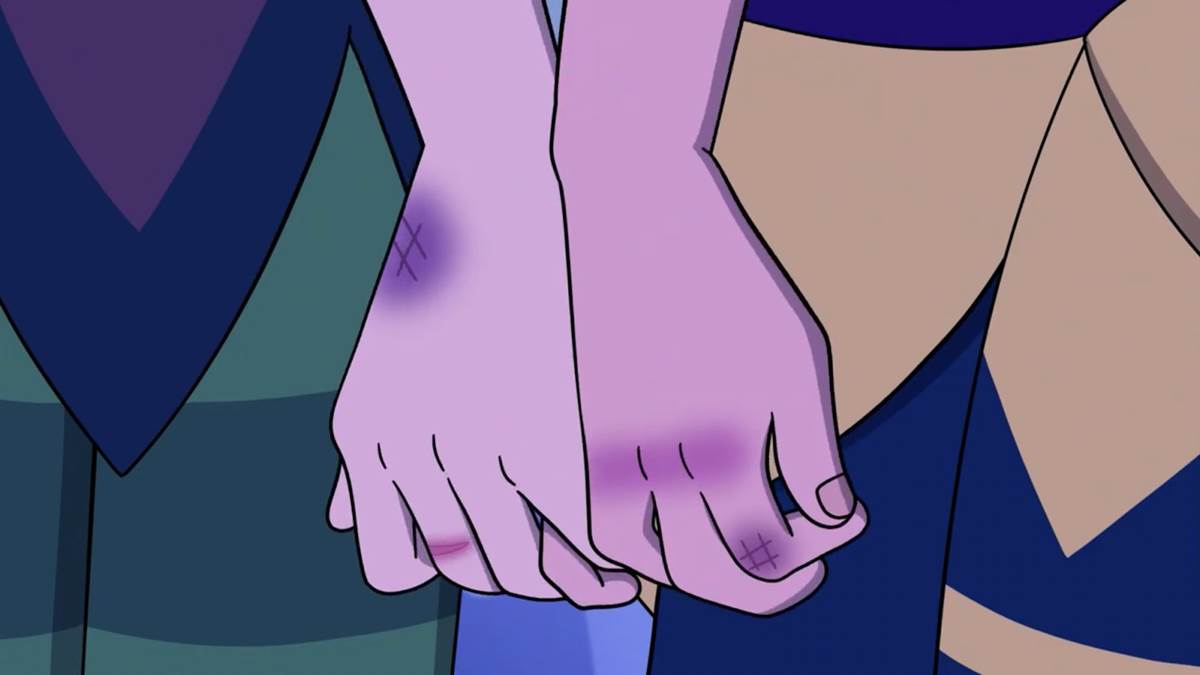 Belos makes his way up to the Collector’s palace in need of a host body, and luckily Odalia is right there and ready to oblige. Too bad it’s not her he’s after. He finds the toy-ified body of Raine Whispers and takes over their body instead, commenting it will work nicely. Why? Because then Eda will come to him? What’s the plan here, Belos? Under the guise of Raine, Belos heads to see the Collector, who senses someone is near but demands to know why they can think on their own. Belos, as Raine, tells the Collector that King is not to be trusted and he’s working against him right now, and the human (who the Collector is already quite jealous of) is back and there to help him with his plan. The collector doesn’t believe it, and spies on King.

Out in the forests, Luz and Camila are still being hunted by Kikimora but get a moment to have a heart to heart. There, Camila lets her inner nerd out while telling Luz she can stay in the Demon Realm and doesn’t have to come home. As the emotions are coming out, her Palisman egg comes to life as Luz is finally saying something from the heart – that she wants to be understood. Right as the egg hatches, Kikimora is alerted to their location. She comes to attack and the suspense is not from the fighting, but all the action – as beautiful as it is – is overshadowed by Luz’s staff and glowing orb which has yet to reveal her palisman form.

The whole team reunites and takes on Kikimora. After teleporting using a spell that was retrieved from Luz’s memory, they get away right as Kikimora launches an explosive their way. Safely in the Titan’s skull, we finally get what we’ve all been waiting for and find out what animal Luz’s palisman is. It also seems that show creator Dana Terrace and her team pay attention to fan theories and literally threw every idea out there, echoed by the characters (I was a believer in the Snake theories myself), and finally it’s revealed: Luz’s Palisman is a Snakeshifter, and she named it Stringbean. 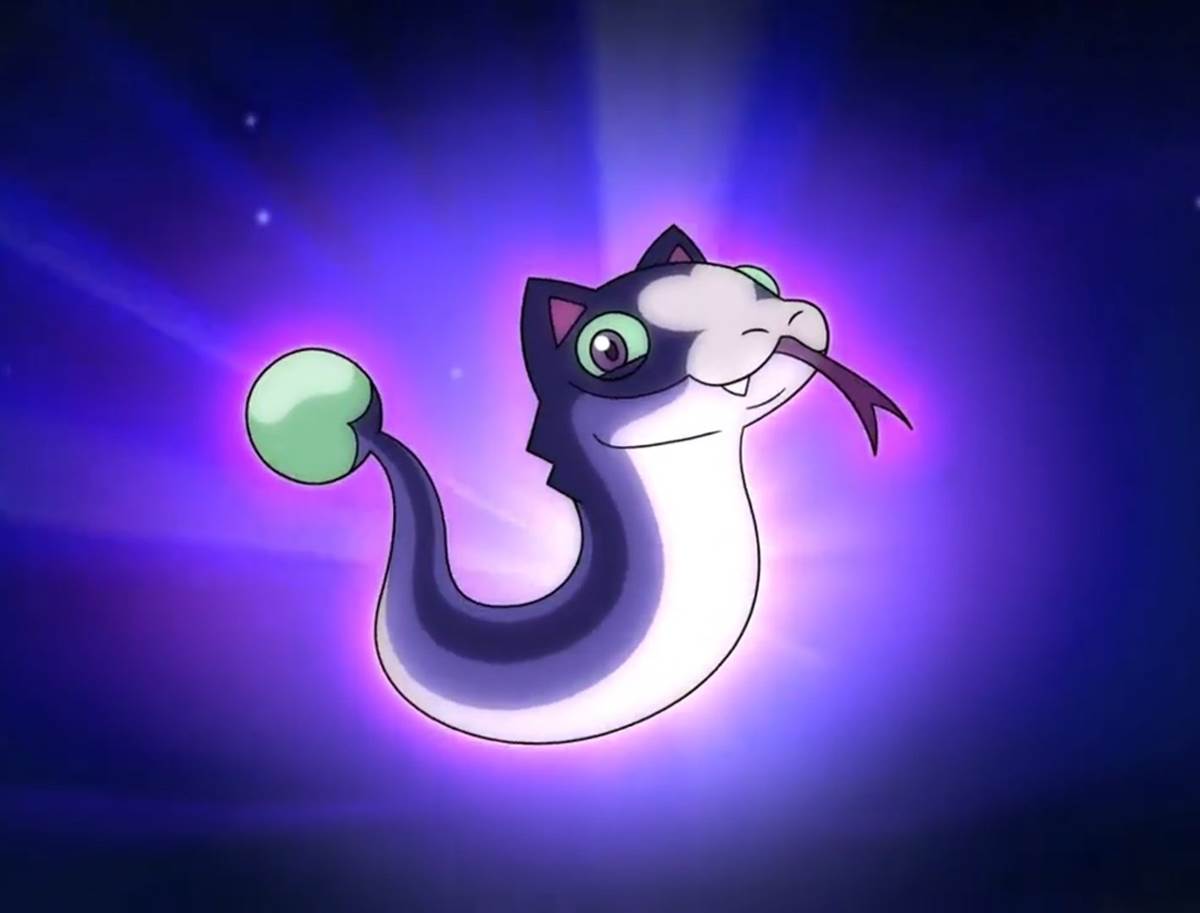 It’s only a shame that this moment happened while Belos/Raine was turning the Collector against King. After seeing what he thought was a moment in which King was defending him, The Collector then sees a full plot drawn out by King, Eda, and Lilith to overthrow him. Then who shows up nearby, Luz and her friends, buying right into Belos’ scheme. It’s at this point that The Collector grows so upset that he decides to play a new game and snaps his fingers once again, ending the episode. 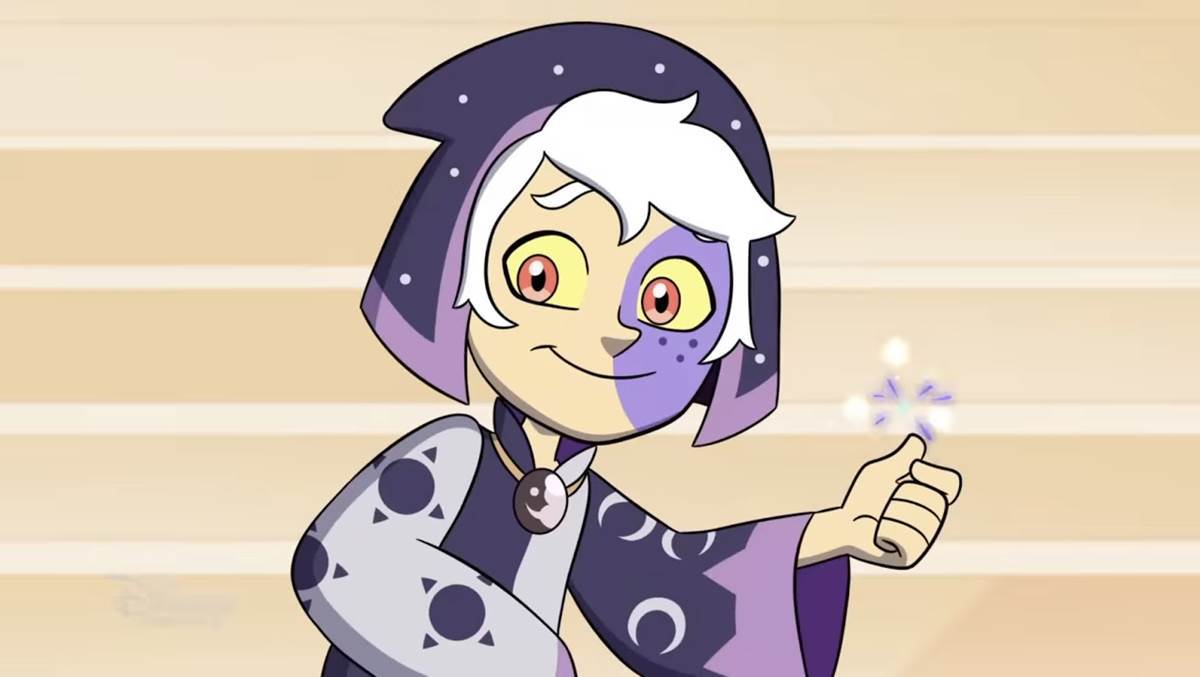 Like any good middle portion of a trilogy, we saw more of the story develop at the same time giving us more questions than we thought we’d have and a full cliffhanger to ride out the next few months with. As of right now, there is no date for the third and final episode of the season that concludes the series.

Earlier today, creator of The Owl House, Dana Terrace, took to Instagram to showcase a picture of herself alongside Sarah Nicole Robles (voice of Luz) at their first recording session, followed by a picture five years later taken yesterday (January 20th, 2023) at what she said was the FINAL voice recording session for the series. The finale is just around the corner and I can’t wait, but I’m still not ready for this wonderful series to be over.