This week, Laurence Fishburne’s 1995 thriller Bad Company forces the audience to question if anyone is good in the corporate world. The answer is no! 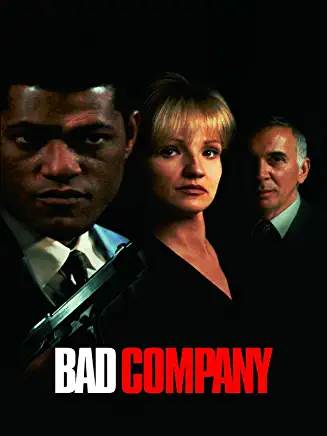 Nelson Crowe is hired by a shadowy organization called “The Toolshed” which facilitates corporate espionage, bribery, and a little murder. This off the books organization is run by Vic Grimes and Margaret Welles, which is the envy of the CIA.

Crowe easily gains a position with “The Toolshed” and soon we learn that Crowe is working for the CIA to clear his debts to the company, while helping the intelligence agency to take over the under the radar “Toolshed” so that the CIA can commit more chicanery off the government books.

Double crosses, with the bribery of a state supreme court justice, Judge Beach, as well as triple crosses, lead Crowe into a battle for his life. Though he has started a passionate relationship with Margaret, can she be trusted? Will the CIA absolve Crowe of his debts, or will they double cross their own insider?

In the world of espionage, friends are not really friends, and Nelson Crowe must watch out for himself, before he is betrayed.

Laurence Fishburne is the essence of cool in every scene of this film. His Nelson Crowe is a unique character because we know that he’s not a good guy, but the audience will root for Crowe to succeed because of the powerful presence that Fishburne brings to the role. This is a run of the mill spy thriller, but with Laurence Fishburne in the lead role, the audience is in for a treat because this man is such an unstoppable force you won’t want to take your eyes away from the screen.

Ellen Barkin and Frank Langella are the perfect opposition to Fishburne. They play less than reputable people, and while their characters are crucial to the story and help push the plot along, Barkin and Langella give Margaret and Vic the precise qualities of slime and duplicity that the audience knows to never trust them.

David Ogden Stiers as the Supreme Court Justice doesn’t get much screen time, but a masterful performer like Stiers makes the most of his scenes. He adds a level of depth to the judge that might have been missed had any other actor been cast.

Spalding Gray as the sniveling CEO could not have been cast better. Gray plays the perfect corporate weasel.

Michael Beach gets a lot of room for his supporting character Tod, but I would have liked to have seen just a couple more scenes for Beach.

Bad Company is the standard run of the mill espionage film. If you are not a fan of this genre, then you may want to skip it.

Bad Company may have been a box office and critical dud, but I thought this film is a hidden gem of the Touchstone Pictures vault.

There is a certain level of suave cool that Fishburne projects on screen that makes his character Nelson Crowe likable. The fact that Crowe is a very dangerous man, with little to no morals juxtaposed with his brash personality is what makes this film incredible.

Bad Company has an otherworldly cloud about the film. One can be certain that there are stories like this taking place in this world every day. They are on the fringe of society, between big business, espionage, and powerful people.

What particularly makes me recommend this film is the stunning ending that I never saw coming. Rarely does the ending surprise me, and wow, Bad Company shocked me.

Bad Company gets a 3 Reels rating. Make some time to see this film, you will enjoy it.

Next week a high seas adventure with the Chris Elliott nautical comedy, Cabin Boy. Believe it or not, the film is not well regarded in critics circles, and in most audience opinions.