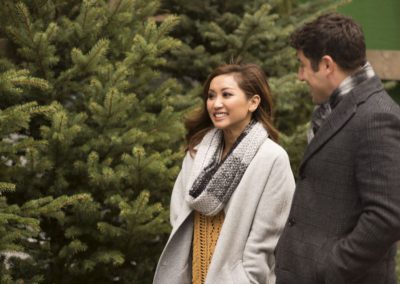 Christmas is a season of giving and while the emphasis is often on the materialistic qualities, the spirit of the season is really about helping others and giving back. This same theme can be found in many classic Christmas films like It’s a Wonderful Life, Miracle on 34th Street, and even Home Alone. It’s sometimes a hard lesson to learn, but that’s just what Brenda Song needs to do in a new Freeform film, Angry Angel, debuting as part of the countdown to the 25 Days of Christmas.

It’s been about six years since I’ve seen Brenda Song in anything. I was familiar with her Disney Channel work as London Tipton in The Suite Life series and her DCOM work, but this was the first time I’ve seen her play an adult since her brief part in The Social Network. It’s great to see her again and in the same way the Melissa Joan Hart/Joseph Lawrence ABC Family film My Fake Fiancé lead to the series Melissa & Joey, I hope this leads to more projects for Song on Freeform. 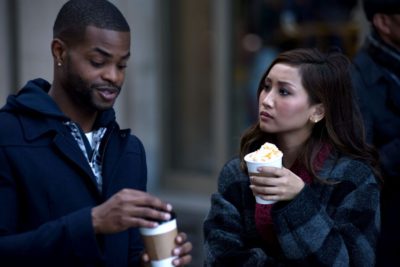 Brenda Song plays Pike, a young married woman who passed away too soon from cancer. While she was good, she wasn’t quite good enough to go directly to heaven, so she is forced to become an angel. In this film, angels live on earth and help others in order to earn enough points to pay their way into heaven. And because this is Freeform, there’s an app to keep track of your points and find people in need. It’s like a Tinder or Grindr that connects you with people who need your help instead of your booty.

However, Pike is emotionally checked out of everything she does. Being a resident on earth, she still has to keep a job and pay her rent, despite the fact that she can’t die (again) and her new, beautiful body is impervious to any ramifications, despite her bad eating habits and lack of exercise. She has a hunky boyfriend who actually wants a relationship, but she isn’t willing to give him anything more than physical intimacy. In other words, she’s got a lot to learn.

While Brenda Song is charming and likable, Pike is hard-to-love until the third act. To keep viewers interested, the story has a few flashbacks to her previous life. However, appearances by her mentor, Jason Biggs, are where the few moments of true comedy come in. Jason Biggs plays Jason Biggs, as most celebrities are angels, and like James Van Der Beek in The B in Apt. 23, Biggs references his career’s highs and lows repeatedly and portrays a larger than life version of himself. 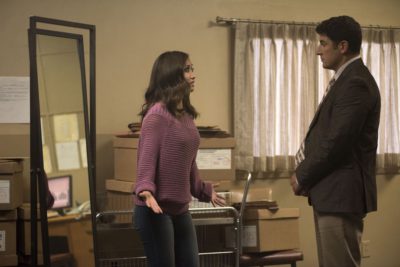 In addition to borrowing from ABC’s The B in Apt. 23, the film’s main plot borrows heavily from a late 90’s Wonderful World of Disney TV movie starring Kirstie Alley called Toothless. In that film, Alley played a deceased dentist whose purgatory sentence transformed her into the tooth fairy. However, in that film the ramifications for getting out of line meant a lifetime sentence to H-E-double hockey sticks (another Wonderful World of Disney film from that same era). In Angry Angel, getting out of line simply resets your points. Essentially, being forced to be an angel is the worst case scenario after death, which creates some low stakes if Pike doesn’t get her priorities in order anytime soon.

The most intriguing part of the plot comes from a rule that angels are not allowed to revisit anyone from their previous life. So when Pike bumps into her former husband, the film becomes very interesting and allows Song to convey some real raw emotion in her performance. She’s quite the actress and Angry Angel really showcases some of her abilities that went unseen in past Disney projects.

Despite some groan-worthy dialogue and a few sexual innuendos that feel forced and inserted just because this is Freeform, I quite enjoyed Angry Angel. The film debuts on November 27th and is being touted as the network’s first original Christmas movie. If you miss the premiere, you can also catch reruns during Freeform’s 25 Days of Christmas on the following dates:

I give Angry Angel 2.5 out of 5 points to get into heaven.