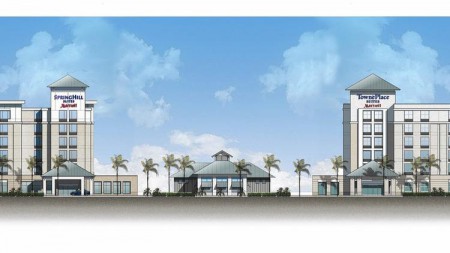 The Orlando Sentinel is reporting that ground will being broken on October 16 for two Marriott hotels at Disney’s long delayed Flamingo Crossings Project. The two hotels, TownePlace Suites and SpringHill Suites will have 500 suites and should be open by January 2016.

The report indicates that the new hotels will cater to sports teams participating in tournaments at the ESPN Wide World of Sports Complex. The common recreation area will feature two batting cages, a basketball court, and a practice field to entice visiting teams to stay in the resort area.

Flamingo Crossings was announced in 2007, but was delayed due to the economic downturn. Upon build out, the 450 acre project is expected to feature 5,000 hotel rooms and 500,000 square feet of retail space.